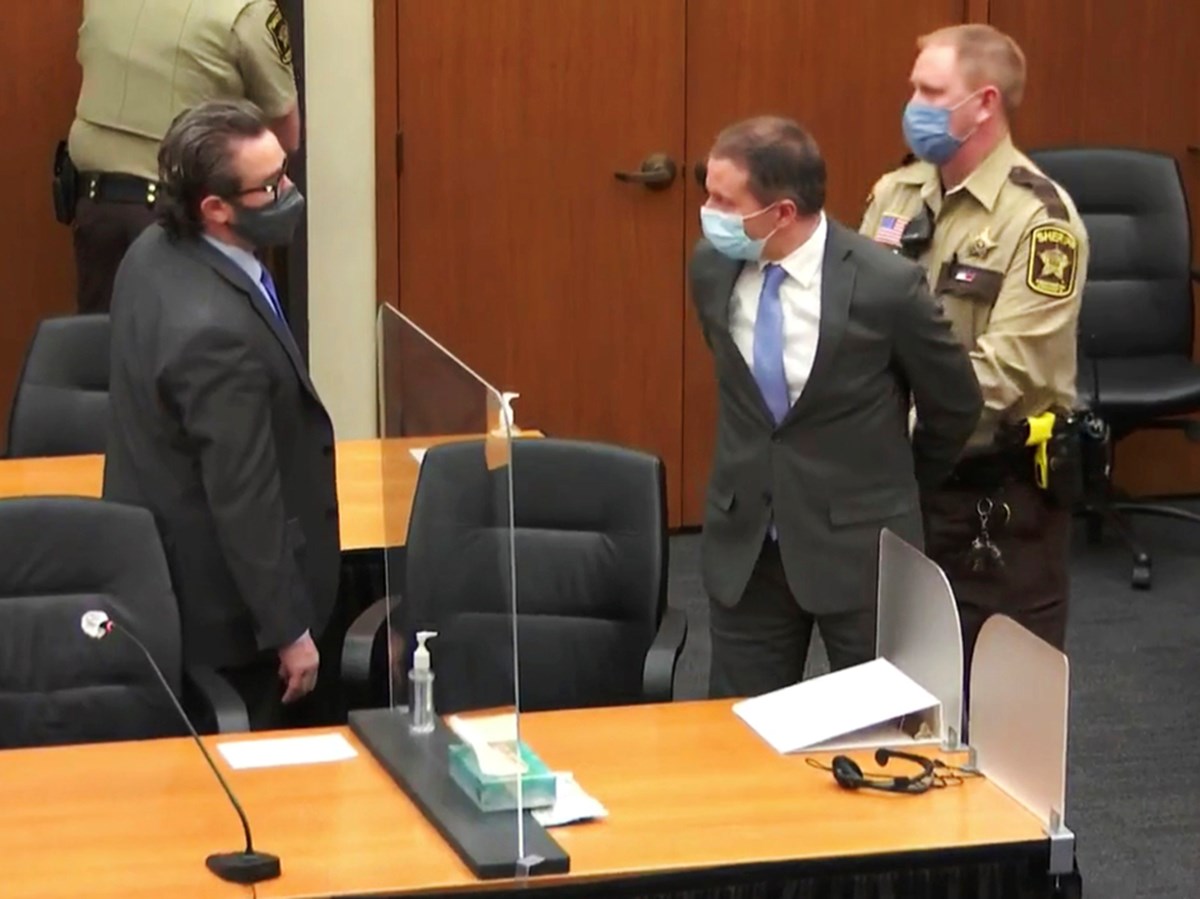 Former Minneapolis police officer Derek Chauvin is taken into custody as his attorney, Eric Nelson, looks on after the verdicts were read on Tuesday at Chauvin's trial for the 2020 death of George Floyd.

The jury has found former Minneapolis police officer Derek Chauvin guilty on all the counts he faced over the death of George Floyd. The trial has been one of the most closely watched cases in recent memory, setting off a national reckoning on police violence and systemic racism even before the trial commenced.

With only his eyes visible as the rest of his face was hidden behind a surgical mask, Chauvin watched as the verdict was returned. Judge Peter Cahill thanked the jury members for their "heavy-duty jury service." Chauvin was remanded into custody as the jury was dismissed, and Cahill said sentencing is expected in eight weeks.

State sentencing guidelines recommend 12.5 years in prison for a conviction on unintentional second-degree murder for someone with no criminal history. But prosecutors could seek a sentence up to the maximum of 40 years on that count if Cahill determines there were aggravating factors.

A deputy handcuffed Chauvin and escorted him to a side room.

Philonise Floyd had been seen praying in the courtroom. Asked by a pool reporter afterward what he had been praying for, he answered: "I was just praying they would find him guilty. As an African American, we usually never get justice."

There was no noticeable reaction from the jury, according to a pool reporter. The jurors each remained still and quiet, staring at the judge until they were called upon to announce their judgment.

The jury had been deliberating for about 10 hours over two days, following closing arguments. 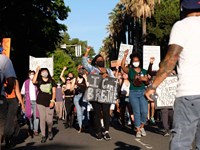 Background: The Killing Of George Floyd, Trial Of Derek Chauvin

Floyd's death on Memorial Day 2020 sparked protests in Minneapolis, across the United States and around the world. It prompted calls for police reform and soul-searching on issues of racial injustice.

Floyd was a 46-year-old Black man from Houston who had moved to Minnesota three years earlier. He was a father and brother who idolized his mother, loved making music and had been a star athlete as a young man.

Floyd died after Chauvin pressed his knee on Floyd's neck for 9 minutes and 29 seconds as Floyd lay facedown, hands cuffed behind his back. 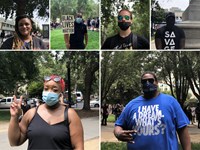 Judge Peter Cahill presided in the case. Known as being fair and decisive, Cahill made the unusual decision to allow the trial to be broadcast live.

The prosecution argued that Floyd died as a direct result of Chauvin's actions: that due to Chauvin's weight on Floyd's neck and back while holding him in the prone position, Floyd died of low oxygen levels that caused a brain injury and arrhythmia, causing his heart to stop.

"He did what he did on purpose, and it killed George Floyd," said prosecutor Steve Schleicher.

Testimony in the case was remarkable in that witnesses for the prosecution included numerous members of the Minneapolis police. Minneapolis Police Department Chief Medaria Arradondo and other members of his department testified that Chauvin's lengthy restraint of Floyd was not reasonable and violated the department's policies on use of force.

"There is an initial reasonableness in trying to get him under control in the first few seconds," Arradondo testified, "but once there was no longer any resistance, and clearly when Mr. Floyd was no longer responsive and even motionless, to continue to apply that level of force to a person proned out, handcuffed behind their back — that in no way, shape or form is anything that is by policy, is not part of our training and is certainly not part of our ethics or our values."

Chauvin's defense, meanwhile, argued that there was a range of potential factors in Floyd's death, including what it said was Floyd's enlarged heart, fentanyl and methamphetamine in his system and possibly carbon monoxide from squad car exhaust.

Above all, defense attorney Eric Nelson strove to inject doubt into the state's case. He framed Chauvin's actions as those of a "reasonable police officer" doing his job under stressful and chaotic circumstances.

The testimony ranged from complex medical and forensic pathology topics to discussion of police training and officers' use of force. There were moments of deep emotion, including from bystander Charles McMillian and the young woman identified in court as Darnella, who was 17 when she took video of the incident.

Hennepin County's medical examiner, Dr. Andrew Baker, testified that Floyd died from cardiopulmonary arrest resulting from "law enforcement subdual, restraint and the neck compression." He said the manner of death was "homicide," meaning that someone else was involved in the death.

Compared with the prosecution, the defense's testimony was brief. Defense attorney Nelson called just six witnesses, including a retired Minneapolis police officer and a retired paramedic who had interacted with Floyd during a 2019 traffic stop.

The defense spent the most time questioning Dr. David Fowler, a retired forensic pathologist who testified that Floyd died from a sudden cardiac event and that opioids and methamphetamine in his system and possibly carbon monoxide poisoning played a role. He disputed the Hennepin County medical examiner's judgment that the manner of Floyd's death was "homicide" and said that it should have been classified as "undetermined," given the number of factors in play.

In the opinion of Baker, the medical examiner, "the law enforcement subdual, restraint and the neck compression was just more than Mr. Floyd could take, by virtue of those heart conditions." While fentanyl and heart disease may have contributed to Floyd's death, they were not the direct cause, Baker said.

Other medical and forensic witnesses called by the prosecution agreed.

"Mr. George Floyd died from a cardiopulmonary arrest. It was caused by low oxygen levels. And those low oxygen levels were induced by the prone restraint and positional asphyxiation that he was subjected to," testified Dr. Jonathan Rich, a cardiologist.

Floyd's brother, Philonise Floyd, described their Houston childhood and told the court about how Floyd "was a leader in our household." Floyd's girlfriend, Courteney Ross, described her affection for him and their mutual struggle with opioid addiction.

Third-degree murder is causing death to an individual by "perpetrating an act imminently dangerous to others and evidencing a depraved mind without regard for human life," but without the intent to cause death. It carries a maximum sentence of 25 years.

Second-degree manslaughter is causing the death of another by "culpable negligence, creating an unreasonable risk" in which the defendant "consciously takes the risk of causing death or great bodily harm to another individual." It carries a maximum sentence of 10 years.

The names of the jurors are not known. But we do know that the jury was significantly less white than Hennepin County itself.

The 12 jurors include four Black people, two people who identify as multiracial and six white people. Two alternates — both of them white women — have been dismissed.

The jury reported each day for duty to the Hennepin County Government Center under intense security measures, using a private entrance to enter the court.

The jurors were given a laptop and monitor to review the extensive video footage and exhibits presented during the trial.

"Use your common sense. Believe your eyes. What you saw, you saw," prosecutor Schleicher told the jury.

If the state is "missing any one single element" to meet the burden of proving Chauvin's guilt beyond a reasonable doubt for each of the three counts, "it is a not-guilty verdict," defense attorney Nelson told them.

On the Sunday before the last week of testimony, another Black man was killed at the hands of police in Hennepin County. Daunte Wright, 20, was fatally shot by Brooklyn Center officer Kim Potter during a traffic stop. Potter, who says she mistakenly fired her gun instead of a Taser, resigned from the force and has been charged with second-degree manslaughter.

Former President Barack Obama and former first lady Michelle Obama drew a straight line between the deaths of Floyd and Wright: "The fact that this could happen even as the city of Minneapolis is going through the trial of Derek Chauvin and reliving the heart-wrenching murder of George Floyd indicates not just how important it is to conduct a full and transparent investigation, but also just how badly we need to reimagine policing and public safety in this country," they said in a statement.