Black and Latinx Californians are under-represented among those who have received the COVID-19 vaccine, early numbers from the California Department of Public Health show.

Roughly 6.2 million COVID-19 vaccine doses have been administered in California. So far, that’s mostly been people in priority groups like health workers, long-term care facility residents and people over 65.

And just 16% of the shots have been given to Latinx residents — despite that group making up nearly 40% of the population according to the census. 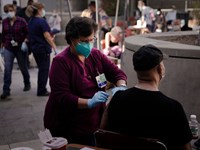 The state data is incomplete — 12% of vaccine recipients identified as a race labeled “other” and nearly 9% declined to give their race.

“That leaves a big gap and possibly masks more serious disparities,” said Kiran Savage-Sangwan, executive director of the California Pan Ethnic Health Network. “We should have much closer to a full representation of our race/ethnicity data than we do.”

The network has done its own analysis of the racial breakdown of California’s health workers and seniors using data from the U.S. Census Bureau, and their early estimates show about 5.5% are Black and 23% are Latinx.

From the start of the pandemic, health equity experts feared Black and brown Californians would be left out of COVID-19 vaccine roll-out due to technological barriers, limited health care access and distrust of the medical system.

Black and Latinx Californians are experiencing the state's highest rates of death from the virus, and Latinx residents have disproportionately contracted the virus compared to other groups.

California has a Community Vaccine Advisory Committee that has helped draft the priority groups for the vaccine roll-out. So far race, income and ZIP code have not been selected as factors for determining who’s eligible for doses.

Rhonda Smith, executive director of the California Black Health Network, says she’s part of a small subgroup from that committee that’s been trying to elevate equity discussions in the vaccine distribution plan.

She’s also advocating for more education around the vaccine, and for giving doses to community health centers. 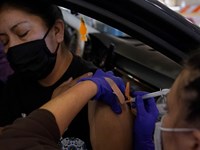 “There still is a degree of hesitancy towards the vaccine and not a very high level of confidence,so that may be driving individual behavior,” she said. “If we’re talking 65 and older there may be some access issues in terms of being able to navigate through the process of making an appointment.”

Smith says giving doses to community health centers in impacted neighborhoods would go a long way toward leveling the field.

“I don’t know that every community has a CVS or Walgreens that they can walk to or get to very easily,” she said.

The California Department of Public Health said in a statement that the data underscore the “need to better reach disproportionately-affected communities” and that “equity is a pillar” of the vaccine strategy. They said that would include building a network of providers to serve these communities and working with trusted community messengers to distribute information about the vaccine.