As COVID-19 cases skyrocket across California, rural areas are getting hit hard. Many are the same places grappling with widespread resistance to public health measures like mask wearing and social distancing — and elected officials who can be quick to flout statewide guidelines. But the increase in cases is taking a toll on frontline workers, public health officials, and community well being.

Rashelle Harig is a nurse at Adventist Health in Marysville, where she runs the hospital’s professional practice committee for the California Nurses Association. She has seen more people come to the hospital with COVID-19 who need medical attention, at a time when she says the hospital has already been asking for more from nurses.

Harig says she and other nurses are being asked to reuse protective equipment in hopes of avoiding a future shortage, even though they have enough to go around right now. She worries about what that means for the health of nurses and patients. Yuba County is in the most restrictive purple tier, with a 16.2% case positivity rate, among the highest in the state.

Governor Gavin Newsom announced a new stay-at-home order yesterday, based on regional hospital and intensive care unit capacity. The order divides the state into five regions, and takes effect when a region’s projected ICU capacity reaches 15%. Officials say the restrictions were put in place to ease the burden on healthcare workers across the state and avoid overwhelming hospitals.

Harig believes staffing is a concern, as she says several of her colleagues have left the hospital in the past couple months, burnt out by the ever-growing workload. That comes after the hospital laid off several employees in April under the financial strain of the pandemic.

Additionally, several dozen employees are quarantining after potential exposure to the virus, according to a KCRA report.

The hospital did not immediately reply to CapRadio’s requests for comment.

Harig manages the demands of work with a rigorous dedication to taking time for herself. Daily 30 minute workouts are her “savior,” and she makes sure to call her 26-year-old son in Minnesota once a week.

Many people in Yuba County and surrounding areas have rejected mask wearing and continued to gather, even as case counts climb.  That can be frustrating to see, but Harig says it’s something nurses are relatively accustomed to.

“As a nurse, you see people make choices that aren't healthy for them often,” she said. “And then you still care for them and do your best to help them no matter what.”

Further north, Shasta County faces a similar situation, where a surge in September thrust the area into the purple tier of the statewide tiered reopening system. Case counts have continued to climb, as the county reports an average of 53 new cases a day and grapples with a 9.9% case positivity rate.

The county has enough hospital and ICU beds to manage for now, but the consistent stream of positive cases is putting a strain on healthcare workers. The northern California region has an ICU capacity of 18.6% — currently the lowest in the state.

“We're pulling our staff in directions they've never been pulled before,” said Robert Folden, the executive director of Mercy Medical Center Redding. “And we're caring for a disease process [that’s] different. And it's new, and sometimes it's scary.”

Public health officials across northern California are feeling that pressure, too. They are scrambling to keep up with an ever accelerating crisis, and growing resentment for the measures they know can help slow the spread of the virus.

Danette York, the public health director of Butte County, described the mood as “frantic.” There are 4,244 reported cases of COVID-19 in the county, where sixty people have died of the virus. The county saw a sharp spike in cases in late August, and the numbers continued to climb since.

“At this point, we recommend that the general public, just assume that everywhere they go, they could be exposed,” York said.

York says the county health department is racing to keep up with contact tracing, but there is only so much they can do with limited resources.

It’s a similar situation in Shasta County, according to Robin Schurig, the public health branch director. Schurig said during a media briefing this week that the public health department lacks the resources to comprehensively contact trace every case, and despite repeating messages about the importance of mask-wearing and social distancing, many refuse to comply.

“We're in some of the top rates in the state and that is not a goal that we should try and achieve,” said Dr. Karen Ramstrom, the county health officer. “We can turn this around, and they’re pretty simple practices.”

Butte, Shasta, and Yuba counties all fall in legislative districts of state representatives who are pushing for more local control over the pandemic.

Assemblymember James Gallagher (R–Yuba City) and Senator Brian Dahle (R–Bieber) were among a handful of elected officials to convene a conference of county-level representatives out of frustration at statewide public health measures that they feel do not reflect the needs of and realities in rural counties.

Taking a Toll on Communities

Consensus is rare in communities across northern California where case counts continue to climb. In Shasta County, leaders like the Sheriff Eric Magrini have made it clear they won’t issue citations to people or businesses violating mask wearing, social distancing or curfew rules. Instead, officers will focus on education alongside the public health department.

That frustrates some of their fellow elected officials, who see the softer approach to enforcing the rules as amplifying both the risk and tension in the community.

“That causes divisiveness in our community,” said Janice Powell, who serves on the Shasta Lake City Council of Shasta Lake, where she was previously the mayor. “We don’t need that in the middle of this pandemic.”

That divisiveness is something Robert Brown has had to learn to live with. Brown is a trustee on the Shasta County Board of Education and lives outside Redding, where a strong contingent continues to protest business closures and mask wearing at Board of Supervisors meetings.

“It's a very emotional issue,” Brown said. “It's not something people can be rational about. So it's difficult even just to talk to, you know, our friends and neighbors. If they're not, they're not following the same sort of protocol that we're following.

While Brown struggles to understand the vocal protest around mask wearing and business closures, he worries about the economic future in the county. Small businesses are struggling, and many individuals are relying on unemployment benefits, surviving paycheck-to-paycheck. Brown hopes the federal government can negotiate some kind of financial relief, soon.

Leslie Pace in Plumas County shares that concern about what the next couple of months will bring — and is eager for more relief. She started a nonprofit farm in Quincy called Lost Sierra Food Project with Jessie Mazar two years ago.

The pandemic increased business for them as more people turned to local suppliers early on. Wildfire smoke interfered with the peak of harvest season in August and September, but most concerning for Pace now is how they’ll be able to fund their work next year with grants being largely postponed.

As a nonprofit, the farm relies on funding from philanthropic organizations to make ends meet. Pace and Mazar raised money on GoFundMe and through partnerships with the local college to make it through 2020, but without an injection of grant funding, they aren’t sure what the financial picture looks like for next year.

“We may be stepping into the same thing or a bigger mess,” Pace said. “I’m not super optimistic that once 2021 hits that everything is going to be OK.” 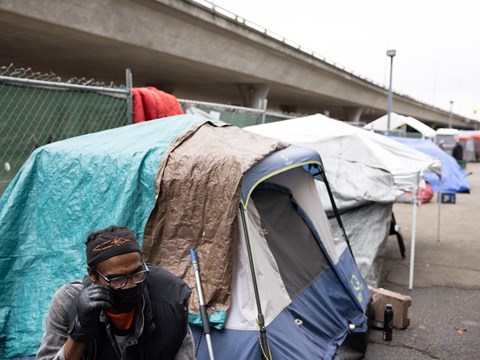