From Food Banks To Honor Fridges, Rural Sierra Communities Get Creative To Feed Themselves

Rugged Roots Farm sits just off Route 70 in Plumas County a few minutes past downtown Quincy. The first thing you see when you drive up is an old, buzzing refrigerator.

“We wanted it right up at the front so when people drive up it’s the first thing they see,” said Leslie Pace, co-director of the farm.

She started last year. The farm is a program of the Lost Sierra Food Project, a nonprofit she started with Jessie Mazar to address food justice and food security in Plumas County. 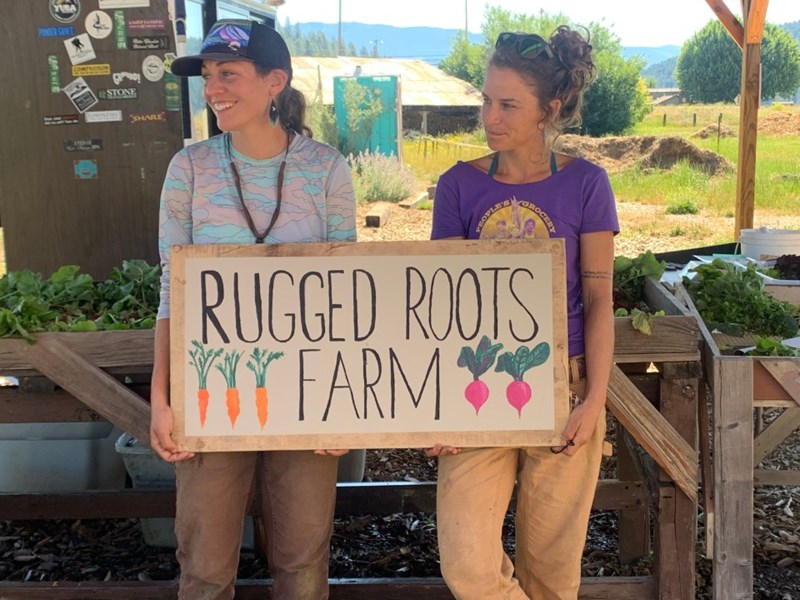 Mazar and Pace pack the fridge full of farm-fresh produce most days of the week. The shelves display butterhead and red lettuce, two types of carrots, chard, turnips, kale and radishes. There are a variety of herbs.

“Our mixed greens are really popular. Usually we fill both shelves with that,” Pace said.

The women call it the Honor System Fridge. Customers record what they’ve taken and how much it cost in a notebook and they add up the totals regularly. So far, everything has been paid for. But more so, the fridge has been a rare reliable source of fresh produce in Plumas County during the coronavirus pandemic.

In Plumas and Sierra counties, food banks and food pantries are seeing their numbers double and triple. Grocery stores are struggling to keep up with demand. And many people are getting creative to meet the needs of their community.

Mazar and Pace expected to sell maybe $50 worth of produce out of the fridge a week when they first tried it out. So far, they’ve been selling hundreds of dollars a week, something both women attribute to increased demand and interest in local food due to COVID-19. And they’ve adjusted operations at the farm to keep up.

“We definitely are growing more food than we were planning,” Mazar said. “We were going to grow one acre and then we doubled that.”

Tammy Muldoon runs the High Sierra Family Resource Center in the Sierra County town of Loyalton. In a typical week 60 or 70 families would come to pick up free food.

“After COVID, we had about 140 families that we were seeing in like April, May, June,” Muldoon said.

That increase is partly due to financial pressures, but Muldoon attributes it mostly to more people meeting their food needs locally. Pre-pandemic, many Loyalton locals drove to Reno, Nevada to stock up at big box stores. But fewer people are doing that these days, especially senior citizens. There is one grocery store in Loyalton, but isn’t equipped to manage all the local need.

“It's a small town and the prices are high. They might not have what you want. And they certainly don't have bargain food,” Muldoon said.

Megan Mansfield has seen the same shift in how people are getting their food on a county-level. She’s a Health Educator at the Plumas County Public Health Agency. More people wanted to shop locally rather than cross state or county lines to buy food. That put a lot of pressure on supply chains. So did more people turning to the few big box retailers in Plumas County from other parts of California.

“Our grocery stores were empty,” Mansfield said. “Especially fresh fruits and vegetables, and whole grains, as well as meat and dairy. We were out for quite a while.”

Throughout Sierra and Plumas Counties, people have been turning towards food banks and food pantries. Mansfield says the pandemic has put a magnifying glass on an issue that's already been very present.

“We are not food sovereign here. We do not have enough food to last all of the people in this county a week if a bigger disaster hit and we couldn't import our food here. That's really scary,” she said.

That’s the same issue that Jessie and Leslie are trying to address with the Lost Sierra Food Project by growing food for Plumas County, in Plumas County. 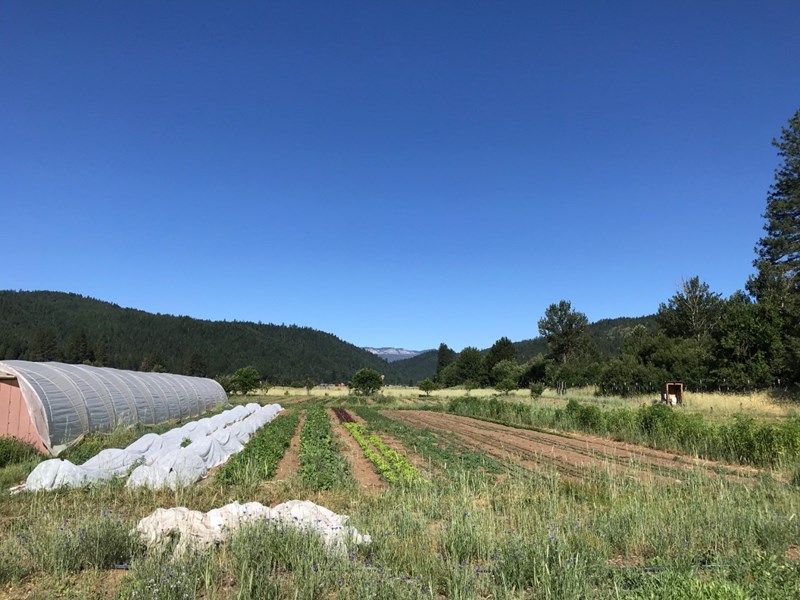 The national forest surrounding Rugged Roots Farm is part of what drew Leslie and Jessie to the area.Nina Sparling

“Our goal was to make local food something that people in our community can access,” Mazar said.

The fridge is one of a handful of ways the pair have been working to get their food to the people who need it most. They offer a weekly produce box at a range of prices: full price for the season for those who can afford it, reduced price for CalFresh recipients, or free in exchange for nine hours of volunteer work on the farm over the course of the season.

Shawn and Gabriella moved to the area in February to work at an outdoor education nonprofit. The roommates found themselves unemployed within weeks. Soon, they found out about Rugged Roots Farm and started showing up every week to help harvest.

“And it definitely provides a sense of security as we're trying to navigate unemployment," Shawn said.

Shawn comes to the farm a few times a week. They love the free produce, but volunteering has also been something to do during the pandemic.

“Last week, we harvested radishes and all these were like little baby radishes. Now they're huge. It's really cool to see the progress,” Shawn said.

Like with the fridge, many more people have signed up to volunteer on the farm in exchange for fifteen weeks of free produce than Mazar and Pace expected. The pair are acutely aware of the fact that there are a lot of lower income people in Plumas County.

“Doing this project, a big part of it was making sure that most of our community can have access to the produce that we're growing,” Mazar said. The women have partnered with Mansfield at the Plumas County Public Health Agency to support their work, too.

Responding to the immediate needs of the pandemic is part of what Mazar and Pace hope the farm can do, crisis or not.

Tessa Paoli contributed to this report.