If you visit Grant High School in the afternoon, after the last bell rings at 2:30 p.m., you’ll have no trouble finding which classroom the drumline practices in: Just walk toward the beats.

On a recent weekday, about a half-dozen kids, mostly girls, are pounding on snare, bass and tenor drums while watching for direction from their teacher, James Van Buren, or “Mr. V,” as the students call him.

Van Buren — who’s playing a melody line on a portable keyboard — stops the kids and gives them some instruction.

“Don’t forget, when I end, I go ‘dah dah duh duh duh,’” he says, mimicking the sound of the keyboard.

“If you look at all drumlines, they have this really stiff, robotic move,” he says. “But I wanted to be more loose and swag. So, we said we’re going to be a hip-hop drumline.”

Listen to the drumline perform "Keep It Poppin'":

The drumline has had an impact. In fact, about a dozen drumline students are flying out of Sacramento on Friday to perform in South Africa.

Grant High School is in Del Paso Heights — one of Sacramento’s poorest neighborhoods with high crime rates and gang activity. But the marching percussion group has garnered international attention, performing from Japan to Washington, D.C., even though they receive very little funding from the district.

“Economically challenged, a lot of crime — there are some problems here,” Van Buren says of Grant High’s community.

“And so, we as teachers here, we address that with love.”

“Back then, I had a whole bunch of hard heads, and I mean really hard heads,” Van Buren said, while laughing. “It was a good thing they were here, because they would’ve been in jail.”

The 30 students in drumline practice after school.

“We have a bunch of kids that are looking for things to do but find themselves getting into trouble,” Van Buren said. “And we said, ‘You know what, here’s a great opportunity for people to showcase their talent, at the same time be in a safe place, and be able to do something positive because they want to be noticed.’” 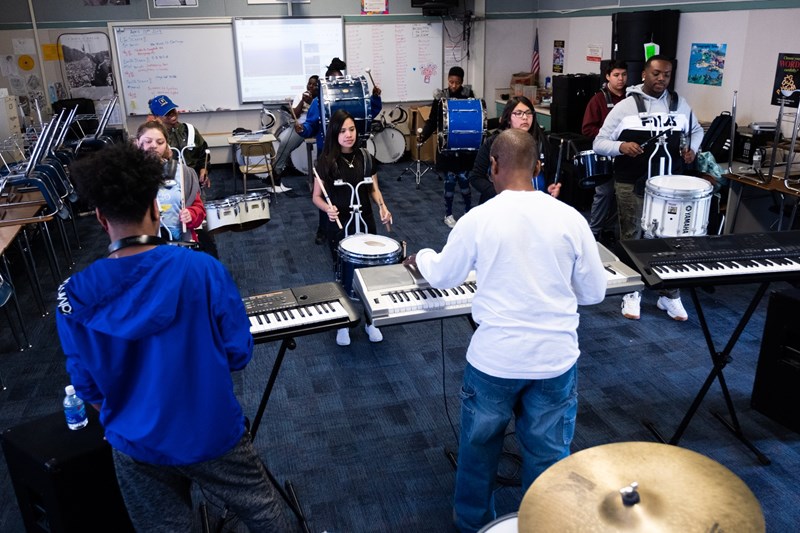 All the money for the group’s instruments, uniforms and expenses is raised by the kids themselves by playing at gigs.

“Initially, I really thought that it would be so easy to get funds from the community,” Van Buren recalled. “And when I started trying to ask people for funds, the money wasn’t there. And then I looked around and I realized why the money’s not there: because people are struggling.”

Van Buren says he does rely on corporate help and donations from public officials on occasion. “I can always call City Councilman Allen Warren, Chet Hewitt from the Sierra Health Foundation, Jim Johnston from Placer Title Company and Darrell Roberts from the Roberts Family Development Center,” he says.

The drumline leader isn’t originally from Sacramento. He grew up in Kansas and Colorado. And music was always around him.

“My father was a jazz musician,” Van Buren said. “He played with Eddie ‘Clean Head’ Vinson, Big Mama Thornton and Lou Rawls. So, I was raised around jazz and blues. And then when I grew up, I started playing music. Then I came to the Sacramento area and decided to get a real job and became a teacher.”

His efforts to keep kids out of trouble, and the drumline’s talent, have led to international attention. Over the past several years, they’ve even performed onlate-night TV, ABC’s Jimmy Kimmel Live.

Enthusiastic reaction — like the ecstatic applause from the Kimmel audience — is exhilarating to 16-year-old Aramis Lee, a sophomore who plays snare drum.

“It makes me really happy,” Lee said, “because it’s not people telling me that I can’t do something, they’re actually lifting me up saying that I did great on doing something.”

Sixteen-year-old Ladeija Luckey plays raps over songs and plays quad drums. She says drumline keeps her in a positive mood.

“When you’re going through something and you come into drumline practice and you’re with your drumline family, it just keeps your mind off the negative stuff,” Luckey said. “And it keeps you caught up in school, because if your grades are not up, then you can’t do drumline.” 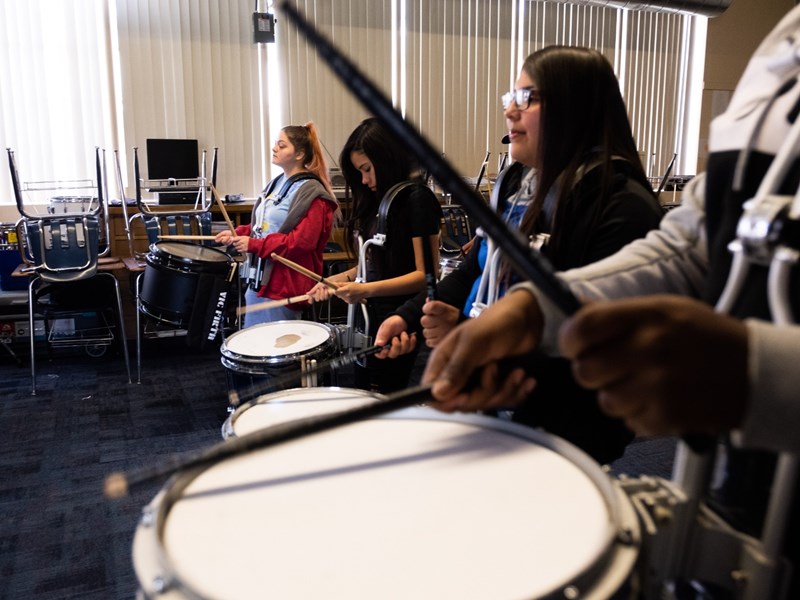 Both Luckey and Lee are among the 11 drumline members making the trip to South Africa after a recent invitation from the mayors of both Johannesburg and Cape Town.

A couple of years ago, when the drumline was made up mostly of girls, Van Buren got the idea of traveling to South Africa to play for the students in Oprah Winfrey’s all-girls academy near Johannesburg.

“We made a YouTube video specifically for [Winfrey] and never got an answer,” Van Buren said. “But there was this company MCI. They worked with us going to Washington, D.C., and they said ‘Hey, we saw your video. Has she called?’ And I go ‘No.’ They go ‘Well, we got a call.’”

The mayors of Johannesburg and Cape Town gave the drumline an invitation. Their travels this month will take them to Dubai, then go to Cape Town and finally Johannesburg.

Listen to the drumline perform the "Grant Grind":

Van Buren, who’s in his mid-60s, says the trip to South Africa will be an emotional one. He grew up hearing about South Africa’s apartheid system of institutionalized racial segregation, separating Black Africans from the nation’s minority white population. Van Buren also followed the work of anti-apartheid activists like former president South African President Nelson Mandela and freedom fighter Stephen Biko, who was killed in a Pretoria prison cell.

Van Buren is using the trip to South Africa as a teaching moment for the drumline.

“Do you remember Stephen Biko?” Van Buren asked. “These kids don’t know about him. We’re going to sit and talk about Stephen Biko. For me it was monumental to see Nelson Mandela come out of jail and then become the president of South Africa. So yes, for me it’s extremely powerful.”

Taking the drumline to Japan, Washington D.C., and now South Africa is part of the vision Van Buren has for his students.

“I want them to understand that what they’re doing is on a path to leading them on a different trajectory — college bound, there are no limits,” he said.

The drumline returns from South Africa on April 22. And they’re already considering their next trip: either Australia or a 14-city U.S. tour.

Van Buren says he wants to take the drumline to every continent on the planet.

“People go — ‘Come on, Antarctica?’ I go ‘Hey, there are people there.’ I’ve never been there. It has to be wild. And what an incredible experience it would be.”