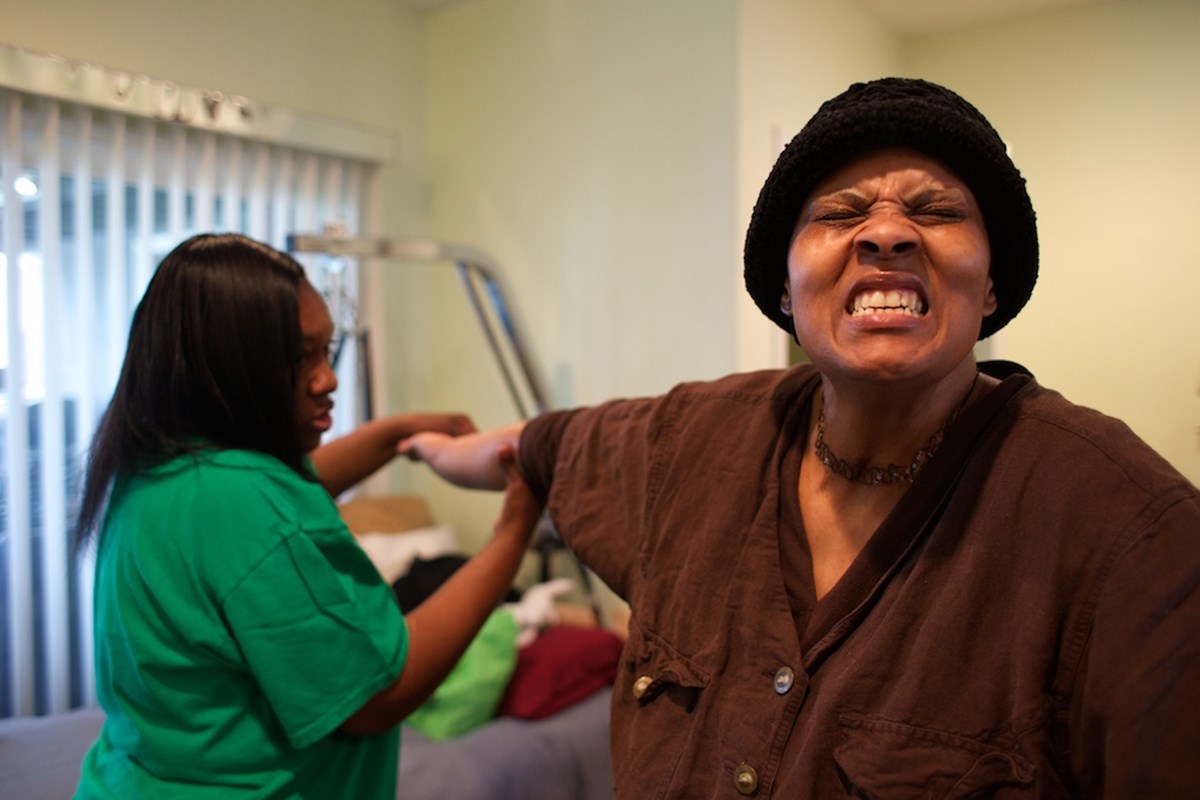 It broke Loretta Jackson’s heart when her sister, Shirlene English, told her there was “no God.”  Shirlene wrote the words down on a piece of paper to show Loretta, because in October of 1999, Shirlene suffered a brain aneurysm and a stroke, leaving her speechless and paralyzed on the right side of her body.

Because the year before that, God took Shirlene’s 11-year-old daughter, who died after what should have been a routine surgery. Because after Shirlene’s stroke, she was helpless in a nursing facility.

“She just kept getting sicker and sicker,” Loretta explained.  She was entirely confined to a wheelchair or to her bed. She was deeply depressed and at times suicidal, and even tried overdosing on her medication.

“She didn’t want to live in her condition. She was ready to give up.”

To see the sisters together now, you might not guess at the dark times they went through.

“I kept telling her, ‘Shirl, you have so much to live for. You’ve got three kids, they need you,’” explained Loretta.

Loretta, 46, and Shirlene, 51, grew up in Hope, Arkansas in a family of six siblings.  Loretta felt “stuck” in Arkansas, and moved to California in the 1990s.  But she went back for Shirlene after the aneurysm, and brought her into her home, even leaving her job to care for her sister full time. She and her husband Milton built a new bedroom and bathroom onto the back of their home, where Shirlene now spends much of her day.

That didn’t stop Loretta from trying to help her sister heal. Every morning, after breakfast, with the morning game shows running on her TV, Loretta and Shirlene work on a daily routine of physical and speech therapy. Shirlene practices writing (left-handed now), and pronouncing several useful words that she has listed on a sheet of paper, like “apple,” or “ buttons.”

Loretta massages and stretches Shirlene’s legs to improve her circulation. She flexes and rubs her hands and arms, particularly the right hand, which when left alone will twist itself into a knot. And slowly but steadily, Shirlene’s ability to move has come back to her. Some of her speech has come back too.

Another useful one “Hey!” which serves as hello and goodbye, and shows off her southern accent. Sometimes, when Shirlene is sad, or frustrated, “Amen” turns into, “Oh man.” Shirlene has to work a lot harder at words like “popcorn,” and “Wheel of Fortune,” and “I love you.”

Today, Shirlene is down to 219 pounds from a much higher weight.  She has re-learned to do many things; some writing, tying her shoes, even sewing with her left hand and her teeth. She can, with concentration and the help of a cane, rise from her chair to get to the bathroom, and to her bedroom door.

BATHS, BIRDS AND BEARS, OH MY: A DAY IN THE JACKSON HOME 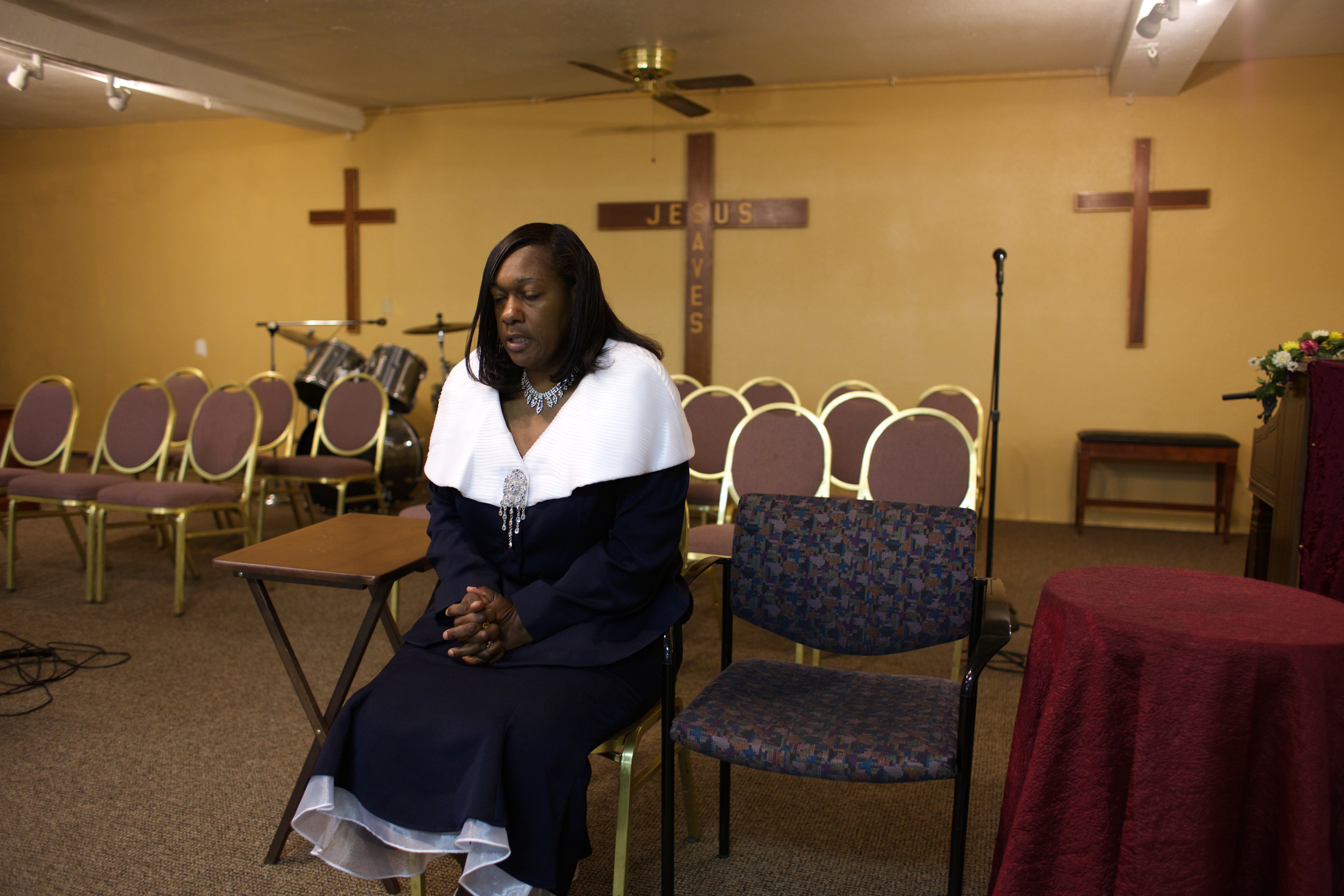 Talking to Loretta, it is immediately clear that her Christian faith is at the center of everything she does. Faith and family, and helping others; she has opened her home again and again to the people in her life. Today, there are four generations living under the Jackson’s roof. Loretta is a caregiver to her sister Shirlene, but also for her father Theodis Turner, who has advanced dementia.  He came out from Arkansas in 2011. Loretta’s oldest daughter Onasha and 2-year-old granddaughter Anaiah live with the Jacksons now too, while Onasha finishes culinary school. Their youngest daughter Johkida is a high school sophomore.  Milton’s nephew Kerese is also staying with the Jackson family.

Loretta and Milton are both leaders in their church.  He works days as a handyman and doing construction. She rises at 5:00 and joins other church members in a telephone prayer circle.  At 6:00 she begins the cleaning and the daunting amount of daily laundry. By 6:30 Shirlene is ready to begin her shower, so Loretta helps with that. On days when Onasha has class, Loretta will babysit Anaiah. She plays with Anaiah and prepares breakfasts. This is all just prelude to the most exciting part of the morning—Dad’s bath.

Theodis always needs a lot of direction to complete his bath. Loretta has removed any cleaning chemicals from beneath the bathroom sink, because Dad would likely find them. He occasionally gets into the bath fully dressed. When he won’t get undressed, she and Milton have had to cut Theodis’ shirt or underwear off with scissors. He sometimes gets hostile, convinced that Loretta is trying to hurt him.

“He’ll say, ‘Cross that line. Cross that line, come on!’” Loretta explains. “I’ll say ‘I’m your daughter, I’m Loretta.' He would say, ‘Girl I don’t know who you is. You better go find your people.’”

Loretta’s mother has health problems too, she says, and Theodis was too much to handle. The Jacksons went back for him after Loretta’s Mom called to say the police had found Theodis driving on the wrong side of the highway.  He told the police he was trying to get to his daughter Loretta’s house.

“I said ‘Well if he’s trying to get here, I’ve got to go get him,'" says Loretta

“He didn’t cuss me out today,” she says.

He did stall, and get distracted, explaining to Loretta that he’d already had a bath (he hadn’t) and that birds had flown into the house.

“Those birds come through the window all day,” he noted.

Sometimes he sees bears in the backyard. Theodis can’t be left alone for even short periods of time. So it’s a full-time job caring for him and Shirlene. Actually it’s about four full-time jobs.

“IT'S GOING TO TEAR MY WHOLE HOUSE UP"

Both Theodis and Shirlene qualify for a state program called In-Home Supportive Services.  IHSS provides money for elderly and low-income disabled people to pay a caregiver to come into the home and help with things like bathing and dressing and cooking.  The idea behind the program is that it is more cost-effective and better for clients to help keep them at home.

The system evolved to allow family members to work as caregivers and to be paid by IHSS, just like any outside caregiver. That can be a big help for families when caregivers give up outside work to tend to loved ones.

But changes are coming to the IHSS system. The Obama administration has ordered that all in-home caregivers are entitled to overtime pay—IHSS caregivers had not been paid overtime before. California Governor Jerry Brown responded by proposing a no-overtime rule for family caregivers under IHSS.

Between Shirlene and Theodis, Loretta is currently paid for about 100 hours of work a week, at $10.80 an hour. The new rule would cut her hours to 40 a week.  Ironically, the state would still pay someone else to come into the house to care for Theodis and Shirlene, as long as no one works more than 40 hours a week.

It’s a difficult policy issue. The Brown administration says paying overtime will cost millions of dollars the state doesn’t have.  But the Governor’s proposal would also mean Loretta’s income would be cut in half.

“I’m just praying it doesn’t get to that point, and the Governor will listen," she says. "This is our lives we’re talking about. If I have to go to food lockers, whatever I have to do to make sure that we can still function, that’s what I’ll have to do.”

And bringing outside caregivers into the house isn’t practical, she says, given her Dad’s outbursts. She’s worried he’ll hurt a caregiver, or be hurt.

“Right now, I try not to think about it. If these changes go through, it’s going to tear my whole house up,” she says.

Other changes have her fretting too. Her daughter Onasha will be done with cooking school soon, and she and Loretta’s granddaughter Anaiah will be off to Atlanta to start a new life.  The 2-year-old has such affection for Milton and Loretta, it’s obvious the two will be sorely missed. But Onasha is also their main backup, to help with Theodis and Shirlene during the day. “Oh Lord, when she leaves, I won’t be able to do all this stuff,” she says, laughing but shaking her head.

WHO CARES FOR LORETTA?

Family caregiver, minister, union organizer. There’s a lot of responsibility and a lot of uncertainty. She seems a little uncomfortable talking about the stress, but acknowledges that it takes its toll.

“I’ve had times where my body would go into spasm. My whole body would just be shaking.”

“If I ever get sick I want somebody to be there to help take care of me. Be there for me. I don’t want to be stuck in a home.”

Her advice to other family caregivers is simple, if not always easy, “Show love.”

To Have And Have Not

Ask A Neurologist: Dementia and Alzheimer's