Ask A Neurologist: Dementia and Alzheimer's 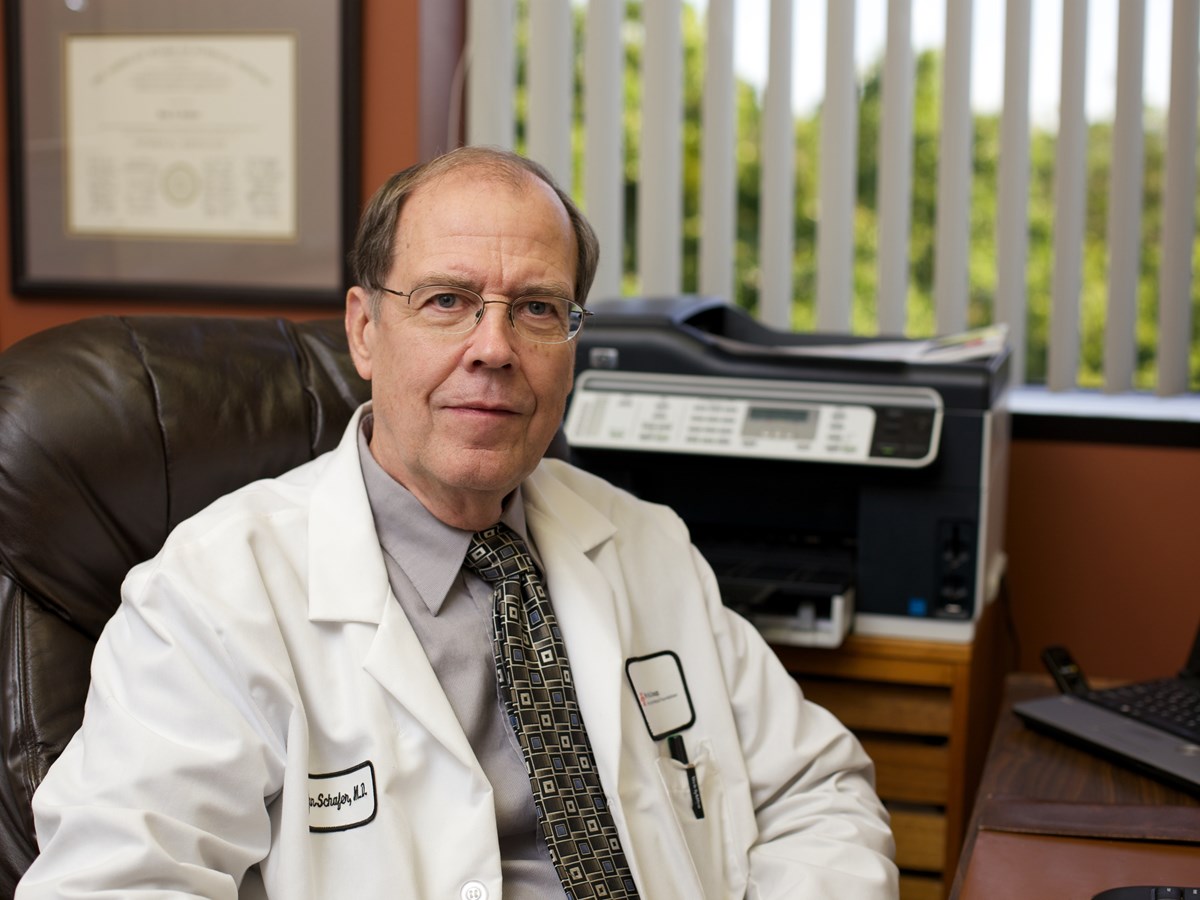 Julia Mitric asks Dr. John Schafer, who is Rick and Marianne Rayburn’s neurologist, a few questions. He practices at Mercy Medical Group and is the director of the Mercy MS Center and the Mercy Achievement Center, a program for wellness for people with MS as a chronic disorder.

A: Dementia is the term that’s used for loss of those cognitive abilities a person once had. Saying “dementia” is kind of like saying automobile. Whereas Alzheimer’s disease is like saying Buick and Lewy Body disease is Toyota. So there are many different types of and causes of dementia under the same heading.

Q: What do we know about the causes of dementia?

A: Most people have some natural decline of memory. In fact, it’s said that only about one out of a hundred people beyond their 60s and 70s don’t experience some decrease in their short-term memory or word finding abilities. And for many of these, the cause is benign in the sense that it doesn’t progress to a disabling severity. For those dementias that are life-changing and that interfere with peoples’ ability to function in a normal setting, the major causes are Alzheimer’s disease and vascular disease (strokes).

And it’s interesting that years ago, even in 1960s -1970s, when you get old and you get demented, the theory was, this was a hardening of the arteries. And then in the 1980s and 1990s, there was much more recognition of Alzheimer’s disease as a specific entity that was really recognized to be responsible for dementia in 80-year-olds and 90-year-olds.

And then it was said “This has got nothing to do with strokes and vascular disease.” And now we’ve kind of come around to realize that when you look at the brains of people who are demented, when they die and autopsies are done, it’s really a mixture of those two things. The degree of their dementia is…the sum total of those two things. People can have a lot of Alzheimer’s disease under the microscope and not be too bad, or have vascular disease under the microscope and not be too bad. But when you put the two of them together it accounts for more severe kinds of dementia.

Q: What are some of the behaviors and symptoms that come with dementia?

A: Dementia can affect people in enormously different ways. Some people develop behavioral problems that can be aggression or panic and fear or disorientation to the point that it becomes dangerous if people don’t know where they are and are trying to get out of the house in the middle of the night. Those things are extremely disruptive and interfere greatly with the ease of providing care.

Behavior and bladder/bowel control are the main reasons that people require higher levels of care than can be given at home. You know, you don’t send somebody to a nursing home because they can’t remember peoples’ names, or even if they have difficulty learning their way around the house or doing tasks, you still take care of them at home.

But behavior is a different thing. One problem would be people who are calling out all night long and fearful so that the caregivers can’t sleep. Or waking up at 2:00 in the morning and thinking it’s time to go to work at my teaching job and getting dressed and walking out the door. You know, that requires a higher level of attention. Really, sleep problems of any kind - because people who can’t sleep through the night are a lot more difficult to take care of.

Q: Is delusional thinking a symptom of dementia?

A: It can certainly be part of dementia. By delusional thinking we mean believing that things have happened or are happening that aren’t. And paranoid-delusional, e.g., believing that people are stealing your things. You know, you can’t find your purse and so somebody must have stolen it.

And in Alzheimer’s disease in particular, there may be delusions about faithfulness of the partner, a belief that you’ve done something wrong and police are going to come and arrest you or that you’re going to be kidnapped.

And that’s particularly problematic when the patient believes that family is doing something to them. I’ve had situations where the demented person calls the police because saying “I’m being tortured,” or “I’ve been kidnapped.” In one case, Adult Protective [Services] responded and the family who were very responsible caregivers ended up having to pay large sums to an attorney to try and settle this.

And other, more tame kinds of delusions are believing that dead people are still there. You know, I saw my sister yesterday and she came to visit. When in fact, the sister died ten years ago. Or parents, you know? Patients who are older people who may cry out for mother. These are some of the typical delusions.

Q: What steps can an individual take if they think a family member is developing dementia?

A: You may have to drive it home with the primary doctor. Quite frankly, when somebody’s aging and the family member talks about their memories the primary care doctor’s response will be, “Well, what did you expect? No, we don’t need to do anything special about this.”

Even if we don’t have a treatment, it’s important to identify dementia and explore it. There are things we look for in every patient in terms of blood tests and things that can be excluded. Medication effects, for example, people may have trouble with their memory or mood because of a pill they’re taking. So this is something where a neurologist can be helpful in identifying situations where dementia is reversible or where you can bring some improvement just by changing medications or some other basic steps.

Again, we’re looking for the difference between benign memory loss and dementia. Not being able to remember peoples’ names right off the top of your head or trouble thinking of words or misplacing things are pretty common and by themselves are benign.

With dementia, we’re talking about impairment of cognitive functions, and not only memory deficits. Forgetting to pay your bills or paying the wrong amounts or forgetting where you are, that’s different.

This often comes up with people I see. I always ask “Do you get real lost driving?” And while the patient may tell me no, their spouse may volunteer, “Well remember that time when you ended up in North Natomas and we don’t live anywhere near that? And you had to call me up and find out where you are and how do you get back home?”

But on a more concrete level, not being able to manage your finances, forgetting to eat or take medications or doing other dangerous things. I mean venturing out in places where it’s not safe. Driving, [not] being able to react to situations and recognize dangerous situations. These are all things that endanger peoples’ safety.

Q: When you first assess an individual showing signs of dementia, do you have a way of knowing if it is a faster or slower progressing dementia?

A: It varies a lot. Alzheimer’s disease can be a very long-term process. What I see [is], somebody is brought in who’s really developing difficulty taking care of themselves [or] kids who bring mother in because she’s getting confused and they’re worried that she’s not eating right or not taking care of herself. Or having obvious severe memory problems, like calling up and asking “Where have you been? I haven’t seen you for a month,” when you were there yesterday. But then when they look at it, they say “You know, in retrospect, I saw this five years ago that she was starting to have some trouble with memory. It was more benign.”

Another situation I see, when one person in a couple dies, it’s not uncommon to find that the surviving spouse may be much more impaired than the kids ever realized. But you know, when the other one was there to kind of cover for them, you didn’t realize that the person wasn’t eating right, for example, because there was somebody taking care of them.

Q: What is the status of clinical research on treatment for dementia or progress toward a cure for Alzheimer’s disease, a leading cause of dementia?

A: There’s a tremendous amount of research that’s going into dementia.  Unfortunately there haven’t been breakthroughs. There are a few prescription medications that have been shown in some people to have some benefit to memory. By and large, those effects are not very dramatic and in my experience in prescribing them, most of the time not even noticeable to the families. There’s some evidence that maybe they even slow progression, but the fact is they’re not the solution to the problem.

So what we need to do is figure out the cause, for one thing, and we don’t’ know that. For Alzheimer’s disease (which is one of the most common causes of dementia) it’s still not clear what exactly is going wrong. There have been some theories, but medications that have been based on those theories turn out not to have ever shown that they have any benefit.

We’re a long distance away from being able to put our foot in the door and stop the process, but it’s very, very clear that general health has a lot to do with becoming demented later on in life. So treating high blood pressure, avoiding diabetes, controlling cholesterol, you know, very definitely can reduce or delay the chance of later dementia.

The problem with all of these things is that they’ve not been shown in clinical studies to make any difference. People who are in the placebo aren’t any worse off than people who are taking the treatment, but it may be that for those things to work you might have to start taking them when you’re 30 years old and not after you’re already demented.

But what we really need is to figure out why do cells die? Even in ‘normal’ individuals - why is this pre-programmed that the cells will eventually shrivel up and die? And can we put out foot in the door and stop that process before it begins?

So what we can accomplish right now is general health. Clearly, if people stay healthy early on, exercise, control your blood pressure, control your cholesterol, don’t get diabetes, don’t smoke, then your chances of avoiding or delaying dementia are much greater. And not only dementia, but heart attacks and strokes and all those other disorders of aging.

Q: One theme of our documentary is about how the caregiver may or may not be aware of the precariousness of their own health -  “Oh, wait - if I’m not taking care of my own health I’m not going to be able to care for my family member.”

A: Yes, this is a big, big issue. When you’re the one that’s providing 90 percent of the care and then you become disabled or have a stroke or heart attack or can’t be there, or you die, those are major crises.

What’s surprised me through the years is when one of my patients with Parkinson’s disease dies or Alzheimer’s disease dies, that lo and behold, a month or two later, their spouse shows up in my office as a patient and says “You know, I never told you about this when I was coming in with my husband, but I’ve been worried about such-and-such.” So only then is there a shift of focus to the caregiver’s health; and there maybe serious things there that were never addressed because there wasn’t time when they were caregiving.