Cat Ricketts says there were signs early on that something was different about her son Roland. As a baby, he would "wail and scream" when Cat tried to rock him to sleep. As a toddler, "he'd kind of always be on the edges."

The day care people didn't like Roland, and he didn't like them. One day, one of his pre-school teachers said: "You know, Roland's like a little ghost. He doesn't talk, he doesn't interact."

Roland was born in 1984, before autism became a household word; before widespread knowledge of behavior treatments, and before the movie "Rain Man" won the Academy Award for best picture.

But when Roland was diagnosed with autism, Cat and her husband Lex didn't let go of their vision for a normal life for their son.

"My son was going to go college," says Cat, who has worked as a public school teacher since before Roland was born.

When Roland was a child, Cat spent two hours a day, seven days a week, conducting behavior modification exercises to transform her son from a "ghost" to an animated and communicative kid. Videos show painstaking flash-card sessions. Cat sat across a small table, leaning in towards a blond, kindergarten-age Roland. She asked questions over and over in a stern voice, repeatedly forcing his chin in her direction to make eye contact. Roland cried, yelped, flapped his hands, picked up the table and even cursed. Correct answers were rewarded with tokens or potato chips.

The Ricketts also worked intensely to stamp-out Roland's "stimming," or self-stimulation behavior - a common tendency of autistics. As many as 20 times a day, Roland would wave his fingers in front of his face in an attempt to retreat from his environment. Every time he stimmed, Cat and Lex would raise his hands over his head, get in his face and say sternly "no stimming!"

Their parenting style earned them a reputation of being "Nazis." But not all of their therapy was unpleasant. Roland also did years of music and play therapy where he danced and sang with a hired teacher. Lex was so committed to his son's education that he served as an in-school personal aid to Roland for a couple of his early school years.

Lex says back then, their approach with Roland was in the minority. They were "behaviorists" not "humanists." Now, behavior modification known as Applied Behavioral Analysis (ABA), is a mainstream treatment for autistics.

Lex says the hours his wife spent in therapy with their son helped with his speech. She says they were just helping Roland assimilate into society, as any parents would.

Roland is 28 years old now. He lives with his parents in the house where he was raised, in Elk Grove, Calif. He has thick glasses, facial hair, and long, thick blond wavy hair. He walks with a slight swagger, and purses his lips. He sometimes wears a crooked grin like he's not cluing you in on a joke.

My name is Roland. We're at my parents' house, and my dad has health problems. My mom works at Lodi High School. She's a teacher. I helped work on computers…  I helped him fix the house…

This is how he introduces himself.

Roland is most comfortable answering "yes-or-no" questions. When asked "why" or "how," he may stare blankly, like he's trying to compute. Or, he'll repeat words from a question asked of him, what his father Lex calls "echoing."

Although Roland's verbal skills are limited, he's able to perform complex tasks. One afternoon he set out to change the switch plates in the living room electric sockets. He shut off the power at the fuse box, gathered tools and went to work, with minimal guidance from his father. But for Roland, explaining his process was not so simple.

Pauline: How come you turned off the power?

Pauline: You turned off the power though, right?

Roland: Which one to turn off.

Lex: Okay. Well why did you turn off the power?

Lex: What happens if the power's on and you touch the wires?

Roland: You get shocked. 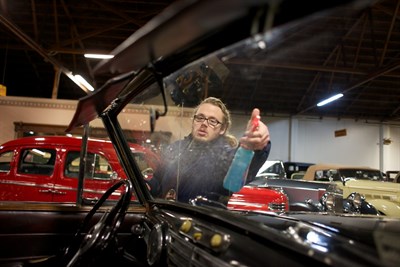 Roland's verbal limitations haven't held him back from some rites of passage common to people his age. Roland was mainstreamed in the Elk Grove public school district. He now holds a full time job at the California Auto Museum in Sacramento (his disability check subtracts his wages). Five days a week, he takes public transportation to and from work by himself. At the museum, he'll vacuum, take out the trash, clean bathrooms, and set up venues for events.

His "job coach" through InAlliance, which provides a Sacramento-area job placement program for disabled adults, says he has trust and confidence in Roland.

"My first impression of Roland was 'hmmmm… kinda limited in what he can do.''' says Mario Pulido, employment training specialist at InAlliance. "And that wasn't the case."

Pulido says aside from occasionally getting lost in thought, Roland is very meticulous, and follows direction well. He is dependable for tasks like auto detail.

Roland shows some confidence in himself, as well.

Pauline: What kinds of things are hard for you to do?

Roland: I do stuff that's hard. I figure it out.

The Ricketts say they've taught him a hard work ethic "You start a job, you finish a job," says Cat. Lex show's a parent's pride when he says Roland has earned his keep, gaining performance-based pay upgrades at work.

Lex says there's a tendency in society to "remove all responsibility" from disabled people, to concentrate more on their disability than what they can contribute.

"Not only is it financially undesirable," says Lex, but "they're missing the abilities that these kids represent."

Those philosophies have been engrained in Roland, in both words and actions. When asked what he's proud of, he says, "I've worked hard…work hard."

A DANCE WITH HIMSELF

Every month for more than six years, Roland has attended dances with dozens of other disabled adults. One Friday night in January, Roland shows up wearing a smart-looking sweater with black jeans and dark leather shoes. He sits at a round table with people, but doesn't engage them in conversation.

Between trips to the snack bar, Roland ventured to the dance floor, where he swayed side to side by himself. He holds a punch drink in one hand. His body doesn't move to the beat of the music.

"He doesn't talk a lot, he's kind of a quiet guy," says Kim Matranga, who organizes the dances through the Cosumnes Community Services District. "But he gets up and he dances and he just likes to be independent and do his own thing." 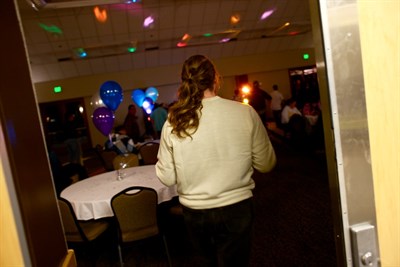 Matranga says the disabled adults who come to the dances relate like brothers and sisters. "Over half of them don't dance with anyone in particular. But isn't that the way with all of us sometimes?" says Matranga with a hearty laugh.

Roland's father Lex says Roland likes to socialize, but he tends to stand on the outside of a group because it can be "too intense" for him.

That disconnection translates into Roland's romantic life as well, at least according to his mom. Cat recounts the story of one woman with whom Roland would walk to Jack n' the Box.

"She wanted to hold hands and she wanted to be kissy and he didn't want any of that. And so… you know, they grew apart." But he wasn't saddened by losing her friendship, says Cat. "There were other things that interested him."

Those interests include things like scuba diving and going to the gym.

Roland has been known to show emotions, under certain circumstances. When his sister was scolded as a teenager, for example, Roland reacted with an angry outburst against his parents.

He laughs at over-the-top action and comedy in movies on TV. The more outrageous the stunt or outburst, the heartier Roland's belly-laugh.

Roland says he's never cried, except when he was little.

Does he always feel happy?

WHO TAKES CARE OF WHOM?

Roland's parents say he cares for others not necessarily with words, but with gestures.

He offers help without prompting - whether it be mowing the lawn, helping his mother with a mechanical task, or handing his dad a screwdriver before he asks for one.

Roland is close to his father. Lex's health problems caused him to retire early from running a computer store. He's limited in what he can do around the house. He's had a liver transplant, and has diabetes and pulmonary hypertension. He has trouble walking 50 yards or bending down. And he uses an oxygen tank.

"He seems very dedicated to assisting me," says Lex. "I feel this sense of love from him. It truly is touching."

Roland helps his dad with everything from putting his shoes on, to fixing lunch. He helps him get in and out of the car, and goes with him to doctors' appointments.

There is tenderness in Roland.

Pauline: Do you think that you help take care of your dad?

Roland: I rub his feet, legs.

Pauline: And what other ways do you take care of your dad?

Roland: Rub neck and hands when they cramp up.

Pauline: Do you think that they need you as much as you need them?

Pauline: No? What do you mean?

Sometimes Roland passes up a trip to the gym, something he loves, so he can stay home and take care of his dad.

"I often question who helps who, you know? Who's therapeutic to who?" asks Lex. "Roland is somebody who adds to our lives and if he wasn't here we would be minus quite a bit."

One day, Roland will move out of the house where he grew up and where he now lives with his parents. At least, that's a goal his parents have set for him. Cat says it's part of her desire, from the beginning, has been to help Roland live life as other people do.

"You want roots and wings for your kids," says Cat. "Roland's got the roots and at some point he's going to take flight." 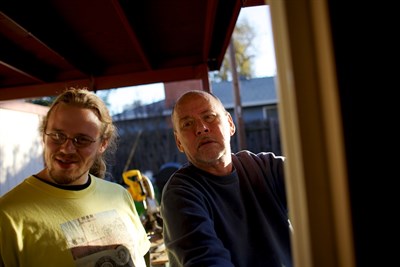 Cat says he functions well. He can cook for himself, and he can navigate the bus system. But he does need help with things like balancing a checkbook. If he moved out, Cat says he would need a group home, or roommate.

Lex speaks proudly of how his son has grown into adulthood. He says having a child with autism is like planning a trip to Paris, and then stepping off the plane in the Netherlands. You might have started with one expectation, but when you explore the alternative, you realize it too is a great journey.

Lex says he wonders whether Roland might want to socialize and connect more with others, but the days of modifying his behavior are over.

"Life can't be just one torture after another," says Lex, there's a point where Roland's life is his own. "He can't just feel that we are here to correct his behavior."

Roland's sister is his trustee. Cat says in their absence, she will make sure that he is properly placed. She will fulfill their role in looking after him, Cat says.

"It scares me sometimes to think about being old and what's going to happen with Roland," says Cat. "But…I think he'll make a way for himself."

Roland has talked with his parents about moving out eventually. On the way home from work at the Auto Museum, Roland sits at a bus stop, waiting for his ride back to Elk Grove.

"I'm pretty high functioning," says Roland. "'Gonna live with my parents until I'm 35," he adds. "They like having me in their lives."

There's No Normal, There's Just Me

Return to showAutism Grows Up