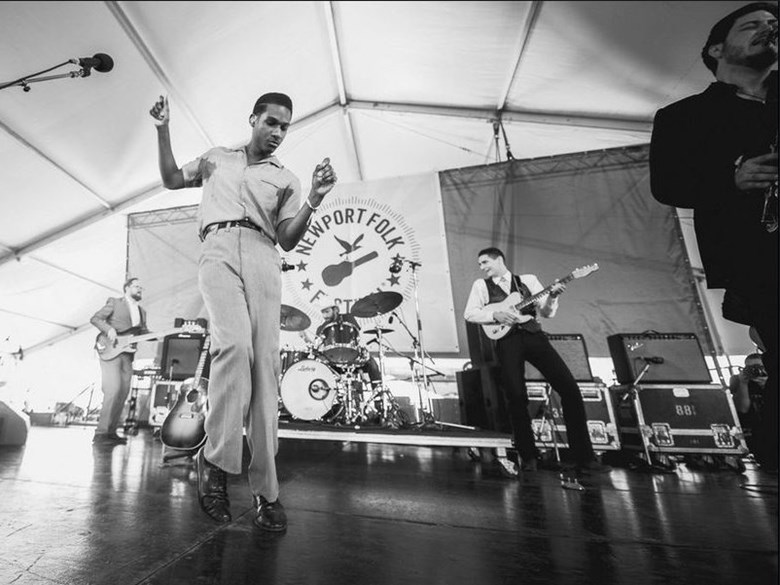 Leon Bridges took the stage at the 2015 Newport Folk Festival with a great deal of attendant buzz. Drawing favorable comparisons to Sam Cooke from many corners, he'd released his chart-topping debut, Coming Home, just a month earlier. But the 26-year-old soul singer from Fort Worth, Texas, took it all in stride, delivering a set that lived up to its promise.

It's true that Bridges' music has an undeniable kinship with the sounds of the late 1950s and early '60s. His tenor recalls the male R&B singers of that era, Cooke among them; its smoothness nevertheless hints at a ragged quality that might take over in a moment of particular emotion. He writes songs that, with titles like "Twistin' And Groovin," could have fit in at teenage dances more than 50 years ago. He tosses out tastefully melismatic gospel runs like a seasoned pro.

At Newport, Bridges naturally inhabited the vintage aesthetic that inspires his music. Nattily attired in high-waisted slacks and well-shined shoes, he moved with an easy grace that evoked Jackie Wilson, or maybe Sam & Dave. Bridges' personal connections to the past also shone through, lending emotional authenticity to his careful replication of it. The stories of his mother and grandparents in mid-century New Orleans weave through his songs, and he affectionately invoked them in his stage banter. "They would love if you would dance to this one, if you want to," he told the crowd — most of whom, it seemed, wanted to.