Destined For Jazz, Flutist Ali Ryerson Carves Her Own Path 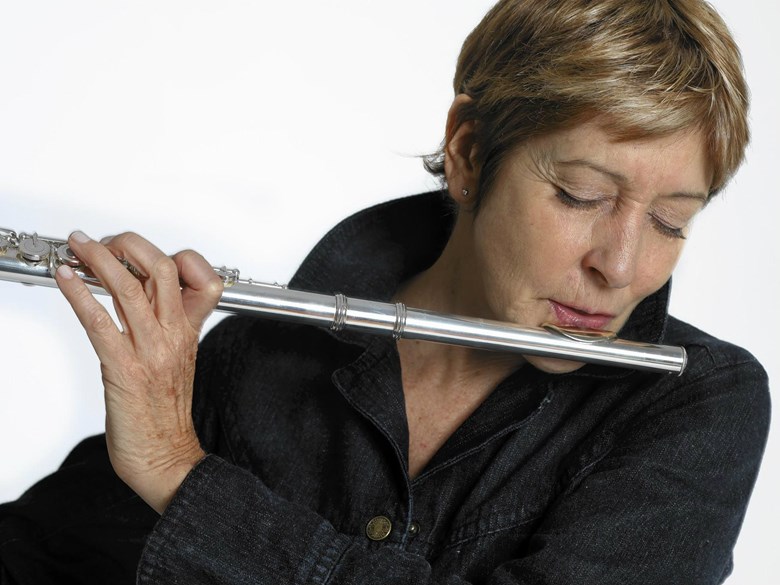 If you ask jazz flutist Ali Ryerson about her career path in music, she’ll tell you this: “I had what I call a perfect storm to become a jazz player growing up.”

Her three older brothers were musicians. So was her highly regarded father, Art Ryerson, who played guitar in the Paul Whiteman Band, and went on to become a sought-after studio musician, recording with a variety of artists.

“Everybody from Louie Armstrong to Charlie Parker to Erroll Garner. Sinatra. He was even on Elvis Presley’s first Decca recordings that were done in New York City,” she said.

For Ali Ryerson, a life in jazz was almost preordained. And yet, she has carved out her own distinct identity. She’s a jazz musician who loves being different, from the instrument she plays to the groups she plays with.

Like her father, Ryerson first established herself as a musician before becoming a go-to player in the recording studio.

The studio is where she met her future collaborator, Joe Beck, a first-call session guitarist who had worked with Miles Davis, Gil Evans and other jazz luminaries. The two discovered their special chemistry after sitting in together one night at a club.

“The next morning I get a phone call from Joe Beck. And the first thing he said was, ‘We’ve got to be playing together. We have to start playing together.’ And I was like are you kidding me!” she recalls.

Ryerson had by then started playing an “alto” flute, which has a mellower, lower pitched sound than the traditional concert flute. That resonated with Beck.

“And he said I’ve had this guitar that doesn’t exist in my mind for about 30 years now,” she said.  “When you play the alto flute, I’m going to have this guitar built. Which he did. Which he called the alto guitar. He had that built because of me and for us to create that duo.”

Beck and Ryerson made two CDs and toured the world for several years as a duo.

Ryerson made a splash with Beck using just two instruments. In 2012, she went the other way and recorded a big band album with over 20 musicians. And this was no ordinary big band. Yes, there was a rhythm section of piano, bass and drums. But there were no trumpets, trombones or saxophones. Instead? All flutes.

“The idea was not to replicate a traditional big band sound but rather to use these different flutes in the flute family to create a new sound and to make it a jazz ensemble, not like a flute choir,” Ryerson said.

The album “Game Changer” was bold and surprising with its all-flute instrumentation, but maybe not such a surprise coming from Ryerson.

“Of course I’ve always thought that jazz flute was like the coolest instrument, obviously,” she said. “It’s my whole life.“

Flutists like Ryerson — who don’t double on saxophone or clarinet — are relatively rare in jazz, which makes her success in the jazz world all the more impressive. As for the secret to that success, maybe it was following dad’s advice.

“I never had a single conversation with my father, in person or on the phone or whatever, where he didn’t end it by saying, ‘And don’t forget to practice.’”

Ali Ryerson is performing at 6:30 p.m. Thursday at the Crocker Art Museum in Sacramento.