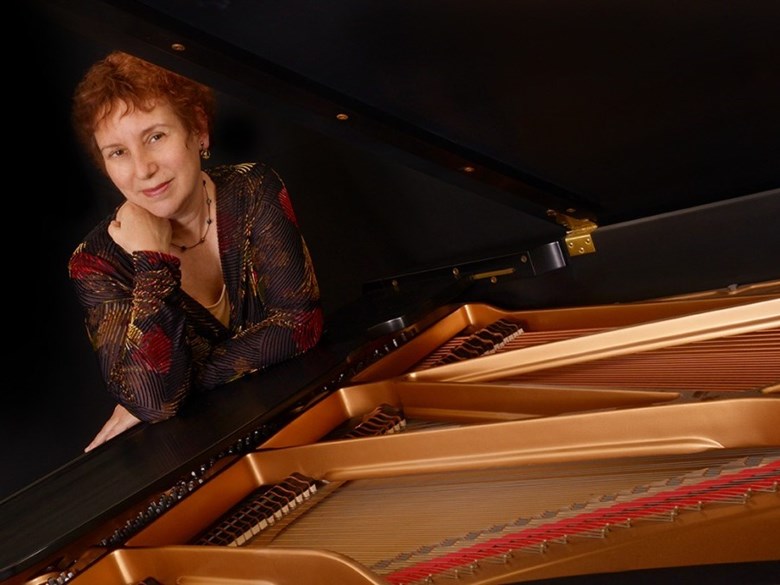 British born pianist Marian McPartland was a familiar and familial voice on NPR for more than 30 years. Through her popular weekly program Piano Jazz, which debuted in 1979,  McPartland introduced millions of listeners to such jazz greats as Bill Evans, Mary Lou Williams, Sarah Vaughan and Chick Corea.

But decades before she became a broadcaster, McPartland was already making her mark on jazz and society.

“She started out playing for the troops in World War II. That’s how she met her future husband Jimmy McPartland,” explains longtime admirer and fellow pianist Laura Klein. “Then, when she moved to the U.S. after the war, she was a real fixture on 52nd Street in the Bebop scene.”

In the 1940s and 50s, New York’s famed 52nd Street was the haven for jazz musicians across generations, from swing era veterans like Roy Eldridge, Stuff Smith and Fats Waller to the progenitors of the emerging style known as Bebop, including Miles Davis, Charlie Parker and Thelonious Monk. For nearly a decade, the Marian McPartland Trio was a mainstay at one of the scene’s more popular clubs, The Hickory House. Duke Ellington was a frequent patron. So was fellow British expat and jazz critic Leonard Feather, who once drew attention in print to McPartland’s minority status as one of the very few female instrumentalists working in jazz at the time.

“Famously, Leonard Feather wrote about her and he said she’s got three strikes against her … she’s British, she’s white and she’s a woman,” Klein says with a smile.

There was another thing that Klein says distinguished McPartland: “She was a composer, which most people don’t know and that’s what we’re going to be highlighting in this concert. Her writing I think has a very atmospheric and almost wistful quality to it. Even her titles, tunes like 'Afterglow,' 'Time and Time Again,' 'Ambience.'”

With encouragement from her friend, the distinguished composer Alec Wilder, McPartland developed her own composing style in the late 1960s, displaying a unique and intricate approach to jazz harmony.  Klein says while McPartland was an exceptional composer, she was equally impressive as a fearless improviser. That skill showed up weekly on her Piano Jazz program.

“She would do those little free improvisation portraits of people,” explains Klein. “I remember she did one of Chick Corea, which was terrific.”

That spontaneous musical portrait was actually the result of a friendly challenge from Corea during the very first season of Piano Jazz. Here’s how it went midway through the show.

Corea: “Why don’t you sit there and look at me and improvise a portrait of me.”

McPartland: “All right.  I’ll have to tell you the ingredients of it. … A lot of strength, a lot of humor, a lot of fun, a lot of energy, a lot of creativity, kind, nice feelings, a lot of love.  I’m not gonna have time for all this!”

Corea: “Oh well you can summarize it.”

McPartland: “Um, have to figure that one out.“ Then she starts playing.

The portraits by McPartland would become a mainstay on Piano Jazz. She even released an entire collection of them on a CD.

Although McPartland reached millions of listeners through her Peabody Award-winning radio program, she reached thousands more through grassroots efforts in New York area schools, where she took part in jazz outreach programs starting in the mid 1960s. In 1986, she was recognized for her work with the Jazz Educator of the Year award.

Klein was a music student in Buffalo, N.Y., when she first met McParland in the 1970s. Klein went to hear her perform at an elegant club in downtown Buffalo.

“She was extremely gracious, encouraged me when she found out I was an aspiring jazz pianist,” recalls Klein. “I remember she said ‘Oh, we should play 'Laura' for you.'”

Beyond the music they’ll perform on Monday night at Antiquite, the band Klein is bringing to Sacramento will honor McPartland in another significant way.

“The trio is all women,” she explains. “I’m very lucky to be joined by two amazing musicians, bassist Ruth Davies [Clark Terry, Bonnie Raitt, Van Morrison] and drummer Kelly Fassman [Broadway shows, Moscow Circus]. I would say two-thirds of the program is going to be Marian compositions and then we’ll play a few standards that Marian liked to play and we’ll be playing at least one composition of mine.”

As for summing up the impressive and impactful career of the Grande Dame of Piano Jazz, who would have celebrated her one-hundredth birthday on March 20, Klein puts it this way:

“She started out playing Dixieland, Bebop, music of Chick Corea and Herbie Hancock, she would do free improv.  I mean it’s like a mini history of jazz.”

The Laura Klein Trio will perform a centennial tribute to Marian McPartland on Monday, March 19, at 7 p.m. at Antiquité in Midtown Sacramento, presented by the Sacramento Jazz Cooperative.