Fifty years after the genre-defying classic recording of  John Coltrane’s A Love Supreme, his son Ravi has spent nearly a week at the SFJAZZ Center, exploring reworkings of his father’s compositions with a variety of ensembles, including collaborations with Joe Lovano, Geri Allen, The SFJAZZ High School All-Stars and Nicholas Payton.

John Coltrane’s music was his prayer, and this 33-minute album-length suite elevated his status well beyond jazz circles. A Love Supreme sold over 500,000 units, won Down Beat’s album of the year in 1965, and influenced everyone from Roger McGuinn of the Byrds (who credited Coltrane with inspiring “Eight Miles High”) to Carlos Santana.

Still jet-lagged from my recent yoga pilgrimage to Pune, India for a 10-day Iyengar intensive celebrating Geeta Iyengar’s 70th birthday, I mustered the energy to drive to the Bay Area for what I hoped would be an equally spiritual experience. I was not disappointed, for the vibe laid down by Geetaji was reignited by Ravi and his special guests.

The 10 p.m. set was sold out and began with a synthesized-enhanced bass solo by Garrison, setting the stage for “Wise One,” another Coltrane spiritual anthem. Ravi’s excursion on tenor retained all the richness, fullness, and spiritual presence of his father’s original effort, but was spread over a modern canvas of electric funky bass lines. Ravi switched to soprano sax on “Satellite,” again with a pristine tone.

Nicholas Payton and guitarist Adam Rogers joined the band for Coltrane’s “Tungi.” Although Payton is known as a world-class trumpet master, here he alternated between laying down some supportive chords on the Fender-Rhodes, then joined Coltrane in the front line with some beautiful upper register offerings. Guitarist Adam Rogers got off some Pat Martino-influenced rapid fire lines as the song expanded.

A too-brief version of “Lonnie’s Lament” was followed by “Your Lady,” finding Coltrane on soprano again with Payton taking another inspired trumpet solo. “A Love Supreme” again found Payton at the keyboard, laying down a lush canvas on the Fend Rhodes over which Coltrane painted ethereal showers of soul and power on tenor. Transitions between the movements were often handled by Garrison’s electronic adventures, some more satisfying than others.

As the concert concluded, all musicians embraced on stage, showing they were emotionally moved by this magical evening as much as the audience. 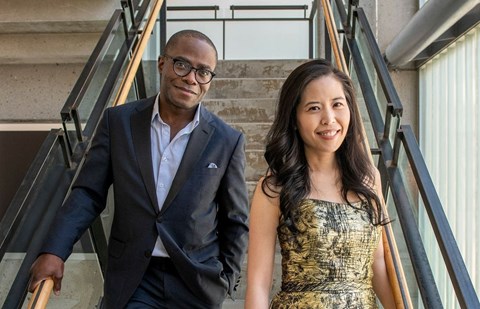