Lock Screen: At These Music Shows, Phones Go In A Pouch And Don't Come Out 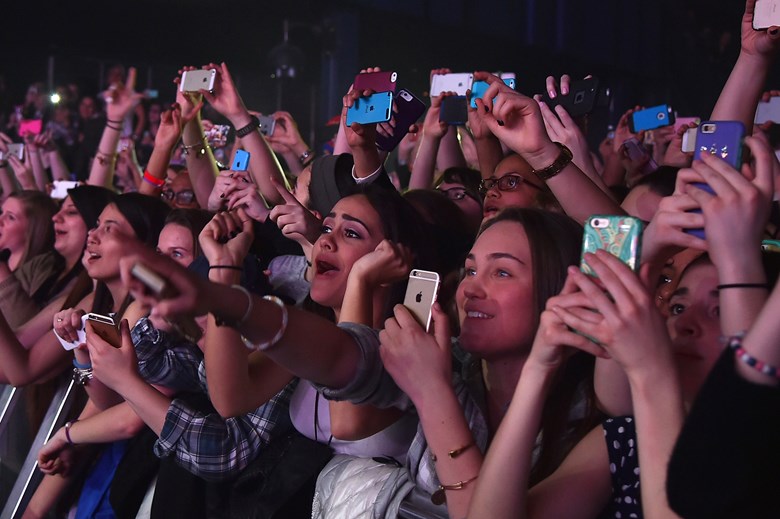 Concertgoers use their cellphones during a Fifth Harmony concert March 23, 2015, in New York. The company Yondr created a locking pouch to hold phones during performances, creating a "phone-free zone."

Before the folk rock band The Lumineers released their newest album, Cleopatra, in April, they played a series of secret shows. Emphasis here on "secret."

"There was a large concern about the album being sort-of released via grainy video and leaked out online," said Wesley Schultz, the band's lead singer.

So the band decided to lock up people's phones — not take them away, exactly, but just lock them up for the show. Like a timeout.

At the concerts, The Lumineers started working with a company called Yondr, which created a locking pouch for people to hold their phones in during performances. Audience members keep the pouches with them, and they stay sealed as long as they're inside an established "phone-free zone," but unlock outside of that.

Schultz said he was surprised at how well it works.

"If you can set it up so that people can't get to their phones as easily or are deterred, people actually really welcome that," he said. "It's just such a strong force of habit in our lives right now."

Schultz has taken it a step further and adopted the mentality in his personal life: At his wedding, he and his wife asked guests to check their phones at the door.

"It wasn't because of any sort of a, 'I don't want photos of anyone at the wedding' — it was more, we wanted people to be present," he said.

That's become somewhat of a mantra for entertainers these days.

As Beyonce herself told fans at a recent show, "Y'all gotta put the camera phones down for one second and actually enjoy this moment."

Adele, too: "Yeah, I want to tell that lady as well, can you stop filming me with a video camera? Because I'm really here in real life — you can enjoy it in real life."

Smartphones may be ubiquitous, but there are still limits to common courtesy. Recently the movie theater chain AMC backed off a proposal to allow texting in cinemas after it garnered enormous public backlash.

Schultz thinks that sense of decency should extend to live music.

"I think of it like, if we had that same attitude and you went to see Hamilton, people would be totally up in arms about that," Schultz said. "But for some reason it's completely acceptable to do at shows."

(That said, Hamilton isn't immune to cellphone faux pas either. As The New York Times reported, the musical's star Lin-Manuel Miranda once chastised a certain celebrity on Twitter for incessant texting. Meanwhile, Patti LuPone grabbed a phone away from one audience member in the middle of Shows for Days.)

In this environment, Yondr has found fans of its own in artists like Alicia Keys and comedians like Dave Chappelle, Louis C.K. and Hannibal Buress.

It's not just about cutting the distractions of glowing screens and, worse, ringing phones. For some, there's also a concern of creative security.

According to a Washington Post article, Keys hired Yondr for a concert where she planned to premiere new songs from her first album since 2012's Girl on Fire. Louis C.K. did the same when he was trying out a new set at the Comedy Store in West Hollywood.

A new patent granted to Apple — for infrared technology that could disable smartphone cameras remotely from the stage — might make those pouches obsolete one day. But the idea is the same.

Not everyone has reacted positively to the idea of a "phone-free zone," however.

"Even at one of the shows, a guy brought in a knife with him — just, he usually carries a knife, I guess — and he tried to stab through the case," Schultz said. "And it's got steel, I think, woven into it. So his knife got stuck in the thing, and then when he had to leave, he had the embarrassing deal of having to tell the people that he tried to open it, and they had to pry his knife loose."

Will Yondr, or methods like it, eventually become the norm in entertainment? Schultz thinks so: "Something tells me in a little while we'll kinda look back and say, 'We were a little out of control with our use of phones — we didn't really know boundaries. We were sort of working it out.' "