In 'Porcelain,' Moby Searches For Validation And Finds Unlikely Success 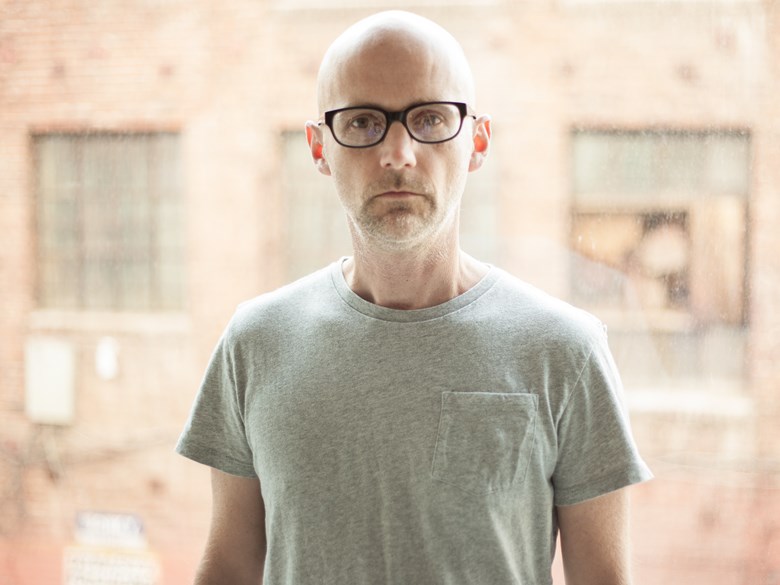 Moby's new memoir, Porcelain, is a tale of dance clubs, DJs, and New York City in the 1990s.

In the late 1980s, Moby was drawn to what he calls "the dirty mecca" of New York City. As a DJ and electronic musician, he was a staple of the rave scene: massive crowds dancing until dawn, probably under the influence of a substance or two, all moving as one to his songs.

Moby says he never would have predicted his success spilling into the mainstream — but it did with the album Play,a mashup of techno, old blues samples and darkly poetic lyrics. Released in 1999, the record sold millons and spawned hit singles, including what may be the artist's signature song, "Porcelain." That's also the name of his new memoir.

"Porcelain is fragile and white, and I am fragile and white," he explains with a laugh. "And also, halfway through the book, I go from being a sober Christian to being a very un-sober, non-Christian. And when I relapsed, to be graphic, I did a lot of throwing up into porcelain things."

That willingness to expose himself in unflattering ways is a hallmark of the book, in which Moby explores how his rise to fame related to an internal search for validation. "Whether it was the early dance scene in New York, or New York itself, or the rave scene, or Christianity, or sobriety, or drunkenness," he says, he was looking to belong.

Moby spoke with NPR's David Greene about finding his way from local buzz to international fame, and how the difficulties of his childhood still informs his creative process. Hear their conversation at the audio link, or read on for an edited version.

David Greene: Of all the places to start a memoir about yourself, a successful musician, you decide to start with the memory of you and your mom in a laundromat in Connecticut, back in 1976. You were 10 years old. Take me to that place.

Moby: I grew up in a wealthy suburb, but my mom and I were very poor. We were on food stamps and welfare until I was 18. There was such a stigma of shame around that; I felt it, and my mom felt it. And the book starts with my mom in a laundromat, washing our clothes and also washing the neighbors' clothes, because sometimes the neighbors would pay us to wash their clothes. Sometimes I would help her wash and fold. But in the beginning of the book, I'm sitting by myself in our beat-up old Chevy Vega, spinning the radio dial while the rain is falling on the roof, and I find this Diana Ross song. And so I heard the song "Love Hangover," and there was something futuristic about it. It made me think of this urban environment with confident, urbane people who knew exactly what they were doing. And it stood in such sharp relief to the sad, suburban environment I lived in.

You were looking for some kind of escape from being there — outside that laundromat, your mom smoking cigarettes and doing someone else's laundry?

Yeah. I mean, basically, that was childhood: pretending that I could go to school and not be ashamed of the Salvation Army clothes I was wearing, and looking for anything — whether that was books, or science fiction, or the radio, or music. I remember we had one art book: An ex-boyfriend of my mom's had given her an Edward Steichen book. And I would go through this book obsessively, because everything in it just seemed interesting and erudite and sophisticated.

And then you find your way to a different world. Remind me how you got your start DJing in Manhattan.

After college, I started DJing a lot and got really involved in the world of hip-hop and house music, but I was DJing at tiny little clubs in Connecticut. One day, I heard about a nightclub that was opening in Manhattan, and I made a demo tape and snuck in on Metro-North, on the train, to go to Manhattan and drop off this demo tape.

Hiding in the bathroom sometimes, right, on that suburban train?

Yeah, I'd hide in the bathroom so I wouldn't have to pay five dollars. So, I get to this nightclub. No one had told me that when you want a job as a DJ, you don't give them a demo tape. So I handed the demo tape to the HR people, and they just started laughing at me.

But you went in there just asking, "Do you have a DJ application?" I mean, you were just ready to apply like it was a job in a restaurant or anywhere else.

Yeah, I was standing in line with the busboys, and the bartenders, and the doormen, trying to get a job. I just thought there would be a DJ application that I could fill out. But luckily, I got a job out of it anyway.

You describe life in New York City, and living sometimes in apartments without running water — these scenes that many people who don't know and love New York would find completely miserable. And then you say at the end, "Life was so perfect."

In a maybe potentially self-effacing way. I thought, "Okay, if someone reads this book, and either they hate me, or they don't know who I am and have no interest in me, at least maybe the way New York is depicted in the book, and the way the dance scene is depicted, will be of interest to people." But living in New York, then, I mean the city was ravaged by — there was an AIDS epidemic, there was a crack epidemic, there were gangs everywhere. It was this bizarrely egalitarian, chaotic environment, and it was so cheap that anyone could live there. So all of my neighbors were artists, writers, musicians. And it just felt like this bizarre, cloistered — almost like a walled, dysfunctional creative city.

You mentioned that you hoped readers would like how you wrote about New York even if they didn't like you.What does that say about you?

[Laughs] Well, I could put you in touch with my therapist, they could probably answer that pretty well! I think it's possibly the legacy of growing up as a deeply ashamed poor kid. Even in adulthood when your circumstances change, the core of who you are, and your core assumptions about yourself, largely remain.

The book is so self-deprecating — is that where that comes from? You just feel that that was sort of how you had to be, because you don't think that highly of yourself?

To a large extent, probably, yes. In fact, the funny thing about that is my book editor actually had me tone down the self-deprecating qualities in the book. I had to be prodded to write about things, and even write about myself, in a positive way.

You write about one night when you were pretty afraid of getting fired. You were working at a club and a big hip-hop star showed up.

Darryl from Run-D.M.C. came in, and I handed him the microphone.

This is a huge deal, that he's up there with you.

Huge deal! So there's me, this 23- or 24-year old, long-haired white kid from the suburbs, playing in a house music and hip-hop club to an almost exclusively African-American audience. The first five minutes was great: I played some James Brown records, and freestyled, and the crowd was going crazy. And then, at some point, I played a Run-D.M.C. record. And he got all excited, the crowd got all excited — and I bumped the needle. It went skittering along and created complete dead air, and silence. He threw down the mic and yelled at me and stormed out. And I was just sure that this was the end of my career. But luckily, my boss on this one night didn't care that I had humiliated myself in front of 500 hip-hop fans.

So you were able to recover and move on?

I was able to recover. I mean, the night ended with an even further debasing moment involving a cockroach. But this was New York in 1989, so, like, things happened.

This book covers so many rough patches when you're doubting yourself — and it actually ends before your breakthrough album,Play, even comes out. Does that tell us that you're more comfortable writing about and living in the tough moments, and not so comfortable thinking about your success?

Largely, yes — and I think it's, again, a product of upbringing. My mom was an amazing painter who never had any success. Some other people in my family were great musicians and great writers, and they never really had much in the way of external success. And so, when I was growing up, I just thought I would spend my entire life maybe teaching community college, making music in my spare time — you know, making music that no one would ever hear.

So, even now, it's still surprising to me that I can make something, whether it's a book or a record, and some people are willing to pay attention to it. There's something very familiar, and almost comforting, about a degree of failure and obscurity. When I've had times in my life when I haven't failed or labored in obscurity, it's pleasant. But it seems very unfamiliar.