Artists are always trying to find ways to motivate themselves to complete projects. For Andrew Barnhart of Saint Solitaire, not shaving until he released an EP was the motivation behind the last two Saint Solitaire albums.

It took Barnhart eight months to put together his unfinished musical thoughts into a layered, indie-dance-pop EP worthy of only the hippest of dance-halls - and grow a kickass beard.

Barnhart decided he needed some motivation to release an album - so he decided not to shave until the release of the first album under the name Saint Solitaire, titled Full Artistic Control.

Barnhart produced the whole thing solo and got a band together for the release show at the Blue Lamp in March 2013. There’s where he shaved his eight-month beard.

“I didn’t realize I’d grow such a great beard,” Barnhart said. “People were mad when I shaved it.”

More than a year later, Barnhart’s beard is back and Saint Solitaire has a new EP. The band is releasing Versus Resistance Saturday at a private backyard concert where Barnhart plans to have his face shaved during an instrumental song.

“I didn’t really enjoy working on the first EP alone,” he said. Rather than just Barnhart and a computer, some of the ideas required a full band of live musicians.

One of those tracks actually shares the title of the first EP, Full Artistic Control. Barnhart felt he just couldn’t do the song justice without a full band, and rather than put it out before it was ready, he waited. And now, here it is:

Saint Solitaire consists of six musicians, each adding a unique vision and voice to the sound. Guitarist Peter Miller, James Murphy on bass, Chris Karriker works the turntable, Dave Jensen plays drums, and Jarrod Affonso is on keys and vocals. Kat Reilly lends her vocals occasionally, and she’ll be shaving Barnhart’s beard during the concert. Barnhart focuses on singing and performing.

Barnhart said he really believes a band should be like a family; the ability to speak openly and honestly and push each other toward better things is crucial to making great music.

“Who we’re going to be is determined by the people around us,” explained Barnhart at a private listening party for the new album at Kupros Bistro in Midtown Sacramento. “I want to do what I love and how can I do that without being in a family?” 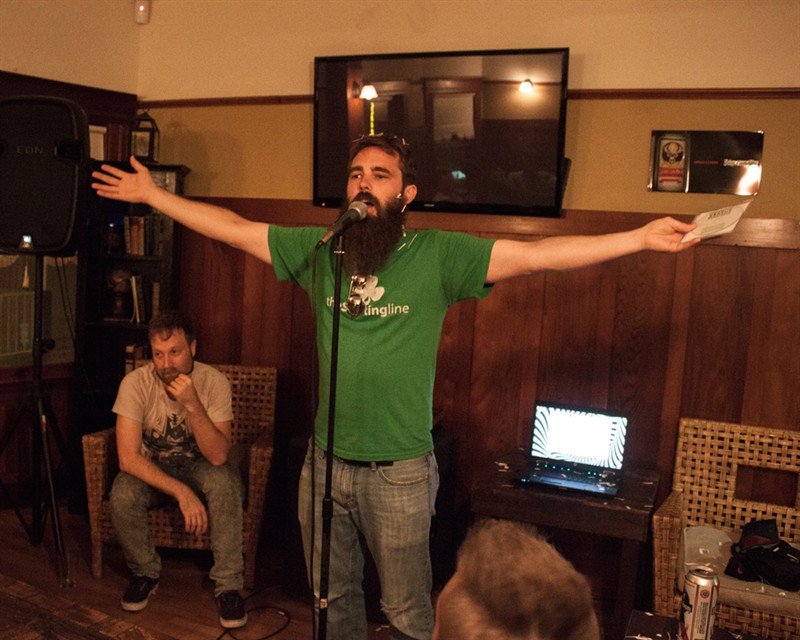 Chris Blomquist attended Saint Solitaire’s listening party Wednesday night. He plays with Barnhart in another band, Odame Sucks, and said he really enjoyed hearing the final version of Versus Resistance.

“Andrew is one of my inspirations as a songwriter and musician,” Blomquist said. “[The album is] danceable, smart and expresses valid emotion."

Blomquist said he was particularly impressed at the quality of the production. “[Andrew] mixed it all himself. That to me is so incredible given the polished nature of the album.”

Visit Saint Solitaire’s website for upcoming performances and to buy the CD.