Adrian Bourgeois And Ricky Berger - The Back To Sac Show 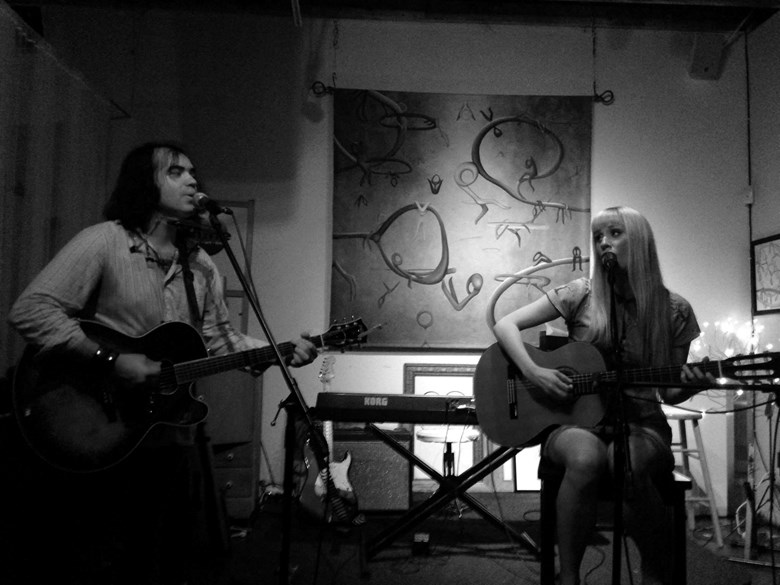 Adrian Bourgeois and Ricky Berger playing Bourgeois' farewell show at Shine back in May of 2013.

Sacramento is home to many talented musicians. Groups touring the world, releasing stellar albums and winning over fans from far and wide – but all too often an artist feels the need to relocate in order to move their career forward. This feeling struck singer/songwriter Adrian Bourgeois and indie-songstress, Ricky Berger spurring them both to move to Los Angeles.

They’re back this weekend to play a show at Luna’s to connect with old fans and friends. We were able to reach them at Berger’s Silverlake apartment before they made the trek north.

“I’ve been writing a lot of songs,” Bourgeois said. “A lot of these songs have had a more transitional and soul searching, more personal, feel to them than I’ve written in a while. Anytime you make a big external change obviously there’s a big internal transition as well – I think a lot of that comes through in writing.”

He moved to Los Angeles a year ago and said this first year there is all about transitioning and figuring out how to live in a new city. He made some connections before moving, and that’s helped him set up shows and meet new friends.

Before moving to LA, Bourgeois was living at home to save money and working on a new album Pop/Art. With the album wrapping up and the connections in place, Bourgeois said it seemed like the right time for a move.

“The verdict is still out to see if this was a great move,” Bourgeois said. “It’s an inspiring place to be. I’ve come to appreciate it a lot more for what a vibrant place it is.”

Bourgeois said we all know of great Sacramento music success stories – Deftones, Cake, Jackie Greene – but he says it’s different for every artist. The decision to stay or go hinges of a million varying factors, each completely unique for every musician.

“I think there’s a really great scene in Sacramento,” Bourgeois said. “I think there are a lot of awesome artists. I don’t know if there’s enough of a culture there of people going out and supporting those artists.”

He said he was getting to the point where he could draw a good crowd of 100, but kept wondering, “what next?” He said in a city like LA there’s a great chance that of those 100 people at that bar show one might be connected to a TV show or movie and can get your music in front of the right people.

“I hope people don’t exodus Sacramento completely,” Bourgeois said. “If it continues to be a struggle to have a unified music scene and get people out – I think you’re going to see a lot of the stronger artists leaving to seek more supportive communities.”

“At this point I kind of understand,” Perry said. “Sacramento does not currently have the infrastructure for artists to grow. Not that it can’t happen, it happens in spite of its self.”

Perry ran a venue called the Cattle Club in the 80s and 90s. At the time they didn't have as much competition. Now, he says, concert goers are spoiled and overwhelmed with choice.

“I think there are too many venues and the bands are overplaying those venues,” said Perry. So bands move on, in hopes of bigger crowds and better shows in other towns.

Booking agent for Shine Cafe and local musician Lob Instagon has booked Bourgeois a number of times at his venue and echos a lot of Perry's sentiments. He's seen a number of bands transplant to Austin, Portland and Southern California.

“They get bored here. It’s a small market,” Instagon said. He also sees an overall problem with the number of venues. People are spoiled for choice in the central city, and folks from the surrounding burbs don't come out for shows. Venues expect bands to bring in a following and bands are hoping to gain a following from playing at venues.

As for the transplant trend, Instagon actually transplanted from Southern Caifornial to Sacramento in 2005.

“Ricky and Adrian are both of an age where the glamour and the dream of the Hollywood music scene still exist," Instagon said.

Instagon doesn't really have that dream anymore, the industry has just changed too much.

Time will tell if this was the right move for Berger and Bourgeois. Until then, you can catch them Saturday night at Luna’s Café (16th and N streets) opening for David Houston. Showtime is 8 p.m.