Jessica Dimmock / Courtesy of the artist

07/01/14 | Electronic music mega-star, Moby, was added to the star-studded lineup of acts performing at TBD fest, according to SacTown magazine.

Last week we got word of what was thought to be the full lineup; which included 80's icon, Blondie and electronic duo Justice.

In previous years this festival was called Launch and held in Cesar Chavez Park in downtown Sacramento. This year, festival organizers renamed the event and moved the venue to the yet-to-be-built Barn on the river front in West Sacramento.

We compiled a bunch of songs from the groups performing at TBD, so give it a listen, you might discover a new favorite band.

06/25/14 | The full lineup for TBD Fest was announced today, with 80s Post-punk pioneers Blondie  and French electronic duo Justice headlining. This is a significant jump in the household name category compared to years past.

Other bands just announced: Deltron 3030, Kurt Vile & the Violators, SF lo-fi powerhouse Nick Waterhouse; locals Autumn Sky,  James Cavern and Sister Crayon will also be on stage. TBD is shaping up to be an even bigger who’s who of emerging and established bands.

TBD is scheduled for October 3-5 in West Sacramento. 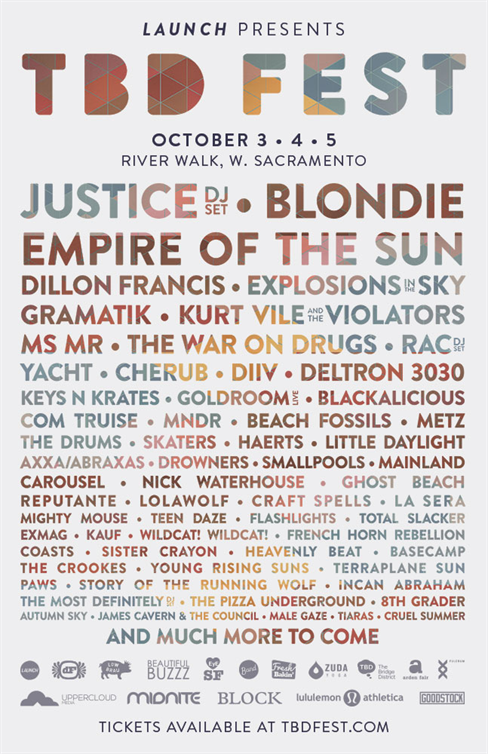 Melody Stone and Nick Brunner contributed to this story.