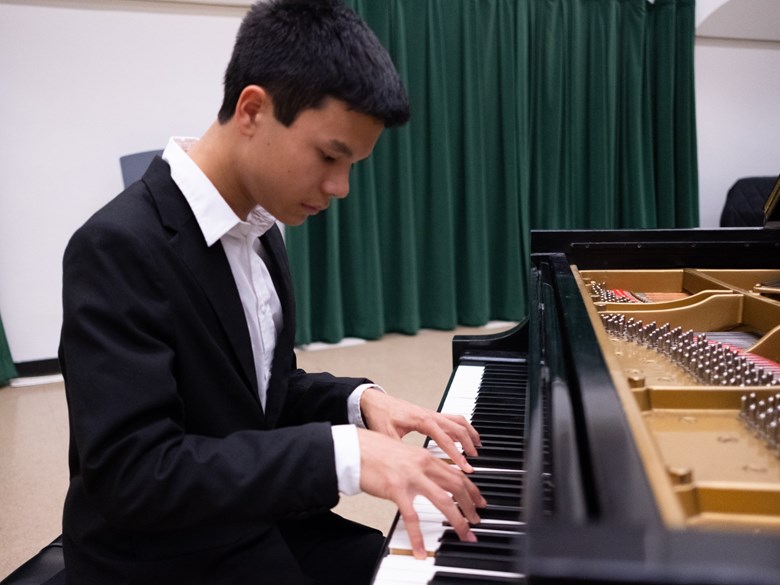 He’s already established a career touring the world as a solo concert pianist. And last month, prior to the restrictions of the COVD-19 pandemic, Parker traveled to Florida to become the youngest competitor in the National Chopin Competition. He surprised everyone by not just winning first prize in the Best Sonata category, but also taking third in the overall competition, automatically entering him in the International Chopin Competition in Warsaw, Poland, taking place later this year.

That’s a lot of pressure to put on a young person! But he doesn’t really see it that way. For him it’s just ... sharing. He says it’s just another run through.

"The judges are human and enjoy music too," Van Ostrand says "It’s not about being perfect, it’s about bringing this music to people. Going through the emotional experience with them, in the moment.”

His performance above is the first movement of Chopin’s second Piano Sonata that won him top honors in the sonata category of the competition. Parker paints a beautiful picture with it: for him, this Sonata is the whole life (and beyond) of some sort of hero.

“There is a lot of struggle and a lot of conflict in [the hero’s] life, which is kind of shown in the rhythmic aspect of the piece and the minor keys," he says "But then he achieves some kind of victory at the end, there’s a big transformation! At the end is the funeral march for the hero and that includes memories of the first movement, when he was still alive. Then the eerie mysterious grave, and the wind. It’s spooky.”

It turns out that Parker has a lot of wisdom to offer the world. He insists that he doesn’t know if doing too many competitions is healthy, actually.

“It’s important to focus on performing, and learning and improving rather than just trying to compete,” he says. “I don’t think a tense atmosphere is healthy, I think music wasn’t meant to be competitive, it was meant for people to listen and enjoy and feel the emotions that you play.”

Are you now picturing one of those reclusive kids who doesn’t socially interact and who is alone at their instrument eight hours a day? Think again! Parker is incredibly well-rounded. He is active in his high school and loves being on the track team. He has a goal to run a full marathon sometime soon. For him it’s all about time management.

“I don't want to sacrifice any of what I have now, I want to do it all to the best of my ability," he says. "So I have to manage time well.”

Parker was already studying piano by age 5, and is currently a student of local Steinway artist Natsuki Fukasawa. He thinks the piano has a lot to offer since it’s such a big instrument and can represent the whole orchestra.

As a side note, I'm a professional pianist as well, and have even had a few lessons with Parker's teacher! The music world is small, so I have a hilarious story about how I met Parker, well before this interview…

Last year I toured the Baltics and Scandinavia as a guest orchestral pianist with the California Youth Symphony. Parker was also on the tour, as the featured soloist. In a normal concert situation, I would have my own piano as part of the ensemble, in the back of the orchestra near the percussion section, and the soloist would have a fabulous grand out front.

Unfortunately, this orchestra was so large and the stages in that area of Europe so small, we couldn’t fit two grand pianos on stage! There was room only for the solo piano out front, which meant that, after Parker went out and played his huge concerto and blew everyone away, I had to also walk out to the very front of the stage, where every night inevitably the audience assumed I was a second soloist and applauded me enthusiastically, only to be then quite confused when I, in fact, did not perform a solo, only the background piano part with the rest of the orchestra! So that's how we got to know each other.