Recreating A Bach Kaffehaus Through Twitter, Skype, And Lots Of Caffeine 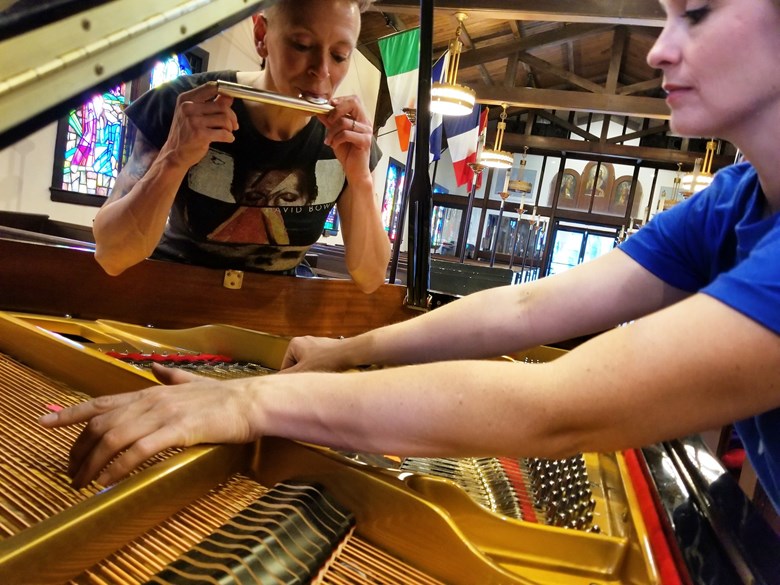 CapRadio Classical Host Jennifer Reason is also a professional pianist, and often travels around the world to play. Today she shares a look behind the scenes of what it takes to be on the road as a classical musician.

Travel is the best part of my job as a musician. Getting away and out on the road for a while, often making music with people I’ve never met, seeing new places, trying new foods, and having new adventures… it gives me life.

I started traveling internationally back in 2002 and I’ve been lucky enough to see a lot of the world this way. I can’t take every project that comes my way, but when offered the opportunity to premiere music by a living female composer, complete with invented sounds, performed in the tradition of J.S. Bach, and on the coast of Florida... sign me up!

Clare Shore, that living female composer, is none other than the second woman ever to graduate from Julliard with a doctorate in composition. She’s a pioneer. That would be reason enough for me to want to work on this project.

But education isn’t all she’s pioneering. I was chosen to give the world premiere of her latest work, "Intensities of Degrees," which pioneers new soundscapes. It is all about temperatures that happen on earth (and their corresponding colors), so the movements have the following titles: White Heat, Glacial Blue and Ecco la Verde.

She was looking for us to use our instruments — flutes and piano in this case — to create sounds that have not been done onstage before. Color me intrigued!

The third component of pioneering was the one that really hooked me though. Clare has also founded a “new” type of series for composers and performers by looking all the way back to Bach for guidance: Zimmerann’s Cafe.

Bach was big on roaming around with his friends, playing their newest music in cafes and taverns, so why shouldn't we? He especially liked a place called Cafe Zimmermann. He had just moved to Leipzig and Cafe Zimmermann was the largest kaffehaus there.

The middle classes could come as well as women, who were barred from coffee houses normally but were allowed to listen to music there. The shows were free and funded by sales of coffee! Georg Philipp Telemann, another famous composer, already had his Musicum Collegium there before Bach arrived.

One thing that Bach didn’t have at his disposal, though? Twitter. Twitter has fostered a traveling musician career for me like no other medium. It’s rich with composers, performers, creatives and educators, all looking to get together and collaborate.

For this Florida project, in which Clare so wonderfully recreates a modern-day Zimmermann’s Cafe, everyone involved was on Twitter and hailing from multiple places across the country. In fact, we had to learn this music together from afar, via Skype, off recordings, and lots of phone calls! It’s a whole new world out there.

Here’s a look into a typical week on the road for me, as well as the fantastic process of creating brand new music on this trip.

This was a long day of travel! My friend and collaborator — flute player Cathie Apple — accompanied me on the flight from California, a red-eye no less! They had promised our Airbnb would be ready when we landed at 6 a.m., but of course, it wasn’t! There was a silver lining though. I got to see something this West Coast girl doesn’t usually experience: Sunrise on the ocean. Best to just drink coffee and enjoy it. 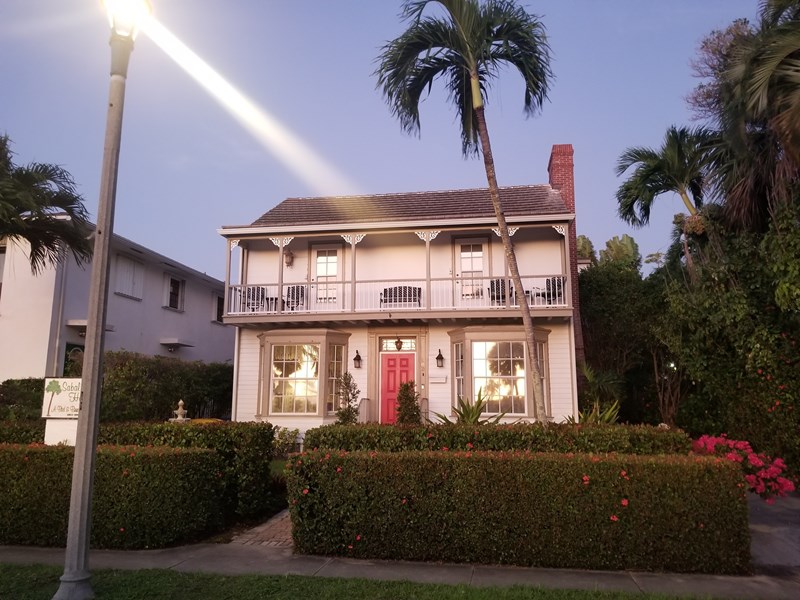 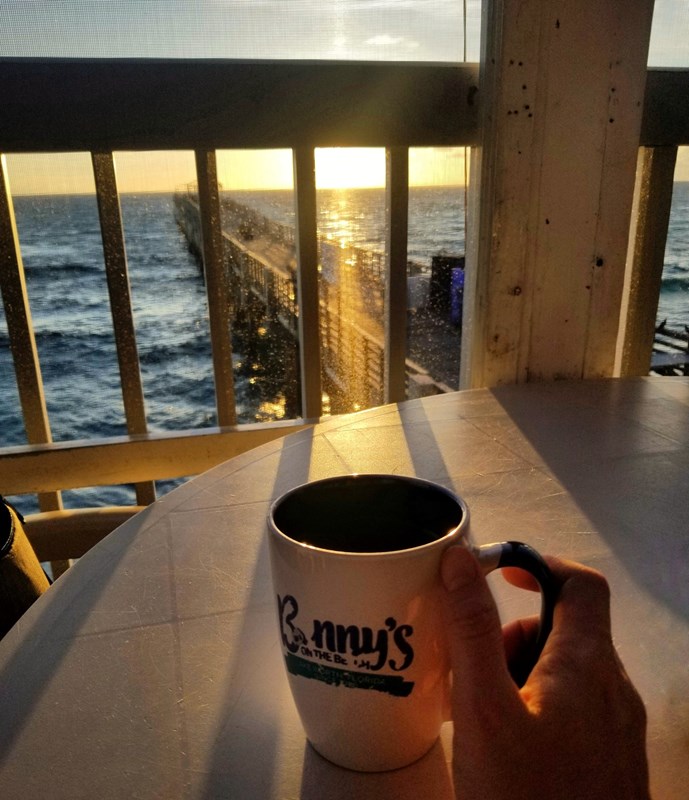 (Above) Jennifer waits for her room to open up. (Below) Watching the sunrise over the Atlantic.
Jennifer Reason / CapRadio

By noon, it was time to go to work. We’d been rehearsing in California and sending Clare Shore, the composer, questions via recording and email. Today was the first time she’d heard it in person. Yes, we were thinking “What if she doesn’t like it?!” Luckily, she was so happy. Phew!

After six hours of intense rehearsal, we headed off to get familiar with West Palm Beach. (Travel tip: It’s important to find a favorite coffee shop as soon as possible). We fell on our faces in bed at 8 p.m. only to wake up at 3 a.m. Oops.

The owner of our Airbnb cooked us breakfast, after which we walked to the venue to get started on the extended techniques in our piece, i.e. the ways in which the instruments are used unconventionally. One of the coolest parts of this gig was that we got to invent some of those extended sounds we used! This particular piano didn’t really want to cooperate though. 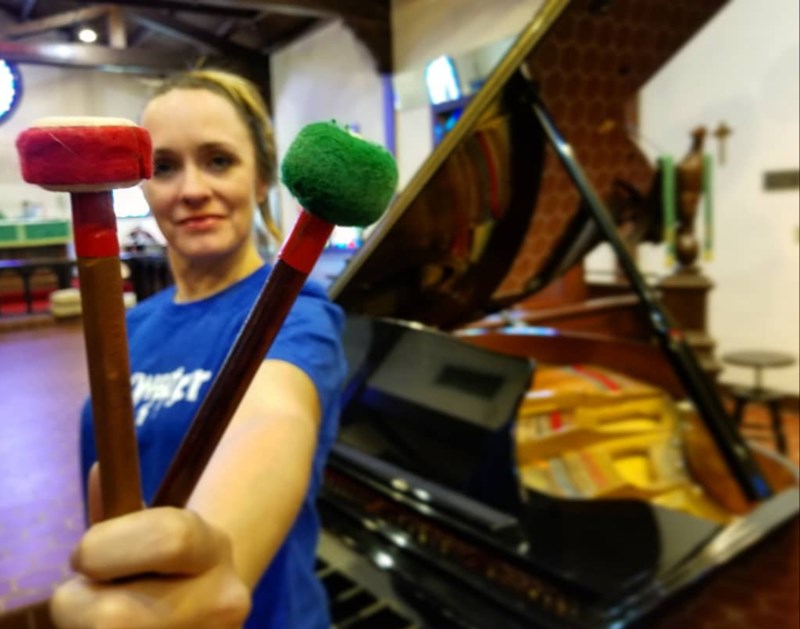 How do you play a piano unconventionally? Use some mallets.

This session was also six hours of hard work, but with a twist: our recording sessions kept getting ruined by pounding torrential downpours and explosions of thunder! We also kept getting distracted by the literally hundreds of lizards that would bizarrely come running out of bushes the second the rain would stop.

We rewarded ourselves for making it through by finding a cantina nearby that had $10 bottomless happy hour. I’m sorry, why don’t we have that here at home?

This piece is for two flutes and piano. As I mentioned, Cathie came with me but today is the first day with the second flutist Misty Theisen, who came in from North Carolina. We tried the piece together for the first time ever the day before the show, and yes that’s as stressful as it sounds!

Between Clare, Misty, Cathie and myself we were spread out over three states, so you could imagine the challenges faced during the initial rehearsal process. I’d made a recording of myself playing the piano part with a metronome and sent it to Misty to play along with, after which we’d talk by phone or Skype or other video exchanges. Now we had to see if we could actually play the piece together in person.

One detail? That night I realized I needed a book to hold up my iPad inside the piano, since the music rack was in the way of my playing the piano strings. Ha! The things we do! It’s amazing to be an active part of the creative process, rather than just reading something old. 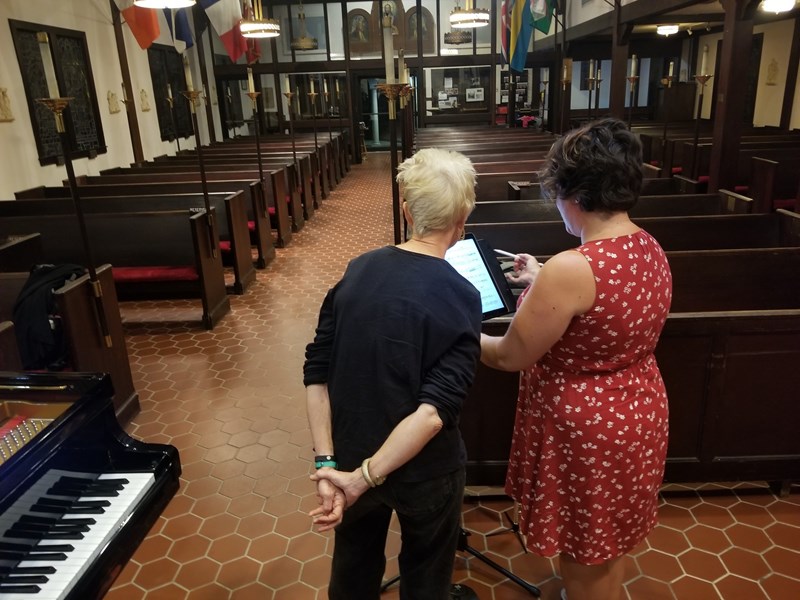 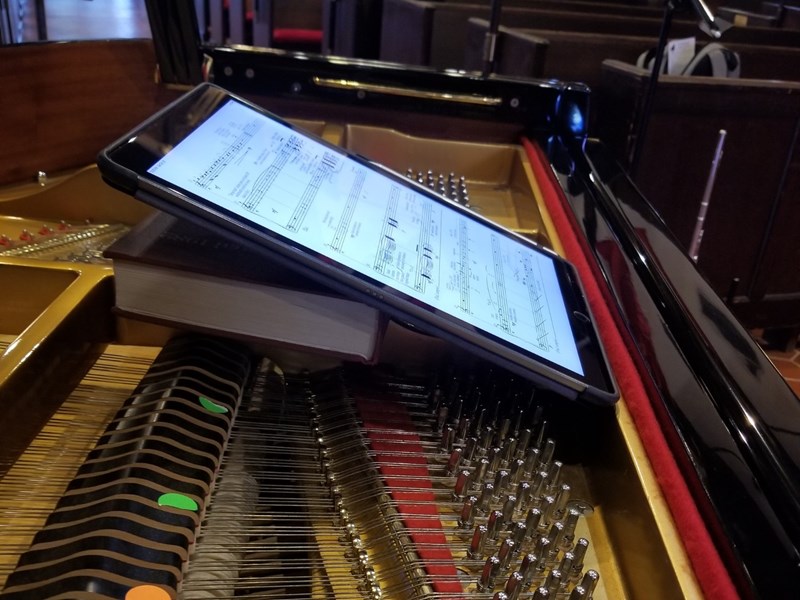 (From top left) Composer Clare Shore and flutist Misty Theisen go over last-minute details. One of those details? How to display an iPad inside a piano.
Jennifer Reason / CapRadio

Show Day started out with a cool interview with composer Clare. Then I put my feet in the Atlantic because this California girl had to! We had a final hour of rehearsal then hid out while the audience started arriving. 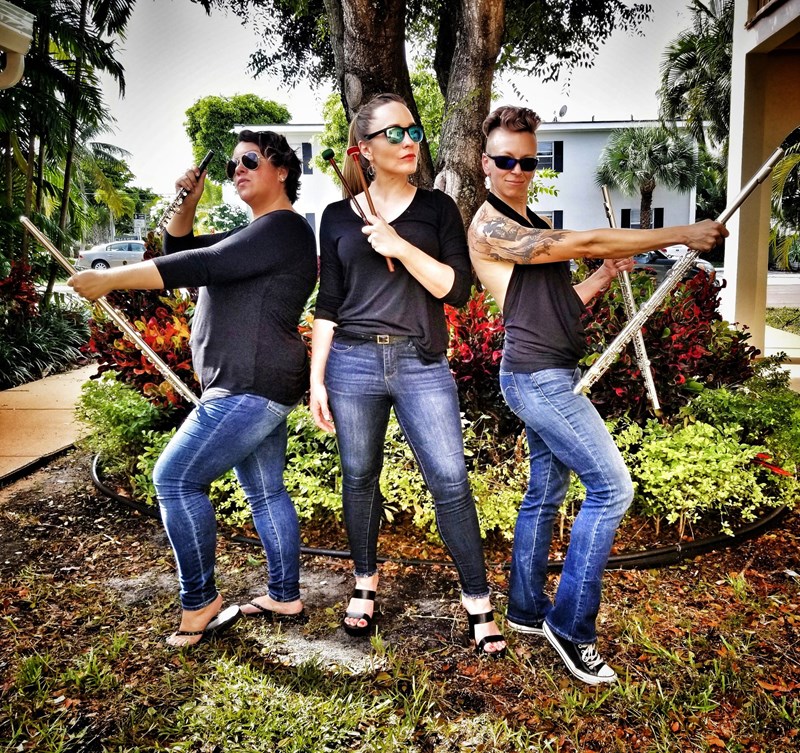 Hiding = practicing our Charlie’s Angels poses in the garden

Composers, performers and attendees converged. Clare founded this Zimmermann’s Cafe in Florida with a friend, and it is full of wine, coffee, food and new music only! It’s been held at St. Andrew’s Episcopal Church since its inception several years ago. The audience is free to eat and to engage performers in conversation and questions, and everyone is dressed casually, just the way it used to be back in the 1700s. It was a full house!

The performance was full of music by composers of all ages, and performed by incredible musicians. It was also cool to see yet another composer from Twitter, Olivia Kieffer, with whom I’ve been conversing for three years but have never met. She had brought a piece for two toy pianos!

There is no greater pressure than being trusted with the World Premiere of a work, let me tell you. But Intensities of Degrees with Cathie and Misty went, proudly, extremely well. In fact, it was some of the strongest moments I’ve felt on stage musically! Except for one thing.

Right in the middle of our invented wolf howl, in a quiet spooky part of the piece that had everyone sitting entranced, someone’s cell phone went off! Not only was the moment destroyed, you can’t redo a world premiere recording! That moment exists in time once and once only. And that, I suppose, is the downside to a more casual setting. 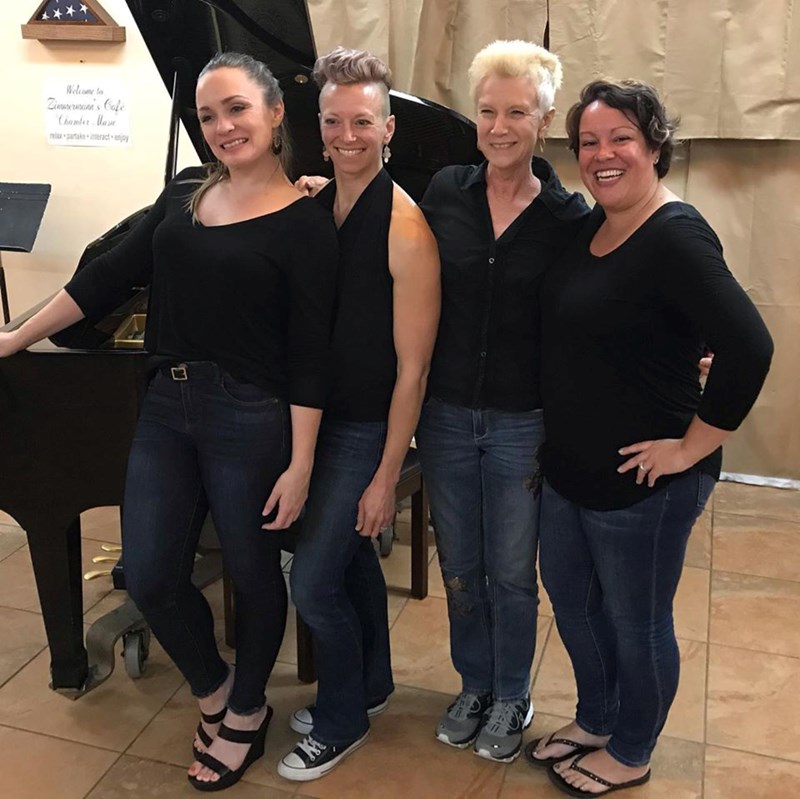 (From left) Me, Cathie, Clare and Misty at the performance. Loren Kerns / Flickr

Overall though, we all walked away still so very happy with the entire project! Here are a few snippets of the music while we wait for the release of the official, albeit now sadly ruined, recording.

After some quick handshaking, I ran straight from the concert to the airport to catch another red-eye (I literally had my suitcase backstage with me), which resulted in an eight-hour layover in Las Vegas without my bags. Ugh. Thank God for the jacuzzi tub in my hotel room! (And an even bigger sigh of thanks for the several times TSA Pre✔️ saved me from missing my flight this trip!) I came straight to CapRadio from the airport, as one does, and carried on as if I’d never left.