Full Circle: When Being A Professional Musician Means Taking The Stage With Your Idols 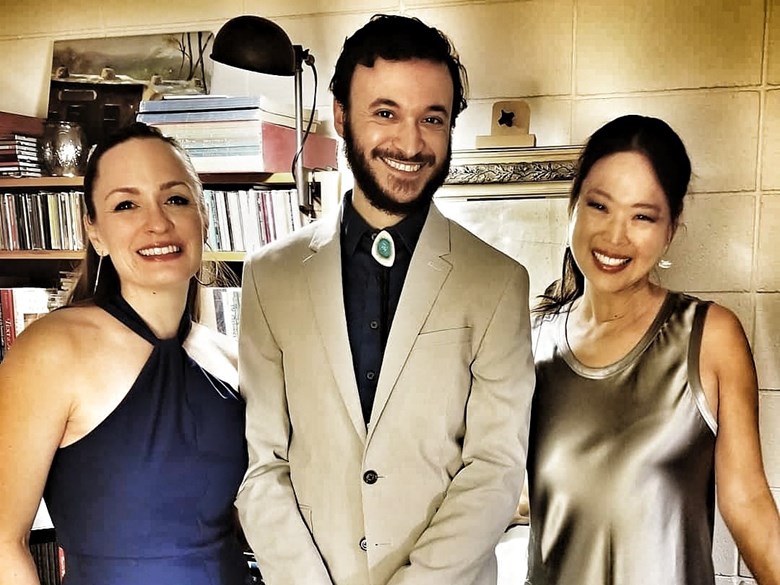 CapRadio Classical Host Jennifer Reason is also a professional pianist and often travels around the world to play. Today she shares a look behind the scenes of what it takes to be on the road as a classical musician.

I go on performance trips and tours all the time. They’re usually routine work, though. Rarely do they represent a life culmination of any kind. This past trip was different. It was what can only be described as a full circle moment, and it was truly something special.

In 2002 I was in my first year of undergrad at Sacramento State, just starting out on my own degree in piano performance, when I was introduced to the Ahn Trio. They came to give a concert at where I was studying and it was one of the first concerts I saw as a music major.

And my baby self was floored! Here were three young sisters from Julliard who had formed a professional piano trio, were touring the world, playing flawless concerts with classical, pop and contemporary compositions alike (breaking the “rules”!), and dressed to the nines. I was hooked. From that moment on, I decided I also wanted to play with my sisters, wear fabulous outfits and have a worldwide career in interesting, cutting edge chamber music performance.

So, you can imagine my joy (shock, terror) at finding out I would be sharing the stage with one of the Ahn sisters during my Guest Artist residency at Montana State University this month!

Here I was, long since done with that music degree, indeed now touring the world myself, indeed now performing with my own sister (hopefully indeed fabulously dressed as well!). And now I was about to share the stage as a colleague with the very woman who had inspired me so long ago.

The Why Of It

So, why would I take a week to go to Montana in the first place? After all, it’s freezing there (literally) and I am a born and raised California girl! 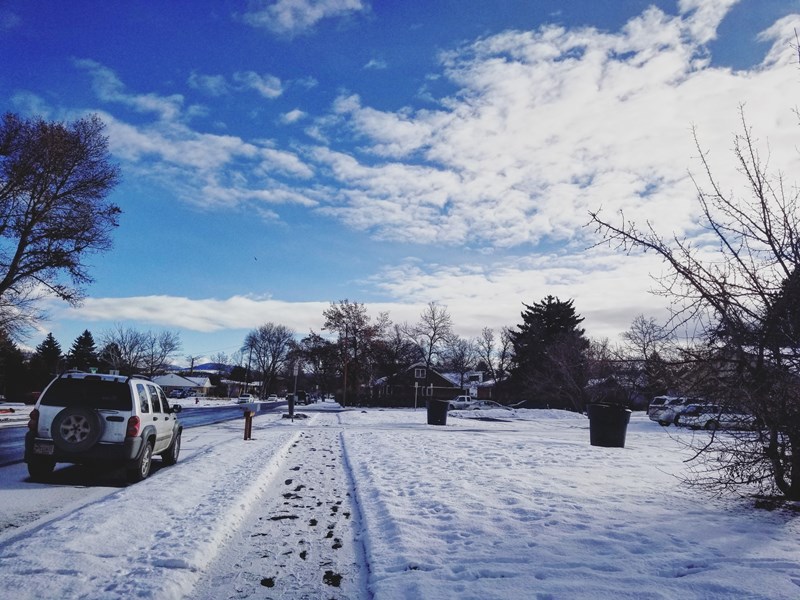 We opted to walk 30 minutes to rehearsal every day, and here’s what it was like. I shouldn't really complain though, it was actually quite gorgeous. And aside from my hands getting way too cold, it was invigorating to walk in the brisk outdoors.Jennifer Reason / CapRadio

How this all came about is very much indicative of how a career in the arts works: word of mouth.

Last year I went to Montana to play recitals with Dorian Antipa, a bassoon player there whom I had gone to school with. We covered 700 miles of the state playing, and at one of those performances was Mike Nelson, horn professor at MSU. He was quite inspired by what he heard and asked to work with me as well the following year. He added on a second tantalizing layer though: If I came back, I’d also get to do a mini guest artist residency at the university and work with their music majors via master class, seminar, and recital formats.

Perhaps you gathered from above, but I have deep recollections of professionals doing that for me when I was a student, and it has in turn become a passion of mine: to also provide students with inspiration and guidance, in a way their daily classload may not be covering. So of course I accepted.

There is a huge gap between college musicians and working as a pro. You would think a music degree would include the basic how-to’s, but sadly that is most often not the case, any more than most high schools provide basic (but necessary) life guidance like budgeting, navigating insurance, buying a car, and the like (Mine sure didn’t, did yours?).

You spend your music degree slaving in the practice room alone, completing coursework and an occasional recital you had the luxury of half a year to prepare for. Then you graduate and are immediately confronted with contracts, bills, negotiations, competitive lack of work, gigs you have only two days to prepare for ... and most give up right then. Or, if they don’t quit in favor of that safe and sensible day job, they flounder around wide-eyed, shooting in the dark and making many mistakes.

So rather than cover ‘playing music’ when I do these sorts of talks, I cover those glaringly absent topics. The ‘real life’ side of professional music making. The “Hey, did no one tell you that you aren’t going to just get to play your instrument all the time, you’re going to have to also be your own attorney, advocate, insurance agent, marketer, booking agent, secretary, and payroll office? Well, here’s how you do that” type of stuff.

We also cover a lot of self care topics: treating your body like a machine you would like to last a long time; knowing that being a musician is athletic and requires proper training and rest; and of course prioritizing mental health in a career that is hyper-critical and cold a good amount of the time.

I have to say, the students at MSU were particularly receptive and prepared for this sort of coaching, and I loved getting to know them where they are in each of their personal journeys. And of course, I loved using their beautiful stage and instrument too! 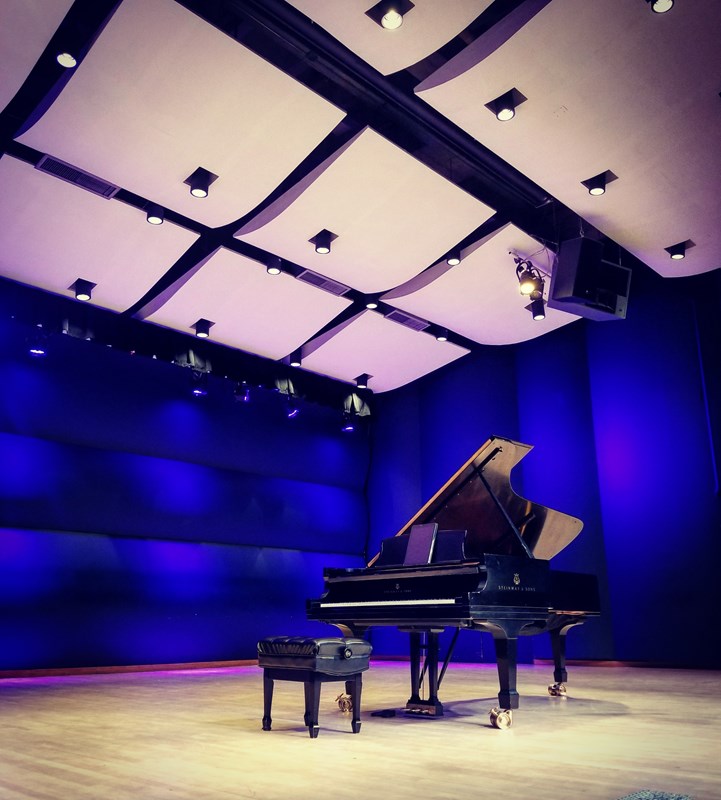 This 9ft Steinway was a dream to play, and don’t you love that blue?Jennifer Reason / CapRadio

The Man Who Started It All

But back to professor Mike Nelson, the originator of it all. Without engaging in hyperbole, I genuinely think Mike might be the best horn player I’ve had the pleasure of working with so far in my career. His musicality and tone, his stamina (brass instruments are hard — people’s lips get tired quickly!), his performance skill and onstage wit, all of these contributed to an extremely professionally satisfying set of performances together.

Also, he can do something I had never heard of before: play CHORDS on a horn! Check out the video to see how he does it.

I have to confess: Mike put together one of the hardest programs I think I have ever played. It challenged my own stamina and technical skill in a way that hasn’t happened in a long time.

There were several orchestral reductions to wrestle with. In music-speak, that means the piece is not originally written for piano, but instead for the full orchestra. Someone came along and condensed all those notes for all those instruments down into one part, and that’s what I had to learn. Three of them no less!

Add on to that the pressure of stepping onstage with a world renowned musician and personal idol like Angella Ahn, and … well, I might have a bit of grey in my hair now!

Trio for Violin, Horn and Piano

Concerto for Horn and Strings

I am grateful to Mike for bringing us three together though. He had been trying to make a collaboration with Angella Ahn happen for four years before this and it finally happened, when I was there no less! (Kind of makes a girl feel it was meant to be, you know?)  Angella was a blast. We just had so much fun. We laughed and laughed, and she was kind enough to give me an interview as well! (check it out, it’s full of… more laughing.)

I’m happy to report that while it may have been the hardest professional concert in a very long time, it was also one of the best! My nine-hour practice days leading up to the trip paid off and we played extremely well, if I do say so myself.

The audience agreed by giving us three curtain calls, and those three curtain calls were music to my ears. I admit I would have been crushed in spirit to have this full-circle career moment and to have not delivered! I certainly fought off anxiety about that in both dreams and waking hours. But deliver we all did, and I have that incredible moment of achievement now to keep in my heart always.   Here we are, all flush with victory (and relief!).

I’m invited back to work again in Montana soon, and I’m looking forward to it. And this time I’ll remember a few non-musical tips I picked up as well: they wear sunglasses at night when the snow is coming down right into your eyes, they prefer bison pepperoni and beer, they don’t care much for Californians (we are overrunning the state with our California money and liberal ideas apparently), and I should leave time to lounge in the hunting lodge that is Bozeman’s one airport baggage claim!