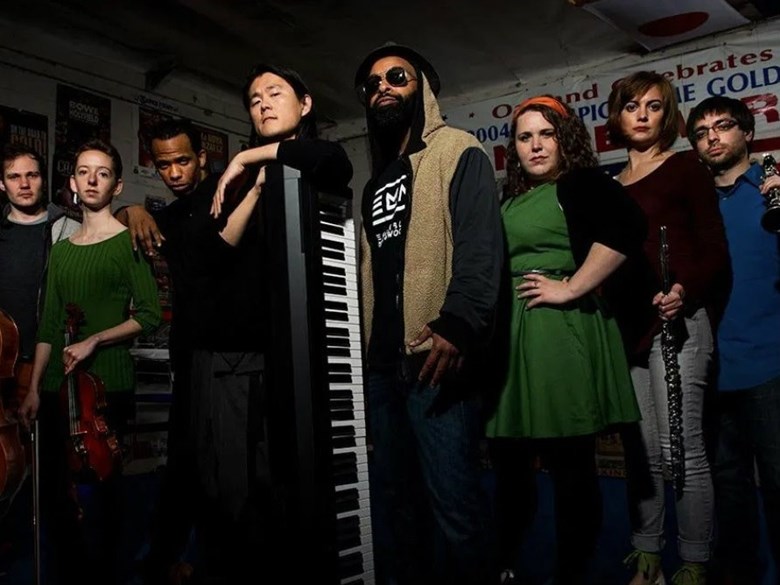 The Oakland-based Ensemble Mik Nawooj plays hip-hop and classical together.

The epitome of musical diversity just might be an Oakland-based group that plays hip-hop and classical — together.

Called the Ensemble Mik Nawooj, the group performs on Wednesday, December 4, at 7:30 p.m. at Sacramento’s American River College, backed by the ARC Orchestra.

The idea for Ensemble Mik Nawooj, or EMN, came from JooWan Kim, a pianist and composer originally from South Korea. Fifteen years ago, he was a disillusioned classical music student attending the San Francisco Conservatory of Music and wanted to find a way out. So, he wrote a piece that brought together strings, woodwinds and a rapper.

“I was thinking, ‘What’s going to piss off the most, the teachers?’” Kim recalled. “And I thought ‘You know, if I bring hip-hop into the concert hall, I’m sure they will be upset.’”

It worked: Kim’s teachers were perturbed, but at that point he didn’t care. He says he was disenchanted with what he calls the Eurocentric concert music aesthetic he was learning and found inspiration from socially conscious rap like NWA’s protest song against police brutality, “F*** the Police.”

“It totally moved me,” Kim said. “It was sort of like a religious experience and I felt like I was dipped into the river of hip-hop and then I was reborn as a hip-hop composer.”

The classical-meets-hip-hop idea is not as rare as you might think. Black Violin is a duo from Florida featuring two classically trained string musicians Kevin Sylvester and Wilner Baptiste. They’ve been performing and recording for more than 10 years. And Miguel Atwood-Ferguson, a Los Angeles-based composer and musician, has made a career of transforming hip-hop compositions into classical pieces, most notably the work of Detroit rap artist J Dilla, who died in 2006.

For the group’s Sacramento concert, EMN will be backed by the 70-piece ARC Orchestra, a community group that includes both students and non-students. Steve Thompson, artistic director of the ARC Orchestra, will be the featured trombone soloist during EMN’s concert for trombone.

Rehearsals with the ARC musicians have been going well, said Kim, even though his compositions are not like the orchestra’s usual repertoire.

“There are varying levels of people of proficiency, and age and backgrounds and they really like classical music,” he said. “These are a lot of white people, older white people. And the public relations lady said, ‘Even the most stodgiest people loved it.’ So, that was the reaction.”

Kim says the fact that EMN can exist during a time many consider full of divisiveness, shows that people are trying to come together and move forward.