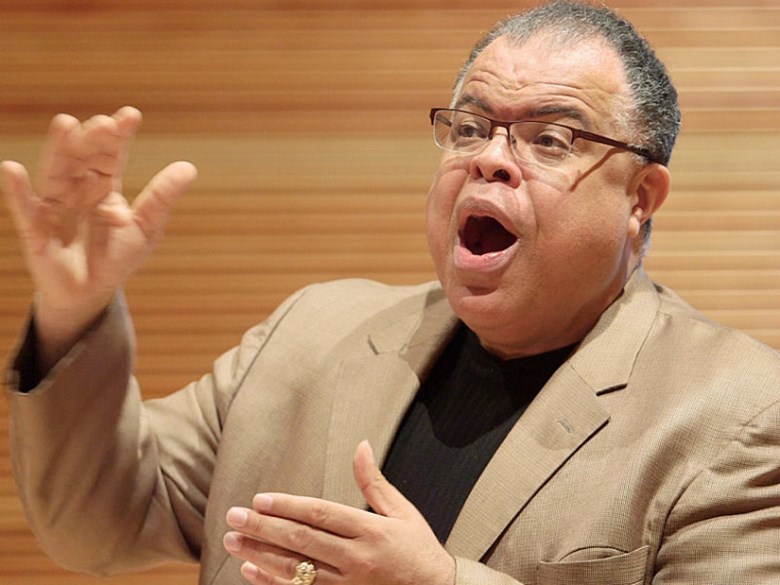 From the liberal arts haven of Northfield, Minnesota nearly 50 miles south of Minneapolis, the St. Olaf College Choir has become a household name in part because of their annual Christmas Festival which is broadcast on television and radio stations all over the country.

“For many years here at St. Olaf we had the earliest and the oldest listener-supported independent radio station in the country,” Armstrong says. “It transmitted this program regionally and through syndication. In 1983, there was a television production that year went national, and this program has become a staple at Christmas time.”

A choir is not deemed successful simply because they have an annual Christmas festival. Armstrong says that continuity in leadership certainly plays a role. There have only been four different conductors in 106 years.

He also mentions that while the caliber of his choir is high, he is often reminded of something he learned from the great choral conductor Robert Shaw.

“Mr. Shaw was often quoted as saying he wanted to nurture the amateur singer,” Armstrong says. “And he did not use it in a pejorative way. He demanded the most professional standards of those amateur singers, but he never wanted them to forget to be lovers of the art.

Armstrong goes on to tout the special kind of student that comes to St. Olaf every year. He says that of the 3,000 students that attend the college, nearly one-third of them perform in a music ensemble, and 600 are in one of the school’s choirs.

The college’s top vocal ensemble, the 75-person St. Olaf Choir tours domestically each year and internationally every four years. Armstrong says there are several reasons for this, but most importantly the tour represents the college’s mission to serve.

Tuesday night in Davis they’ll have a program that features music spanning from the Renaissance to the 21st century. The passion oratorio Pieta, composed by Seattle-based composer John Muehleisen, pays homage to more than one time period. In one movement. Muehleisen's 2012 piece employs melodic strains of a Bach motet to set the text of William Blake.

Armstrong calls Blake’s text “powerful,” elaborating that, “in a world when we can start to be so selfish and we lose our sense of empathy; the Blake poetry starts out, ‘Can I see another’s woe and not be in sorrow too? Can I see another’s grief and not seek for kind relief?’”

An alumnus of St. Olaf, Armstrong has conducted the college's premier choir for nearly 30 years. The only one who has had more time on the podium is the choir’s founder F. Melius Christiansen. Armstrong says he’d like to catch, as he put it, “the old man” and then retire somewhere warm.

Armstrong’s success comes from more than just being a good educator. He says he plays several roles in his student’s lives. But most of all, he says he’s “blessed with students who want to make a difference in the world.

The St. Olaf Choir performs Tuesday at the Mondavi Center in Davis at 7:30 p.m.