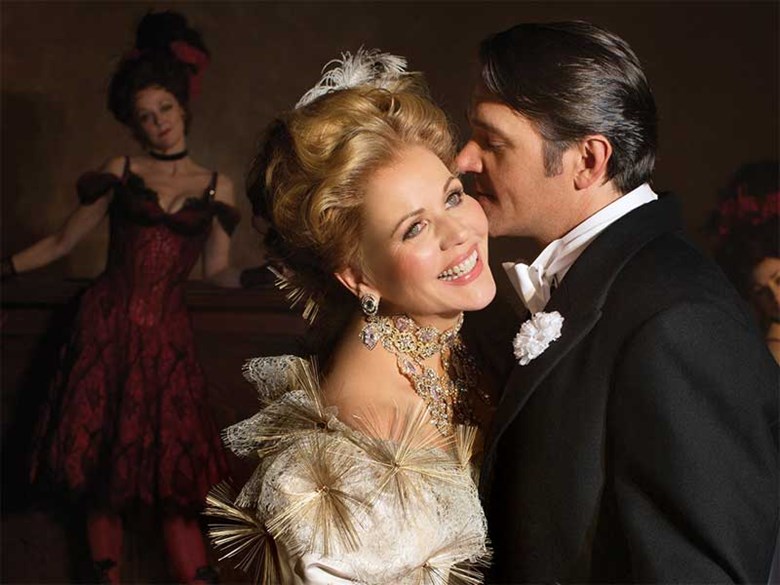 The Metropolitan Opera has found a brilliant way to expand its worldwide audience. Several times each season, The Met broadcasts its live Saturday matinees to hundreds of movie theaters around the world. That’s right, hundreds of theaters.

This year, there are 10 performances of The Met in high definition, many of which are repeated on weeknights. The advantages are numerous: You don’t have to fly to New York and spend a lot of money for Met tickets; the HD shows are very reasonably priced - around $20 - with discounts available. 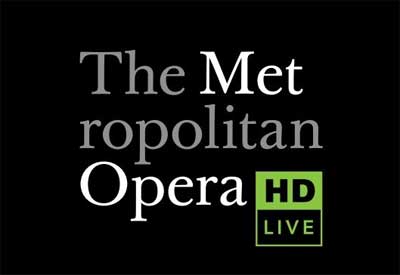 You don’t have to get dressed up; many people in the movie theaters are in jeans. You can munch on popcorn and no one will complain. And in the winter, you don’t have to brave the NYC snows to get to the performance. Onscreen subtitles help those of us who don’t speak Italian, French, Russian and German.

The HD shows offer two elements that are downright spectacular: Close-ups and backstage passes. When you sit at The Met in New York, you get one view of the stage, good or not, depending on how much you paid for your ticket. When you watch The Met in HD, you get a multi-camera show, with close-ups and various angles. Details of makeup and costumes add to the experience.

At a New York performance, an intermission would involve a beverage and a visit to the restroom. At The Met in HD, you get backstage interviews with the singers as they rush off the stage. You hear their perspectives on their characters. You watch the stage crews change the elaborate sets, and you see the organized chaos that occurs between acts.

In many ways, the Met in HD surpasses the New York experience. 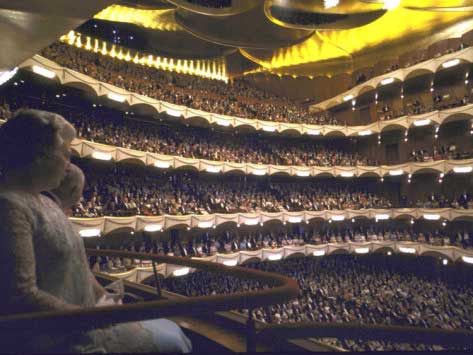 I am writing as an opera lover who doesn’t know anything about opera. Recordings of Caruso and Sills were commonly heard in my house when I was a kid. I never learned much about it, yet I faithfully go to every performance I can, and I thoroughly enjoy every minute.

This article is my gift to anyone who might be curious about opera.

There is no shame in admitting you recall this opera as “Rabbit of Seville.” The classic 1950 cartoon by Chuck Jones features Bugs Bunny as the barber, with a lot of shaving cream and a salad on Elmer Fudd’s head. You know the one. In a little over seven minutes, you get a few highlights of Rossini’s music and a lot of laughs.

The barber is named Figaro, and he is the center of a trilogy of plays by Pierre Beaumarchais. Mozart picked up on the theme and wrote The Marriage of Figaro, which could win the prize for Most Air-Conductable Overture. Gioachino Rossini’s Barber of Seville premiered in 1816. It is an opera about Spain, sung in Italian, that was first performed in England.

The Met has a Seville fetish this season. Bizet’s Carmen and Mozart’s Le Nozze di Figaro, both of which take place in the Spanish city, were staged earlier this fall.

Why Seville? The city had a long history as a trading post before it grew to be the largest economic center in Europe. Over the course of centuries, it was ruled by Romans, Muslims (Moors) and Castilians. Seville has had times of war, prosperity and plague. During the Inquisition, thousands of the city’s Jews were converted or expelled.

Except for the plague, all of that came before Christopher Columbus set out to sail the ocean blue. Seville is the capitol of Andalusia, one of Spain’s autonomous communities. It also has the distinction of having the hottest temperatures in Europe’s recorded meteorological history.

Now, about the Met Opera leads:

Isabel Leonard has the kind of talent and flexibility that allows her to charm us as the hot and impetuous Rosina after, just a few weeks ago, she made us laugh when she played the lusty teenage boy named Cherubino in Nozze. The mid-November release of Dr. Seuss’s Gertrude McFuzz features her voice in the title role.

They say the tenor always gets the girl. The tenor, in this case, is played by Lawrence Brownlee. And about that barber … His name is Figaro, and he is played by Christopher Maltman. HD viewers got a sneak peek a few weeks ago of this performance in its rehearsal stages. Maltman and Leonard will give us some good comic acting along with their stellar vocals.

Barber is a pretty fast-moving opera, and it is a comedy, so if you are in search of an introduction to the genre for yourself or someone you know, you can count on Il Barbiere di Siviglia.

When you say, “Wagner,” I say, “Ick.” Or at least, I used to. Wagnerian operas are known for being long and intense. When I saw one performed by The Met’s touring company, I got a little sleepy, but when I see a big production number in HD, the spectacle overrides the darkness. Besides, for every person like me who doesn’t swoon over Wagner, there are many who will ride with the Valkyries to hear his compositions.

Wagner’s Die Meistersinger von Nurnberg is a comedy set in the mid-1500s. It does not involve any Valkyries, but it does include a group of musicians who work together for the sake of their community. This is not a typical choir. These folks follow a set of rules for writing and performing, and they compete against Master Singers from other cities. It’s an opera about musicians singing about music. And it’s a long one – the four and a half hours includes a couple of intermissions.

James Levine, music director for The Met, took some time off a few years ago for health reasons, and he now conducts from a wheelchair. But his enthusiasm from the podium is a rich as ever. Levine loves Wagner, and this is one of his signature conducting roles.

The key performances are by Michael Volle, Johan Botha and Annette Dasch.

By the way, don’t tell anyone I trashed Wagner. His fans are among the most ardent lovers of opera.

The New Year brings a new production to the Met stage and to the HD audience. Franz Lehar’s The Merry Widow is a story of matchmaking, and attempts were as comic in the 1860s as they are now.

Don’t be concerned if you don’t know the difference between an operetta (like this one), light opera or opera comique. Any of them will make you laugh, even if a few sad events make their way into the storyline. With laughter comes comic acting and, often, a very physical form of humor.

Did you see Renee Fleming perform the National Anthem before the last Super Bowl? She is a flawless soprano. Graceful and beautiful, too. She can still play characters younger than her actual age. As masterful as Fleming is as a vocalist, she does not offer as much as an actress.  That’s just my opinion. Go to see the show so you can decide for yourself.

Other performers include Nathan Gunn and Kelli O’Hara.

A preview of The Merry Widow confirms this production as an excellent combination of staging, costumes and music.

E.T.A. Hoffmann. Do you know the name? He wrote the stories of The Nutcracker and Coppelia. And some of his other stories were the inspiration for Jacques Offenbach’s opera, The Tales of Hoffmann.

This opera features three short stories, each with its own heroine. One is an automated woman, one a long-lost love and the third is a courtesan. Offenbach takes license by making Hoffmann a major (and tragic) character who falls in love with all three women. Silly man.

You may recognize the Barcarolle from this opera (sorry, the famous cancan is from another Offenbach composition).

Tenor Vittorio Grigolo stars as Hoffmann. Baritone Thomas Hampson is so mean he can play the Four Villains.

This is a double-header. We get two operas that are short in duration, yet long on talent. To highlight The Met’s gift for taking operas out of their original settings, these shows have a 1940s film noir adaptation.

Anna Netrebko is one of the young sweethearts of The Met (along with Anita Rachvelishvili, who was brilliant in this season’s Carmen). She performs the role of the blind princess who is held, almost captive, in a secluded garden. She experiences love for the first time with a stranger to the region.

Now you know why the film noir treatment is appropriate.

Mezzo-soprano Joyce DiDonato sang the National Anthem at the last game of the World Series in her hometown of Kansas City. It didn’t help. Her team lost. Ours won. But that was baseball, and this is opera. This is DiDonato’s world, and she wins every time.

How can I describe the bel canto style of singing? It’s a vocal version of Mozart’s “too many notes.” Instead of a straightforward melody, the singing takes a lilting course, hitting a wide range of notes. Whether or not you like the style, it’s hard to deny the talent involved.

Iconic fairy tales involve a handsome prince who falls in love with a common maiden. Back in the 1500s, King James of Scotland another royals would travel through their kingdoms in disguise. That custom led to a poem by Sir Walter Scott, and Scott’s poem led to this opera by Gioachino Rossini. In all, Scott’s poetry inspired quite a few operas.

DiDonato plays the lead in The Lady of the Lake, and Juan Diego Florez is the king who relentlessly pursues her. A nice problem to have.

This is another double bill, and these two short operas are typically paired together and referred to as “CavPag.”

Cav is a tale of love, affairs, seduction, brotherhood and a fight to the death. Throw in a train and a pickup truck, and we’d have a country song. Mascagni got hold of it before Vince Gill, so we have an opera instead.

We get our share of trucks in Pag, which is set at a 1948 truck stop. This is the opera I was introduced to as a child, but I assure you it is not a child’s story. Love goes wrong, even in the world of clowns. Members of a performing troupe play out their passions and jealousies on the stage, and it does not end well.

Tenor Marcelo Alvarez does double duty, playing the lead in both operas.

(The Met’s season is well underway. Audiences have already enjoyed Verdi’s Macbeth, Mozart’s Le Nozze di Figaro and Bizet’s Carmen. All three are well worth seeing if they are shown as “summer reruns” in 2015.)