November is a great time to visit Chile and Argentina. It’s early spring, the jacarandas are in full bloom, and the weather is quite agreeable. It was a pleasure to travel with 40 jazz enthusiasts on another trip with CapRadio Travels. On our 14-day tour, organized by Earthbound Expeditions, we visited several of the region’s premier wineries, took a tango lesson and heard some great live music!

On our very first night, we were treated to a great jazz trio led by bassist Hugo Rojas. Guitarist Sebastian Prado stood out, playing some very clean lines, reworking some great American standards. Juan Pablo Jaramillo, who studied under Terri Lynne Carrington at the Berklee College of Music, provided a solid foundation. Everyone in our group agreed we were off to an auspicious beginning! 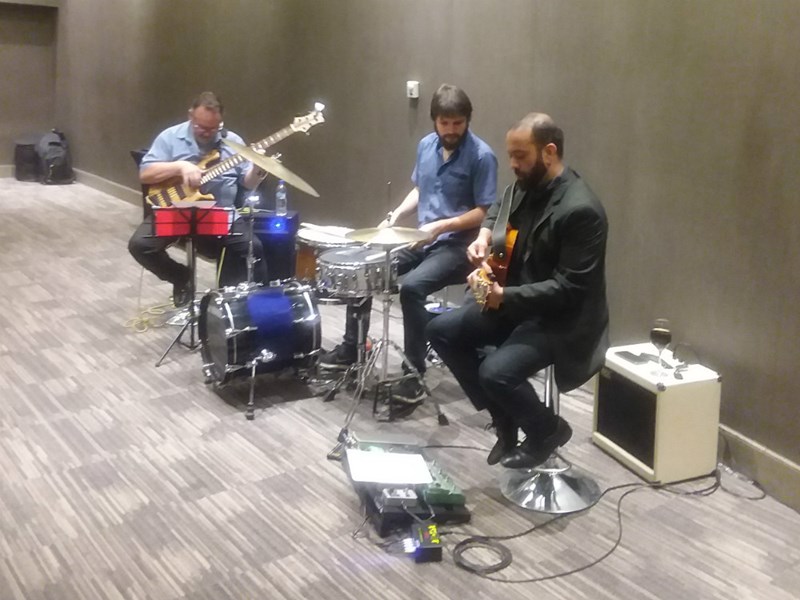 The following evening, we enjoyed a dinner and private concert at The Jazz Corner, one of three active jazz clubs in Santiago. Seven million people make up this modern city, and they all seemed to be on the road as we crossed town into the Brazilian barrio.

A quartet led by pianist Edguardo Parraguez Waltemath breathed new life into jazz standards including "Body and Soul," "Nardis" and "There Will Never Be Another You." A Latin arrangement of Juan Tizol's "Caravan" featured an 18-year-old bassist named Nahuel Blanco. This young man plays with vibrant energy and the feeling of a much older soul.

Freddie Hubbard's "Red Clay" was reworked as a groove tune, proving Waltemath can mix straight ahead jazz with elements of soul and funk. He's been the resident pianist at The Jazz Corner for four years and accompanied Wynton Marsalis during a 2017 visit. 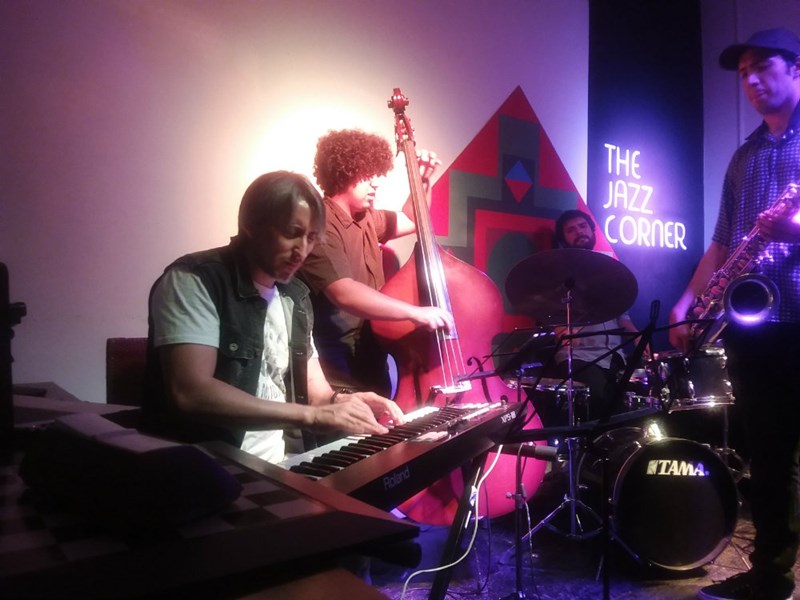 A quartet led by pianist Edguardo Parraguez Waltemathat performs a private concert for the CapRadio Travels groups at The Jazz Corner, one of three active jazz clubs in Santiago.

It was encouraging to see these great young musicians (no one in the band yet 40) rework standards in such an original manner, playing a few at break-neck tempos! From what I heard tonight, live jazz is alive and well in Santiago, Chile!

The following day we explored Chile's Maipo Valley, a region famous for its vineyards. Our first stop was at Undurraga Vineyards, famous for their outstanding sauvignon blanc. We then dined at Santa Rita Winery. When we stepped in the dining room, there was a romantic aura of old-world charm. The Spanish Colonial architecture set the mood for a feast complimented by their premium Carmenere. 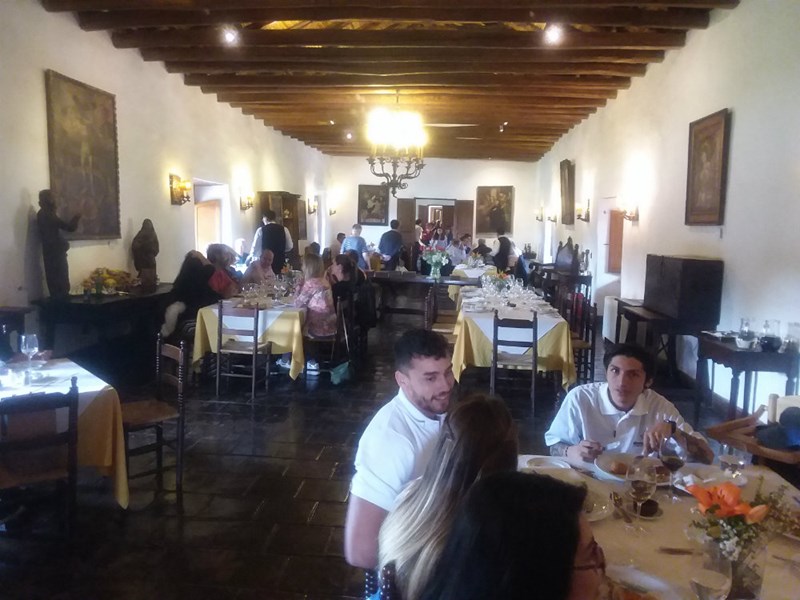 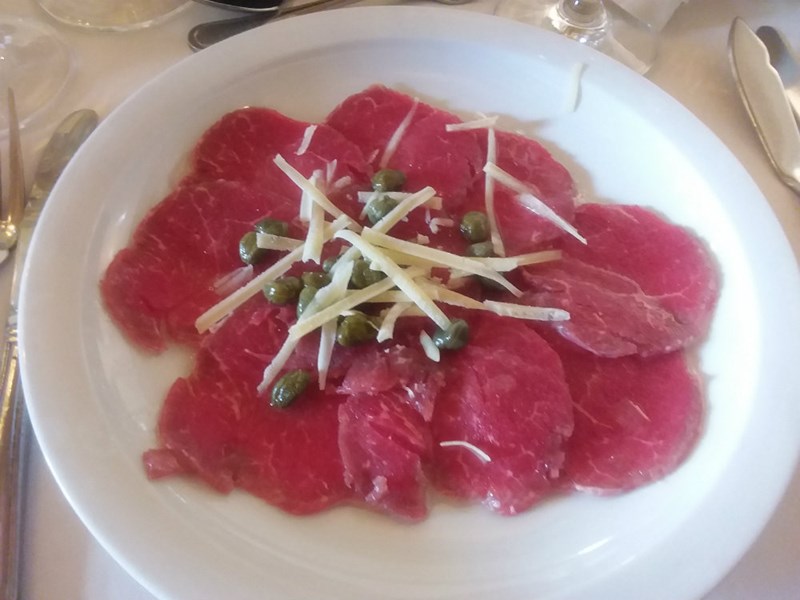 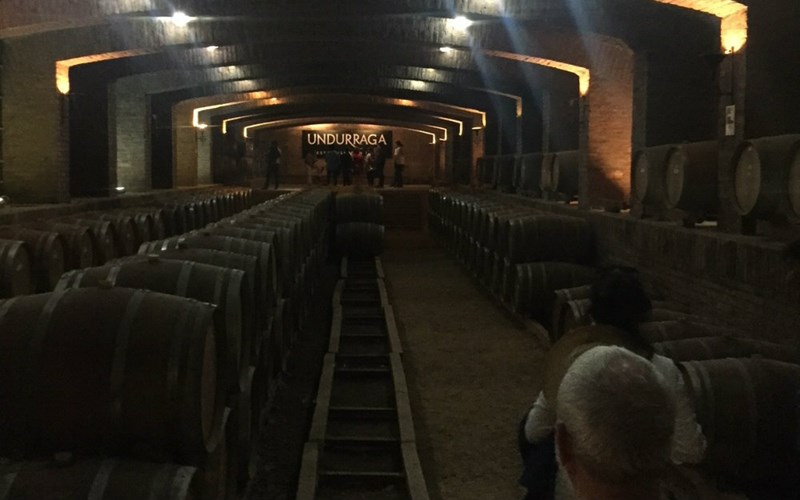 Undurrago Winery was established in 1885. 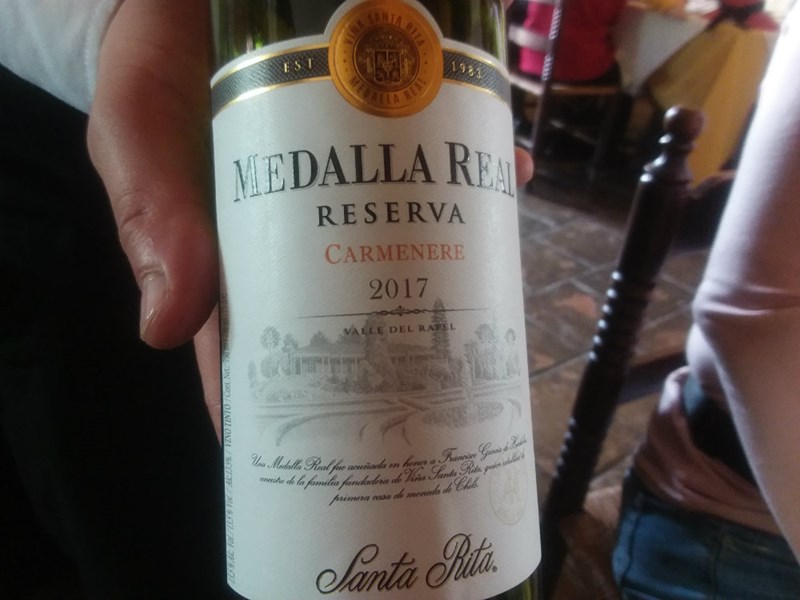 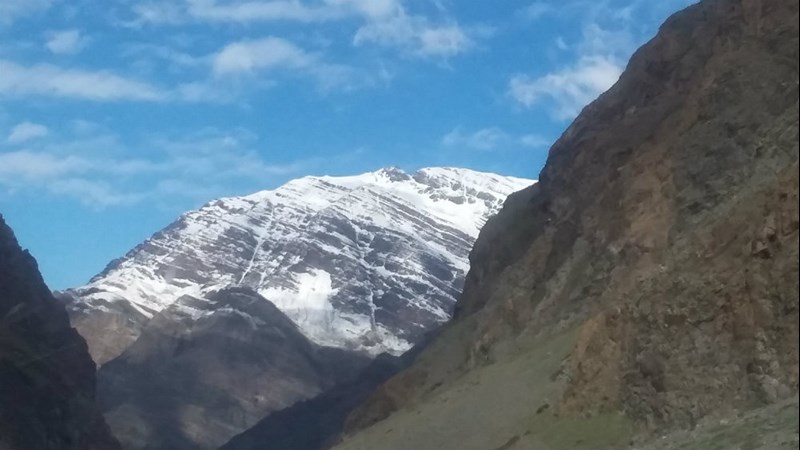 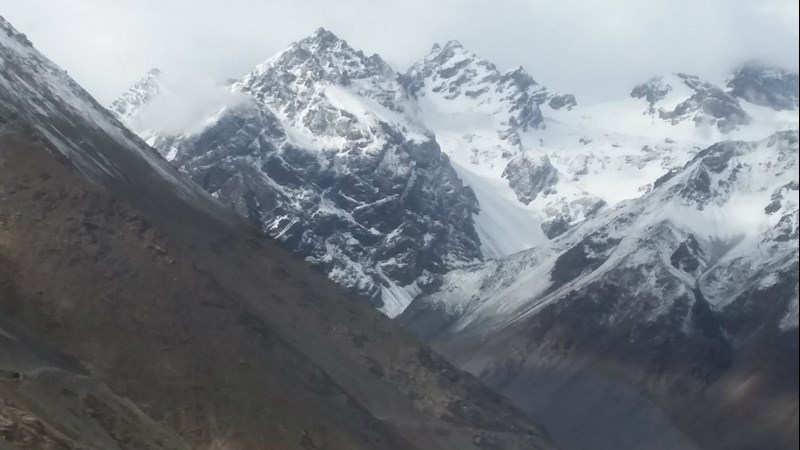 After crossing the Andes by bus, we were ready for a musical change of pace.

Thus far on our journey, the wine has been top drawer and the jazz has been straight-ahead mainstream. On our first night in Argentina’s Mendoza wine country, the musical selection took a pleasing twist.

The Diamond Jazz Band is a quintet that plays in the swing tradition. They worked their way through several crowd-pleasing tunes, including "Cheek to Cheek" and "Big Spender." All members of this quintet also belong to the 30-piece Sparkling Big Band. This smaller ensemble is most noted for the dramatic flair and dynamic range of vocalist Lorena Miranda. One of Argentina's leading jazz vocalists, Lorena, brought everyone at Bistro Anna to their feet with a heartwarming rendition of "Magdalena." 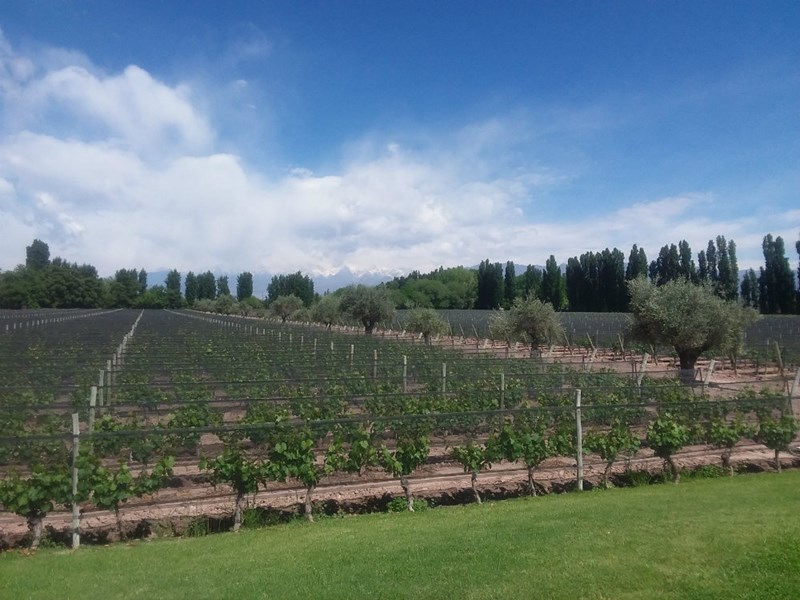 At the Casarena Winery in Mendoza, Argentina, nets are used on the vines to protect them from seasonal hail (sometimes baseball size). 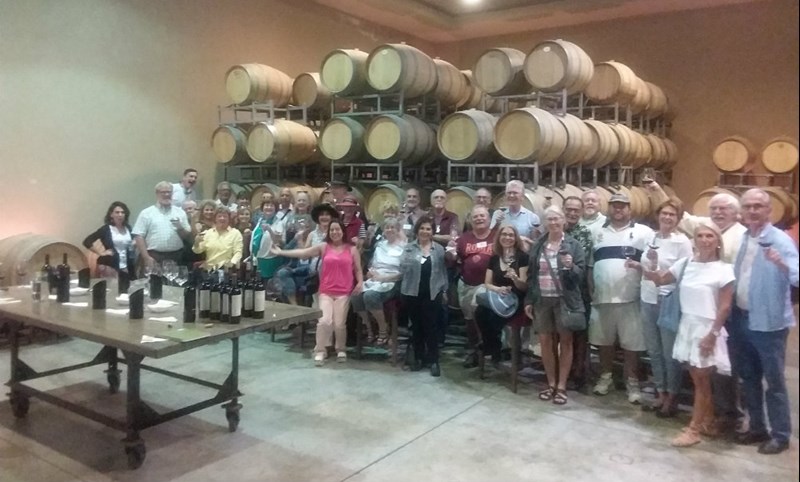 Argentina's wine-growing region has a much dryer climate than Chile's Maipo Valley. Drip irrigation is widely used. Much garlic is also grown, but exported to Italy and China, as not much garlic is favored in Argentine cuisine. The olive oil industry is also important and was introduced by the Spanish. 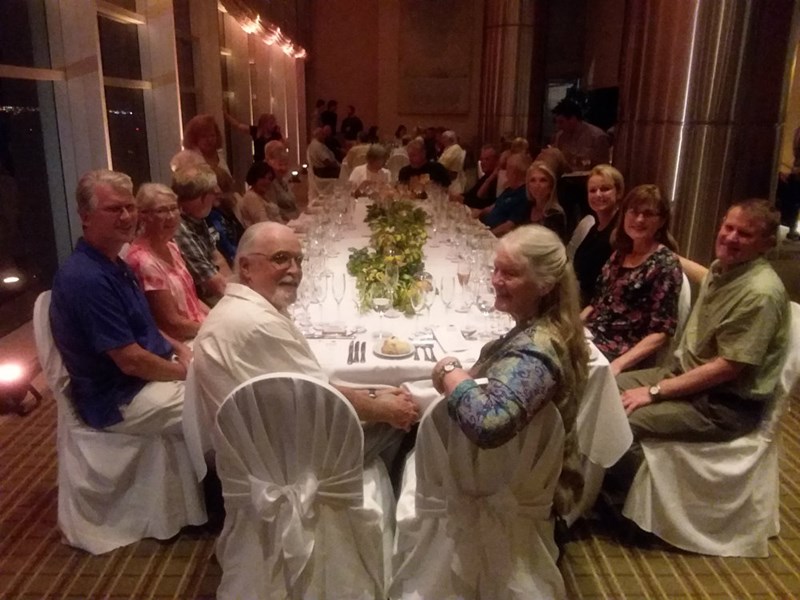 The CapRadio Travelers enjoying a sparkling wine tasting and dinner at the Sheraton Mendoza Hotel.

Vineyards are typically much larger than those in California, some up to 5,000 or 10,000 acres. Although famous for their malbecs, we also enjoyed some great sparkling wines of French influence (not for export) as well as dry sauvignon blancs. 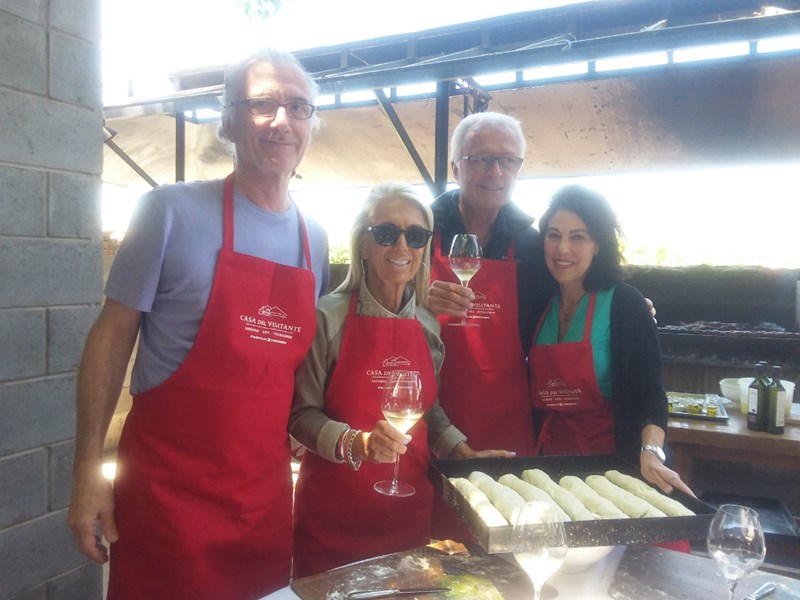 We were treated to a cooking class at the Zuccardi family's Bodega Santa Julia. We made our own empanadas and bread from scratch, then dined on a multi-course late lunch.

Our final private concert was held at Borges Jazz Club in the Palermo district of Buenos Aires. Bassist Pablo Motta and his countrymen navigated through two lengthy sets of tangos, chacareras, sambas and a lyrical waltz. Pianist Abel Rogantini infused jazz sensitivities and riffs into many of the arrangements. An impressive reading of Astor Piazzolla's "Oblivion" featured a great young bandoneon expert. 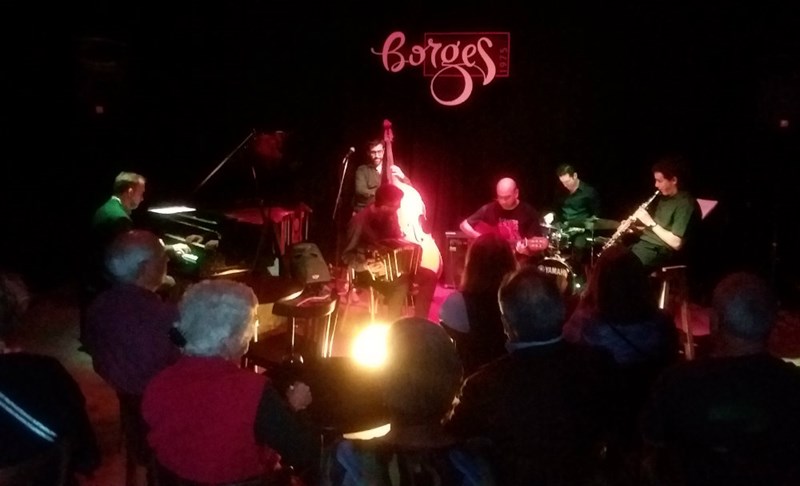 Bassist Pablo Motta and his group perform at the Borges Jazz Club in the Palermo district of Buenos Aires.

Born and raised in Argentina, Motta moved to Southern California at age 12. He began performing with his father's band at age 15. This led to work with many of L.A.'s top jazz musicians, including Justo Almario, John Pisano, Donald Vega and Ronald Muldrow.

Simultaneously with his jazz interests, Motta began exploring all aspects of tango and Argentine folkloric music. He went on to tour with the Broadway hit show "Forever Tango." Since returning to Buenos Aires in 2008, Motta has performed with leading American improvisors at the Buenos Aires Jazz Festival. He also coordinates tango jam sessions.

Motta speaks perfect English. Quite the musicologist, he engaged our audience with illuminating information about each song presented. He also spoke about the interesting history of the bandoneon. 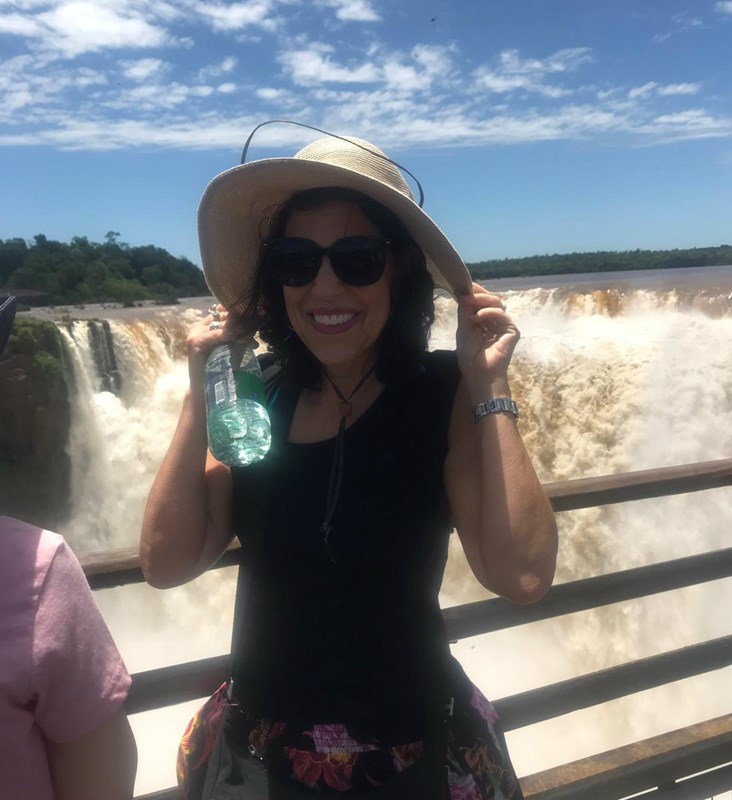 A few days later, 21 of our travelers joined us on a tour of the Iguazu Falls, one of the seven wonders of the world! Although we were surrounded by mother nature, the live jazz of Chile and Argentina continued to ring in my ears!