Hundreds of voices took up that chant Monday at picket lines on the UC Davis campus, marking the start of an indefinite work stoppage — carried out by postdoctoral students, student and career researchers and graduate teaching assistants, readers and tutors — across University of California schools.

Positioned at two crucial intersections through which red Unitrans buses ferry students into the heart of the school, striking workers carried navy-and-white signs declaring “UAW on strike,” their voices raised in protest.

“I hope that UC notices that with the strike, the labs are empty, the classrooms are empty,” said UAW 2865 bargaining team member Aarthi Sekar. “I want people to realize that the type of research we do for UC — UC is not actually compensating us fairly for what we do for them.” 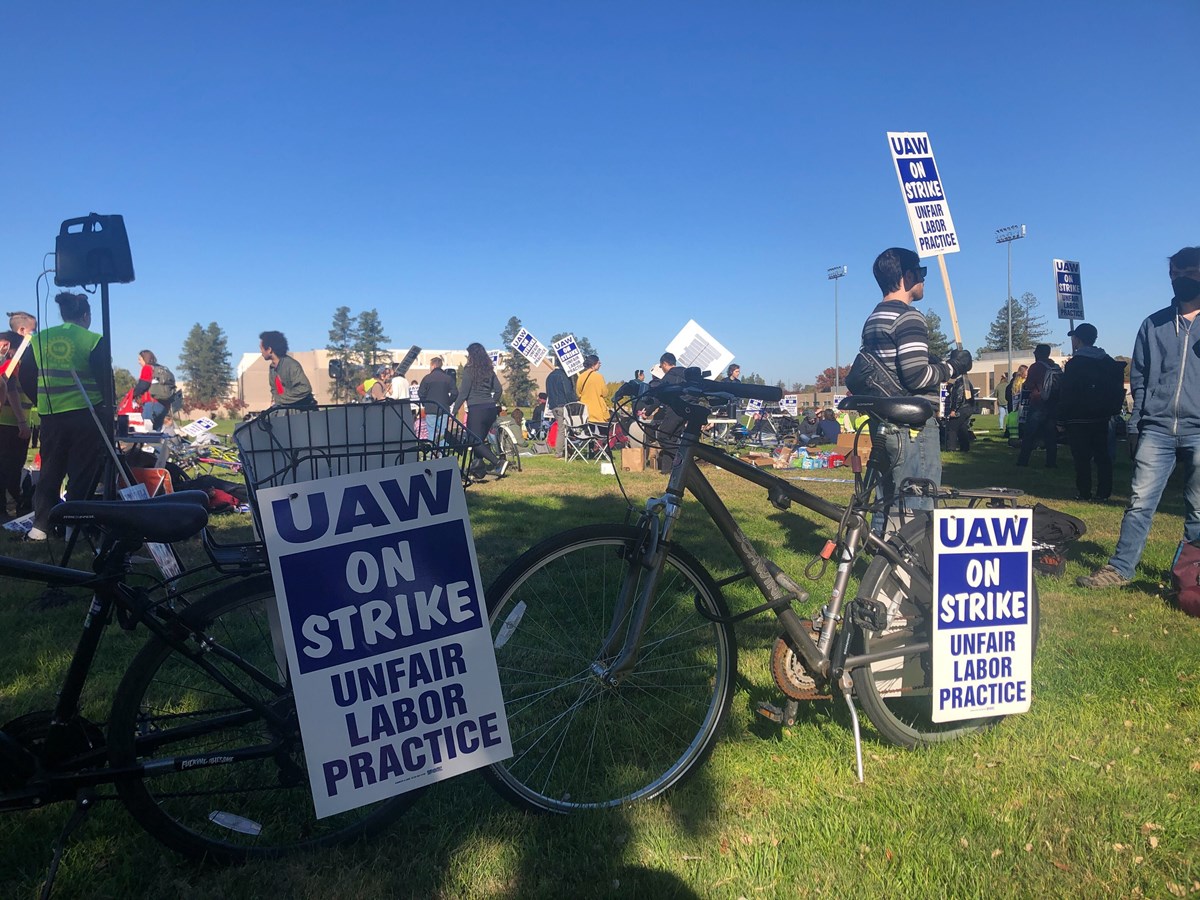 A couple of strike signs propped up on bikes.Janelle Salanga / CapRadio

Sekar is a 7th-year genetics PhD student at UC Davis, and she’s one of the almost 48,000 academic workers, represented by four different bargaining units under three unions, who are striking for fair compensation, disability justice, equity for international students, more support for student parents and greater transit access. Organizers are calling it “the largest strike in United States higher education history.”

The three unions, UAW 2865, SRU-UAW and UAW 5810, had a strike authorization vote between Oct. 26 and Nov. 2, in which 98% of voting members were in favor of calling a strike. Had UC met union demands before Nov. 14, the strike would have been called off.

“Negotiations with the union are continuing in an effort to avoid a work stoppage, and we are hopeful about an agreement,” John Marx, interim vice provost and dean of undergraduate education at UC Davis wrote to students on Nov. 10. 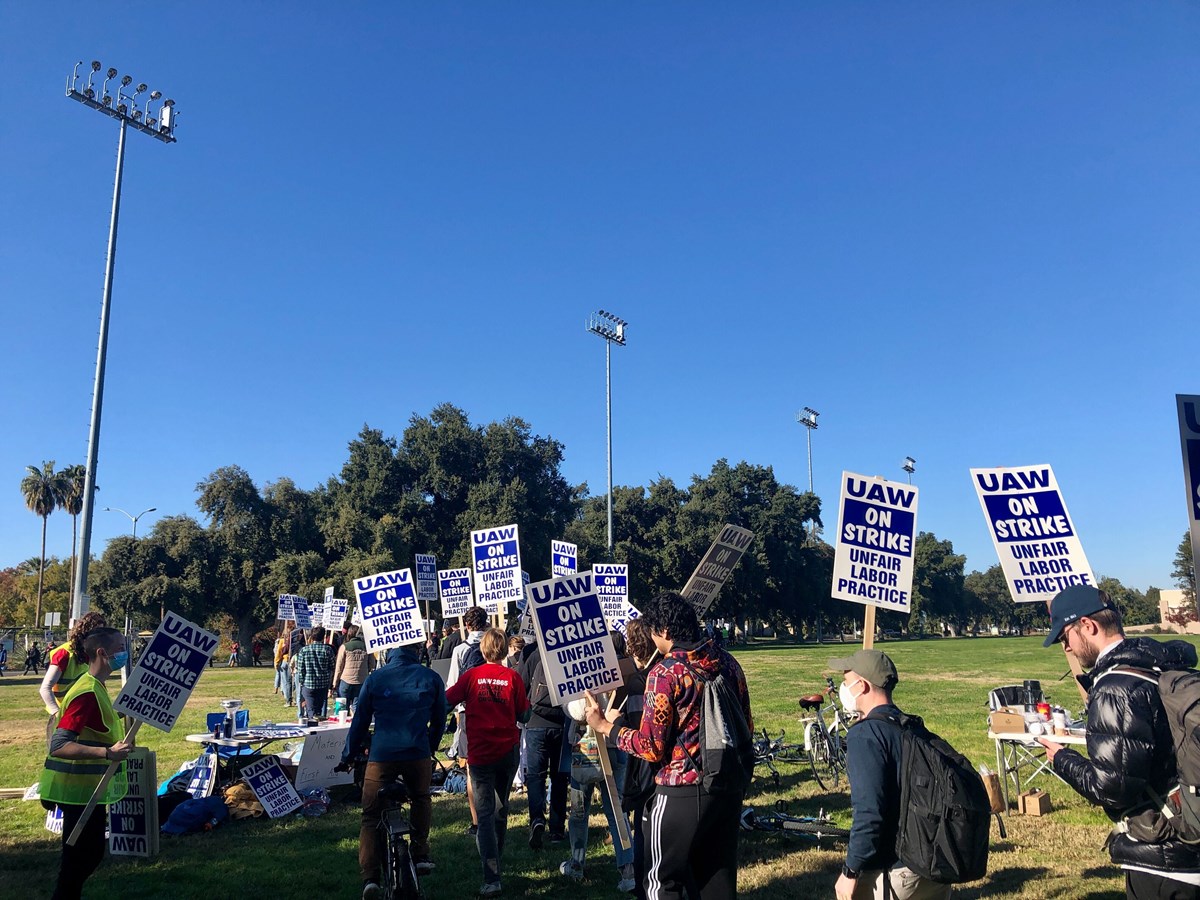 After a lunch break, striking workers grab their signs on their way to once again set up the picket line at Hutchison Drive and La Rue Road.Janelle Salanga / CapRadio

UAW has filed over 20 Unfair Labor Practice charges against UC, including failure to respond to requests for basic information.

In a statement to ABC10 Monday, the UC Office of the President said that “the University has provided fair responses to UAW on priority issues of concern to all four bargaining units, including in areas of fair pay, a respectful work environment, and housing.

The work stoppage has put some sections of classes at UC Davis on hold, graduate teaching assistants at the picket line said.

Researchers, graduate students asking for not just fair wages, but respect for their labor

The unions have seven core demands: fair compensation, climate and transit, support for working parents, disability justice, protection for international scholars, anti-bullying protections and job security. While some demands have been met in contract negotiations for some unions, the demands have not been met for all groups.

Each union has already reached a deal with UC on protections against bullying and retaliation, including clear timelines for investigating abusive conduct, a codified definition of abusive conduct and the ability for workers to continue their work at a different environment while their current one is being investigated.

“We deserve respect in the workplace, just like everybody else — we want to be seen as professionals by the university,” said Colby Brown, at the Hutchison and La Rue picket line. He’s a third-year math PhD student at UC Davis.

Many of the striking workers, like Brown, do much of the student-facing work in the university on top of their own research, like grading papers and exams, teaching students and organizing lessons for professors.

Brown is the Student Disability Center (SDC) teaching assistant for the math department, which means he’s in charge of assisting the department with organizing exams for students with accommodations.

“The department needs our help to arrange all of those [accommodations], to find the space, to find the time,” he said. “If we aren’t there, then the professors and the faculty and the staff at the department are going to have a hard time — it’s a fairly technical job trying to do all of that organization.”

Erika Dvorak, a third-year sociology PhD student, is also a teaching assistant. Unlike Brown, she TAs remotely, an accommodation granted by the university, but only after she provided documentation six different times, she said.

“It was dehumanizing, it was exhausting and it took time away from my research and from my students,” Dvorak said. “I was focused so much on trying to get my access needs met that it was hard to do the things that I’m actually in graduate school to do, just like everybody else here.”

She said she’s most excited about the access needs article being proposed in union contracts, which, as written, would no longer require students to provide documentation to receive accommodations from the university.

“I have a lot of privilege, that I was able to cater to the university’s unreasonable demands,” she said. “I have a doctor who was willing to keep jumping through these hoops for me, and I also have financial support from family to be able to pay all of those co-pays … and a lot of disabled students do not have those resources.”

Adam Moore is a third-year PhD student in UC Davis’s integrative pathobiology program who’s participating in the strike remotely. He said the access needs article was developed by UAW 2865’s Disability Justice Committee with influence from UC Access Now, which in 2021 laid out a set of demands for the UC to reimagine campuses with universal access and begin dismantling ableism. The founder of UC Access Now, Megan Lynch, is a UC Davis grad student.

Moore said the committee, made up of rank-and-file union members, is also working to insert COVID-19 protections, like improved ventilation and universal access to PCR testing, into the contract. The committee has created an open letter with over 150 signatures from union members across the UC demanding that union leadership add those protections to bargaining.

Solidarity across the UC

While not everyone is in solidarity with the striking workers — Brown noted that some professors didn’t realize there was a strike, while other graduate students are continuing to work — there is still support across different organizations and departments.

“The students so far have been very supportive, and they’ve also been helping get me some information about professors moving exams that the professors haven’t been sending me,” he said. “We really all look forward to getting back to work, to working with students again, because we wouldn’t be here in this job if we didn’t love working with them.”

At a midday rally at Mrak Hall, where UC Davis Chancellor Gary May’s office is located, speakers from Teamsters Local 2010, which represents UC’s skilled trades workers, and California Nurses Association were among those to speak in solidarity. 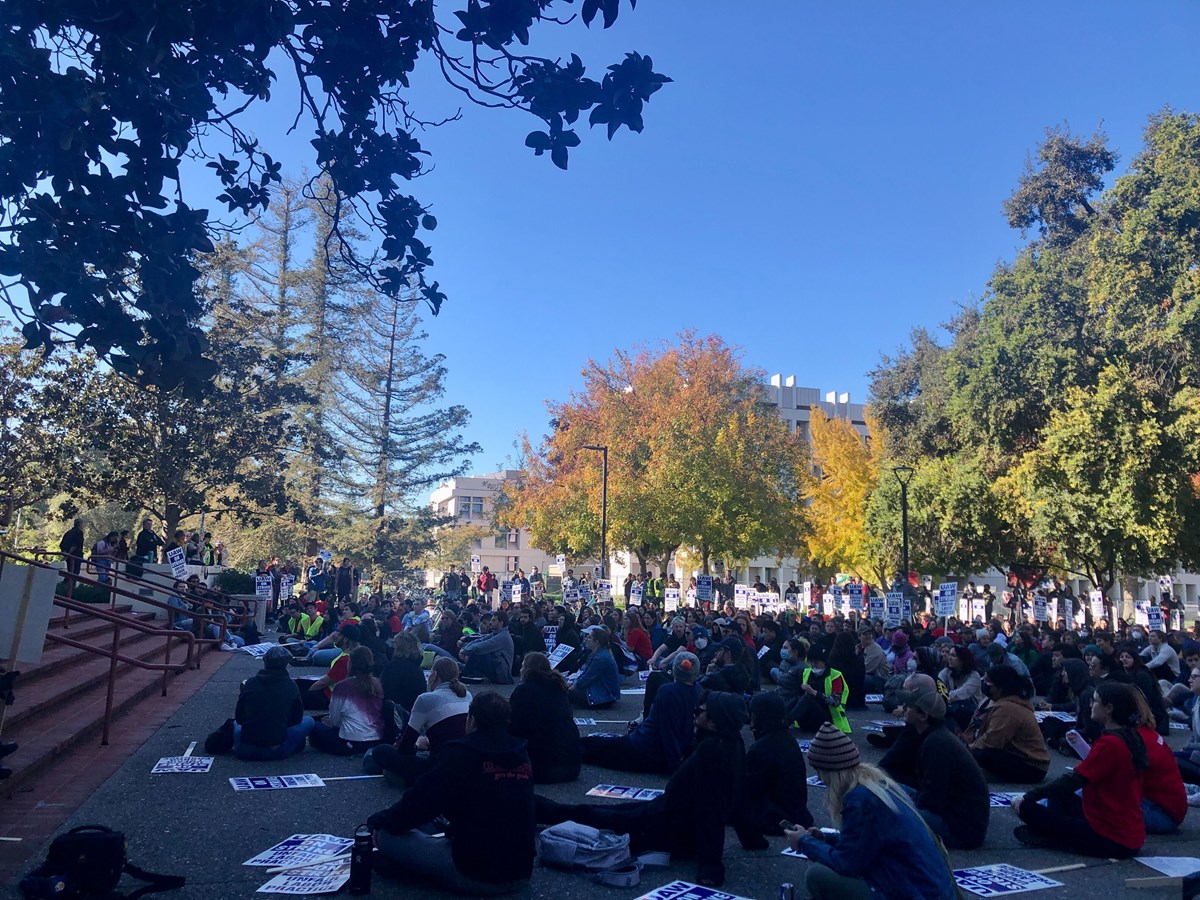 “We believe in fair wages — we all got families, we all got people to go home to,” said speaker Gabriel Waterman with Teamsters. “We’re here in solidarity with you guys and we support everything you guys are going through.”

Several departments across the ten UC campuses have submitted letters of support for the striking workers, including the Council of UC Faculty Associations, which has an open letter for faculty to sign on in support.

“Our students, researchers and workers cannot often afford to live near where they work and attend classes,” the letter reads. “Our university is responsible for providing not only rigorous training but by the means by which all who enroll — including the most economically vulnerable — can live and study productively.”

Striking workers say that the work stoppage isn’t just about taking a stand for greater protections and respect, but about changing the way UC — and higher education — cares for the people who provide the labor to keep it running.

“There’s this culture in academia that you have to suffer in order to be successful,” Moore, the integrative pathobiology student, said. “We are here and taking a stand in saying that’s not necessary. We can still do fantastic work — we can do even better work — when we are fairly compensated and supported.”

Bargaining teams from UAW 2865, SRU-UAW and UAW 5810 will continue to meet with representatives from UC throughout the rest of the week in attempts to secure contracts that meet their demands.

This story has been updated to clarify that career researchers are also part of the striking workers.