Western wildfires burning in 2018, like the River Fire in Lakeport, Calif., sent plumes of smoke to the Central U.S. where it helped seed more destructive thunderstorms.

In late July of 2018, massive wildfires blazed across Northern California. At the same time in Colorado, weather alerts went out warning of heavy thunderstorms and baseball-sized hail.

The two disasters were separated by a thousand miles, but scientists are now finding they're connected.

The massive clouds of smoke and heat that rise out of Western wildfires are having far-reaching effects across the country, even beyond hazy skies. That summer, the smoke blew to the Central U.S., where it ran headlong into summertime thunderstorms that were already forming.

The collision made those storms even more extreme, boosting the rainfall and hail by more than 30 percent, according to a new study in the Proceedings of the National Academy of Sciences.

"It's surprising to many people, probably," says Jiwen Fan, Laboratory Fellow at the Department of Energy's Pacific Northwest National Laboratory and an author of the study. "I really wanted to look at if there's any connections between them."

Understanding the effects of wildfires on weather patterns far downstream could help improve forecasts in those areas. In the Central U.S., extreme summer storms can pose a dangerous threat, often doing millions of dollars in damage.

"Scientists are showing that things are really connected to each other," says Danielle Touma, a postdoctoral researcher at the National Center for Atmospheric Research, who was not involved in the study. "And we can't just think about where we live, but we have to think about what's happening in other parts of the world."

While it may seem like raindrops simply pour out of clouds, those drops won't form without a seed to get them started. Raindrops need microscopic particles, known as aerosols, which can be dust, soot, or even microbes, floating in the air.

"Lots of people do not realize, before rain, you have to have the tiny particles," Fan says. "They're tiny particles you cannot see with the bare eye." 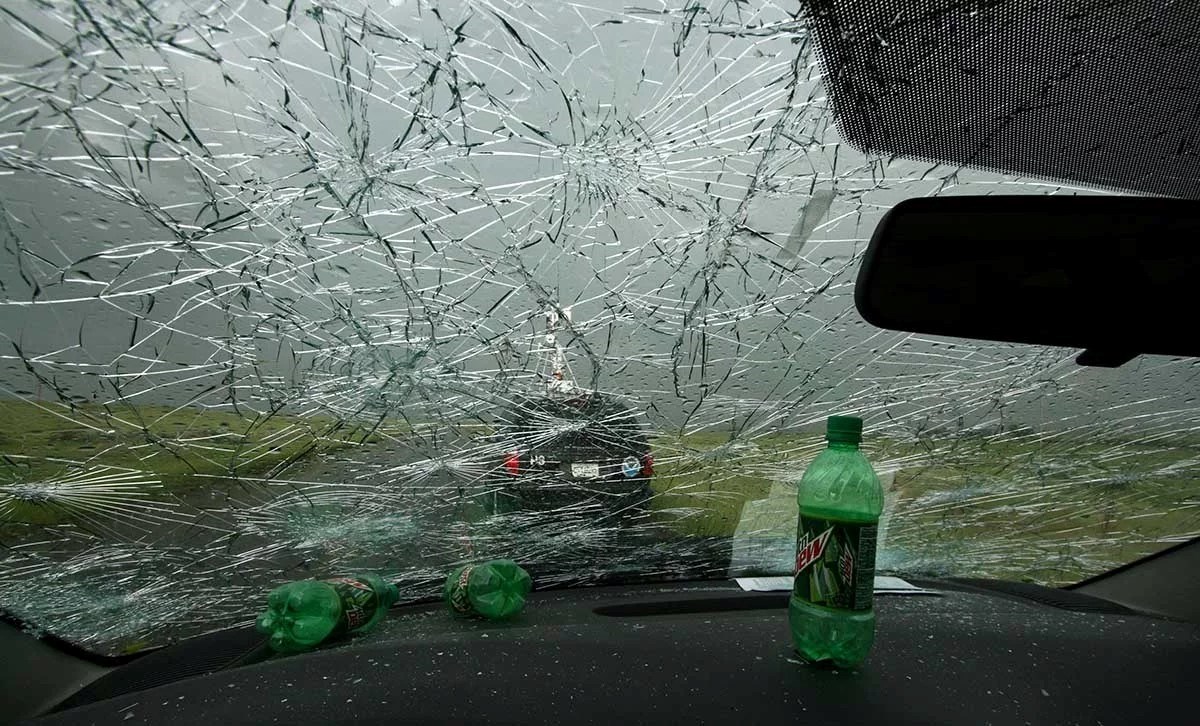 Hail from Central U.S. summer thunderstorms can pose a serious danger and cause millions of dollars in damage.Sean Waugh/NOAA/NSSL, VORTEX II

The particles give water something to condense onto, eventually getting heavy enough to fall to the ground. In 2018, as the Carr Fire and Mendocino Complex burned in California, massive amounts of particles floated east across the Rockies, where they collided with large thunderstorms.

More particles created the conditions for more raindrops, as well as hail, which occurs when powerful storms lift particles high into the cloud and water freezes on them. Running complex computer models, Fan and colleagues found that the Western wildfires boosted heavy rainfall in the storms by 34 percent and large hail by 38 percent.

The heat released from wildfires also played a major role, since it can strengthen the winds that blow to the Central U.S.. Those winds picked up extra moisture on the way, providing more fuel for the thunderstorms and strengthening the intense dynamics inside the storms themselves. In the July 2018 storms, the winds in Colorado topped 100 miles per hour.

"These kinds of things can cause hail damage or flooding, depending on where the precipitation is falling," Sonia M. Kreidenweis, professor of atmospheric science at Colorado State University. "If the Central U.S. wasn't already set up to have a storm, it might not have the same kind of impact."

Historically, the West's fall fire season didn't overlap much with the summer thunderstorm season in Central U.S. states. But with climate change creating drier, hotter conditions for wildfires, that overlap could become more common, since destructive wildfires are happening earlier in the year.

Understanding this long-range influence of wildfires could help improve weather forecasts, giving communities in the Central U.S. more accurate warnings when destructive hail and rain are on the way.

"If they know that California or Oregon are having an above average wildfire season, they might want to be on the lookout for more severe storms coming their way," Touma says.