All along a dirt road that snakes through Blodgett Forest are countless blackened trees. It’s the charred aftermath of September’s Mosquito Fire, which burned tens of thousands of acres throughout the El Dorado and Tahoe national forests.

When the fire began edging into Blodgett Forest, which lies just west of Lake Tahoe, area researchers wondered what might happen. Blodgett, which is managed by Berkeley Forests, has long been a place where researchers can study different methods of managing land, in part to see how best to combat wildfire risks. One example is prescribed fire, which researchers started testing out at Blodgett almost two decades ago.

Ariel Roughton, research forest manager at Blodgett, said she knew it was inevitable: one day, the forest would likely face severe fire like so much of California already has in recent years.

“We hoped that we were as ready as we could be,” she said. “I think that we saw that in some areas we were, but there's a lot more that we could have done, and that's going to help inform our decisions going forward.”

In the fire’s aftermath, researchers said they’ve come across some surprises. 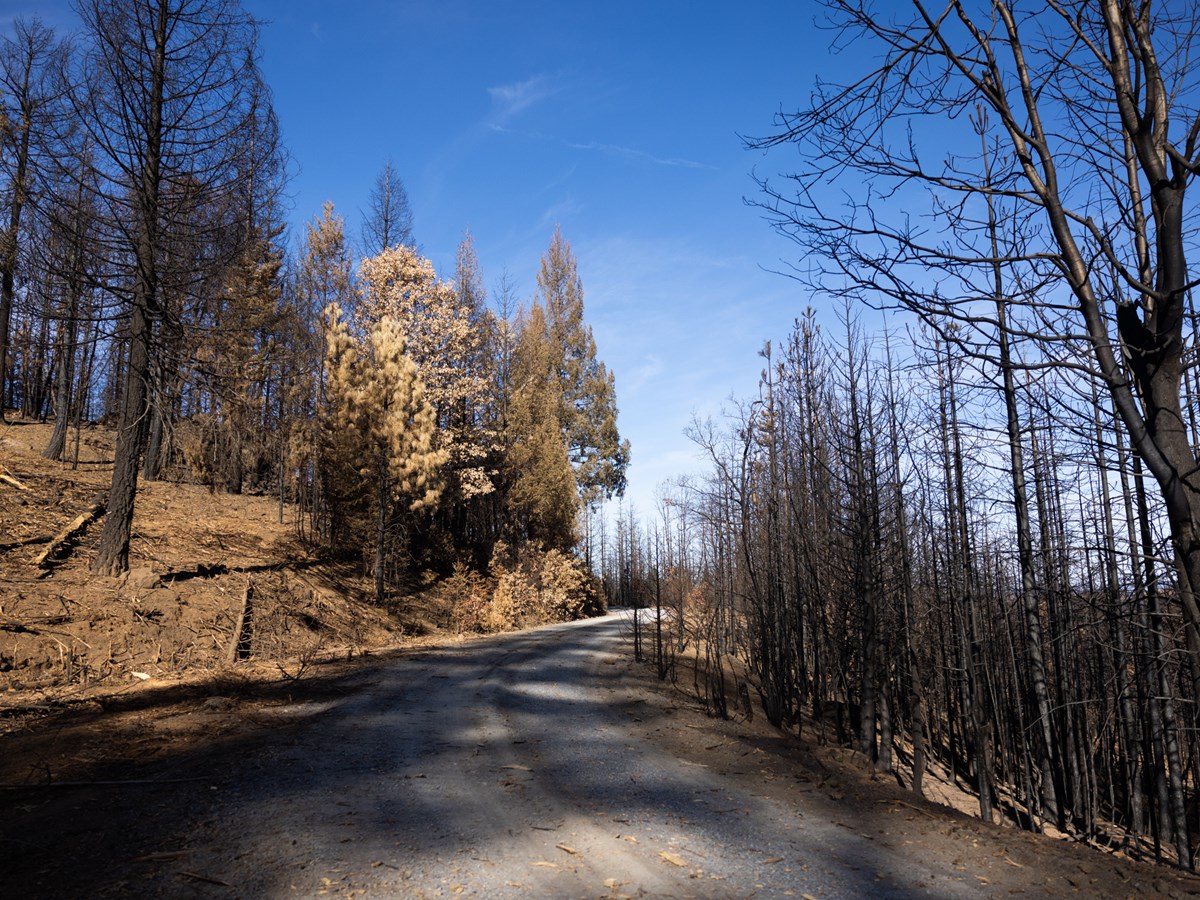 In a late October visit, Brandon Collins, lead scientist for Berkeley Forests, used a section along the dirt road as an example of an unexpected discovery. On one side of this road, he said, the forest had previously been treated with various methods aimed at minimizing wildfire danger, like reducing fuels on the forest floor. On the other side of the road lay vast, untreated wildland.

While treated areas often slow down the spread of fire coming in from an untreated area, Collins said that wasn’t the case in this particular section. Here, the fire had continued to spread into the treated area and burned trees to a crisp.

“I did expect to see more green trees here because I knew we'd done really good work here,” Collins said. “That to me is reflective of how severe this was.”

While researchers are still looking into the effects of the Mosquito Fire, they shared some insights about what it can teach them, and the ways in which it expands on problems landowners are facing everywhere.

Too many burnt trees

Roughton said the Mosquito Fire’s aftermath poses a difficult problem for the forest. Many acres of trees were burned in the fire, and both forest managers and landowners are not sure what to do with them.

“There's too much burnt timber that has a limited shelf life and not enough places to put it,” she said.

Typically, landowners would try to recuperate the loss of a tree by cutting it down and selling it. Once a tree has burned up, they have about two years to cut it down —  after that, Roughton said there’s a good chance it’ll begin to rot and become worthless. But an increase in fire activity and severity in California in recent years has forced loads of burnt timber on the market, making it a hard sell.

“There's just a glut on the market, meaning that for a lot of landowners, it's difficult to find a purchaser for that material,” Roughton said.

For Blodgett, profits from the sale of burnt trees would usually fund forest management efforts like prescribed fires. Now, Roughton said Blodgett is missing out on the profits typically needed to sustain those efforts. She said it’s a problem many landowners across California are grappling with, and one that doesn’t seem to be letting up any time soon.

“We start to see light at the end of the tunnel and then another large, high severity wildfire happens,” she said. “And it kind of sets us back again and starts us over.”

Roughton noted that although this is a problem, more funding in recent years from the state has helped. However, other barriers — like a small labor force to do the work — make action difficult.

The last piece of this puzzle: carbon. While a live tree helps reduce carbon pollution by storing it, a decaying or burnt one will start to release it into the atmosphere. Roughton said that another pressure point includes thinking about how to get burnt trees cut before carbon is released, despite inadequate resources to get the job done.

Where the wildlife goes

Spotted owls have nested in parts of Blodgett Forest for years, and there’s one in particular that researchers grew fond of.

Rob York, co-director of Berkeley Forests, said he never called the owl by a particular name but researchers in the forest would generally refer to him as “the old, crusty guy” in the area.

The Mosquito Fire burned through a part of Blodgett that included the owl’s nest. Since then, no one has seen him. York said he’s not sure what happened to him, but researchers working in the forest are hoping for his return.

“It’s very sad for me that his home is not there anymore,” York said.

There’s a long story behind spotted owls and Western forests, but here’s the short of it: after a period of over-harvesting trees in the 1900s, advocates and owl scientists pushed for protections for the spotted owl. These protections often meant leaving patches of the forest alone, which meant no logging. However, it also meant treatments of those areas with methods like tree thinning and prescribed burning were discouraged.

But as fire after fire ravages California, Collins said those views are changing. He said the King Fire in 2014 had a particular impact on owl researchers; they saw the blaze move so quickly that many animals were unable to escape. The area that burned in the King Fire had once been home to a multi-decade study of spotted owls. Collins said about half of the research area was burned in the fire, killing owls in the process.

“That changed so much about what we understood about risk,” Collins said. “Something’s changing, right? So no treatment is not no change.”

Collins said he suspects the owl loved by Blodgett researchers was able to get away as the Mosquito Fire approached, since the fire wasn’t moving quite as quickly. But even so, for this owl and other animals who fled, surviving the fire itself is only the first step.

“It's not like they just move on,” he said. “They're actually spending the majority of their time looking for another place to live as opposed to actually reproducing.”

Wildfires also shrink habitable areas for animals. For spotted owls, that might mean fewer of the large trees they typically need to nest. Collins said that overall, this can make populations decrease. It’s why he’s interested in finding more ways to protect those habitats, he said, which includes active forest management.

“It's time to revisit our policies and do more active management and conserve… the most important features of that habitat,” he said. “Something to protect those large trees so that... they persist through these events.”

After the Mosquito Fire

Thinking back on the burnt patch of treated forest along the dirt road, Collins said that he has some questions he wants to look into in the coming months. What’s clear now, he said, is that even treated areas aren’t completely safe. 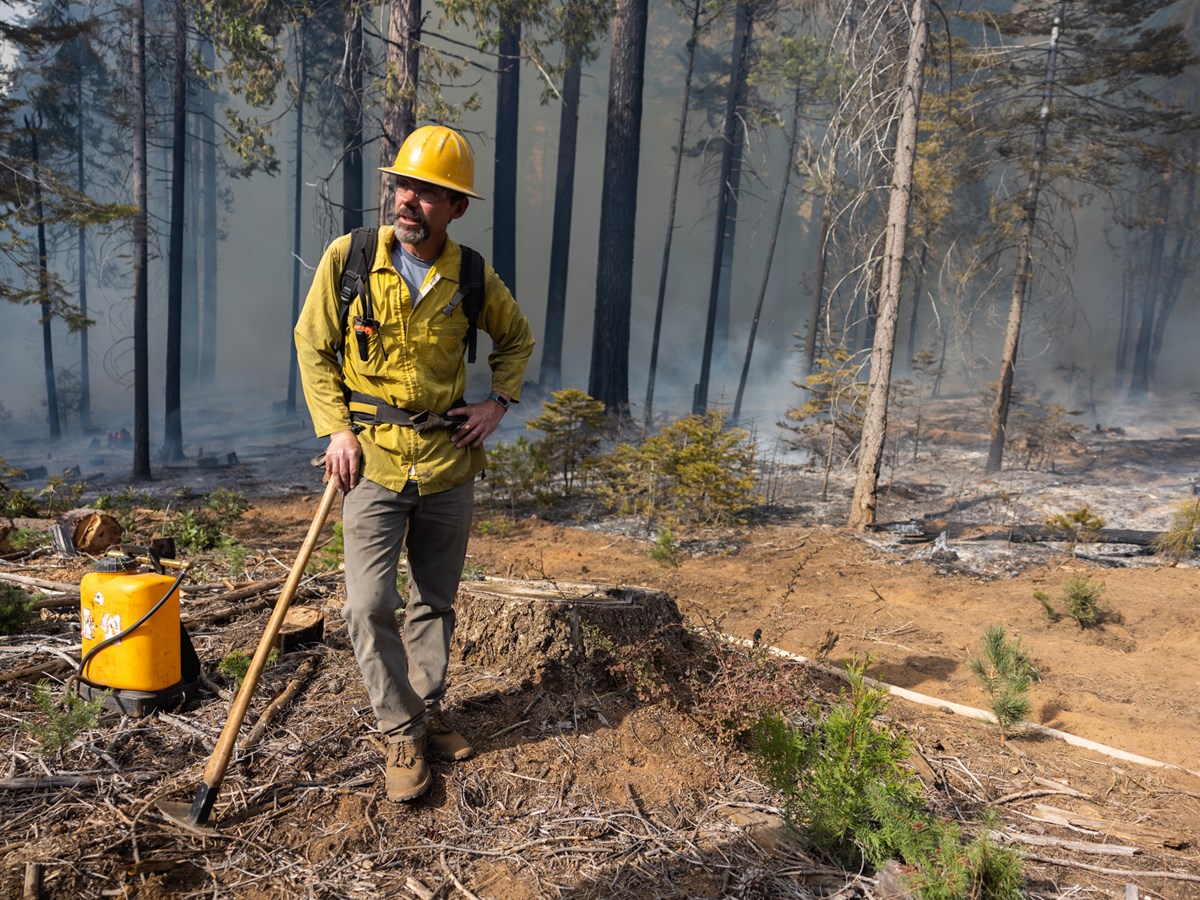 “If you're surrounded on multiple sides… by more vulnerable conditions, you're still vulnerable yourself,” he said.

York said that he’s been thinking about this problem too. One solution, he said, could be treating “diffuse, smaller patches,” or scattering treatments across a larger area, which could help the forest as a whole.

But that’s not a particularly easy solution and still requires a lot of active treatment in the forest’s future.

For now, researchers at Blodgett are working to see what lessons the destruction left by the Mosquito Fire might teach them. After all, these impacts are similar to what landowners have seen in the wake of severe wildfires all over the state.

“We're just thinking about how we can use the impacts that we saw on our property to sort of help other landowners, as we are not unique,” Roughton said. “There are so many landowners in California dealing with this.”