Ananya Bapat is a student at UC Davis.

For Ananya Bapat, getting to the University of California Davis was a feat of coordination. In her second year at De Anza College, Bapat spent her fall semester contacting counselors and admissions officers at the community college and the UC, trying to ensure that her hard-earned credits would transfer to a new campus. The conflicting advice they gave her, she said, only added to the confusion of the transfer experience.

“The process itself can be really overwhelming … coupled with (the fact that) you’re a second year in college, you’re transferring on top of classes and everything,” said Bapat, who is currently a fourth-year student at Davis and a peer advisor at the university’sTransfer and Reentry Center.

A new pilot program may make it easier for students like Bapat to transfer to the UC starting next fall. Under the dual admission program, high school seniors rejected from the UC can enroll at a California Community College with a conditional offer of admission to one of six UC campuses. They’ll have access to the UC campus from the first day of their community college career, and can use UC libraries, attend transfer events and receive advice from special dual admission counselors.

The program specifically targets students who have missed at least one of 15 high school courses required for UC admission, but earned a high school grade point average of a 3.0 or higher. During the UC Board of Regents meeting last week, Provost Michael Brown touted the program as advancing academic equity in the state. He added that personal challenges or a lack of UC-required courses at high schools can prevent students from preparing for admission, at no fault of their own.

At the same time, the program aims to address some of the obstacles preventing community college students from transferring. Only 19% of California Community College students who intend to transfer to a four-year university successfully do so within four years, according to the Public Policy Institute of California.

Abeeha Hussain, a fourth-year UCLA student and the transfer student affairs officer for the UC Student Association, said she believes students will take advantage of dual admission, as long as UC campuses actively promote the program to local high schools.

“It really creates this incentive for students to be like, ‘I’m not getting rejected because I’m not good enough for the school, I’m being deferred to admission later,’ ” said Hussain, who transferred from Palomar College. “Of course I’ll go to my community college if it means that I’ll eventually get to go to the UC of my dreams.”

Approximately 10,000 high school students apply to the UC every year without meeting freshman eligibility requirements, UC admissions director Han Mi Yoon Wu said at the Regents meeting. Of this population, 3,700 students have not met the UC’s high school coursework requirements but have GPAs of 3.0 or higher, making them eligible for the pilot program.

Students who receive a freshman offer of admission to the UC are excluded — even if they join the 7,000 individuals who annually turn down their UC acceptance to attend a California Community College. The UC may also exclude some majors from the dual admission pilot, which will admit students until fall 2025, including computer science and engineering at certain campuses.

A similar program is in the works at California State University, where it will also include students who were admitted but are unable to immediately attend due to financial or personal challenges.

Entering community college with a clear path to a UC campus can set transfer students up for success, said Hans Johnson, a senior fellow at the Public Policy Institute of California. He added that the early offer of admissions distinguishes the pilot program from existing transfer pathways at the UC, which don’t admit students until spring and lack the same access to UC campuses and support.

Dual admission “could be really powerful in connecting a student with the campus or campuses that they’re interested in going to,” Johnson said.

Regent Eloy Ortiz Oakley, the former chancellor of the California Community Colleges, said he believes the program will promote greater geographic diversity among UC transfers by providing a clear pathway forward for students in underserved regions of the state, such as the Central Valley and Inland Empire.

Students of color, as well as individuals who are low-income or the first in their family to attend college, may be more likely to apply to the UC without meeting admission requirements and have the most to gain from the pilot program, added Jessie Ryan, executive vice president of the Campaign for College Opportunity, a research and advocacy group.

Logan Ueno, a fourth-year transfer student at UC Davis studying political science, said regular visits to a UC campus can help transfer students make informed decisions about their futures and get the feel of attending a larger school.

“Coming from the community college, going to a UC is so much bigger, and there’s so much more resources that can be utilized on campus,” Ueno said. “I know that I’ve taken advantage of some of the resources on campus since I’ve transferred to Davis, and it’s really helped alleviate some of the stress about going to a UC.”

Having access to a coordinator who can act as a liaison between the UC and California Community College systems will also benefit students, who often shoulder the responsibility of navigating the transfer system themselves, Bapat said.

“That will help you on both ends of the transfer,” Bapat said. “I think (the coordinator) would clear up a lot of confusion and make the process even more streamlined.”

The UC’s pilot follows a handful of other dual admission programs across the nation. In Virginia, George Mason University has partnered with Northern Virginia Community College to provide students with automatic admissions to the university. The program, which began in 2018, has drawn attention for its robust support for community college students, who can spend time on the George Mason campus and take courses there as they earn their associate’s degree.

The UC also created its own dual admission program in 2004, but the program faced an early end after cuts to funding in the 2004-05 state budget. Only 67 students joined the fall 2004 dual admission cohort, despite the fact that more than 37,000 were able to apply.

Oakley believes the UC’s new program will fare better than its predecessor.

“I think now the governor is behind this pilot, I think the legislature is behind the pilot and I believe the regents are behind the pilot,” said Oakley, who left the community college system to become president of College Futures Foundation, which helps fund CalMatters’ higher education coverage. “I do think it has a much better chance of succeeding.” 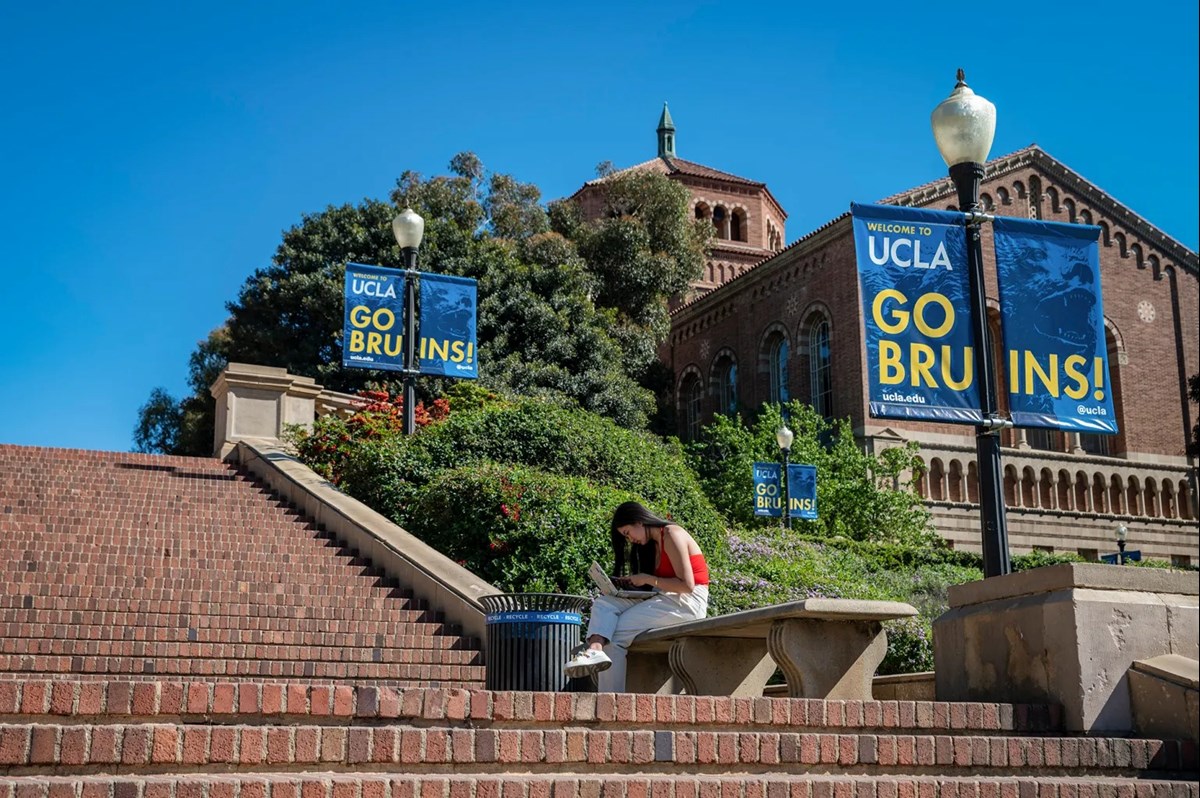 The UCLA campus in Los Angeles on Feb. 18, 2022. UCLA is one of three undergraduate campuses that won’t be included in the university’s dual admission program.Raquel Natalicchio / CalMatters

However, UCLA, UC Berkeley and UC San Diego remain glaringly absent from the new pilot program. Some Regents criticized the three highly-selective campuses for failing to participate. Student Regent-designate Merhawi Tesfai said the three campuses face some of the greatest challenges in admitting and enrolling students from underrepresented backgrounds.

“I feel like there’s the idea that (dual admission) would help that problem in some ways,” Tesfai said. “I would really want us to consider those three campuses being involved.”

Demand for the three campuses is high among transfer students. Forty-five percent of students who receive guaranteed admissions to a UC campus through one of the university’s existing programs end up instead enrolling in UCLA, UC San Diego or UC Berkeley, despite the lack of guaranteed admission pathways at these schools, Brown said during the Regents meeting.

However, he added, offering dual admission at high-demand campuses may unintentionally displace other deserving applicants.

“Every guarantee program displaces,” he said. “We also have a goal of being as fair as we can in admission processes, too.”

By creating a clear and affordable path to the UCs, Oakley said he hopes the pilot program will boost community college enrollment, which was on the decline prior to the COVID-19 pandemic and has continued to fall. California’s community colleges have lost 350,000 students since the 2019-2020 school year, a drop of more than 16%.

“I think the more students see themselves as transfer students, the more they’ll take advantage of their local community college,” Oakley said.

Tagami is a fellow with the CalMatters College Journalism Network, a collaboration between CalMatters and student journalists from across California. This story and other higher education coverage are supported by the College Futures Foundation.