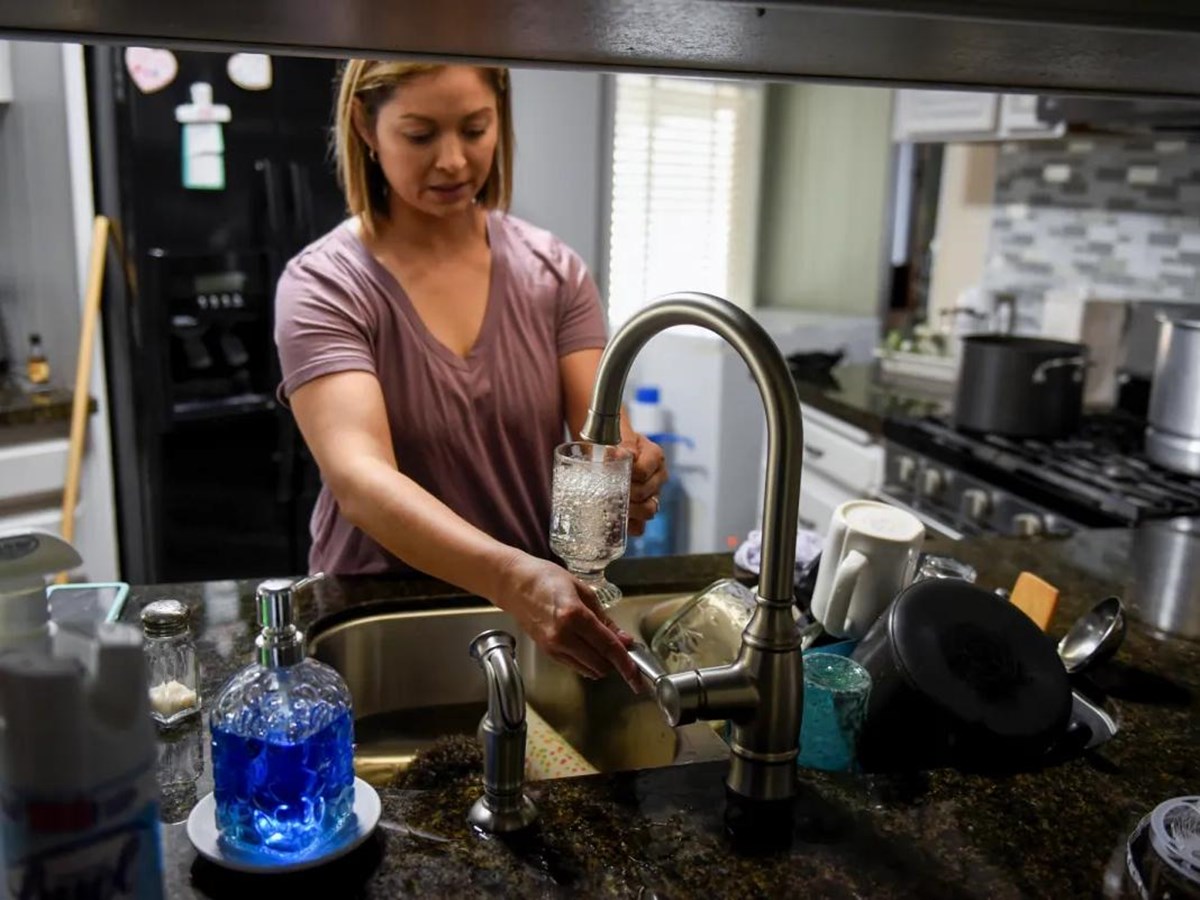 Esperanza Guerrero fills a glass with water in Teviston, on Oct. 20, 2021. California has begun the process of requiring water agencies to test their supplies for microplastics.

In summary: The state is the first in the world to require monitoring for tiny pieces of plastic, which contaminate people and wildlife globally.

California water regulators today approved the world’s first requirements for testing microplastics in drinking water sources — a key step towards regulating tiny fragments that are ubiquitous in the environment.

After years of research involving more than two-dozen laboratories, the State Water Resources Control Board unanimously approved a policy handbook for testing water supplies for microplastics over four years. Under the plan approved today, up to 30 of the state’s largest water providers will be ordered to start quarterly testing for two years, beginning in the fall of 2023.

“There’s no other place in the world — literally in the world — that has standardized methods for how you do this or has a monitoring program to look at drinking water,” said Steve Weisberg, executive director of the Southern California Coastal Water Research Project, which has analyzed various testing methods for the state. “California is really getting out there and being first.”

Microplastics, some so tiny they can be seen only with a microscope, have been found in creatures and their environments worldwide — from invertebrates in Antarctica to rain in the Rocky Mountains and human placentas. They work their way into waterways from synthetic clothing that sheds fibers in the wash, plastic waste crumbling into pieces and tires that erode on roadways.

Testing will begin with only source waters, not the water that providers send to people’s taps after treatment, said Scott Coffin, a research scientist with the State Water Resources Control Board.

Though the list of agencies that must begin testing is still a draft, water providers have been selected based on their size and the degree of treatment their water undergoes. Monitoring locations are expected to be finalized after public input this year.

Most draw from surface waters rather than groundwater. Included are two water-import giants — the Metropolitan Water District of Southern California, which serves 19 million people, and the Los Angeles Department of Water and Power — as well as the East Bay Municipal Utility District and the San Francisco Regional Water System.

The new requirements come after a state law, adopted in 2018, required four years of testing to determine how widespread microplastics are in drinking water, and guidelines establishing the levels that are safe to drink.

Multiple studies have reported health effects of microplastics for mammals, including sperm deformities, altered sperm count and testosterone concentrations. There’s still not enough research to say what concentration is safe for people, according to water board scientists, although there are signs that the smallest particles are more likely to cause health problems.

“We’ve known about the issue for decades. The public has been asking for governments to do something about it for a good 10 or 15 years. It’s been a bottleneck at the science and we, through our efforts, have been able to bring the science up to a level of maturity that is finally ready to be used in a regulatory sense,” Coffin said.

The policy handbook the board adopted today lays out a timeline for the testing ahead. After an initial, year-long pilot phase to test and hone sampling methods and provide training, monitoring is expected to take place in two, two-year phases. Water systems will be required to alert the public to microplastics detections in their annual Consumer Confidence Reports.

The water board’s standardized testing method is estimated to cost water systems between $1,000 and $2,000 per sample.

Water agencies said they “anticipate that the cost of compliance with this regulation would require significant investment” and requested help from state funding.

“The human health effects from microplastics is a statewide issue, and therefore justifies use of state funds to supplement the cost born by public water agencies to participate in this process.”

It’s unknown how much microplastics contaminate drinking water. Commonly used technologies used by many providers to treat drinking water remove most of the particles, according to research conducted in Canada and in Asia. But there is concern about the smaller particles evading treatment — the ones that may pose the most health concerns —  and few water systems use techniques that remove more than 90%, Coffin told the board.

“We are not expecting to find any significant contamination because our watershed is well-protected and all of our water is filtered before delivery to the public,” said Susan Teefy, East Bay Municipal Utility District’s water-quality manager.

The first two years of monitoring will be followed by six months of evaluation to determine the extent of the contamination and whether treated drinking water should be evaluated in the next phase — ideally with more sophisticated testing methods, Coffin said.

As part of the effort to develop a standardized test for microplastics, the Southern California Coastal Water Research Project sent jars of water spiked with microplastics and other substances to laboratories around the world. The jars contained plastics of different sizes and shapes, as well as red herrings such as shell fragments, cotton and rabbit hair.

Coffin said the testing method is two-pronged; one involves evaluating the particles under a microscope to determine their size, shape, color and number; the other involves beaming a laser to determine precisely what they’re made of.