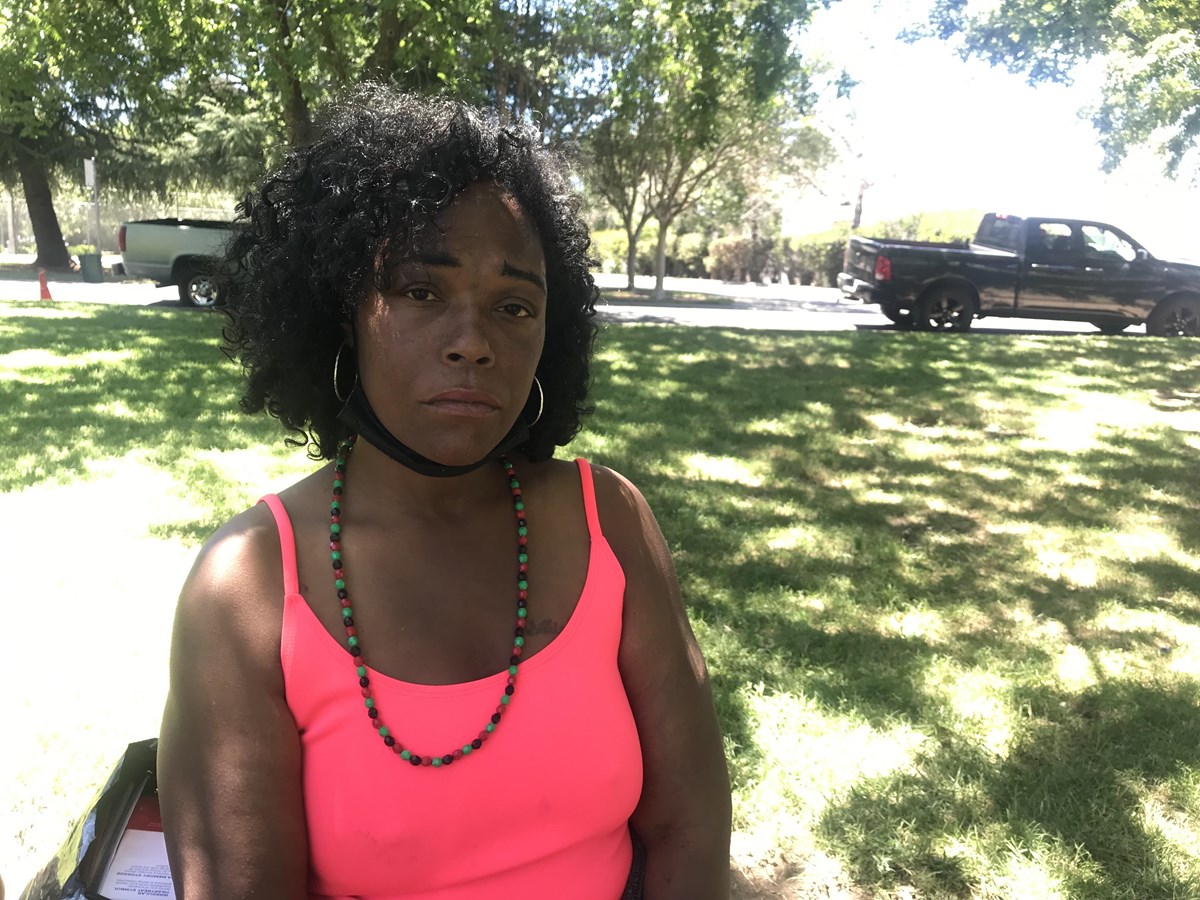 Michelle Taylor is on a waiting list for a homeless shelter near downtown. She says she supports the affordable housing project because it could offer stability for people like herself.

When Mikala and James Griffin set out to buy a house during the pandemic, they fell in love with the quiet streets and charming older homes of Woodlake, an upscale neighborhood in North Sacramento.

“It’s small and it’s safe,” Mikala Griffin, an emergency room physician, said while strolling down the middle of her tree-lined block on a recent afternoon. “That’s what we really kind of enjoy and appreciate about it.”

But when the Griffins learned about plans for a five-story affordable housing complex blocks away, they worried the tranquility they cherished would disappear. The narrow streets would possibly be clogged with traffic and cars from the apartment complex would be parked throughout the area. They feared it would be a dramatic change.

“This is not San Francisco,” said James Griffin, standing across from the future housing site, a former state armory on Arden Way near the Del Paso light rail station. “They’re trying to fit their square peg into a round hole. It just doesn’t make sense. This is a one-acre site. And you’re trying to put 300 some people there.”

So, the Griffins and their neighbors did what so many California communities have done when faced with the potential of new development, especially affordable housing: They organized and pushed back against it. 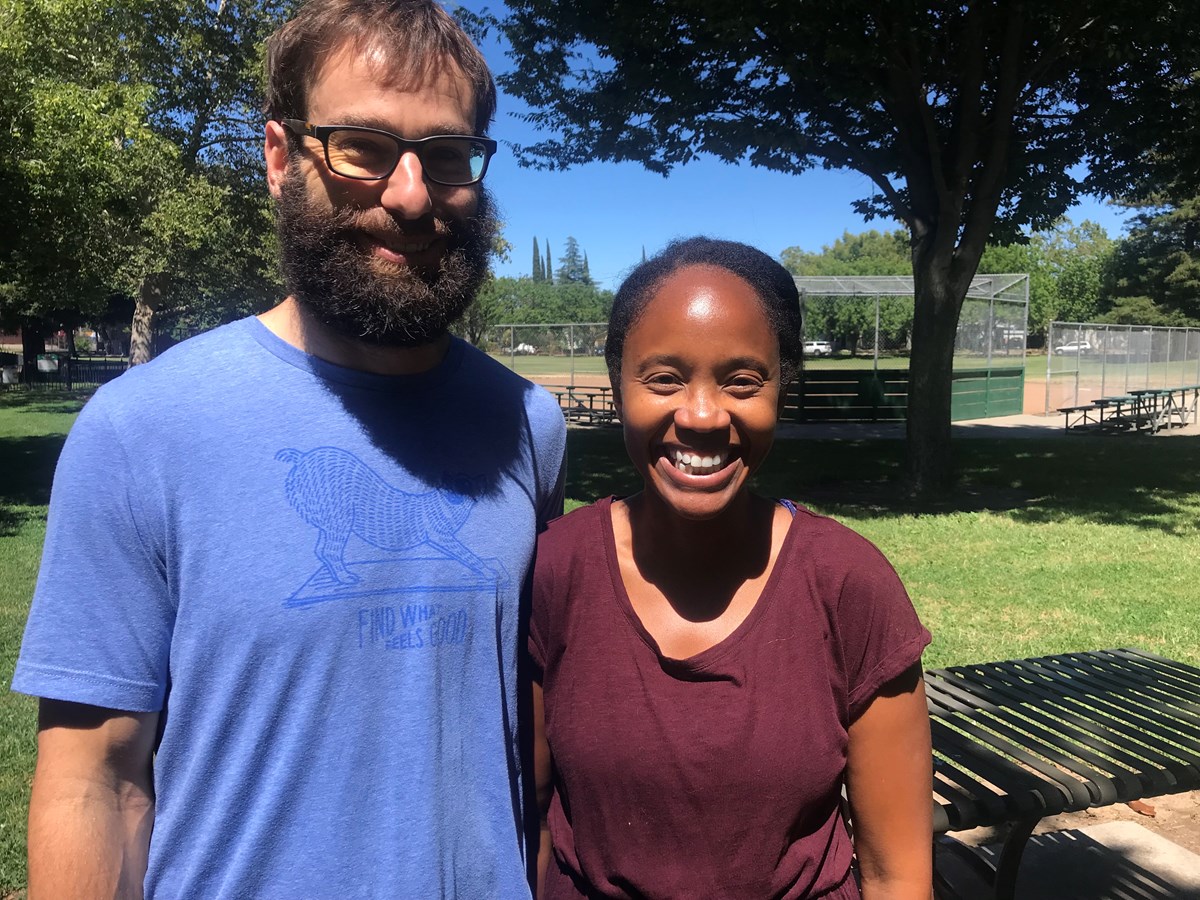 Woodlake homeowners Mikala and James Griffin say they oppose a five-story affordable housing project planned near their home because it is too large for the area.Chris Nichols / CapRadio

During a contentious public hearing in May, several City Council members, including some strong supporters of affordable housing, agreed the complex was the wrong fit for the area. But in the end, the council voted 5 to 4 to give the project its blessing and apply for a state grant to fund it.

While this project will move forward, city leaders and experts say many plans for affordable housing and homeless services never get off the ground — or they’re delayed or downsized. That’s in part due to pushback from organized neighborhood groups, sometimes referred to as NIMBYs for their ‘Not In My Backyard’ stance on development.

Yet there are sometimes good reasons for the resistance. Community leaders say North Sacramento has been a “dumping ground” for poorly planned housing and shelters, eroding trust in future proposals.

Whether this neighborhood opposition comes from marginalized or politically connected communities, it can be a powerful force, one “that increases the housing affordability crisis,” said Carol Galante, an affordable housing expert at UC Berkeley’s Terner Center for Housing Innovation.

That’s because existing home prices go up when there’s a lack of affordable supply, Galante explained. “The prices go up and people at the bottom of the income spectrum go on the street,” she added.

The lack of affordable options can also prevent people from getting back on their feet.

Michelle Taylor, who is on a waitlist for a homeless shelter, is an example. She’s one of the estimated 9,300 people experiencing homelessness in Sacramento County. That total is up 67% over the past three years, according to the 2022 Homeless Point-In-Time Count. The surge in homelessness coincides with a housing affordability crisis that’s worsened during the same period.

Seated at Woodlake Park on Arden Way near Old North Sacramento, Taylor said she lost her home a decade ago after experiencing domestic violence and has been without permanent shelter ever since. She said she supports plans for the nearby affordable housing project because it could offer security for people like herself.

The development will include 124 one-to-three-bedroom units for residents that make 25% to 60% of the area median income. One-quarter of those units will be reserved for formerly unhoused individuals and families, according to a city staff report.

But James Griffin, the Woodlake homeowner, says it’s not this project alone that will reshape the neighborhood. Several other apartment complexes are under construction or proposed nearby.

“That’s the biggest thing: Density, density, density,” Griffin said. “This project plus the five other projects. Or six, I don’t know, I lose count.”

Affordable housing advocates say it’s exactly that kind of building boom that’s required to meet Sacramento’s needs. The region has an estimated shortfall of nearly 60,000 affordable homes for its lowest-income renters, according to the Sacramento County Housing Need Report 2022.

The county is also short several thousand homeless shelter spaces, which are typically full on any given night, according to local officials.

North Sacramento has been and continues to be home to several city efforts to address the homelessness crisis.

Officials opened Sacramento’s first city-run emergency shelter on Railroad Drive in late 2017 before closing it in 2019. And earlier this summer, the council voted to open Sacramento’s first 24/7 respite center at the city’s former Powerhouse Science Center on Auburn Boulevard to offer unhoused people shelter during extreme heat and cold.

He said opposition is often fueled by the false stereotypes that unhoused residents are from out-of-town or “they’re all crazy drug addicts.”

“You need to do community education to explain that 90% plus of the people who are going to be in that [shelter or housing project] were born and raised in Sacramento,” Erlenbusch said. “You went to high school with them. They worked here. They fell on hard times.”

Sacramento City Councilmember Katie Valenzuela has received pushback in her Central City district for supporting affordable housing and homeless shelters. She acknowledged development has an undeniable impact on neighborhoods and some city-approved projects have been poorly planned.

Rebecca Sandoval said that list is long in North Sacramento. She’s taken issue with the city’s proposal to open a “Safe Ground” parking shelter near Northgate Boulevard and Interstate 80. The shelter would allow people who live in vehicles to legally park onsite. But Sandoval, a board member for the Twin Rivers Unified School District, said she has safety concerns given the location’s limited emergency access.

Sandoval said she also worries a camp with 150 vehicles will reinforce the stereotype that the community is “a dumping ground” for the city’s problems.

“Other parts of the city, they get a hotel for the homeless,” Sandoval said, referring to a state-funded downtown homeless housing project. “What do we get? We get a safe ground. And that’s a big concern. Businesses that are here have said they will leave if the safe ground comes.”

City leaders agreed there are valid concerns about the overconcentration of services in certain neighborhoods. But they also said more can be done to improve future affordable housing proposals and win over critics.

“The right way is early engagement, flexibility on things like number of units and the number of stories,” Valenzuela said.

Still, there are some neighbors who will never support affordable housing near them, no matter how much it’s needed, Valenzuela added.

No obligation to say ‘yes’

Such opposition has stymied Mayor Darrell Steinberg’s plans to open homeless shelters in each city district, despite winning council support for them last summer.

In an interview, Steinberg said the slow pace of progress is one reason he’s pushing for “a legal right to housing” in Sacramento and statewide, one that would compel governments to provide housing for everyone.

“Now, when a community group fights to say ‘No,’ there’s no obligation on the side of the government to say ‘Yes,’” the mayor said. “There needs to be a countervailing force to all the obstacles that currently exist to siting and building more affordable housing and shelter.”

Galante of UC Berkeley said Californians are more sympathetic today about the affordable housing crisis than in the past. But, she said, that sympathy doesn’t necessarily mean they support local projects.

“When it gets down to the individual development that happens to be next door to you, then you’re still going to have some opposition,” she said.

Woodlake homeowners James and Mikala Griffin said they also believe more should be done to address the housing crisis. They suggested converting unused office space into housing or building on vacant lots further away from Woodlake’s single-family home neighborhood.

But they said embracing a project with the size and density of the one proposed near them just isn’t realistic.

Though the project has been approved, the couple said it still hopes to work with its developer to scale back the size of the complex.

CapRadio journalists have spent nearly a year listening to residents of North Sacramento. As part of our community-engaged journalism mission here at CapRadio, they told us what issues matter to them, and those issues helped inform this reporting.