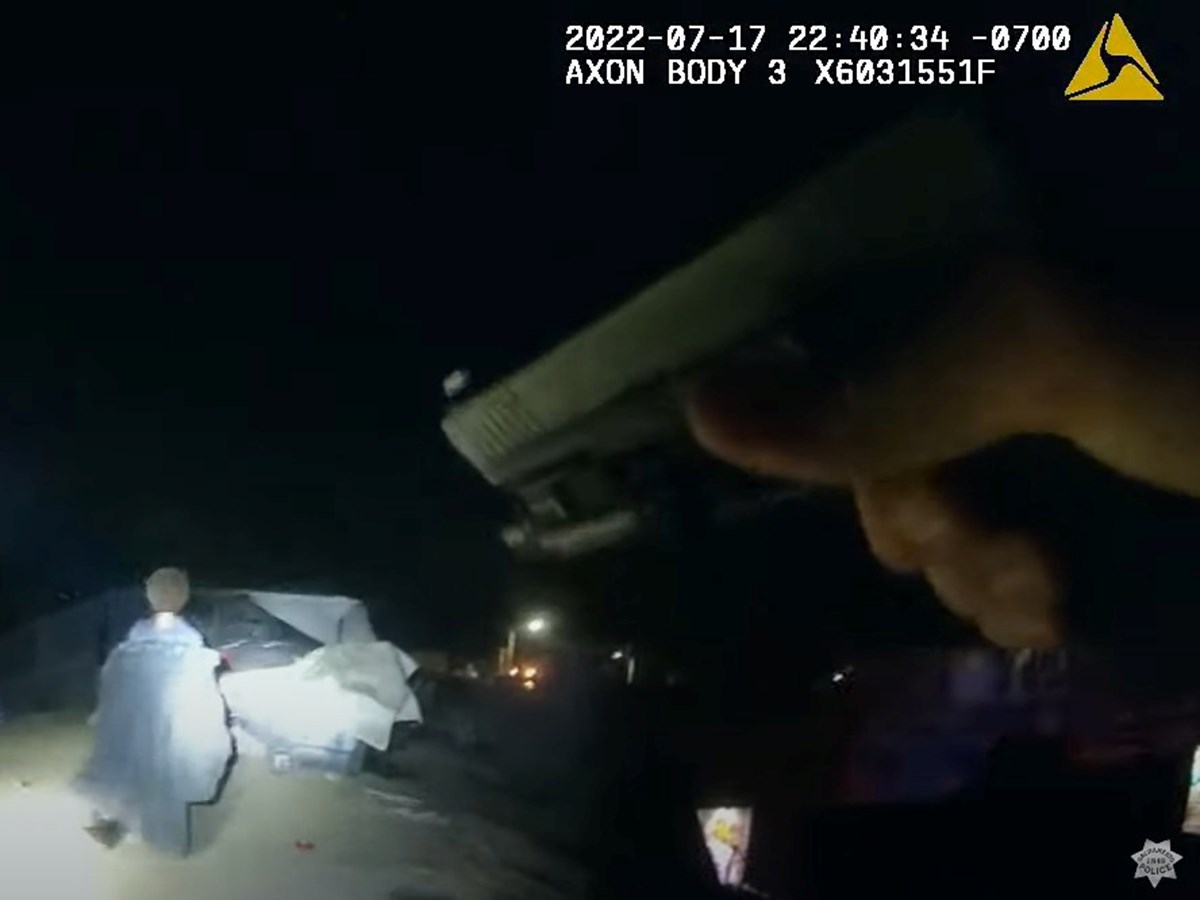 The Sacramento Police Department released body camera footage Tuesday of an officer shooting an unhoused man in the River District in July.

Police said officers were trying to arrest Darrell Buckner, 42, because he had a felony warrant for violating probation.

Video shows two officers repeatedly asking Buckner to go with them as he stands near an overpass around 16th and A streets. Buckner refuses and eventually lifts up a tarp that covers his belongings.

Buckner then walks toward two officers with his hands and arms covered under a blanket. As officers tell him to stop walking and put his hands out, Buckner says, “This is a federal officer. Put your weapons down, sir.”

Video then shows an officer firing two shots at Buckner, hitting him at least once. After a short chase, police arrest him. The Sacramento Fire Department transported Buckner to a hospital, police said in a press release.

Records show Buckner was booked into the Sacramento County Main Jail the next day. Police did not find weapons in the area, the department said.

Bob Erlenbusch, executive director of the Sacramento Regional Coalition to End Homelessness, questioned the need for police to confront the man in the dark of night.

“Why show up at 11 o’clock at night?” Erlenbusch said. “I can understand why the gentleman was scared. I’d be scared to death.”

Police did not say if officers could have served the warrant during the day, citing the ongoing investigation.

Erlenbusch said he strongly suspects the man is unhoused and lives in the River District, an area with a high concentration of homeless encampments where the shooting happened. He added Buckner showed signs in the video of mental illness.

Rather than confronting unhoused residents with guns and flashlights, Erlenbusch said the city should employ “trauma-informed care” to de-escalate potentially violent situations. He recommended teams of social workers, mental health and addiction specialists and peer advocates speak with suspects who are unhoused and may be dealing with a mental illness.

Council member Jeff Harris, who represents the River District, said the department’s current approach makes sense. He argues it is not feasible for police to bring social workers to every interaction with people experiencing homelessness, and that warrants are generally a police issue, not an outreach one.

“If they have an active felony warrant for their arrest, that kind of elevates things to an area where whether the person is housed or unhoused becomes less material than the fact that there is that outstanding warrant,” Harris said.

Harris added he is grateful Buckner’s injuries were treatable. Police only described the injuries as non-life-threatening, and video shows the back left shoulder of Buckner’s shirt stained with blood.

Buckner remains in jail as of Tuesday, records show. He is ineligible for bail and has a court hearing scheduled for Aug. 30.