Shawna Barnes, right, and her coworker Walter Mullins of The Clean and Safe Team clean up an area in the River District on Tuesday, April 26, 2022.

Barnes is part of the Clean and Safe Team, which consists of five homeless and formerly homeless residents who pick up trash at encampments in the River District, a neighborhood at the center of the region's homelessness crisis. City leaders say the team could be replicated citywide and has the potential to transform the lives of its employees.

For Barnes, the job is about more than just cleaning blighted areas. She says it’s also about connecting with camp residents.

“You don’t throw anything away that they want to keep. You respect them,” Barnes explained during a recent clean-up, noting she offers resources to people at the camps who want to get off the streets. “We are here to help. We’re not here to do anything bad.”

Just a few years ago, Barnes was living in a tent camp in Del Paso Heights. She said she was on drugs, cut off from her family, including her teenage son. Barnes “had lost everything.”

The 42-year-old Sacramento native is now housed and has a steady paycheck due in large part to her employment with the Clean and Safe Team.

No decision has been made yet on whether to fund the program beyond the current fiscal year, which ends June 30. The city’s budget won’t be approved until mid-June. 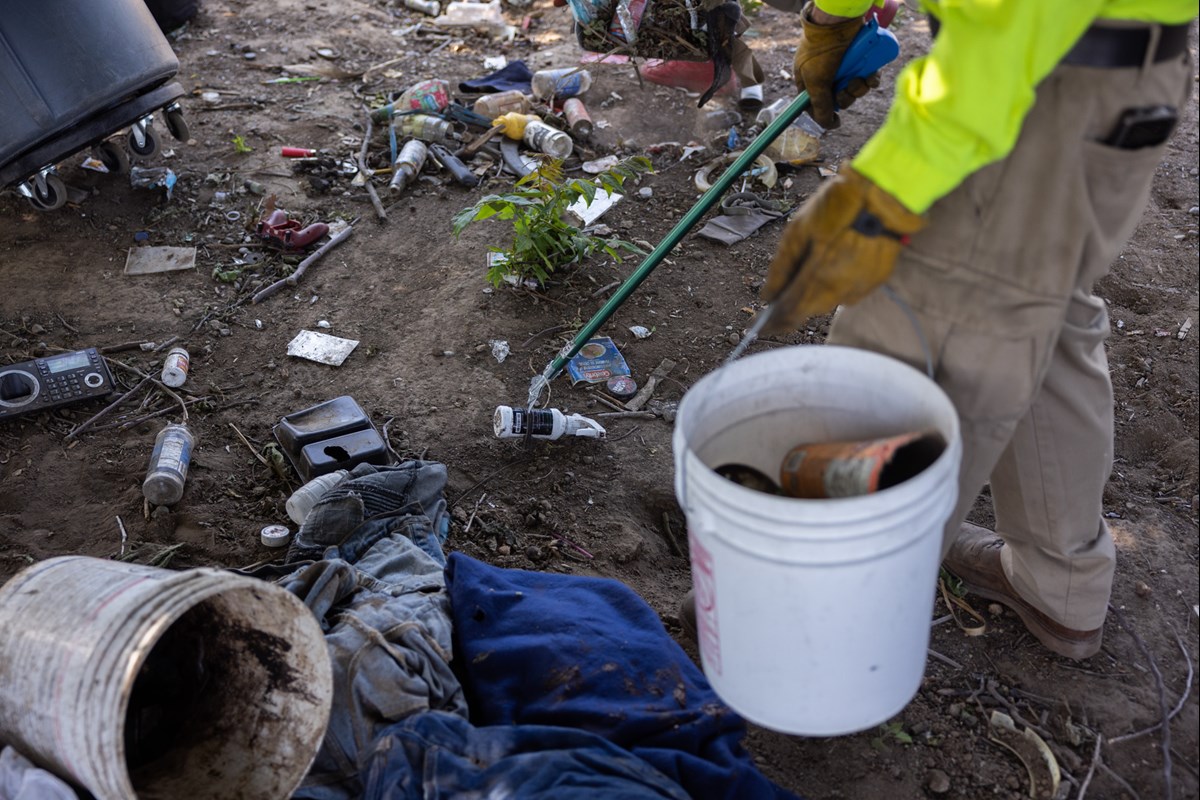 The Clean and Safe Team cleans up an area in the River District on Tuesday, April 26, 2022.Andrew Nixon / CapRadio

Mayor Darrell Steinberg is a strong backer of the program.

“The mayor says the River District program will continue,” Mary Lynne Vellinga, his chief of staff, said in a text last week. “We will make sure it does.”

Other city officials have touted the program, too, calling it a cost-effective model for other business districts to follow.

Councilmember Jeff Harris, who currently represents the River District, did not respond to requests for comment. In March, he praised the program and said the neighborhood “looks a lot better than it has in a long time.”

The River District is home to scores of homeless encampments scattered along sidewalks, in bike lanes, on vacant lots and along the American River Parkway. The area is also home to many homeless service organizations, including several shelters.

“The latest estimate is that we have between 1,500 and 2,000 people living just in our mile and a quarter square border in the River District completely unsheltered,” said Jenna Abbott, executive director of the River District Business Association.

The most recent count of Sacramento County’s unhoused residents in 2019 revealed more than 5,500 people experiencing homelessness, a 19% increase over two years. Results from this year’s county will be published later this spring. Abbott said her figures are based on recent federal surveys and the district’s own tallies.

She added: “It is ground zero for homelessness in the region.”

How the program works

The program started in June 2021 as a public-private partnership between the River District Business Association and the city of Sacramento.

It operates Monday through Friday in the neighborhood north of downtown, which has one of the region’s highest concentrations of unhoused residents. So far, the team has removed approximately 180 tons of trash, according to the business association.

Abbott said her association hires workers from local homeless shelters, pays them between $15 and $21 an hour and provides paid time off. Workers become official district employees, drive their trucks, wear their uniforms and receive gloves, trash bags and other equipment needed to clean near campsites. 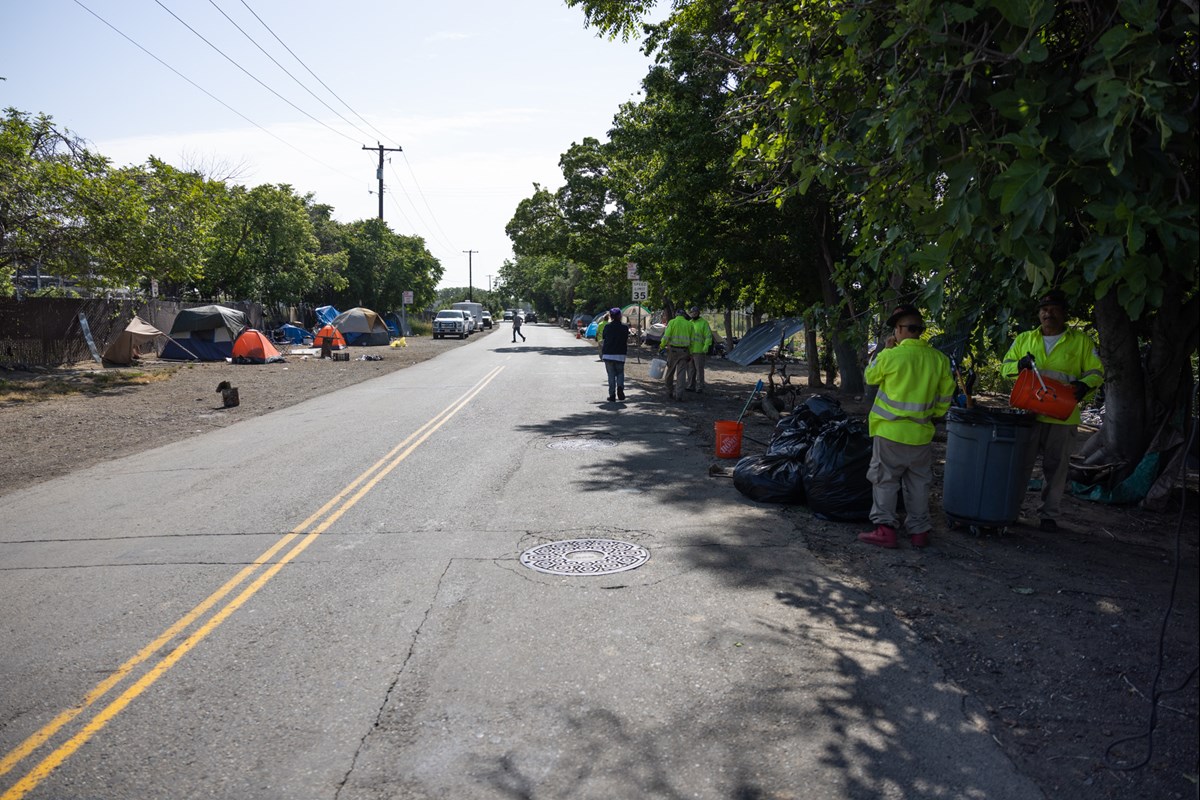 The Clean and Safe Team cleans up an area in the River District on Tuesday, April 26, 2022.Andrew Nixon / CapRadio

Community advocates say there’s a misconception that people who are homeless aren’t willing to work.

“There are a lot of folks who have hopes and dreams for their careers and are willing to work even if it’s volunteer work,” said Angela Hassell, executive director of Loaves & Fishes, a homeless services center in the River District.

Along with the trash pick ups, the Clean and Safe Team’s employees meet each week with team manager Chris Evans to learn job skills, including time and resource management.

“They have to learn those skills so that they can get back into society. And they are slowly but surely doing it,” Evans said.

While the business association runs the program and pays for operating costs like fuel and supplies, the city pays for worker salaries. The Department of Community Response budgeted $250,000 for the program during the current fiscal year which ends June 30.

Funding for the team comes from the city’s Department of Community Response. Gregg Fishman, a spokesperson for DCR, said the department hopes to continue the program.

Abbott said the business association would have to end it if the city stops paying for salaries.

She added that the association has spent approximately $151,000 to cover operating expenses while a private company, 29th Street Capital, donated $50,000 to pay for the Clean and Safe Team’s vehicles.

“I think we could afford to float it for a month or two but that would be it,” she wrote in an email.

‘It gives me the confidence’

While the program is considered an early success, city officials and advocates say a much greater investment in affordable housing and social services is needed to address the humanitarian crisis in places like the River District.

Two Clean and Safe Team employees have secured housing during their time with the program, but others are still searching.

Walter Mullins, 61, has been without a permanent home for more than a year. He said the job’s steady pay has helped him buy a van. He’s hoping to find an apartment soon.

“It gives me the confidence and opportunity to get back into normal life — a better living,” Mullins said of his work.

For Barnes, the opportunity has been life changing.

“They blessed me with this job and it’s amazing,” Barnes said after filling up a dozen trash bags at an encampment in late April with her team members.

“I’m not homeless anymore,” she added. “I got my family back. I’ve been off drugs for two years. My life is just amazing.”