Not many were fooling themselves at the California Republican Party convention: The state GOP is in dire straits.

“In case you haven’t noticed out there, we’re 0 for 8 in over 20 years,” Shawn Steel, former party chairman, told delegates Sunday. “It’s time we won statewide offices.”

But just how the party can pull itself out of its rut is less clear.

It probably didn’t help to have the distraction of U.S. House Minority Leader Kevin McCarthy of Bakersfield, the subject of a bombshell report just days before the convention: He was caught on tape talking to fellow Republicans about urging then-President Donald Trump to resign after the Jan. 6, 2021, storming of the Capitol.

Tea Party California Caucus leader Randall Jordan said the audio showed McCarthy’s true colors: “We’ve never been a friend of Kevin McCarthy’s. He basically stands for everything Donald Trump tried to weed out of our party.”

But others including state party Chairperson Jessica Millan Patterson, a McCarthy ally, rallied behind him. “When Republicans take the House, I have no doubt that he will be the next Speaker of the House,” she told reporters.

And when McCarthy took the stage Saturday night for the convention’s keynote speech, it was to a standing ovation from about 500 delegates gathered in an Anaheim hotel ballroom. He praised Trump, blasted Democrats and the media and called for party unity.

Still, the state GOP has much bigger things to worry about than the kerfuffle of the moment. To become more relevant, California Republicans must present the right identity to voters.

Jenny Rae Le Roux, who is running for governor, said the party needs to have the message, the messenger and the money — and offer hope, not just call out Gov. Gavin Newsom for failures.

Party officials and delegates also sought to preach a message of unity, in particular: “Don’t trash other Republicans.” But divisions surfaced during the voting for official party endorsements. 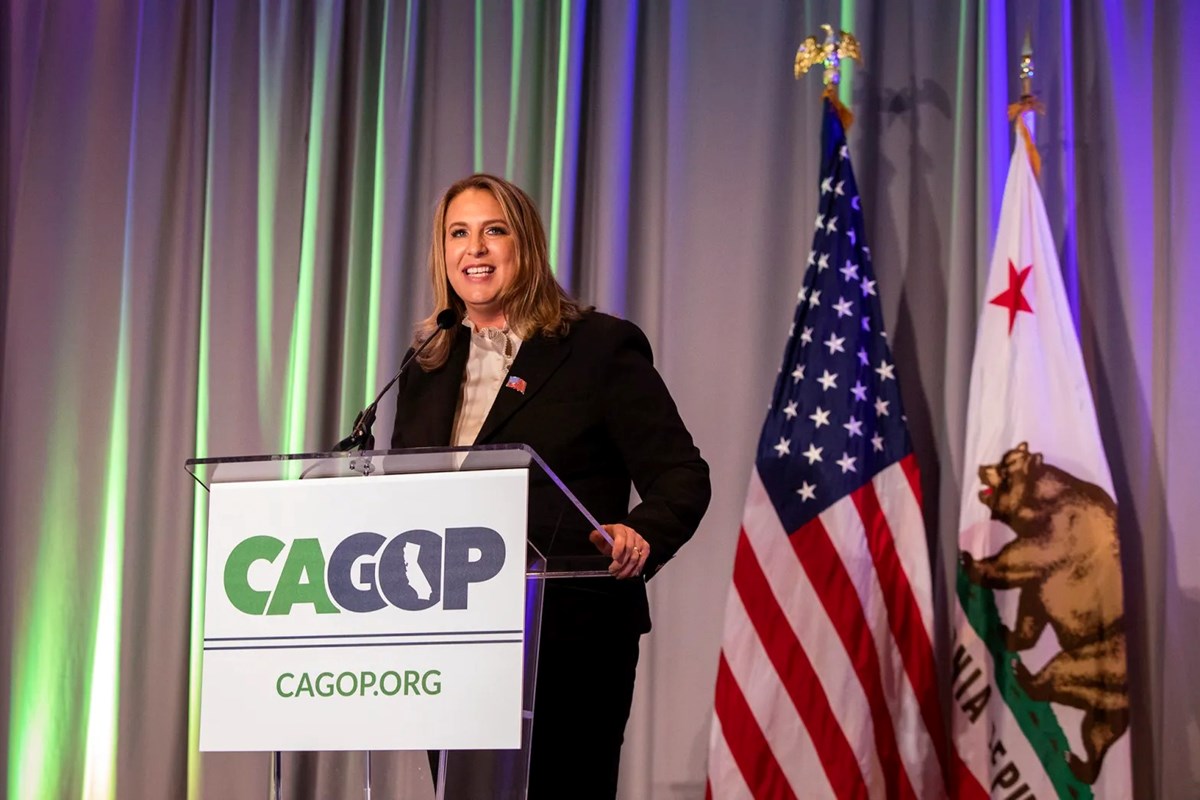 Le Roux, herself, went off script, all but accusing state Sen. Brian Dahle, another candidate for governor, of trying to buy the endorsement through a campaign donation to the party from a committee controlled by his wife, Assemblymember Megan Dahle.

In the end, Le Roux didn’t even make it past the first round of balloting for the party endorsement for governor. On the fourth ballot, Dahle eked out the nod over Anthony Trimino, who had the support of party activists and who set up a boxing ring at the convention, with posters advertising his fight against Newsom. (The party did not endorse in the unsuccessful recall campaign against Newsom last September, or before the primary in 2014 or 2018, either.)

It also took multiple ballots to settle the attorney general endorsement between party factions to take on Rob Bonta, the Democrat and Newsom appointee. In the second round, Nathan Hochman passed the 60% threshold against Eric Early, who said it’s California Republicans’ destiny “to fight the evil woke.”

Both Hochman and Early are trying to make it through to the November general election against Sacramento County District Attorney Anne Marie Schubert, a former Republican who is running without a party affiliation but with the support of many law enforcement groups.

Also, the party endorsed Mark Meuser in his long-shot bid to defeat U.S. Sen. Alex Padilla, a Democrat whom Meuser called Newsom’s “appointed puppet.” Angela Jacobs Underwood was backed in the race for lieutenant governor. Lance Christensen was endorsed for superintendent of public instruction, a nonpartisan race that could be decided in June. And Lanhee Chen, who promised an “audit a day” if elected controller, won the party blessing uncontested.

The party did not endorse for insurance commissioner, or for secretary of state, though Rachel Hamm, who is backed by Trump allies and disputes that he lost in 2020, finished ahead of Rob Bernosky, a last-minute candidate supported by the party establishment, though well short of the 60% support needed.

Other highlights from the weekend:

California Republicans hope that voters won’t ignore sky-high gas prices, rising inflation,  or concerns about crime and homelessness — and will blame Democrats as the party in power for not doing better. That may be their best hope of finally breaking their long statewide losing streak.

A long road back

California Republicans have been on a steep downward slide for nearly two decades, since they triumphantly recalled Gov. Gray Davis in 2003.

The last GOP candidates to win statewide came just a few years later — Gov. Arnold Schwarzenegger and Insurance Commissioner Steve Poizner in 2006 — and efforts to attract major candidates who can turn around the party’s fortunes have become increasingly dire. In the past two U.S. Senate races, in 2016 and 2018, Republicans finished outside the top two in the all-party June primary and did not even make it to the November general election, while gubernatorial hopefuls now routinely lose to Democrats by 20 percentage points or more.

After the push to recall Newsom fizzled last fall, all of the leading Republicans who ran to replace him — including talk radio host Larry Elder, former San Diego Mayor Kevin Faulconer and 2018 gubernatorial candidate John Cox — passed on challenging him again this year, forcing the party to start from scratch. Those who are running have little name recognition or money.

The party is also nearing irrelevance in Sacramento, where it holds fewer than a quarter of the seats in the state Legislature. And even after a handful of pickups in 2020, Republicans make up only about a fifth of California’s congressional delegation.

The debate continues over the best path forward — moderate their positions and appeal to disaffected voters turned off by Democratic excesses, or double down to whip up enthusiasm among the conservative base — though neither has managed so far to staunch or turn around the California Republicans’ long-term losses.

The question now is whether the state party will be able to capitalize on what is expected to be a strong year for Republicans across the country amid sagging approval of Democratic President Joe Biden.

Conservatives sense opportunities to defeat Bonta, as voters grow increasingly wary of crime, and win the race for controller, in which Chen, who has raised more money than any other Republican statewide candidate, is making the case that he would be an independent fiscal watchdog for the state.

Yet even those are long shots in an era where partisan affiliation has become more important to voters than ever. While the GOP is no longer trailing no party preference in voter registration, as it briefly did a few years ago, fewer than 24% of California voters are signed up with the Republican Party, compared to nearly 47% who identify as Democrats.

Jim Brulte, a former Republican legislator and party chairperson, said focusing on the GOP’s weakness in the most high-profile races overlooks a solid foundation it has built elsewhere. The party has been in a strategic retreat for nearly a decade, directing its more limited resources into key congressional and legislative districts, he said.

He compared the political environment to 2014, the last time a Democrat was in the White House and “we didn’t have a super-strong top of the ticket” — little-known Neel Kashkari ran unsuccessfully for governor against incumbent Jerry Brown.

“It was a pretty good year for Republicans in California,” Brulte said.

In 2014, the GOP flipped three seats in the Assembly and another in the state Senate, temporarily breaking Democratic supermajorities, though it made no gains in Congress and lost all statewide offices.

“We have something at the top of the ticket to drive turnout and his name is Joe Biden,” Brulte said. “Voters want a change, and Republicans are that change.”