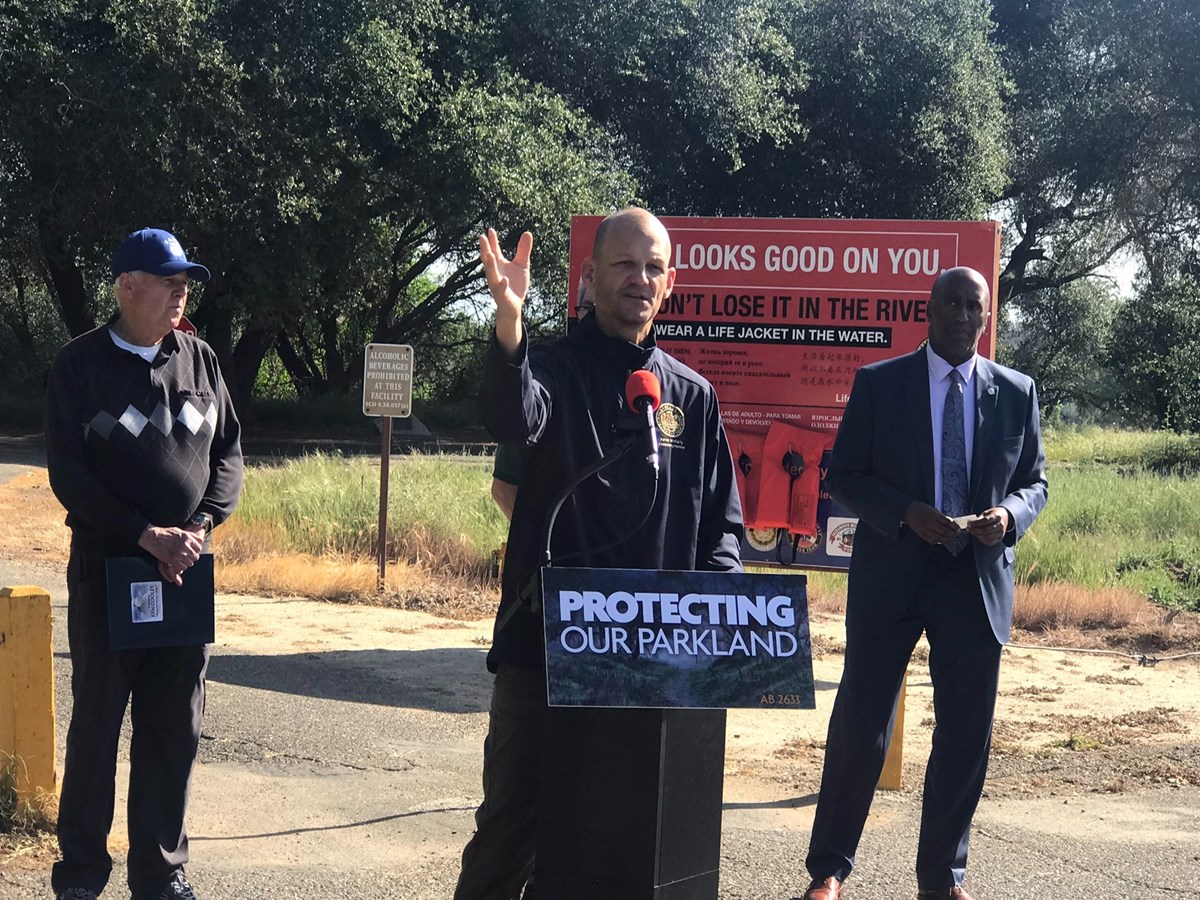 Assembly member Kevin McCarty (D–Sacramento) speaks in favor of a bill that would ban homeless encampments along the American River Parkway.

Three Democratic state lawmakers from the Sacramento area are backing legislation they say would speed up the removal of homeless encampments along the American River Parkway — and eventually ban the camps from the 23-mile natural corridor.

“You can clear those out because they don’t belong here,” Cooley told reporters at a press conference at the El Manto Access Point in Rancho Cordova in early April. “I think that’s a small step that aligns with the great American tradition of preserving wild places.”

The legislation comes three months after the American River Parkway Foundation demanded the city and county remove 750 unhoused people camping along the corridor by the end of the year. The environmental preservation group cited multiple hazards tied to the camps, including increased fire danger, diminished water quality and the spread of hazardous materials from intravenous drug use.

Assembly members Kevin McCarty (D–Sacramento) and Jim Cooper (D–Elk Grove) also spoke in favor of the bill. The lawmakers said a federal court ruling will still require the county to offer people shelter and services before removing them.

The press conference took place less than a mile from where 20-year-old Emma Roark was killed in a campsite after she walked to the parkway to take photos in late January. A homeless man who had been living along the river was arrested and charged with her rape and murder.

Lawmakers cited her death as one reason to move forward with the bill.

“Look, not all homeless [people] are murderers and criminals down here. But some are, and some of the homeless people get violated by some of these campsites as well,” McCarty said. “But, regardless, this parkway is a special place for Sacramento and it shouldn’t be allowed to be a campsite for people without homes.”

Crews cleared more than 1,600 individual camps last year, according to Sacramento Regional Parks, the county department that manages the parkway. A camp might consist of one occupied tent plus several additional tents used as storage.

But McCarty said “it’s not enough,” and that the process needs to move faster. It’s not clear how a state law would change that.

Currently, Sacramento County and jurisdictions across California must adhere to a 2019 federal court ruling known as Martin v. Boise, which prevents them from prosecuting people camping on public property unless certain conditions are met including the offer of an available shelter or a legal campground.

Sacramento County has approximately 1,100 indoor and outdoor shelter spaces, but they are all typically full. As of 2019, at least 5,500 homeless people live on the streets in Sacramento, though that number is expected to rise with the release of this year’s point-in-time count.

Several homeless advocates said they oppose the bill because clearing encampments does nothing to solve homelessness.

“There’s no place to put those folks,” said Faye Wilson Kennedy, co-chairperson of the Sacramento Poor People’s campaign, which advocates for building permanent supportive housing to address homelessness. “What it is doing is punishing people who are poor or unhoused.”

County officials estimate there are up to 1,000 people living in encampments on regional park properties across Sacramento County, with a large share of those along the parkway.

Despite the region’s focus on homelessness, it took the city nearly a year to build a single new outdoor homeless shelter.

McCarty said the bill would add urgency to city and county proposals to build more shelter and safe ground camping and parking locations. He added that if passed later this year, the bill would line up with the timing of a Sacramento city homelessness ballot measure.

The so-called “Emergency Shelter and Enforcement Act of 2022” would outlaw encampments on public property within city limits and require the city to approve thousands more shelter spaces.

As part of the state bill, lawmakers said they are proposing $50 million in grant funding for local governments “to support efforts to protect the parkway.” Those would focus on reducing illegal campfires and providing services and housing options to homeless people, according to a news release from Cooley’s office.

Mari Castaldi, a legislative advocate with Housing California, said her nonprofit has opposed similar bills in the past and will fight against this one.

She said removing camps can undermine ongoing efforts to get people housed and provide them with mental health services. Homeless residents can also lose documents needed to secure housing or employment, pushing them further to the margins, Castaldi added.

The bill is scheduled to be heard April 26 in the Assembly Water, Parks and Wildlife Committee.