Nevada County Mobile Crisis Team member Ernesto Alvarado talks to a woman, who alleged her son assaulted her while suffering from mental health issues, during a call in Penn Valley on March 15, 2022.

The man sat silently on a cluster of boulders when the Nevada County Sheriff’s Office mobile crisis team pulled up. His phone, an open can of Dr. Pepper and a colorful glass marijuana pipe splayed out beside him as he looked out on the wooded valley below.

Minutes before, siren blaring, sheriff’s Deputy Galen Spittler raced his patrol truck through the winding Penn Valley roads to respond to a report of a 33-year-male — one they had placed on a psychiatric hold last fall — assaulting his mother. Now the man stood calmly, barely responsive, as Spittler checked him for weapons.

Up the dirt road, his mother sobbed. The man was not taking his medication for bipolar disorder since he got home from his latest hospital stint a few weeks ago, she said. When she tried to call the local behavioral health agency for an appointment, she said he threatened to kill her and threw a baseball bat at her.

Clinician Ernesto Alvarado led the woman through breathing exercises to calm her down. He joined Spittler on patrol a year and a half ago when Nevada County created its mobile crisis team — a partnership between the sheriff’s office and the behavioral health department meant to defuse volatile situations and funnel more people into services rather than the criminal justice system.

“It changes how your body reacts to things,” Alvarado told the woman. He offered to take her to the county crisis stabilization unit if she was feeling overwhelmed by the confrontation with her son.

“I just want him to get help,” the woman said. “He needs medication. He needs something. I can’t take it no more. I’m at my wit’s end.”

Alvarado assured her they would place her son on another 72-hour hold at the local emergency room for evaluation, and that he would recommend the man be transferred to a facility for longer-term treatment.

“We don’t really have the final say,” Alvarado said. “But I also work there, so I’ll make sure, when they ask me, ‘What do you think?,’ I’m definitely going to tell them.” 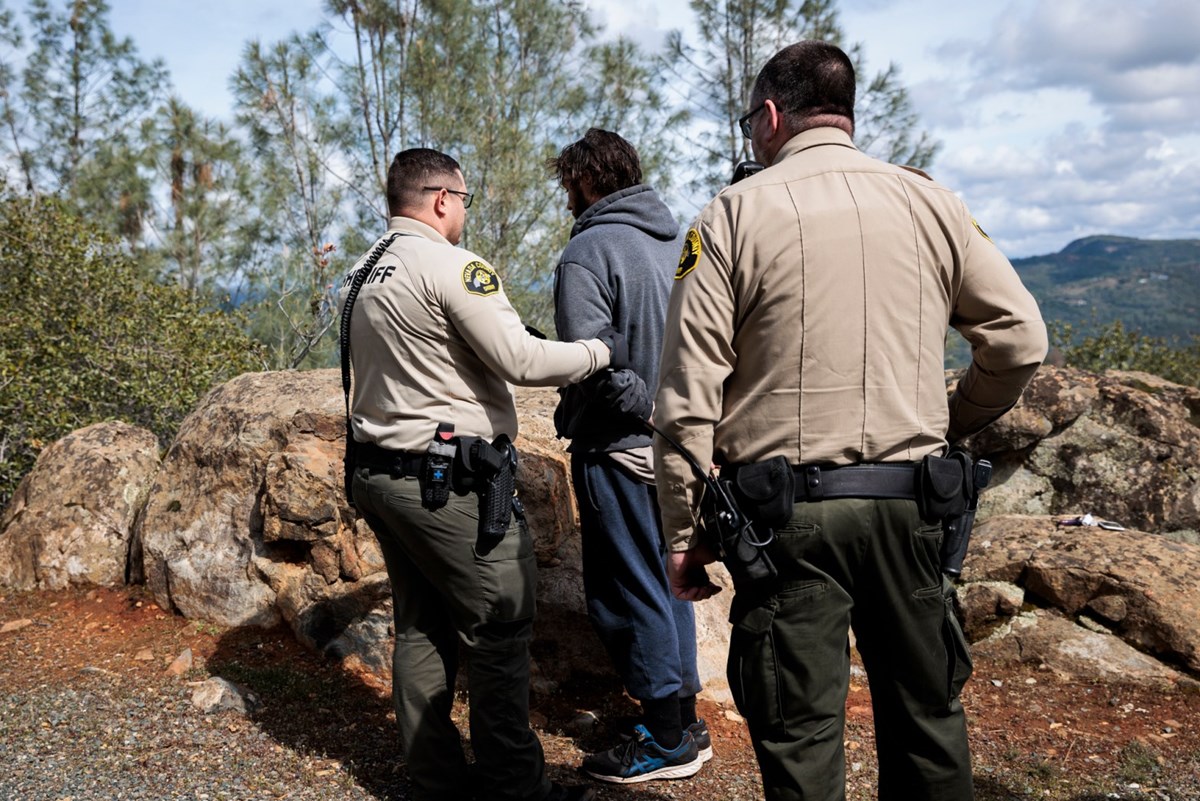 The Nevada County Sheriff’s Office is among the wave of law enforcement agencies across California and the country rethinking how they handle mental health-related calls.

As the national reckoning over use of excessive force and the death of unarmed civilians gained steam during the past decade, demands also grew for communities to reconsider their approach to the personal crises — severe mental illness, homelessness, substance abuse — underlying so many 911 calls, arrests and, sometimes, fatal encounters with police. The debate was supercharged in the summer of 2020, following the murder of George Floyd and mass protests over policing practices, with many activists urging that law enforcement be removed from non-emergency response altogether.

Since then, new programs pairing law enforcement officers with behavioral health clinicians as patrol teams have popped up throughout California, including in San Mateo County, Pleasanton, Palo Alto, Santa Maria, Sacramento County, Humboldt County and Modesto. The Los Angeles Police Department expanded its decades-old mental health unit and moved it from a secondary to frontline response.

Supporters have promoted this strategy as a way to bring more sensitivity and care to some of the toughest, most time-consuming 911 calls, while freeing up officers to focus on their primary crime prevention duties.

To succeed, however, these efforts will need to rebuild trust between law enforcement and residents who led the push for change, often skeptical that the solution could come from police.

That is the case even in a place like Nevada County — overwhelmingly white, politically moderate, where law enforcement officials say they feel strong support. Pockets of anger and doubt linger over the February 2021 killing of Sage Crawford. Sheriff’s deputies shot Crawford, who was walking down a road with her two young children, after she accused the officers of trying to take her kids and charged one with a knife. The mobile crisis team was off-duty at the time. 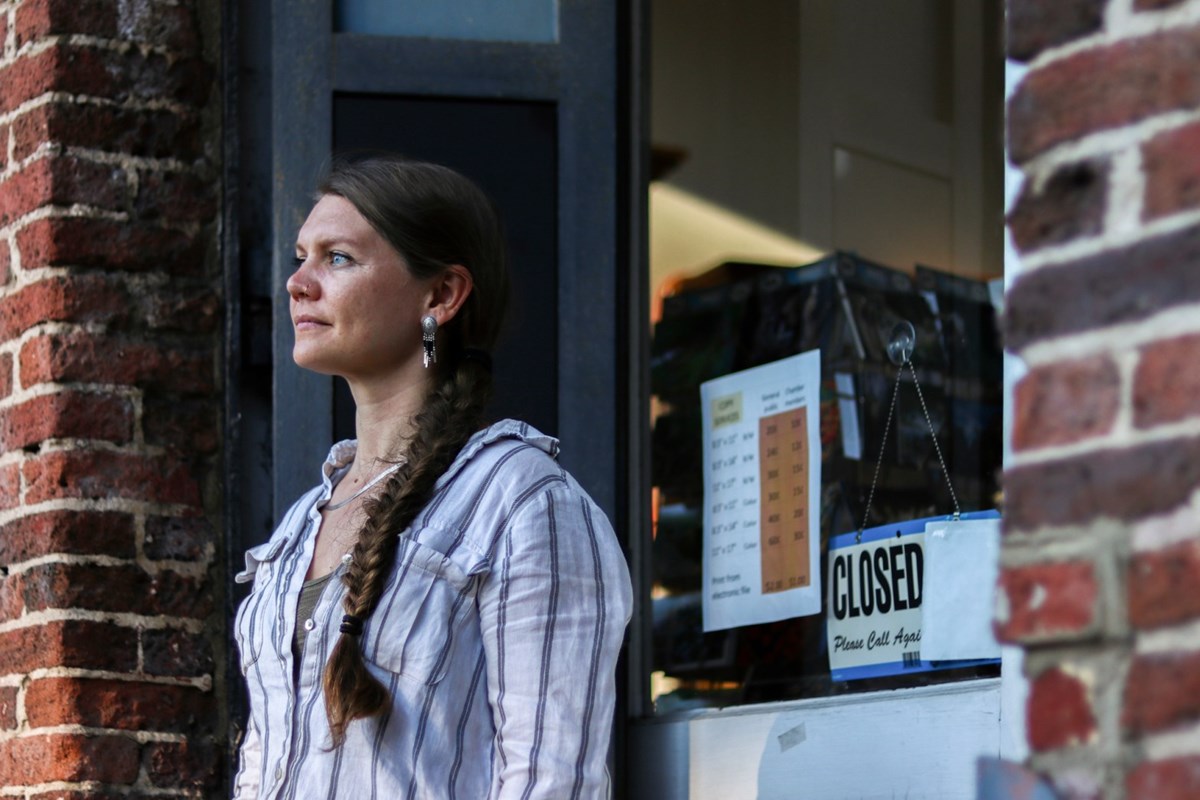 A community group formed last year following Crawford’s death. It’s now working to establish a volunteer-run hotline that could supplement and potentially provide an alternative to the sheriff’s team for mental health crises and homeless people in distress, situations that its leaders argue are exacerbated when someone shows up with a badge and a gun.

“It will just automatically escalate the situation,” said Libby Woods, an educator in Nevada City who spearheaded the project. “It’s all hands on deck to save people’s lives.”

Though the mobile crisis team launched just a few months after nationwide protests over police brutality reached all the way to tiny Nevada City, the county seat, Sheriff Shannan Moon said she developed the program entirely separate from the social justice movement.

Her interest began while working in crisis negotiations, which proved to her the value of taking time to talk to people in distress, according to Moon, a 32-year veteran of the department.

She led the investigation of the 2001 shooting spree in which a Nevada County man — who was unhappy with the services he received through the behavioral health department — killed three people, including 19-year-old receptionist Laura Wilcox. Her death prompted the Legislature to pass Laura’s Law the following year, allowing for court-ordered outpatient treatment in Nevada and about two dozen other counties that have since adopted the measure.

After she was elected the county’s first female sheriff in 2018, Moon drew inspiration from a team in San Diego County that pairs law enforcement and mental health clinicians to respond to psychiatric emergencies, which was run by someone she knew.

Moon originally saw the mobile crisis team as an opportunity for greater efficiency in a small office spread thin across the nearly 1,000 square miles of this largely rural county of 100,000 people about an hour northeast of Sacramento. Putting a social worker in the field could save time for deputies who encounter someone in a mental health crisis and must make a judgment call about whether to transport them to the emergency room for a formal evaluation. The team could also more directly connect people to services, rather than simply moving on if they did not meet the criteria for a psychiatric hold.

“People don’t think clearly in crisis,” Moon said in an interview at the sheriff’s office. “When you have the opportunity to slow down, you are able to come to a really good dialogue about what’s best for someone, and get someone to calm down and really look out for their best interest. But they have to be able to trust you to do that. And that trust is built on that conversation. It’s all about the conversation.”

The first team was formed in October 2020 and a second was added last November. The two now split the week, working either three or four 12-hour days, from 7 a.m. to 7 p.m., responding to issues such as suicide threats, psychotic breaks and drug use.

One recent case involved a homeless man who threatened to kill himself because his dog had been taken and he couldn’t afford to get it out of the shelter. Alvarado, the clinician on the team, said he contacted the county homeless outreach program, which paid the shelter bill for the man’s dog and then set him up with a caseworker.

Alvarado — who has two decades of social work experience with child welfare, adult protective services, homeless youth and behavioral health — said his goal is to find an outcome that allows a person to remain in the least restrictive environment. While someone that he and Spittler assess to be a danger to themselves or others can be detained for psychiatric evaluation, more than 70% are not. Most calls are resolved with a “safety plan,” a verbal agreement with the person that might involve seeking help from family, their therapist or other services in the community.

“We go into every…situation making sure that we both feel comfortable walking away,” Alvarado said. “And then we walk away, what do we have to do to ensure that this person is going to continue to be safe? That takes a lot of energy.”

That means that for the vast majority of people they encounter, Spittler said, “we didn’t further traumatize to be able to get them the help that they needed.”

‘We are the fixers’

On a sunny Tuesday in March, Spittler drove Alvarado around the expansive backroads of western Nevada County over the course of their 12-hour shift, a soundtrack of hard rock occasionally keeping them company. Spittler frequently checked a computer terminal next to his seat for details on calls for service to determine whether they should respond: “We get really good at triple-tasking while we’re driving,” he said.

Alvarado’s bulletproof vest sat upright in the backseat of the truck like another passenger. Though Spittler is required by the department to wear his vest at all times, Alvarado tries to avoid it on most calls to draw a distinction between his role and that of law enforcement — and also, he says, because he doesn’t want to look like a “poser.” 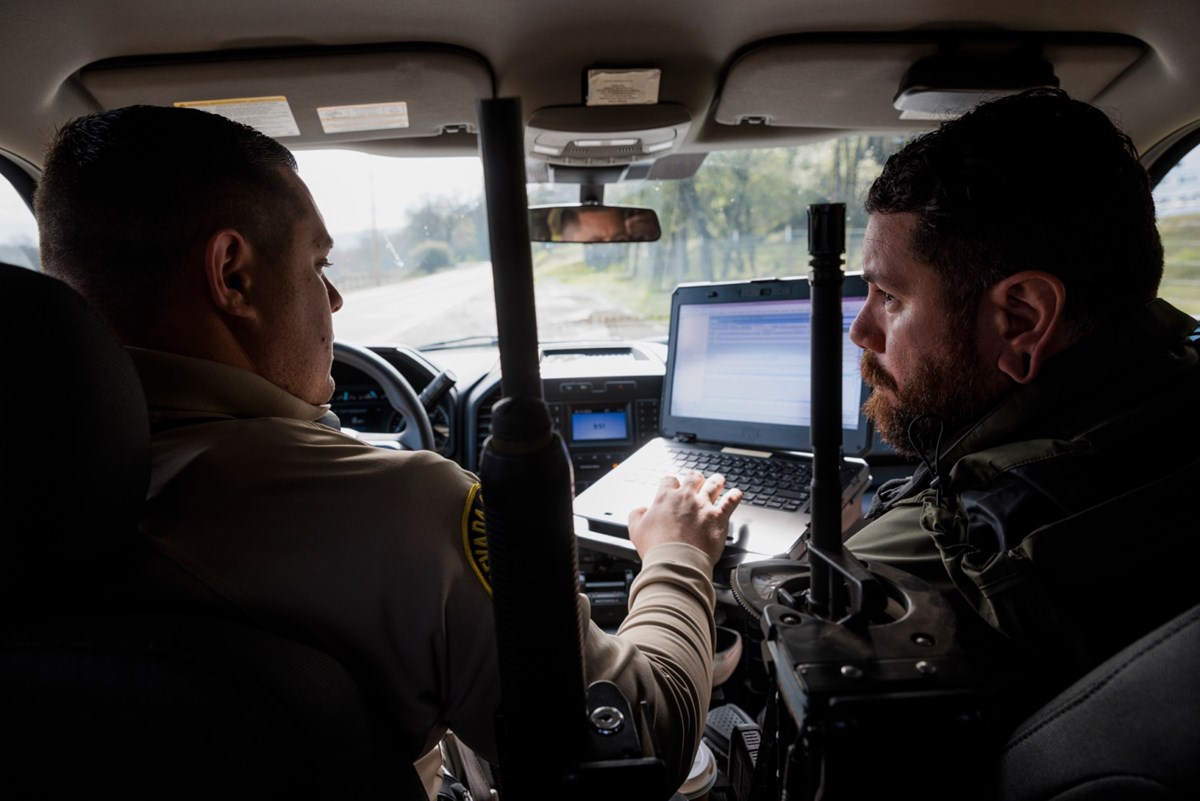 Late in the morning, a colleague called the mobile crisis team for backup to check on a woman with a broken wrist. Though her medical provider suspected potential domestic violence, the sheriff’s department already knew the woman, who had recently been calling 911 to falsely accuse people of sexually abusing animals and filming child pornography on her property. Her children had told deputies it was likely due to a growing brain tumor.

Like other residents the mobile crisis team dealt with that day, CalMatters is not naming the woman to protect her privacy.

While Spittler and the other deputy pulled the woman aside to ask about her wrist, Alvarado spoke to her partner, who towered in the door frame, snacking on a handful of nuts. Alvarado suggested that he try to reassure the woman when she told him she was seeing things outside, rather than walking away and shaking his head.

“She’s probably scared, you know? Because she thinks she’s seeing someone. That would be pretty frightening,” Alvarado said. “So maybe just say, like, ‘Well, okay, maybe just stay inside with me and I’ll keep you safe.’ Something simple like that.”

Alvarado asked if the woman was enrolled in Medi-Cal, the health insurance program for poor, elderly and disabled Californians. Because she was, he promised to refer her to the in-home supportive services program to get more help caring for her at home.

“She’s gonna fight it,” her partner said. “She’s in denial. She honestly believes she sees these people.” 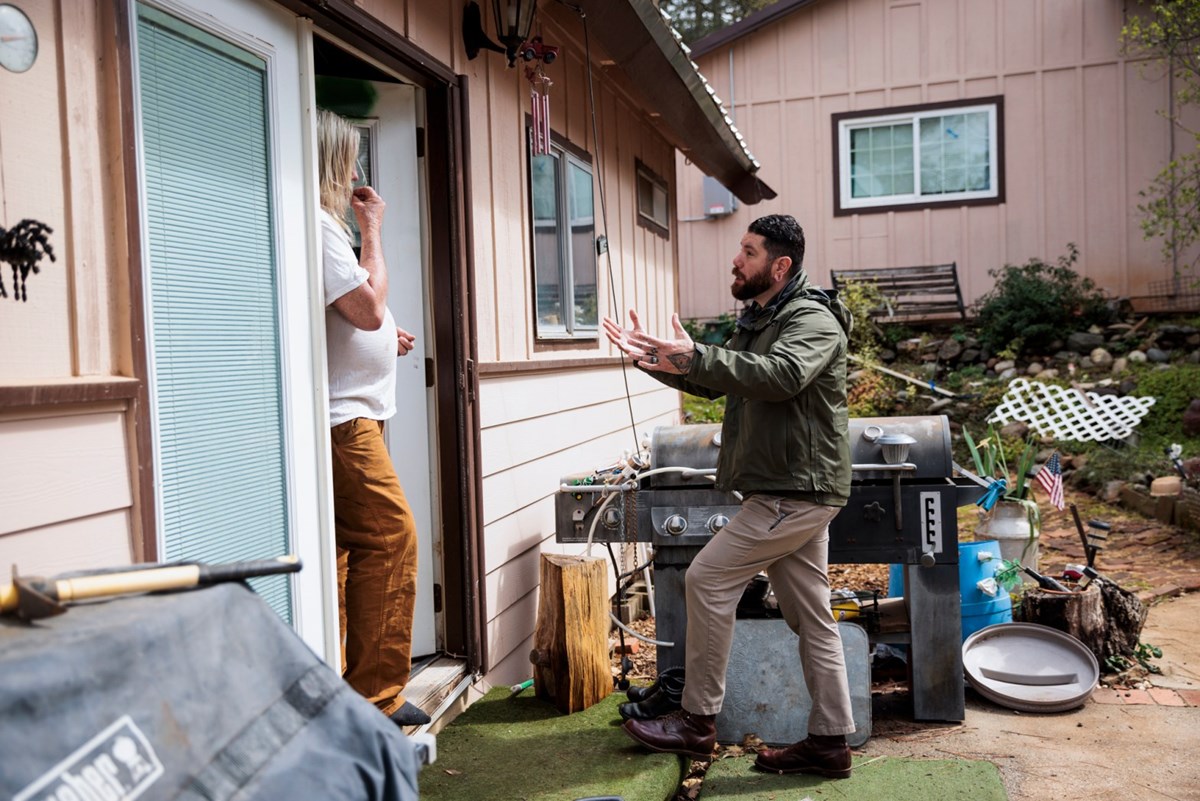 Ernesto Alvarado talks to a man about his partner’s mental health struggles while on patrol in Penn Valley on March 15, 2022.Max Whittaker / CalMatters
Follow us for more stories like this