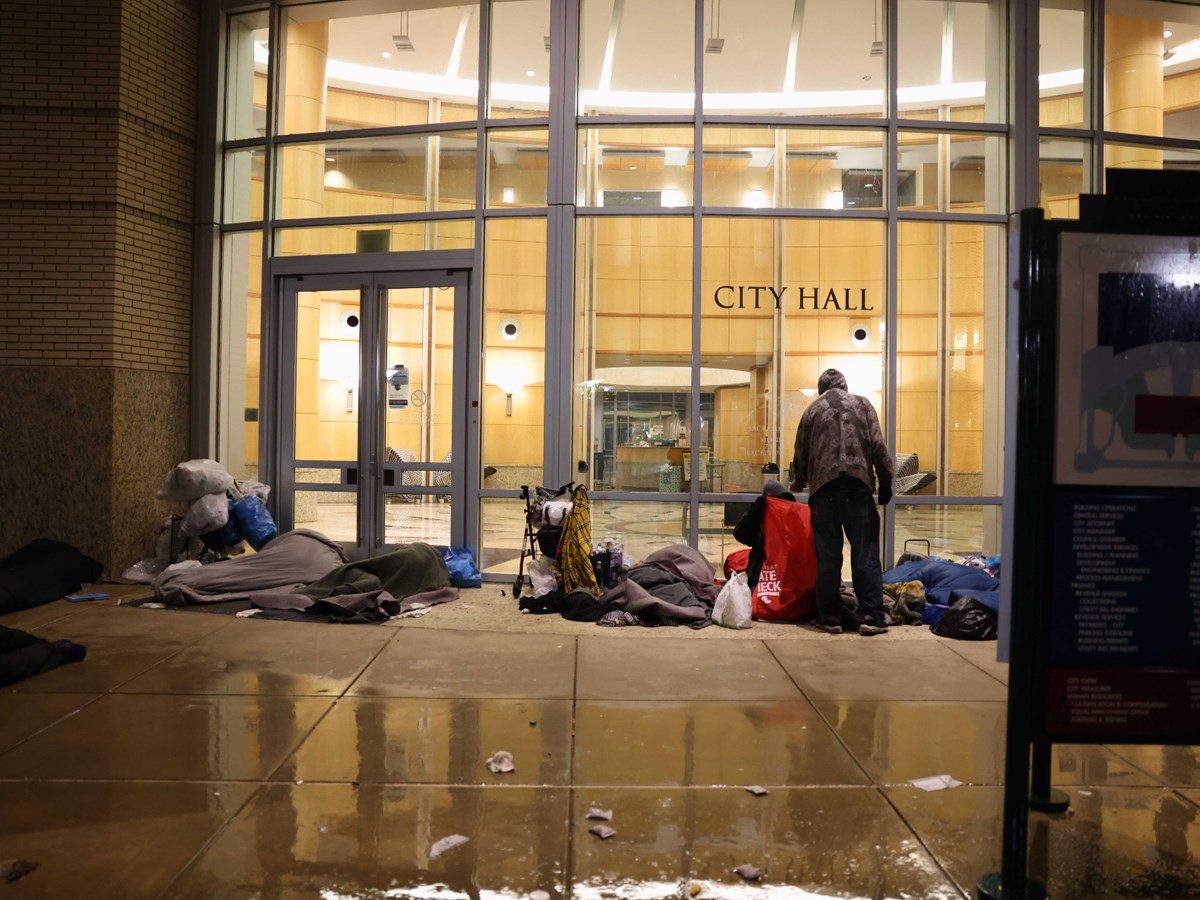 People attempting to shelter outside City Hall on Dec. 13, 2021.

The city’s emergency respite centers will be located at:

In addition, the Union Gospel Mission is operating its winter warming center every night from 10 p.m. to 5 a.m. at 400 Bannon Street, according to the city.

The city-operated shelters will provide snacks, water and restrooms. They have covered outdoor space that can accommodate pets in kennels or crates, according to city officials.

“The City will review the weather forecast later this week and determine if the respite centers should be extended into Sunday night,” a city news release said. “The Department of Community Response is also working with community partners to identify additional locations that could be used as temporary respite centers.”

Protective facial coverings will be required and provided to all visitors, according to the county. Pets are welcome, but must be on a leash or contained in an animal carrier at all times. Blankets, snacks and water will be provided.

Passenger pick-up locations will be at the following RT bus stops:

Bus pick-ups start at 7 p.m. each night and will run until 11 p.m., though there is no set schedule for each stop, according to a county spokesperson.

In addition to the warming location, the county has extended a program that provides motel vouchers to people experiencing homelessness during severe weather. That program is currently sheltering 120 people and more people are being added as capacity allows, the county said.

The city of Elk Grove is also opening a warming center:

Pets are not permitted at the Elk Grove warming center, which is open to people 18 and older. Families with children will be referred to a motel voucher program, according to a news release.

People can call 211 to get the latest information on warming center locations, dates and times.

In March, Mayor Darrell Steinberg and City Council approved $3 million to fund the overnight walk-in centers year-round, marking what many believed would be the end of the city’s long reliance on weather-based thresholds to open the small emergency shelters

The vote came after several unhoused people died in a violent January storm.

But instead of opening year-round facilities, officials have opened the respite centers sporadically, often based on temperature thresholds..

City officials have blamed the infrequent openings on a lack of staff trained to work at overnight shelters. Gregg Fishman, a spokesperson for the Sacramento Department of Community Response (DCR), which oversees the city’s homeless services, said the agency has only 10 or 12 people who can work at the facilities, noting they also have day jobs.

Fishman added that the City Council will consider a proposal next week to contract with the nonprofit Hope Cooperative to provide staffing at respite centers in the future.

In the meantime, the National Weather Service expects “near to below freezing overnight and morning temperatures” in the Sacramento Valley and foothills this week.

Near to below freezing overnight and morning temperatures are expected in the Valley and foothills this week, starting tonight. Be sure to protect your people, pets, plants, and pipes! #CAwx pic.twitter.com/aSPNyvCmkj

Nearly two inches of rain have fallen in Sacramento over the past week, according to the weather service. Some foothill communities saw triple those totals.

Widespread rain fell over Northern California over the past 7 days. Here is a look at some totals courtesy of @NWSCNRFC. Showers will continue through tomorrow. Give yourself extra time to reach your destination! #CAwx #CArain pic.twitter.com/vjJvQ4GFO8

With water releases increasing from Folsom Dam this week, DCR warned homeless residents camping along the American River to move to higher ground.

“After two years of drought, some folks may be camping too close. Help spread the word,” the agency wrote on Twitter.

Release from #FolsomDam increasing from 1,750 to 5,000 CFS on Thurs. am. American River levels will rise a little. After two years of drought, some folks may be camping too close. Help spread the word. https://t.co/QG0MqHNgcE

Sacramento has several year-round shelters for homeless residents, but all 1,100 beds are typically full.

The city refused to open any emergency warming centers in mid-December as unhoused people tried to stay dry and warm during a rainstorm. After backlash from advocates and internal push from the mayor, officials opened the City Hall lobby on the second night of the rainstorm.

Advocates for Sacramento’s homeless community have urged city and county leaders to open permanent respite centers and improve outreach about them.

The lack of shelter is one reason for the increase in deaths among unhoused people in recent years, advocates say. Drugs and alcohol, accidents, suicides and exposure to the cold, along with other causes, led to the deaths of 137 homeless people in Sacramento County last year, according to a report published by an advocacy group in September and based on coroner’s data.

Several cold and wet storms have hit Sacramento so far this month. Ten unhoused people died in the county from Dec. 1 through Dec. 16, according to preliminary information provided on Friday by Sacramento County Coroner Kimberly Gin.

Five were living outdoors at the time of their death and three in vehicles. Two died at hospitals. No determination had been made about the cause of deaths, the coroner said. She added that her office believes all 10 were unhoused, but “we sometimes find that the person was not actually homeless so these numbers are subject to change.”

Mayor Steinberg said last week this week plans for a year-round respite center are in the works, but did not specify when or where it would open.

Fishman said this week that several sites are under consideration but there are no immediate plans to open one.