Americans can wait many weeks to see a therapist. California law aims to fix that. 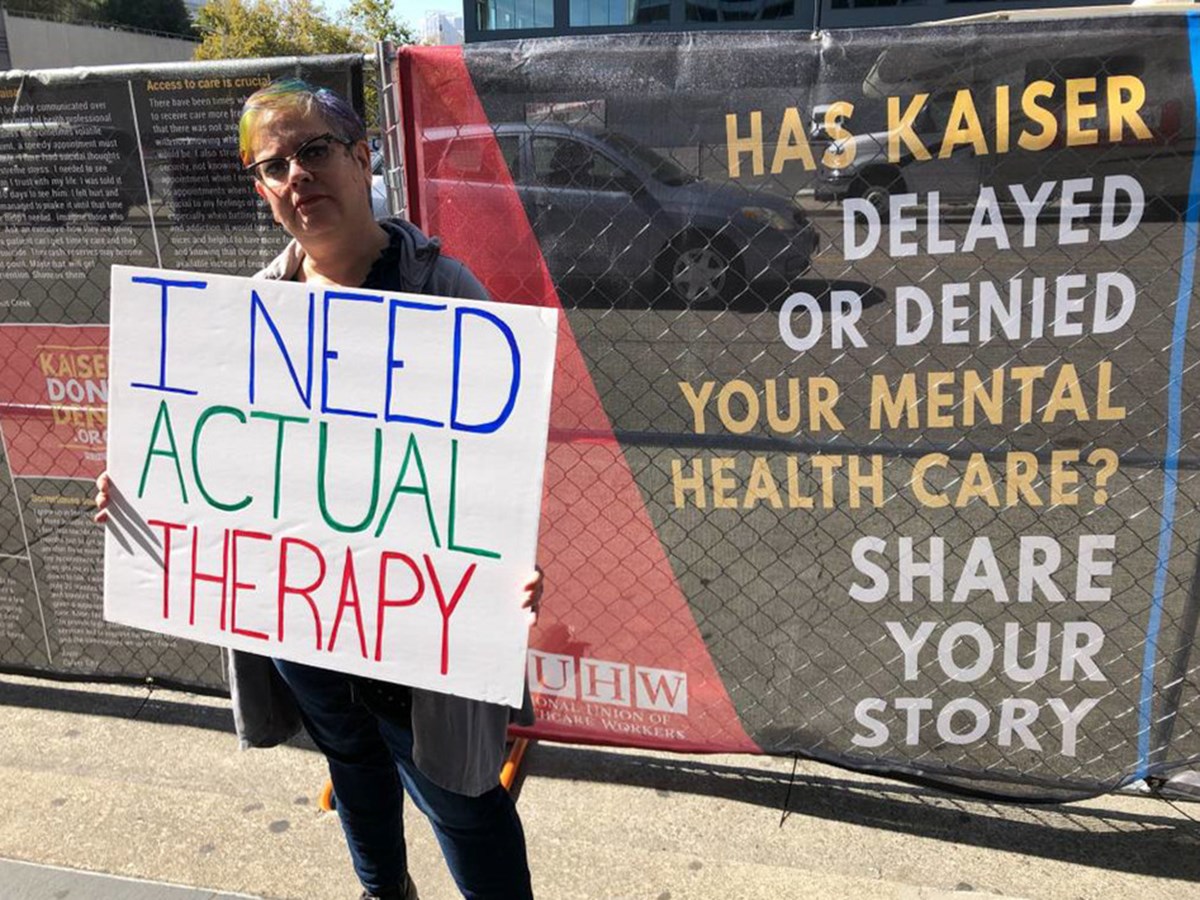 When Greta Christina heard that Kaiser Permanente mental health clinicians were staging a protest on Oct. 13, 2019, over long wait times for therapy, she made her own sign and showed up to support them.

When Greta Christina fell into a deep depression five years ago, she called up her therapist in San Francisco — someone she'd had a great connection with when she needed therapy in the past. And she was delighted to find out that he was now "in network" with her insurance company, meaning she wouldn't have to pay out of pocket anymore to see him.

Then, this summer, Christina was diagnosed with breast cancer. Everything related to her cancer care — her mammogram, biopsy, surgery appointments — happened promptly, like a "well-oiled machine," she says, while her depression care stumbled along.

"It is a hot mess," she says. "I need to be in therapy — I have cancer! And still nothing has changed."

A new law signed by Gov. Gavin Newsom in October aims to fix this problem for Californians. Senate Bill 221, which passed the state Legislature with a nearly unanimous vote, requires health insurers across the state to reduce wait times for mental health care to no more than 10 business days. Six other states have similar laws limiting wait times, including Colorado, Maryland, and Texas.

Long waits for mental health treatment are a nationwide problem, with reports of patients waiting an average of five or six weeks for care in community clinics, at the VA, and in private offices from Maryland to Los Angeles County. Across California, half of residents surveyed said they have to wait too long to see a mental health provider when they need one.

At Kaiser Permanente, the state's largest insurance company, 87% of therapists said weekly appointments were not available to patients who needed them, according to a survey by the National Union of Healthcare Workers, which represents Kaiser's therapists — and was the main sponsor of the legislative bill.

Every day she takes multiple crisis calls from patients who have a therapist assigned to them already, but can't get in to see them, she says, describing the providers' caseloads as "enormous."

"It's heartbreaking. And it eats on me day after day after day," Plumley says. "What Kaiser simply needs to do is hire more clinicians."

But Kaiser says there just aren't enough therapists out there to hire. Kaiser is an integrated system — it is a health provider and insurance company under one umbrella — and it has been struggling to fill 300 job vacancies in clinical behavioral health, according to a statement from Yener Balan, Kaiser's Northern California vice president of behavioral health. Even hiring more clinicians won't solve the problem, Balan says, implying that there will never be enough clinicians to sustain one-on-one therapy for all who want it, in the future: "We all must reimagine our approach to the existing national model of care."

Both Republicans and Democrats backed the California bill

Kaiser lodged concerns about the bill when it was introduced, and the trade group representing insurers throughout the state, the California Association of Health Plans (CAHP), opposed the bill, saying the shortage of therapists would make it too difficult to meet the two-week mandate.

"The COVID-19 pandemic has only exacerbated this workforce shortage, and demand for these services significantly increased," testified CAHP lobbyist Jedd Hampton last spring, during a state Senate hearing for the bill.

Hampton referred to a UCLA study that predicted California would have nearly 30% fewer therapists than needed to meet demand by 2028. "Simply put, mandating increased frequency of appointments, without addressing the underlying workforce shortage, will not lead to increased quality of care."

Lawmakers pushed back and accused insurers of overstating the shortage. State Sen. Connie Leyva, D-Chino, responded by saying the therapeutic providers are out there, but it's the responsibility of insurers to attract them and recruit them into their networks, by paying better rates and reducing administrative burdens.

If insurers want more young people to enter the mental health care profession in the future, they have to improve the salaries and working conditions in the field now, said state Sen. Richard Pan, D-Sacramento. (A 2016 KQED investigation uncovered multiple ways that insurers save money by keeping their provider networks artificially small.)

As bipartisan support for the bill grew in Sacramento, insurers withdrew their formal opposition. The bill passed the Legislature with 111 lawmakers voting for it, and only one voting against.

"COVID, and the fact that every single one of us has been impacted significantly in terms of our isolation, I believe, has made legislators' focus, and their understanding of the importance of treatment, almost universal," said Julie Snyder, government affairs director for the Steinberg Institute, a supporter of the bill.

The reasons behind the long waits are found nationwide

But it's not clear if other states have the political will, or the resources, to legislate a similar solution, says Hemi Tewarson, executive director of the nonpartisan National Academy for State Health Policy in Washington, DC. While California may be able to force insurers to hire more therapists, she said, in places like New Mexico, Montana, Wyoming, and parts of the South, there really aren't enough therapists out there, at any price.

"They don't have the providers, so you could fine the insurers as much as you want, you're not going to be able to, in the short term, make up those wait times if they already exist," she said.

The new California law is a solid step forward toward improving access to mental health care, with communities of color standing to benefit the most, says Lonnie Snowden, professor of health policy and management at UC Berkeley.

African Americans, Asian Americans and Latinos face the most barriers getting into care, Snowden said, and when people of color do come in for treatment, there is a high discontinuation rate.

"So anything you can do to speed up people's future appointments is probably going to disproportionately benefit people who are already staying away because of barriers," Snowden said. "If you can remove one of the barriers, they're the ones who stand to benefit."

But there has to be some form of oversight and enforcement for the new rules to work, said Keith Humphreys, a psychiatry professor at Stanford University. Kaiser has data systems that can track the time between appointments, but other insurers set up contracts with therapists in private practice, who manage their own caseloads and schedules.

"Who would keep track of whether people who've been seen once were seen again in 10 days, when it's hard enough just to keep track of how many providers we have and who they are seeing?" he said. "And if someone wasn't seen again in 10 days, how do we tell the cases when they were denied care they wanted versus the cases where they decided one appointment is all they wanted?"

These are questions that will fall to state regulators, primarily the California Department of Managed Health Care. The department monitors compliance with other timely access standards that are on the books, mainly through self-reports from insurers, and more recently, on-site audits. It has fined insurers $6.9 million since 2013 for violating these standards, including a $4 million penalty against Kaiser for excessive mental health wait times.

Previous state law required insurers to provide initial mental health appointments within 10 days - the new law clarifies that they must do the same for follow-up appointments.

Greta Christina, who gets her care at a Kaiser facility, says she is desperate for the new law to start working. It goes into effect on July 1, 2022. She thought about paying out of pocket in the meantime, to find a therapist she could see more often. But in the middle of a cancer crisis, she says, it was too hard to think of starting over with someone new.

"Knowing that this bill is on the horizon has been helping me hang on," she said.

This story was produced as part of NPR's health reporting partnership with KQED and Kaiser Health News (KHN). KHN is not affiliated with Kaiser Permanente.