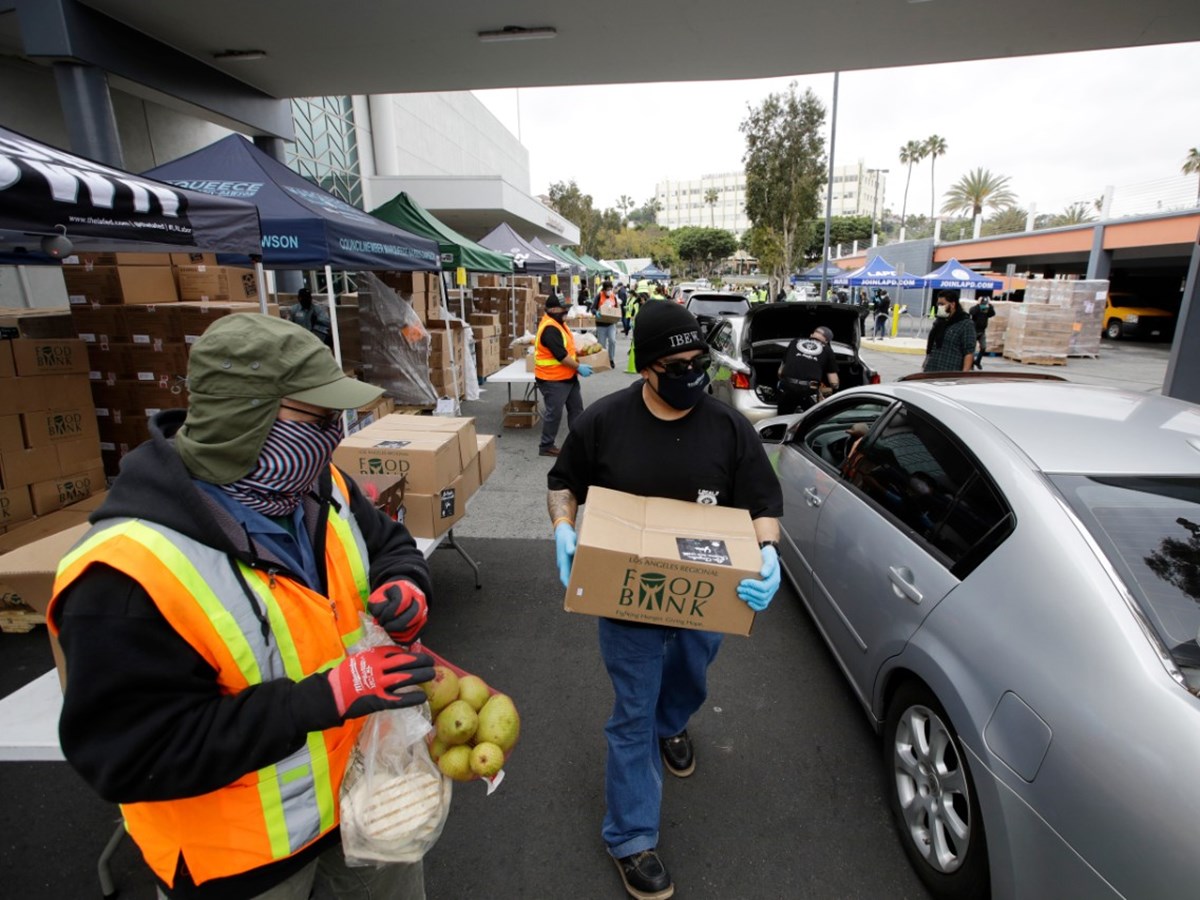 Volunteers load up vehicles at a food distribution center Friday, April 17, 2020, in the Crenshaw district of Los Angeles. Food banks in the state have seen a spike in numbers as the state's unemployment level has jumped to to 5.3% for March.

Seven in 10 Californians say the gap between rich and poor is getting larger, according to a statewide survey released Tuesday.

The survey, conducted last month by the nonpartisan think tank, Public Policy Institute of California, polled 2,292 adult Californians about their opinions on the state’s economic outlook, financial security, job security, among other topics.

“Solid majorities of Californians say the gap between rich and poor in their region is increasing and that children growing up in California today will be worse off than their parents,” said Mark Baldassare, PPIC president and CEO.

Overall, Californians have mixed views of the state’s economic outlook for the next 12 months. About 47% said they think good times are ahead, while 52% say they foresee bad times. Taking a closer look at racial/ethnic groups, a majority of Latinos (57%) and Black Americans (54%) say good times are ahead, compared to about four in 10 Asian Americans (43%) and whites (39%).

Half of residents in Los Angeles and the San Francisco Bay Area are optimistic, while majorities in the Central Valley, the Inland Empire, and Orange/San Diego are pessimistic.

About 64% of survey respondents say they think inequality will be larger by the year 2030.

Californians share their views on employment, education, and financial security

About 16% of Californians say they or someone in their household has received food from a food bank in the past year, and 27% received unemployment benefits.

Those making less than $20,000 per year are nearly three times more likely than those making $80,000 or more to say they are worse off.

More than one in four Californians say they or someone in their household has had their work hours reduced or pay cut, or 28%, and about two in 10 know someone who lost their job in the past 12 months, while nearly half — about 49% — have worked from home.

Most Californians polled said the availability of well-paying jobs is a problem in their part of the state, and 22% consider it a big problem. Residents in the Inland Empire and Orange/San Diego are slightly more likely to say this is a big problem than those in other regions.

Still, not everyone feels this way.

“About one in five residents say the lack of well-paying jobs in their region is a big problem and is making them seriously consider moving out of state,” Baldassare said.

More than one in four Californians, or 27%, worry daily or almost every day about saving for retirement and the cost of housing. Two in 10 Californians worry about the amount of debt they have, and 19% worry about health care costs for them and their family.

The survey also asked questions about how Californians feel about worker organization. About eight in 10 adults completely (43%) or somewhat (38%) agree with the idea that it is important for workers to organize so that employers do not take advantage of them.

While workers across the state participated in strikes during October, recent reporting by CalMatters found that few of California’s working poor get the chance to vote on unions.

Survey results show that an overwhelming majority of Californians support expanding safety net programs. About seven in 10 adults, or 72% and 71% of likely voters, favor expanding eligibility and payments of the earned income tax credit for lower-income working families and individuals.

At the state and local levels, many groups have been advocating for the permanent extension of the child tax credit.

There were several questions related to workplace benefits and training support.

More than eight in 10 adults and likely voters favor increasing government funding for job training programs; solid majorities across partisan groups and regions favor this increase so that more workers have the skills they need for today’s jobs.

Support for these programs varies depending on racial/ethnic and ideological lines. Democrats and independents largely support these policies, while majorities of Republicans oppose both. Across racial/ethnic groups, whites are the least likely to support these policies, though nearly half are in favor. Support is lowest among college graduates, those 55 and older, and those with incomes of $80,000 or more.

About three in four support the government offering a Medicare-like health insurance plan, where Americans can purchase instead of private insurance. An overwhelming majority of Californians, or 76%, favor increasing government funding to make childcare programs available for more lower-income working parents.

Melissa Montalvo is a reporter with The Fresno Bee and a Report for America corps member. This article is part of The California Divide, a collaboration among newsrooms examining income inequity and economic survival in California.