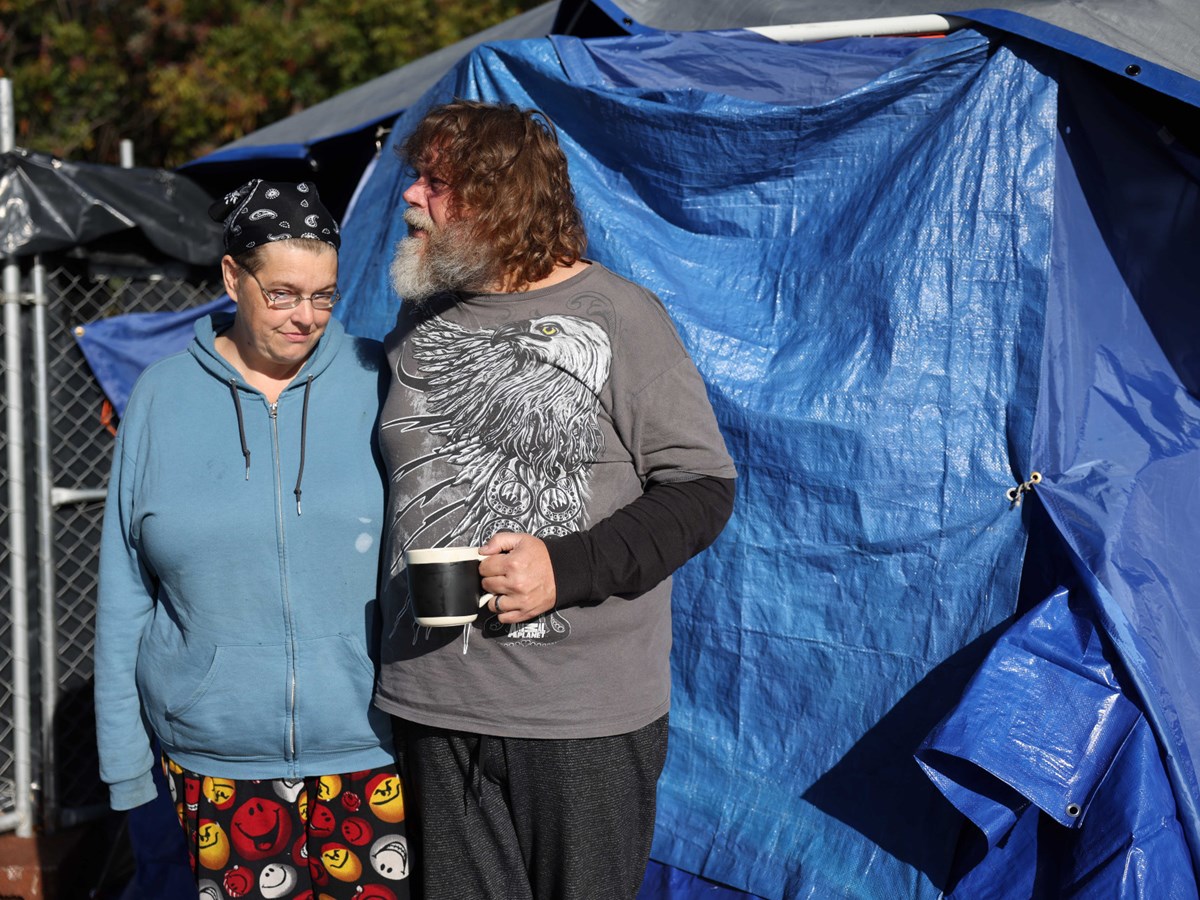 Kirsten and Chris Bolles rode out this weekend’s historic storm at the city of Sacramento’s designated Safe Ground Campsite near the W-X freeway.

Kirsten and Chris Bolles had a couple minutes of levity Sunday night.

After they strapped down their reinforced tent in the shadows of the downtown W-X freeway, narrowly escaping the storm that brought record rainfall to Sacramento, Kirsten pulled her phone out to check on the overnight weather conditions.

“The first thing that popped up on my phone was the notification for a news article that the [Ironman Triathlon] had been canceled due to weather,” she said, then laughed. “I had just finished ringing out my coat.”

She considered the irony: One of the most grueling races on the planet was called off because of the same storm they’d have to survive while living outdoors in a thin-walled plastic tent near a freeway.

In a series of three storms last week, Sacramento was hit with a historic amount of rain, which culminated with a record 5.44 inches of downpour on Sunday. 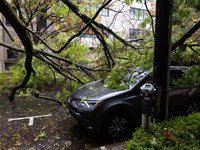 But some unhoused residents say they didn’t get sufficient notice of the storm’s seriousness or that Sacramento had opened emergency shelter options. Others say it’s not easy to travel to the shelters, or that they couldn’t leave behind their belongings.

As the storm raged on Sunday, Kirsten and Chris buckled down with dozens of others at the city’s designated Safe Ground Campsite, hoping that all of their belongings would make it unscathed. But over the course of three days, the elements took a toll. 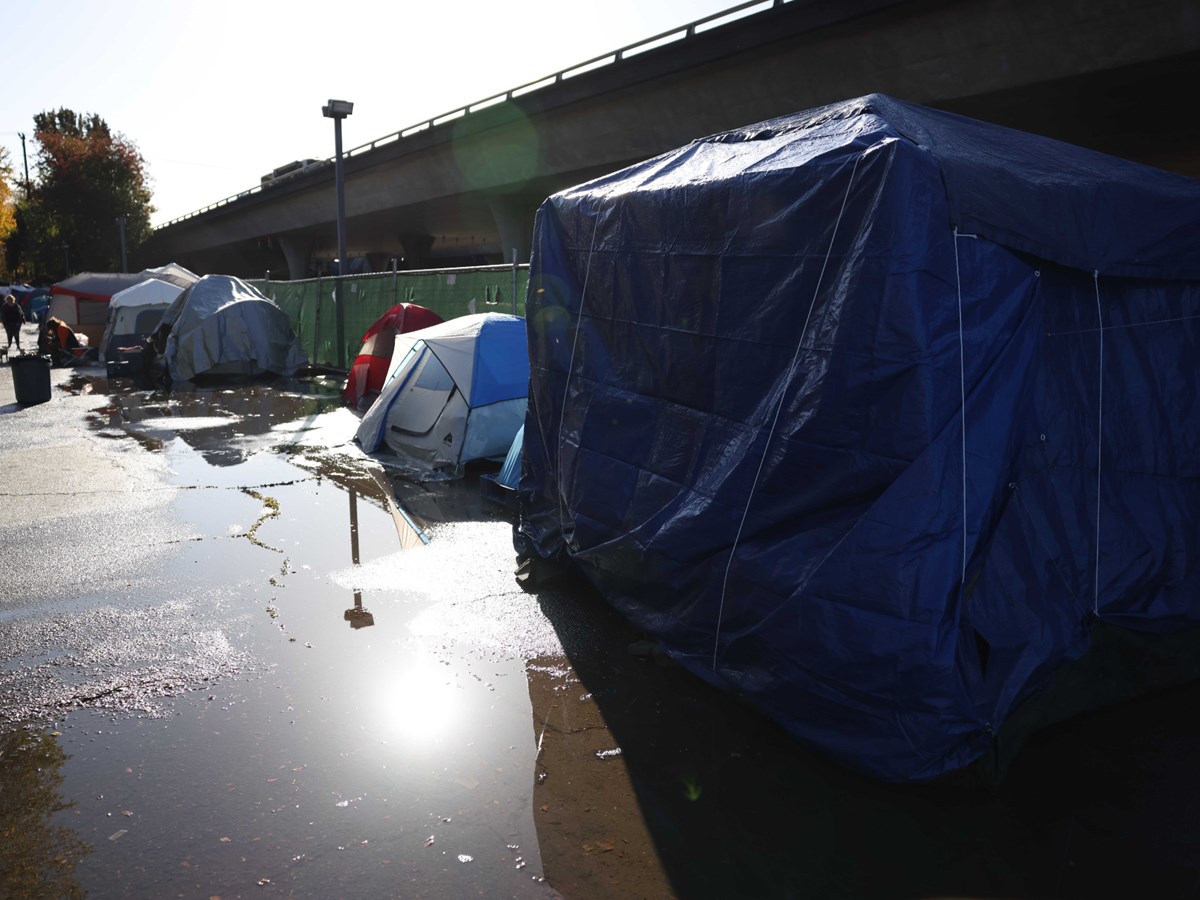 Tents at the city of Sacramento's designated Safe Ground Campsite Monday, Oct. 25, 2021, the day after a record-breaking storm hit the city.Andrew Nixon / CapRadio

There was flooding at the campsite, with waters nearly reaching Chris’ ankles, he said. Because they were located directly beneath a freeway, vehicles above them splashed water on their tents. Tree branches snapped off, missing a nearby fence that separated them from cars speeding down W Street.

“Our entire existence is putting out fires right now — exterminating problems and catastrophe,” Chris said of the experience through tears. “You can't ever get ahead at that point.”

Their shelter survived. But not all tents stayed above ground. On the city’s north side, several campers along the Sacramento River near Railroad Drive had tents partially or completely submerged, like the one Joyce Williams owned.

“Now we have to start from scratch and try to salvage what we have inside of our tent,” she said. Her neighbor wasn’t as lucky; Williams said the neighbor lost everything.

Farther north, several unhoused residents had to be rescued near Bannon Creek when the water suddenly overwhelmed their campsite. 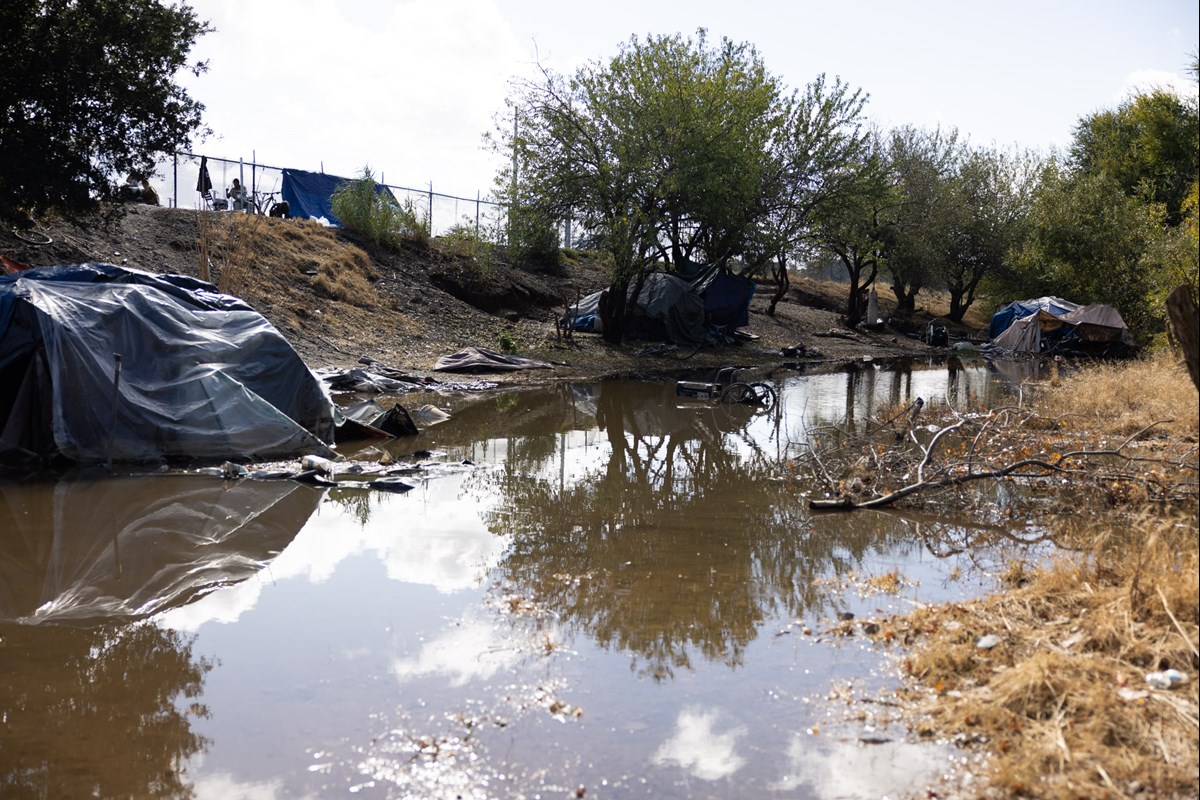 In anticipation of the storm, the city and county opened four overnight respite centers: the City Hall lobby, the Hagginwood Community Center in north Sacramento and the lobbies of two County Department of Human Assistance centers, one in Midtown on 28th Street and another in South Sacramento on Florin Road.

But the centers weren’t announced until less than 48 hours before the rains arrived.

The City Hall lobby, which was made public as a respite center on Friday night, saw 150 people over two days, according to Gregg Fishman with the city’s Department of Community Response.

“Some of them were camping outside under the overhangs and just coming in to use the restrooms, grab a snack or get some water,” he said. “At any given time, we probably had about 60 people staying in the lobby.”

On Sunday afternoon, as the storm’s heavy rain pummeled the region, the city Tweeted that the City Hall center was close to capacity.

But it was an anomaly. The other three centers were near-empty, mirroring the lack of people using the cooling centers the city opened this past summer.

Tim Souda, who works security at the Hagginwood Community Center, said there were 10 people Sunday night. At 28th Street, there were 25 people, according to Janna Haynes, spokesperson for Sacramento County.

And in the Florin Road center, there were more dogs than people — six dogs to four, Haynes said.

Kirsten and Chris decided not to go to the respite centers because they didn’t want to chance getting split up or leaving their belongings behind. Plus, they were concerned about transportation.

“Nobody I’ve seen when they're talking about siting or services or access to services is talking about how people are going to get to those services,” Kirsten said.

Robert Bork stayed the night in the lobby of the 28th Street building. When the rain started, he was still sleeping under a tarp, but all his clothes and his blanket were soaked.

“In fact, my backpack, where I have my clothes, is still wet,” he said.

He made it to the center through a stroke of luck: After his belongings were drenched, he said he ended up in the hospital for emphysema. When they gave him an inhaler and released him, Bork was at a bus stop when DHA staff at the center found him and wheeled him to shelter.

“They gave me a couple of blankets and kept me nice and warm and comfortable,” he said.

Other unhoused people — like Joyce Williams and her wife, Sharon Jones — knew of the centers but chose not to go, citing an unwillingness to leave their belongings and hesitance based on people’s previous experiences.

“You have to give up everything to go — your rights, everything to go into those,” Jones said. “I watched the [triage shelter at Railroad Drive]. The whole time, they had to shelter here, and the people that got help in there are back out here.” 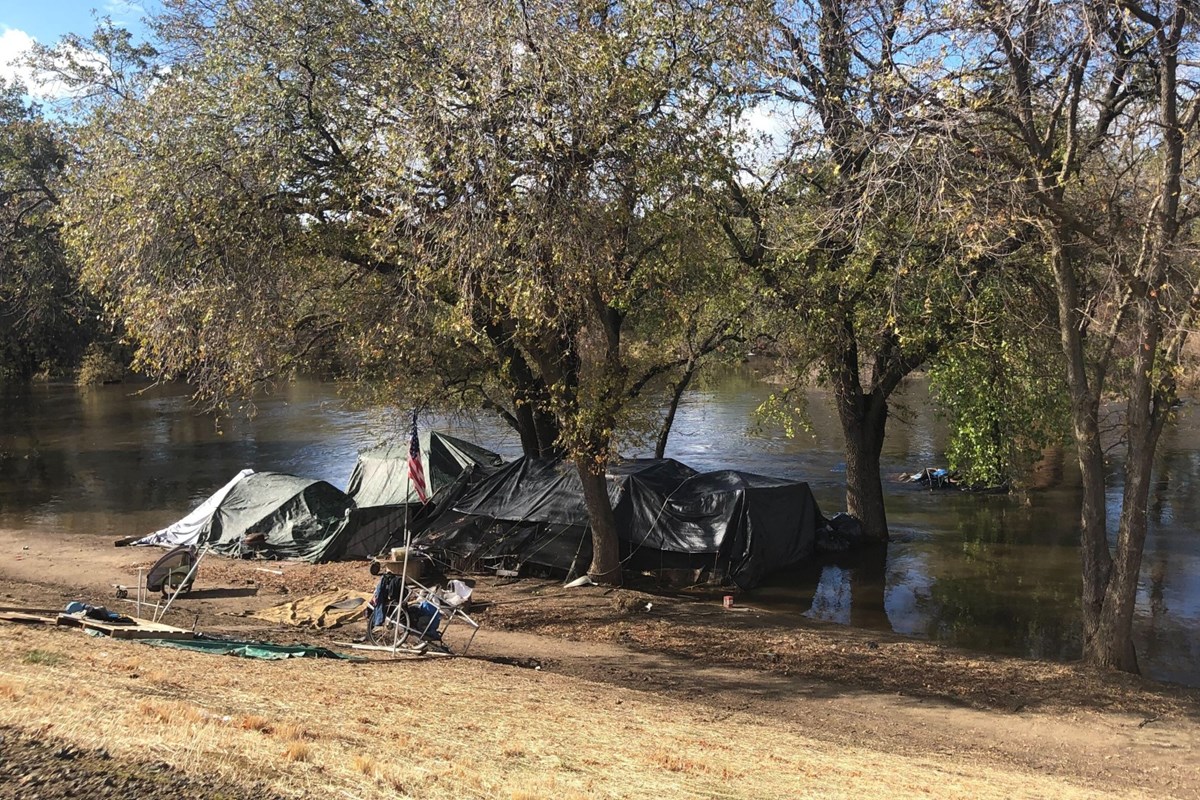 Water seeped into part of Joyce Williams and Sharon Jones’ tent along the Sacramento River on Sunday night.Janelle Salanga / CapRadio

The city and county say many people who enter shelters do move on to permanent housing, and some of the respite centers mentioned during this weekend’s storm allowed pets and dogs — on leashes — a policy that wasn’t always the case for emergency shelters.

Aside from the respite centers, city workers stayed busy throughout the night. The Sacramento Fire Department said it rescued dozens of people from flooded waters. Workers with the city’s emergency services delivered water bottles to City Hall. Others dropped off cots to campers at the W/X freeway, transported unhoused people to higher ground and also took some people to shelters.

Fishman, with the city, said that they tried to inform unhoused people shelters and the severity of the storm not just via news release, but by a strong social media push.

“There’s a solid network of advocates for homeless people, and we work with them to get the word out,” he said.

He added that there were some cases when people talked to unhoused folks and said, “Consider moving to higher ground.”

Not knowing whether they would open respite centers until Friday evening hampered the amount of outreach that could be done, Fishman said.

Sacramento County’s Department of Human Assistance, beginning Thursday, said in a press release on Thursday that homeless outreach partners would be issuing motel vouchers to unsheltered people. There was no clarification about where vouchers could be picked up or who would be distributing them.

But Jones argued that the city and county should’ve done a better job at warning unhoused people about the storm.

“Some people have phones and some people don’t,” Jones said. “We didn’t know if [the storms] were that bad until an hour or so before it was happening.”

Williams and Jones said what they really need from the city is a home, instead of temporary measures like the centers.

“We both have income, and we just can’t get permanent housing,” Williams said. “We can take it from there. I don’t want a hand-out, I want a hand up.” 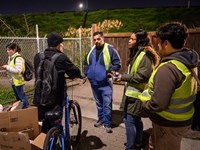 The city says its Comprehensive Siting Plan could lead to more housing for 3,600 people, but Jones worries that the plan will come with more enforcement of anti-camping laws.

“We are people, too, and we count, and they can’t categorize us all into one group or another group — everyone has a reason why they’re out here,” she said.

Now that the storm has passed, other groups are providing aid to unhoused people, including the Sacramento Homeless Union and Sac Red Meals. Both groups have been soliciting donations of tents, tarps, food, supplies and warm clothing.

The Sacramento Homeless Union is also running an emergency supply drive to help unhoused people recover from the storm’s impact on their belongings.