The city said the triage component is key. The center is staffed with people to identify the problems that are keeping homeless people on the streets.

The shelter, which is in an industrial complex on Railroad Drive off of Del Paso Boulevard, is open 24 hours a day. Two hundred homeless people will call it home for the next four months.

Mary Buck was one of several homeless people who had been living in a camp right across the street from the new shelter. She said she's grateful the city included a place for her dog. 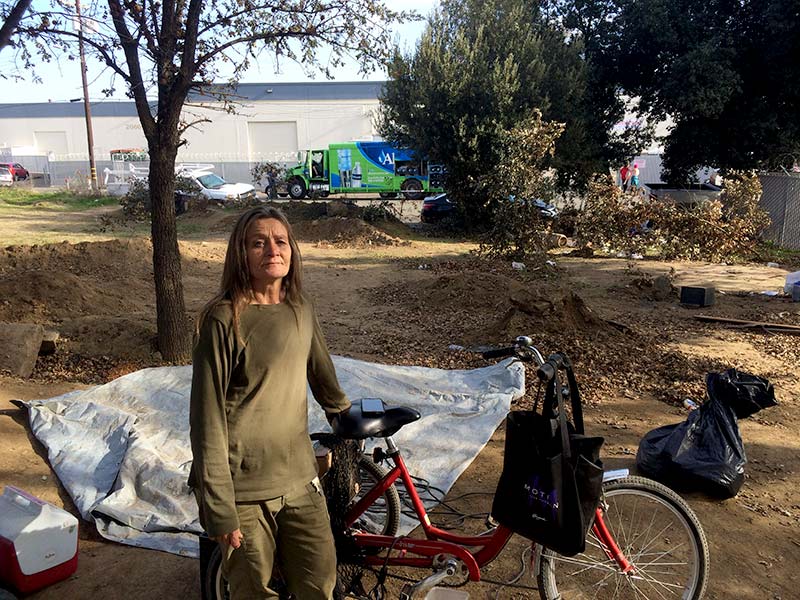 Mary Buck has been living on Sacramento streets off and on for 20 years. She says the new winter shelter will allow her to regroup and move to Minnesota to start a new life. Bob Moffitt / Capital Public Radio
"They put 'em in the kennels and they do an overlook on 'em to make sure they have their shots, their rabies shots and the chip," Buck says.

"Our usual winter program that we have, Winter Sanctuary, only gives people shelter overnight," Harris said. "So, people are picked in the River District, bussed to faith-based communities and then dropped off back in the River District the next morning with no services attached. It helps keep people alive, but it doesn't help them solve their issues."

Harris said the shelter will cost about a million dollars to operate. Volunteers of America will run the shelter.

If the shelter is successful in reducing homelessness, the City will consider opening a year-round facility next year.

California coronavirus updates: California may have to send back millions in federal COVID-19 funds tied to schools