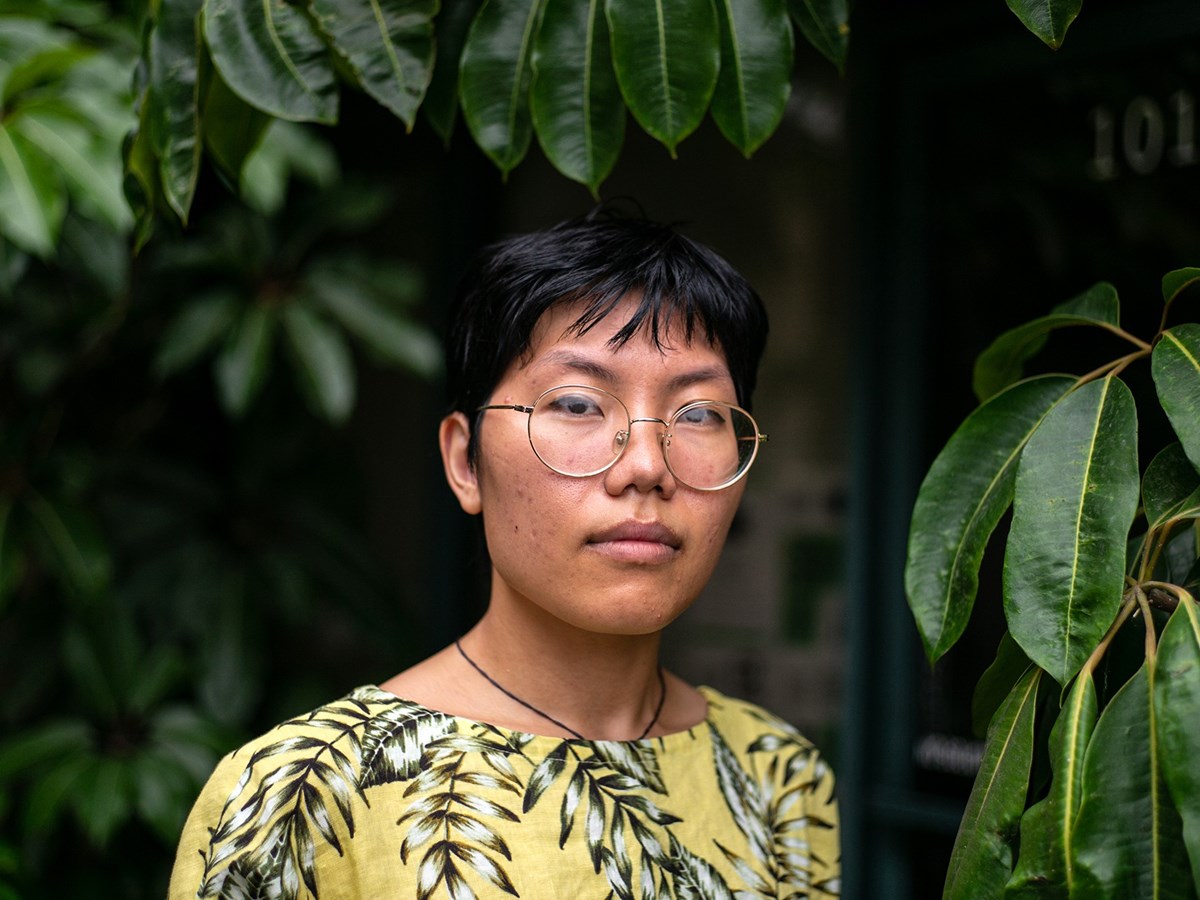 Phuong Vo, a program director for the California Healthy Nail Salon Collaborative, stands outside her office in Garden Grove, on Oct. 7, 2021. She is helping non-English speaking clients apply for rent relief.

Now that eviction protections in California are tied exclusively to whether a tenant applies for rental assistance, advocates are urging the state to take a closer look at who’s being left behind.

The tenants living in the most precarious conditions — immigrants who speak limited English, don’t have a traditional lease or face digital barriers — are not applying for aid at the same rate as their estimated need, advocates say.

“Everything shows you how it’s people, who were already more vulnerable to the pandemic’s health and economic impacts and past burdens of systemic racism and exclusion, who are being left out of this program,” said Sarah Treuhaft, vice president of research at PolicyLink, a nonprofit that has been tracking data on renters at risk of eviction.

In June, a coalition of tenant advocacy groups including the Asian Law Caucus, Asian Americans Advancing Justice-Los Angeles and Bet Tzedek filed a complaint with the state Department of Fair Employment and Housing alleging language and disability discrimination in the state’s rental assistance program.

The complaint, which is now in mediation, pointed out several problems: non-English speaking applicants must navigate various English-only pages before finding an application portal in their own language; poor translations from an overreliance on Google Translate; and gaps between the number of applications received by non-English speakers and the state’s demographics.

Also in June, the state made a series of changes to its application to make it easier for these tenants, including dropping multiple documentation requirements and professionally translating their web pages — previously only available in English and Spanish — into Vietnamese, Chinese, Korean and Tagalog.

The California Department of Housing and Community Development says it has spent more than $1 million on ads trying to reach Asian language speakers, and has contracted with 144 local organizations, who in turn work with more than 100 partners, to do the grassroots work.

But the state’s most recent numbers actually show a drop in applications from non-English speakers.

In June, 82% of applicants marked English as their primary language, according to data shared with CalMatters by the housing department.

As of Sept. 26, that number increased to 86%. As completed applications spiked from 54,500 to 226,000 over that period, applicants who reported speaking mainly Chinese dropped from 1.5% to 1% and Spanish speaking applicants dropped from 13% to 11%.

Measuring equity in rent relief is tricky, mostly because of the lack of data. The closest available comparison might be the language spoken by renters in California who make less than $50,000 a year, according to Treuhaft.

The state housing department, however, downplayed those discrepancies. It said like any question on a survey, primary language is subjective. An application might be filled out by an aid worker or a family member whose primary language is English, when the tenant might speak Korean. Also, the department points out, only about half of applicants go through the state, while the rest apply through local programs with different income and need-based criteria.

The agency has so far refused various public record requests for data regarding wait times for rent relief payments or success rates for applications.

Geoffrey Ross, the department’s deputy director, said that data was not tracked in a format that can be shared, and said the average turnaround time was four weeks for all applicants. He also said no eligible applicant has been denied, so the data would not be different solely based on the tenant’s language or race. Undocumented immigrants are eligible.

Overall, the state says it has approved nearly 61,000 applications and paid out $719 million of the $2.6 billion it’s managing in federal rent relief money.

Phuong Vo, a 25-year-old program coordinator at the California Healthy Nail Salon Collaborative, was phone banking in mid-August to encourage people to vote in the Sept. 14 recall election for Gov. Gavin Newsom when she asked one of her clients whether they knew the state had money to help pay back rent.

The answer was no. And most of her other clients said the same thing. So Vo pivoted her work to help inform clients about rent relief, which she says is critical to their economic survival — but wasn’t designed with them in mind.

“We just do it alongside our other duties just because no one else is,” she told CalMatters.

Of about 50 clients she asked, she said half had already taken on other forms of debt to pay back rent. (While the state only pays back rent owed to a landlord, renters can still apply for forward rent under the state program.)

The other 25 people she helped were unaware of the program save for one, who received an email about the program in English, but was unable to make it through the application. Could someone who only speaks Vietnamese fill out the application on their own? “Absolutely not,” Vo said.

While the rent relief information page on the state housing department’s website has been translated professionally, the application portal is still translated using Google, which can be imprecise. For example, the Vietnamese word for “save” on the application is typically used when talking about saving a life as opposed to a document, Vo said. Similarly, the Chinese application translates “save” to “conserve,” according to Hickey.

Vo said she prefers filling out her clients’ applications in English.

Ross said the application’s translation software is not something under the agency’s direct control, as it is run by a private contractor, whose agreement with the state recently more than doubled in value.

People with sensory disabilities have also been excluded because accessibility was an afterthought in the application’s design, according to Zeenat Hassan, staff attorney at Disability Rights California. The website, she says, is not optimized for screen readers used by people who are blind or visually impaired. The hotline hangs up on clients after 20 seconds of silence, a problem for hearing impaired individuals who use an American Sign Language interpreter.

“To overlook these issues is pretty disheartening,” Hassan said, because “these are the folks at the core” of who the state housing department should be serving.

The biggest challenge, however, has been calls from people facing eviction who simply don’t know help is available, she said.

In the Census data Treuhaft has been tracking, 56% of California renters behind on payments said they had not applied for rent relief. These tenants, however, also include those above the income limit who might not be eligible, according to Russ Heimerich, a spokesman for the housing department.

But the data raises an important question: Is the application tripping people up? Or are certain groups underrepresented because they simply don’t know the aid exists?

“It’s really critical to think about where the logjams are actually happening,” said Vincent Reina, a researcher at the University of Pennsylvania who is examining the applications coming into the state to determine how equitably funds are being distributed. Most of these questions, he said, remain unanswered.

The vast majority of clients Vo has helped since mid-August have still not heard back on their applications. She fears the delays are due to their unconventional housing, such as renting out a room without a lease.

While applicants can just check a box swearing that they qualify for relief, they must still upload a series of documents to move through the application process, including pay stubs, tax forms and rental agreements, which many of Vo’s clients have struggled to provide. “I wish they were trusting the people they said they would,” she said.

Ross said most applicants successfully apply with only one or two documents, and those without traditional documentation are being treated the same as any other applicant.

Sandra Garcia, 65, who lives with her son and his family in an unincorporated community near Porterville, in Tulare County, told CalMatters she is about $3,000 behind on rent.

She said she tried to apply for rent relief last April, but a case manager at a local nonprofit told her that without pay stubs to prove a loss of income, she would be unable to qualify. Garcia explained she had been laid off from her farmworker job — “the oldest ones were among the first to be let go,” she said in Spanish — so she had no pay stubs.

I had heard something about it on television but didn’t know there was still money available, and I didn’t know where to look.

The state program allows tenants to claim loss of income without documentation, but Garcia said she wasn’t aware because she gets her news mainly through Facebook, and no one in her circles posted about it.

“I had heard something about it on television but didn’t know there was still money available, and I didn’t know where to look,” she told CalMatters.

Besides, Garcia said, many landlords in rural towns like hers are struggling to stay afloat.

“They’re just as poor as us,” she said. “They don’t want to end up in court in case they’re the ones who are sued. And they don’t want to waste their time, either, with something that isn’t even going to help.”

Advocates have worried that tenants whose landlords don’t participate in the rent relief program would be disadvantaged in the application process. Ross, however, said they only have to wait an additional five days, during which the state tries to contact the landlord.

“We know that there’s a lot of housing that’s going on in the shadows,” he said. “We know that some landlords will not participate because they’re concerned about that. Again, we have to wait five days, they don’t participate, we have an eligible application from the tenant, we can do that.”

But advocates including Armando Valdez, director of the Community Center for Arts & Technology in Fresno, insist the state isn’t doing the grassroots work it takes to reach the people most vulnerable to eviction.