City of Sacramento sets up department to respond to nonviolent emergencies 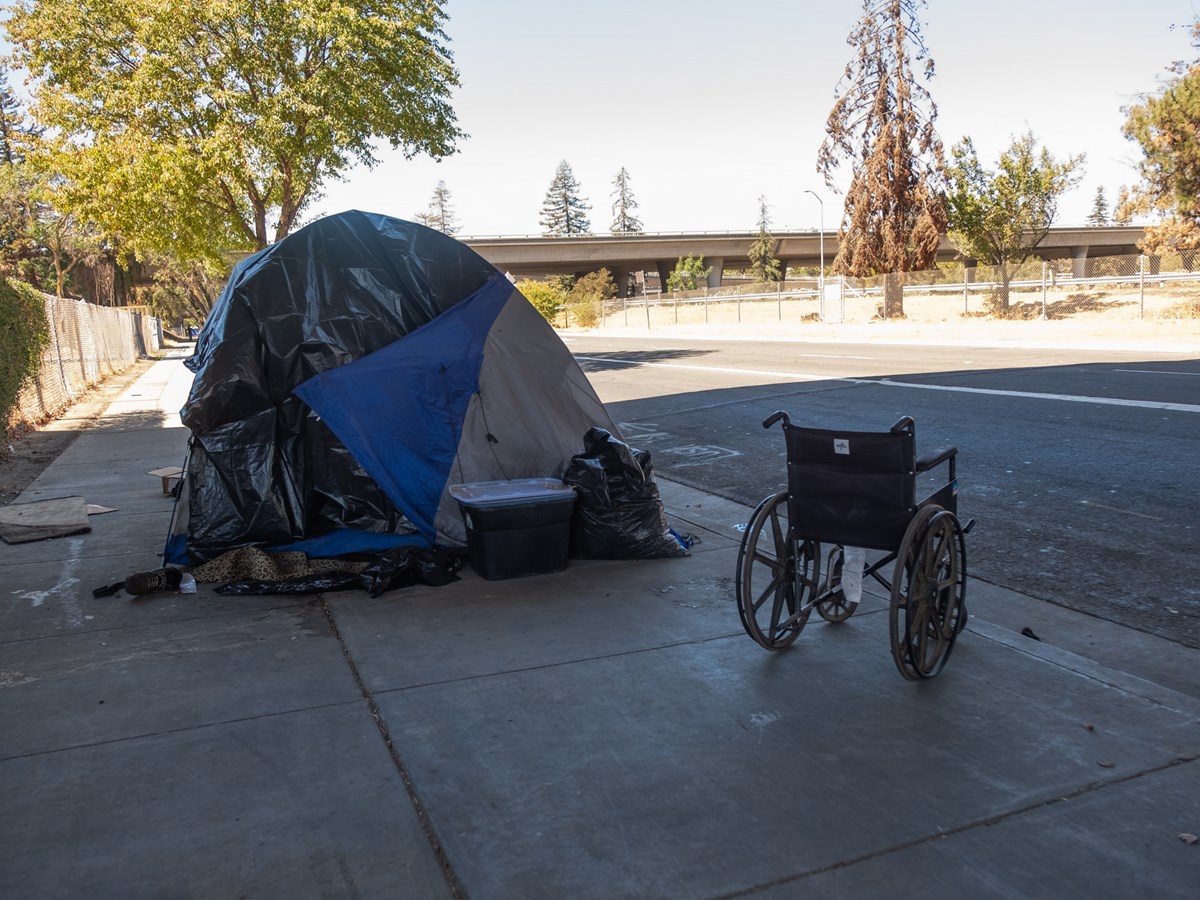 An encampment near the X Street shelter in Sacramento, Calif. on Monday, Sept. 20, 2021.

Homelessness has grown in Sacramento County. The county’s latest point-in-time count in January 2019 was 5,570 people — but their estimation on the total number of people experiencing homelessness annually is 10,000.

The causes of homelessness are systemic and complex, with many experts, lawmakers and others disagreeing on what is most helpful.

As the unhoused population grows in Sacramento and 311 calls about encampments increase, the city has set up a new department tasked with responding to those calls without bringing in the police.

The Department for Community Response was created by and is spearheaded by director Bridgette Dean. The idea behind the DCR is to take a holistic approach in addressing the nuanced and layered root causes of homelessness by connecting services with people calling 311.

Dean spoke with CapRadio Insight Host Vicki Gonzalez about how she has an intimate experience with homelessness.

“I am an individual who has experienced many of the things that individuals who we respond to every day in crisis and DCR have experienced,” Dean said. “That led me into social work, which, for many of us in social work, there’s an innate fit there.”

Dean broke down what she hopes the DCR will be able to achieve with long-sought-after solutions for mental health and the burgeoning safety crisis that’s become synonymous with California cities.

I was a child of poverty and grew up in a family with a lot of dysfunction, mental health issues and substance abuse disorders. I was a teen mom. I had my first child when I was 18 and my second about 15 months later. I’m a high school dropout who went back to school and got my GED and higher education as a single mom … So, I started to do some social work in schools. I ended up being a school administrator and oversaw a continuation high school for many years and again found myself working with a population who was often disenfranchised, disconnected and underserved.

That led in to an opportunity to create the first social services unit in California where, as a non-sworn social worker, I oversaw swore-in units that responded to mental health and homelessness [in Sacramento] … I am a resident of the city of Sacramento and so the opportunity to serve the city I live in and the city that my grandchildren will grow up in was a chance I just couldn’t skip.

Having been a single mother who has experienced poverty as a child, then as a mother, there have been times when my children were younger that I did not have a roof over my head or a home … That is a unique experience that I think we are visibly seeing on our streets every day right now, and everybody is seeing it.

It was hidden in the shadows for a long time, but I think today, what we’re seeing with homelessness is that it’s very present, and there is a lot of need out there for individuals experiencing it.

On what people with homes misunderstand about people experiencing homelessness

I think people don’t understand that people don’t opt to be homeless. I think the biggest thing we’re missing when we talk about our population is that you’re walking by on the street or driving by every day, is that there’s a myriad of complex issues that individuals may need to address, whether it’s long-term lived trauma, or it’s substance use disorder or mental health disorders that aren’t being fully treated or cared for, for lack of access.

Again, that disenfranchisement, we see a larger population of individuals in our homeless community that are non-white. And so when we start seeing our Black and Brown brothers and sisters on the streets, we need to start asking, why is that, and where is the gap still existing?

The other thing I think we don’t recognize is that it’s hard to get by and in our society at times, and that a lot of the wage gaps we hear about are the poverty gap or the housing gaps are real and that individuals who are just one paycheck away — which so many are — end up on the street often as their only option.

The [poverty] cycle can be long-term.

I always share the experience of individuals who can often receive some type of resource or cash aid — let’s say … social security. But they have to have an ID and an address.

Well, if I’m living on the street, I don’t have access to that. We have worked with people who are just getting that picture ID from [the] DMW, which requires multiple proofs of identity paperwork is also difficult.

So we create hurdles often in our society that keep people from getting into the next step of support. I think that’s one of the big things I’ve seen over my years ... We have a lack of connection for these folks to walk in and get the support they need right now when they need it.

So the Department of Community Response was brought into fruition in July of 2020 by the council following the killing of George Floyd.

And really, what it was a response to the community requesting for an alternative model or response, [of] addressing various aspects of societal need and crisis that weren’t necessarily criminal.

So the Department of Community Response really is a long-term goal of building this department into a space where we can respond to homelessness, mental health, substance use disorders, juvenile related issues that may occur, and provide a space where it doesn’t have to be a police officer responding to that.

That’s not to say we don’t need policing. We do. There is a need for police … they have a unique skill set that we need available in our community.

But I do think the difference here in the city of Sacramento is they have moved forward with creating a systematic change in response, and really, the Department of Community Response will be a piece of that and be the leader in that … I think what’s important with DCR and the city of Sacramento is that our leadership and our council are relaxing that everything that comes through 911 isn’t necessarily a police response and that there’s other supports, expertise and tools out there that we can bring into that crisis to support people without law enforcement.

I do think it’s a unique experience to shift an entire system over to another response or added response.

I always talk about DCR as the third part of the “first response triangle” in the city of Sacramento. So we are a part of police, fire, DCR … We have four units out in the streets right now that are available Monday through Friday, and we use 311 as our primary way to have citizens engage us and respond. However, we also work with several other non-profits in the community, which is one of our main goals … the other huge piece that we couldn’t do without is our community advocacy.

On the speed DCR has demonstrated since opening last year

I do think that the council when they voted this in July of 2020, wasn’t necessarily expecting the full-court press, but the reality is people are in need and waiting for everything to be in place perfectly to start helping folks is not what we should be doing, and it’s not what we will do with DCR in the city. We just move forward.

We have had a great opportunity with homelessness to show the community that there’s a lot of complex issues that can be addressed with non-police response and also working collaboratively with different partners … we’re averaging around 250 calls out of 311 a week right now that we’re able to get to.

Whether that is responding to somebody who’s concerned about an individual who’s unsheltered in their community or a concern and, at times, complains, we respond to those.

Steve Milne contributed to this story.