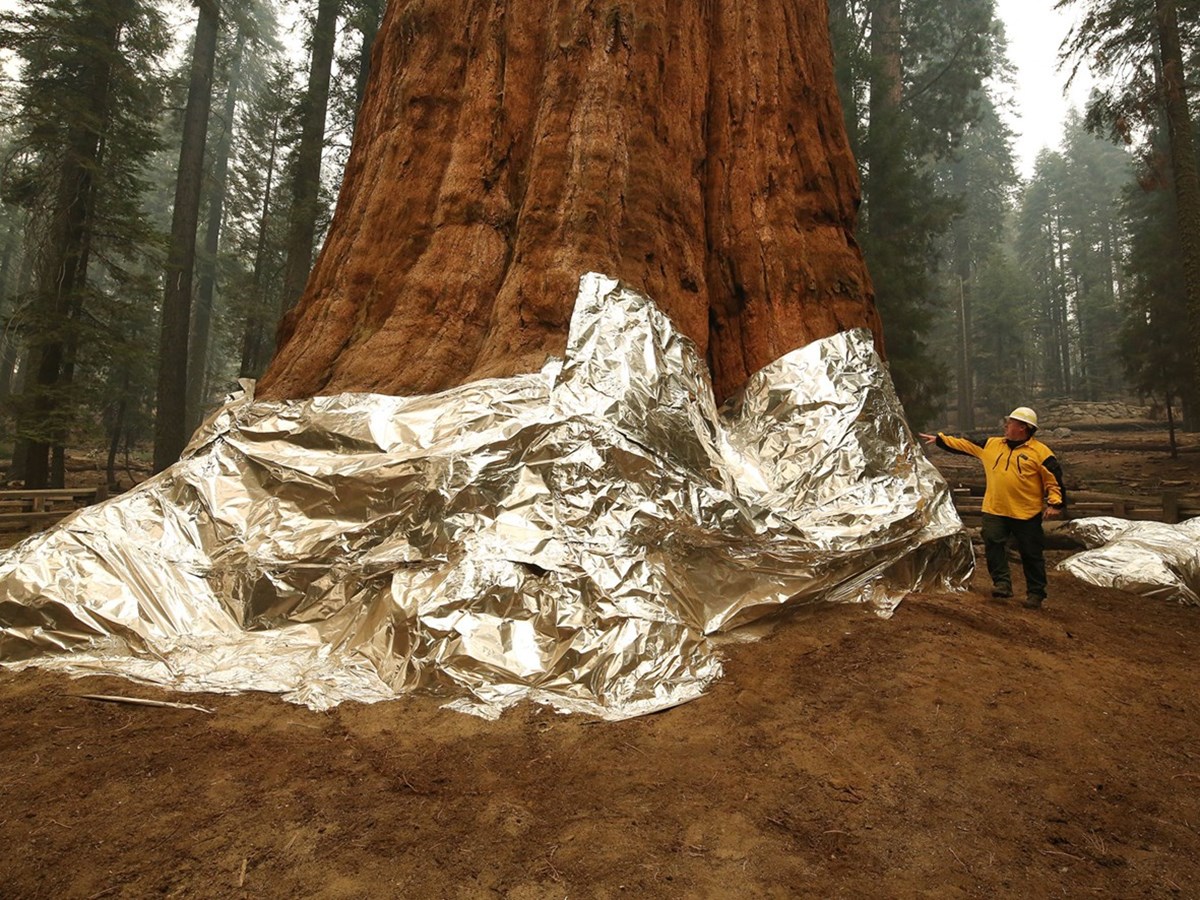 Gov. Gavin Newsom held a news conference on Thursday at Sequoia National Park — where firefighters have been battling to protect ancient groves.

SACRAMENTO, Calif. — As California trudges into another autumn marred by toxic wildfire smoke and drought-parched reservoirs, state lawmakers have cast climate change as a growing public health threat for the state’s 40 million residents.

But they were willing to push the argument only so far.

On Thursday, against the smoldering backdrop of Sequoia National Park, where the massive KNP Complex Fire is burning uncontained, Gov. Gavin Newsom signed a $15 billion legislative package that he described as an unprecedented investment by any state in climate resiliency. The legislation outlines significant new efforts to bolster wildfire prevention, expand clean water supplies and build a network of community-level safeguards to protect people from episodes of extreme and potentially deadly heat.

The measure is one of several bills targeting the health impacts of perennial seasons of fire and drought that sailed through this year’s legislative session.

Still, the Democratic-controlled legislature stopped short of taking the momentous action that climate experts argue is central to the health of current and future generations: Lawmakers failed to pass legislation to more quickly and aggressively reduce the state’s share of the greenhouse gas emissions warming the planet.

“There were good environmental bills that passed, but they were incremental,” said Mary Creasman, CEO of California Environmental Voters, formerly called the California League of Conservation Voters. “We can’t give ourselves credit for doing anything less than science tells us we have to, and science says we are nowhere near doing what we need to be doing.”

Among the climate health bills that still await Newsom’s consideration are measures to make the state’s emergency stockpile of N95 masks available to farmworkers on days of dangerously smoky air and a requirement for the state to create detailed guidelines that counties can incorporate into emergency response plans when air quality is poor because of wildfire or other pollution. Even short-term exposure to wildfire smoke can trigger asthma and heart attacks and has been linked to increased risk of infections like bronchitis and pneumonia, among other illnesses.

Newsom has until Oct. 10 to sign or veto these and hundreds of other bills lawmakers sent him in the final weeks of the legislative session.

California has endured back-to-back years of record-breaking wildfires. Epic blazes not only have destroyed thousands of homes and businesses, but also spewed toxic metal contaminants and hazardous particulate matter that can travel through the air for hundreds of miles.

For example, exposure to lead, found in the smoke plumes from the 2018 Camp Fire that destroyed the town of Paradise, over time can trigger high blood pressure and cancer in adults, and learning deficits in young children.

“As California’s wildfires intensify and ravage our state, we must do more,” said Assembly member Robert Rivas (D-Salinas), who introduced AB 73, which would classify wildfire smoke as a public health emergency. 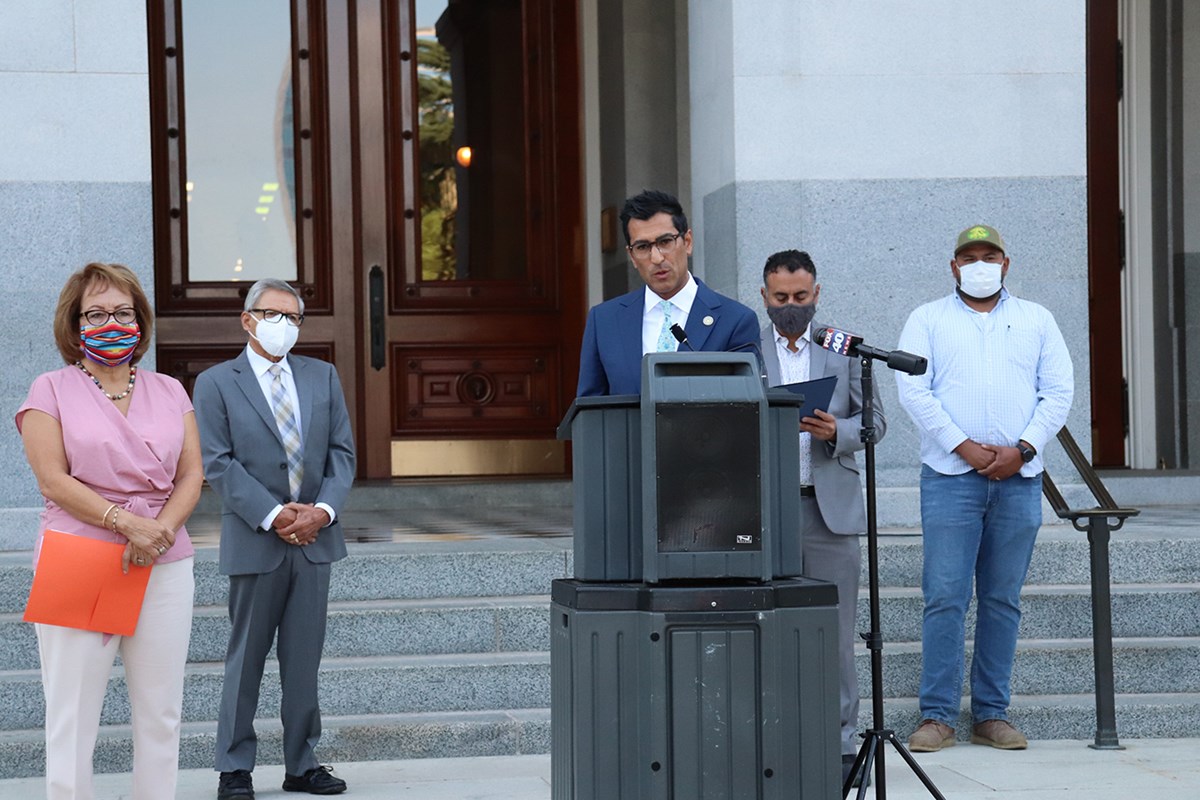 If Newsom signs the bill, California’s more than 380,000 front-line agricultural workers would be eligible to receive N95 masks and other protective equipment from a state stockpile that lawmakers created last year for health care workers, educators and others deemed “essential” in response to the covid-19 pandemic.

“We must do all we can to ensure that our farm and agricultural workers are not risking their health and their well-being every single time they go into the field to harvest and produce the food we all eat,” Rivas said.

Despite the increasing frequency of these oppressive “smoke days,” there’s very little communication to the public about how to protect themselves, said Marc Carrel, president and CEO of Breathe Southern California, a nonprofit that advocates for clean air policies. When wildfire smoke choked much of Southern California in fall 2019, some schools sent kids home, others didn’t. Sports leagues, often run by volunteers, got conflicting advice from city and county officials.

“While the state has protocols in place to address the flames themselves, there doesn’t seem to be anyone whose focus is on the smoke that comes from those fires,” Carrel said.

AB 619, by Assembly member Lisa Calderon (D-Whittier), would require the California Department of Public Health to draft health safety guidelines for use when air quality is poor during events such as wildfires. Counties would then be required to follow up with emergency plans for alerting the public about the health threat and recommended response, and provide emergency provisions such as air purifiers, oxygen and medications to residents with respiratory and pulmonary diseases.

The climate bill Newsom signed Thursday encompasses multiple ambitious projects. Among them: $1.5 billion for wildfire prevention, including an infusion of funding to clear dry and diseased brush and trees that fuel massive fires. And $800 million for a three-year initiative to address extreme heat.

The extreme heat initiative includes $100 million in grants to create more shade and promote evaporative cooling; and $100 million to build community resources such as hydration stations, cooling centers and clean air centers “to mitigate the public health impacts of extreme heat and other emergency situations exacerbated by climate change, such as wildfire, power outages, or flooding.”

“We talk about climate change a lot and reducing greenhouse gas emissions, which is important, but we’re also experiencing climate change in the present,” said Assembly member Luz Rivas, a San Fernando Valley Democrat who advocated for the excessive heat funding. “Heat causes more emergency room visits or deaths each year in the country than all other weather-related disasters combined.”

At Thursday’s news conference, Newsom said the state’s $15 billion investment over the next three years marked major steps to “future-proof California” and make the state more capable of addressing the extremes of drought, wind, fire and heat that scientists say are the natural fallout of a warming planet. 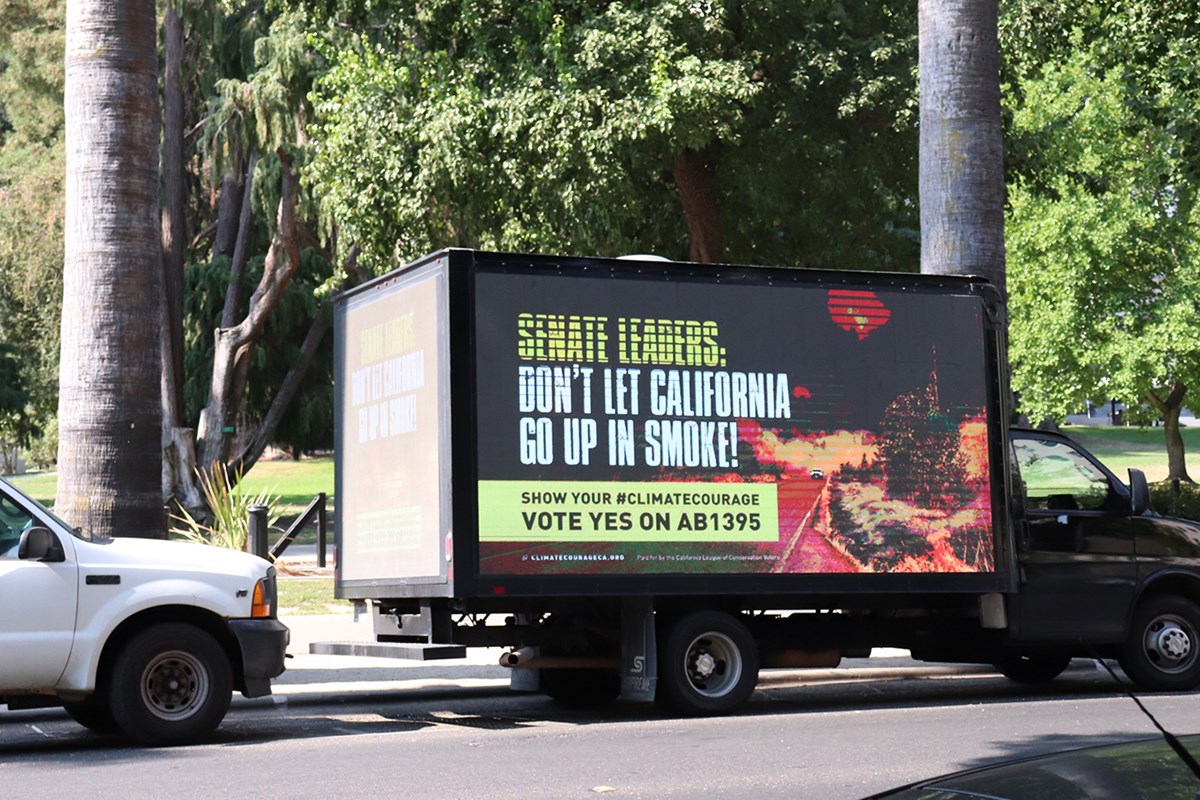 A truck parked outside the state Capitol on Aug. 24 urges lawmakers to support a key climate bill. But the measure, AB 1395, failed to get the needed votes.Samantha Young / KHN

But legislators this session opted not to send the governor several controversial climate-related bills, shelving measures to ban the oil-extraction technique of fracking or require the California Air Resources Board to conduct a comprehensive health analysis of the state’s climate plan. Most notably, they blocked a bill by Assembly member Al Muratsuchi (D-Torrance) that would have required the state to achieve a greenhouse gas emissions target of “net zero” by 2045, necessitating dramatic changes in the power Californians use and the vehicles they drive.

Three years ago, then-Gov. Jerry Brown issued an executive order calling for a zero-emissions target by 2045, but the goal isn’t adopted as law and could be overturned by a future governor. Current law requires the state to reduce emissions 40% below 1990 levels by 2030, falling behind other states that have passed more aggressive targets. Massachusetts, Nevada and Virginia are among those that have adopted carbon-neutral emission laws.

AB 1395 passed in the Assembly but didn’t draw the votes it needed in the Senate after strong opposition from labor and oil industry groups that argued the bill would lead to job losses. Many environmental groups saw it as a stunning defeat in a state that 15 years ago became the first in the nation to impose climate goals in defiance of a federal government that had abandoned global environmental talks. Still, Senate Democrats defended the work they did and said the climate bill needed further development to protect jobs, especially in poor communities.

“This bill is unfinished. Unless we seize every opportunity, the working poor will always be last in line,” Sen. María Elena Durazo (D-Los Angeles) told colleagues during floor debate. “Fighting climate change doesn’t have to mean regressive economic policies. Environmental justice doesn’t need to come at the expense of economic justice.”

This story can be republished for free (details).