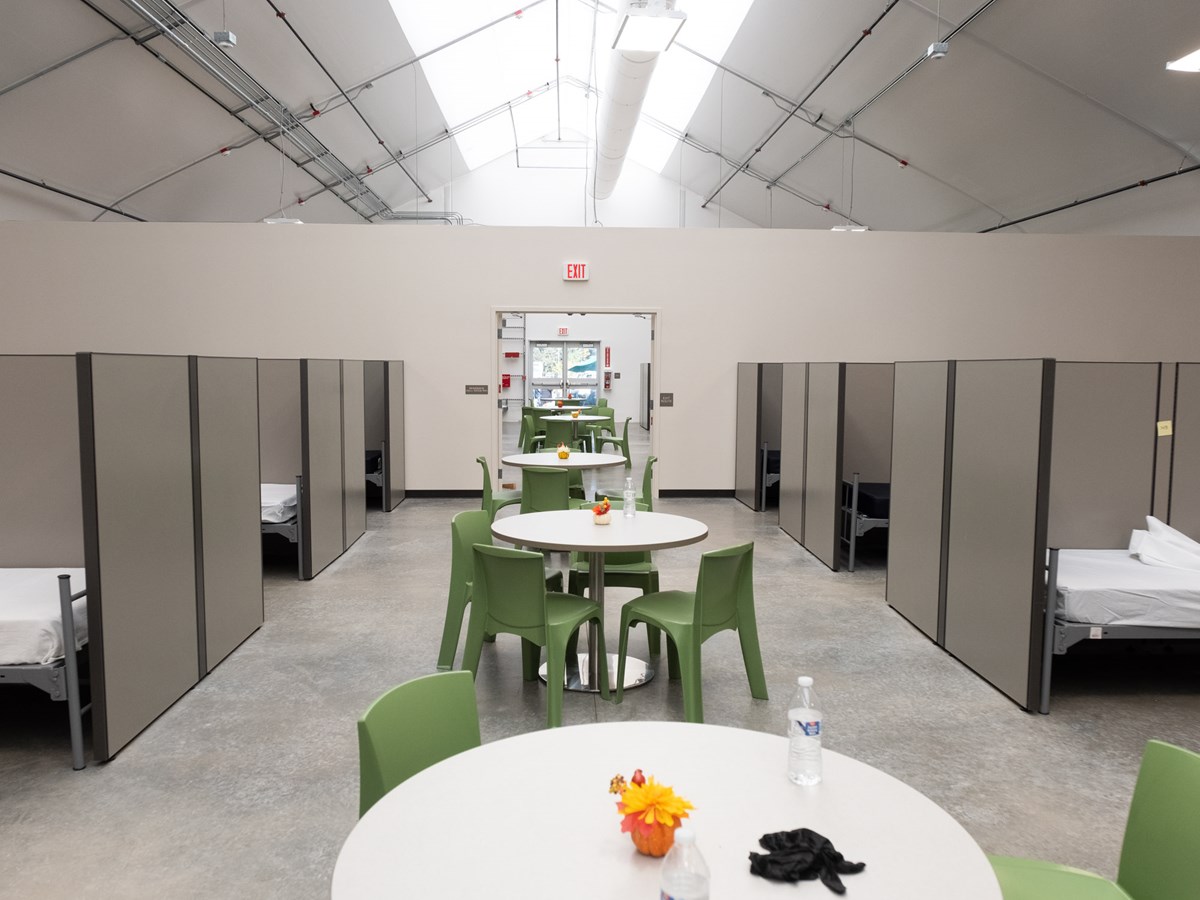 Pets, possessions and partners can come with homeless people who are referred to the city’s newest navigation center on X Street, a shelter for unhoused people that opened Tuesday.

It’s part of the city’s continued effort to address homelessness, which includes the city’s Comprehensive Siting Plan, passed in August. But that plan could stall, after a group filed a lawsuit last week citing environmental and health concerns around five tiny home sites planned under the W-X freeway.

The referral-only X Street center can house up to 100 people at a time and is intended to be a low-barrier shelter: people can come as they are, with their pets, possessions and partners, and there are no criminal background or sobriety checks they need to pass.

Still, there are some basics, said Amani Sawires, the Chief Operating Officer of Volunteers of America, which runs the center.

“You can’t have weapons, you can’t do anything that’s going to harm the community here,” she said. “But we really are about harm reduction, we don’t have a zero tolerance policy on anything…The rules that we have here are really around safety.” 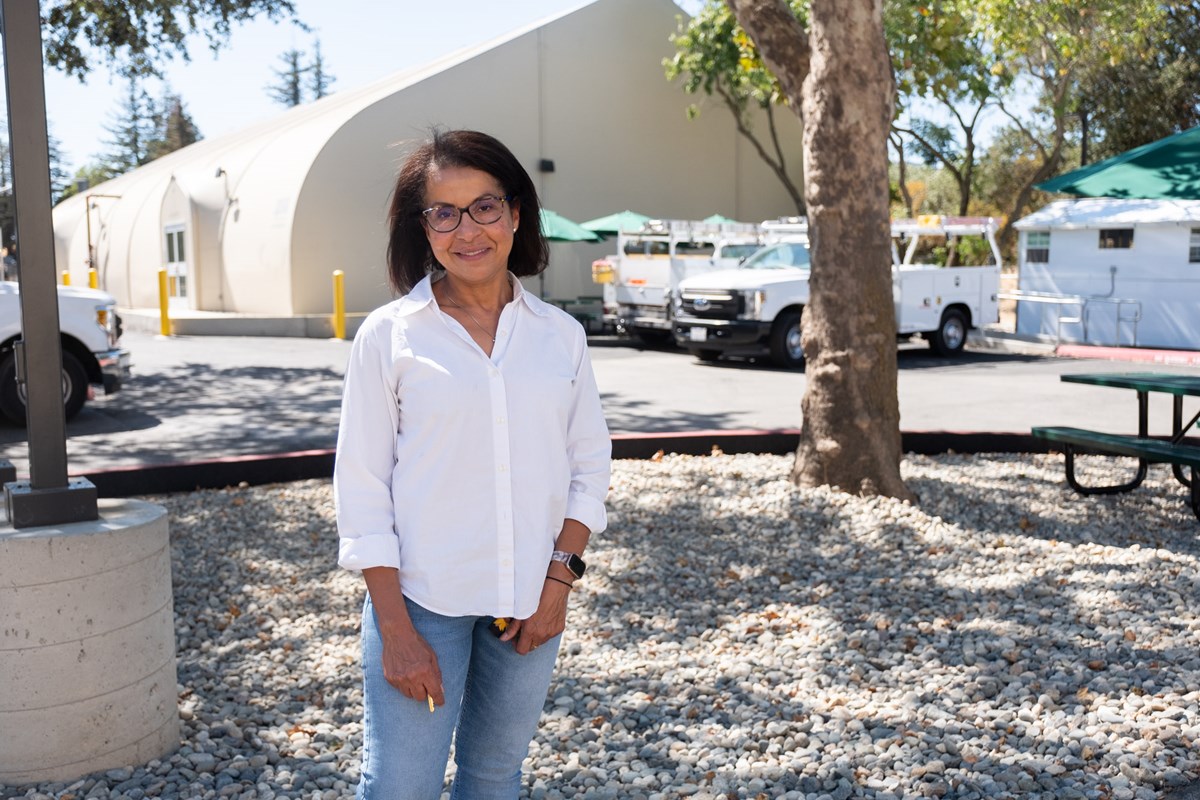 Amani Sawires is the COO of the shelter on X Street in Sacramento, photographed at the facility on Monday, Sept. 20, 2021.Andrew Nixon / CapRadio 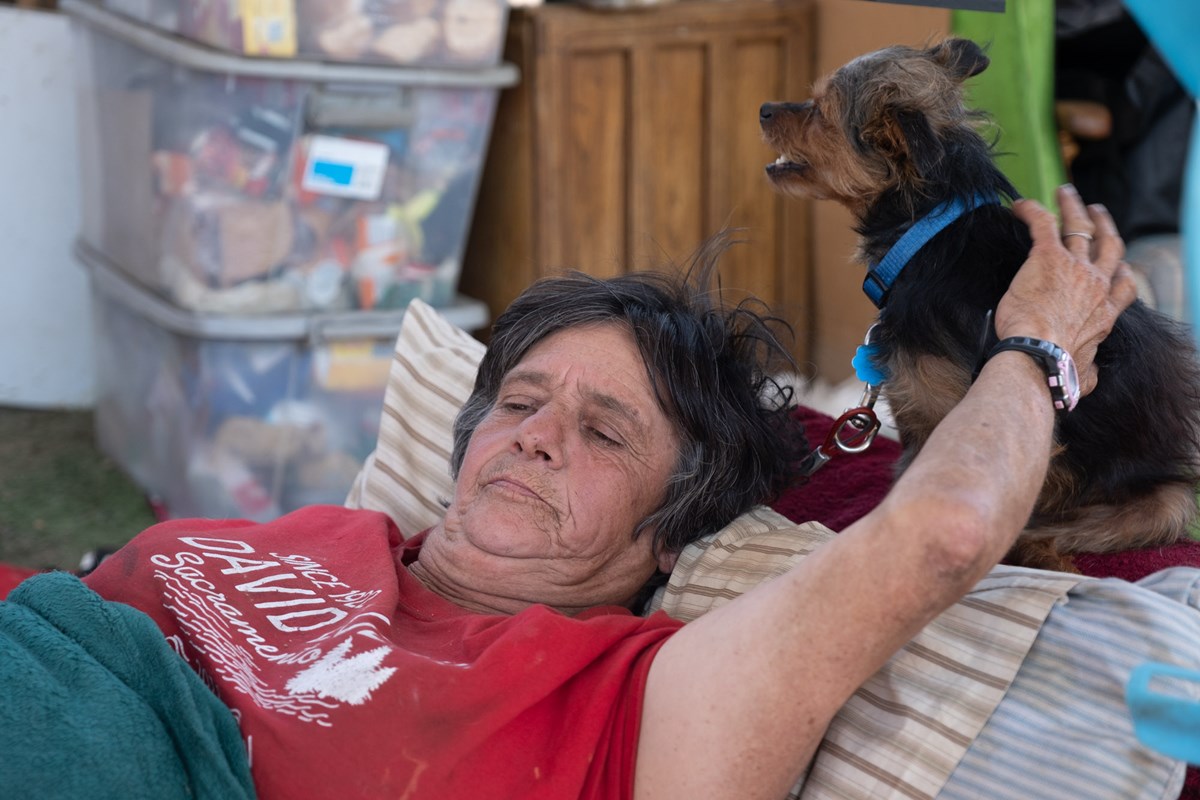 Pompeii has been unhoused for 3 years and was born and raised in Sacramento. She’s currently living near the new navigation center and said that its outreach team has talked to her.

“For me, I would love to go in there — I’d love to help and work, I mean, take care of the animals,” she said. “But I mean, they said they [the animals] had to be in a cage, which these dogs are kind of used to, but I can’t sleep without them.” 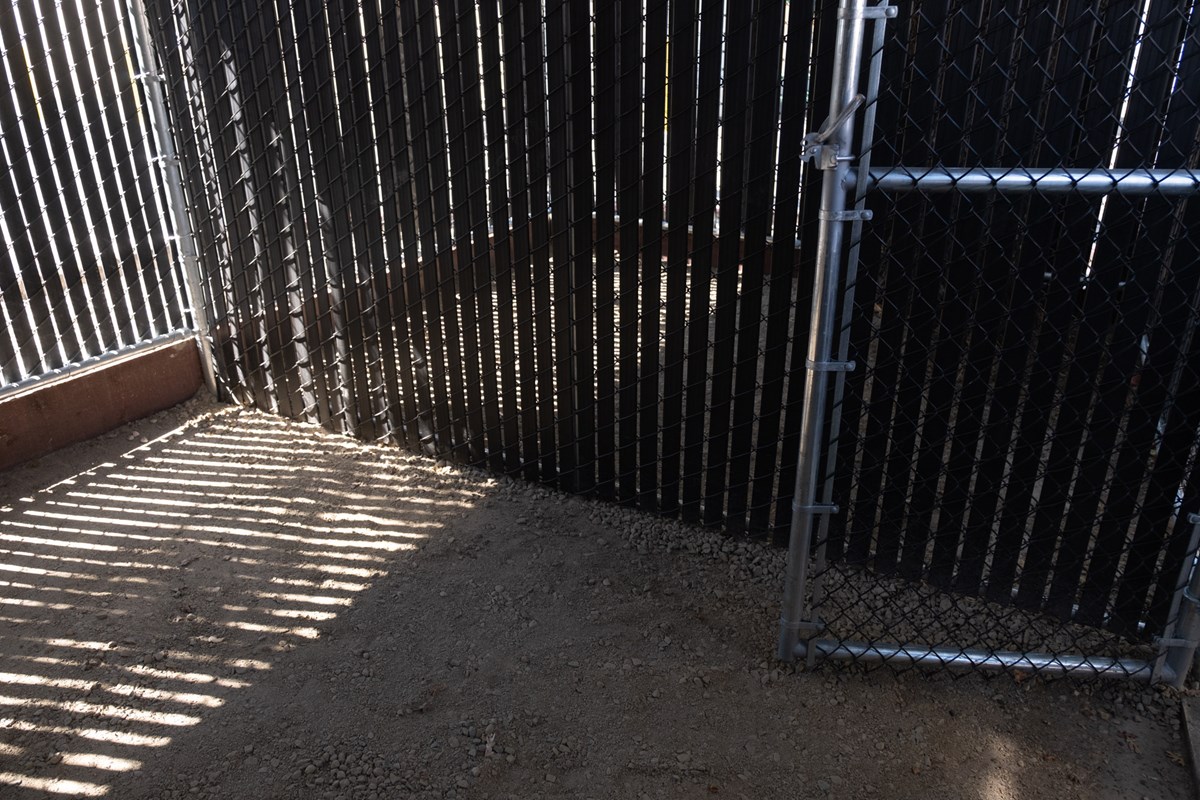 The kennel at the shelter on X Street in Sacramento, Monday, Sept. 20, 2021.Andrew Nixon / CapRadio

While pets onsite will receive veterinary care, they aren’t allowed to sleep in the dorms with guests.

Even so, Pompeii can’t think of other shelters that allow people to take their pets.

Sawires said the X Street facility is meant to be transitory. There will be social workers onsite, substance use services, mental health services and a culinary skills academy with the facility’s training kitchen and a partnership with American Legion High School, among other services.

Their hope is to serve 200 people in the first year — 100 every six months or whenever housing is found.

“It is our goal to get the majority of those people housed — some people aren’t going to be ready, and we will have planted a seed and they’ll go do something else, but the seed will be planted,” she said.

Since the shelter is referral-based, Volunteers of America has been doing outreach within the surrounding encampments with help from other advocacy groups and the newly-created Department of Community Response, which oversees the city’s response to homelessness.

Sawires and Bridgette Dean, the director of the Department of Community Response, both stressed the importance of building relationships and trust in the process of working with unhoused residents to find a housing situation that works for them.

“It really is about building relationships, rapport and trust,” Dean said “We have a lot of individuals who have been disenfranchised from systems, and because of that, the trust isn’t there.”

Joe Smith, the policy director at Loaves and Fishes, said the navigation center is an “evolution of what previous shelter models have been.” 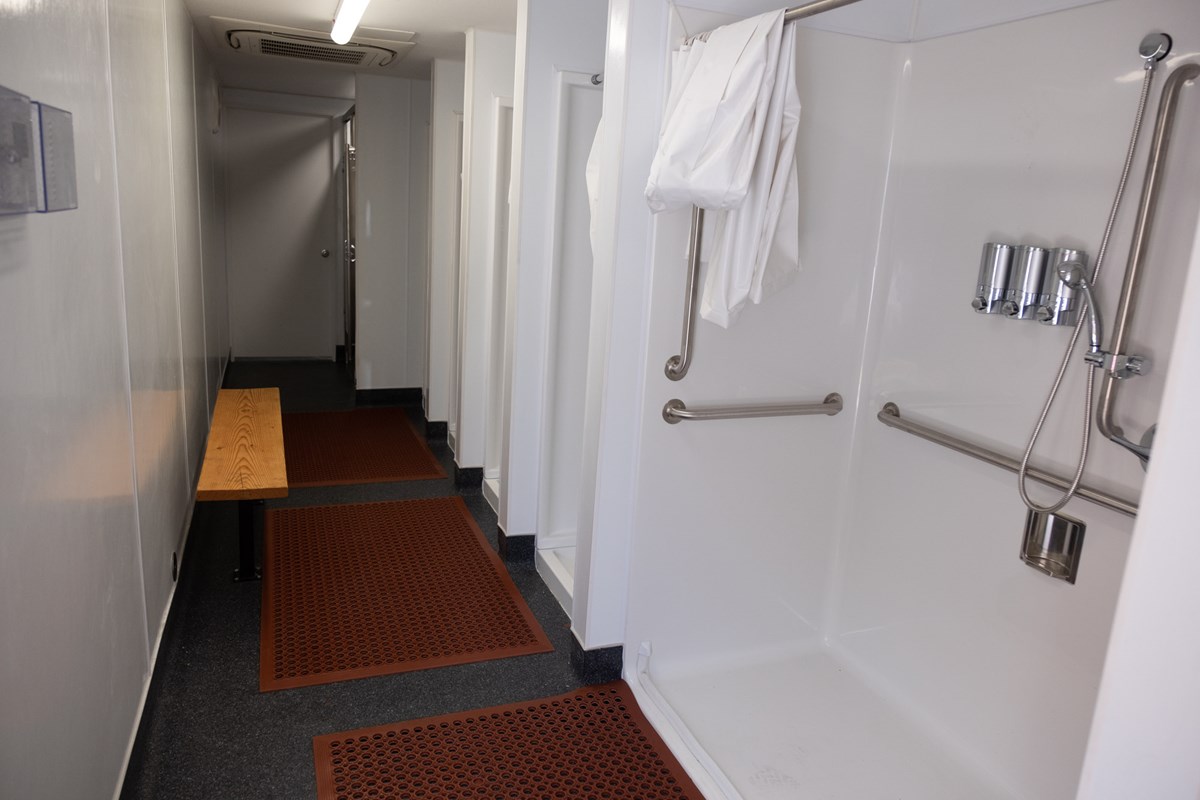 The bathroom at the shelter on X Street in Sacramento, Monday, Sept. 20, 2021.Andrew Nixon / CapRadio

A lawsuit leveled against the city’s broader homelessness plan also cited concerns on the health of unhoused people who would be sheltered at the tiny home sites underneath the W-X freeway, alleging that the city wrongly determined that those sites were exempt from an environmental impact review under the California Environmental Quality Act.

The lawsuit, first reported by the Sacramento Bee, noted the dangers of exposing hundreds of unhoused people to noise and air pollution and said the sites went against air agencies’ recommendations for siting residential buildings.

City Attorney Susana Alcala Wood said in an email statement to CapRadio that the complaint demonstrates the “complexity of the homelessness crisis” while underscoring the importance of the “multi-dimensional approach” by the City Council in addressing homelessness.

“The City is using all its available resources to respond to the needs of its residents and will continue to address the hardships encountered by unsheltered individuals while working to protect the health and safety of all our communities,” she wrote.

Other community members remain concerned about the city’s attempts to address homelessness, too.

The Sacramento Bee reported that a property owner in North Sacramento — who lives near the Railroad Drive shelter operated by Volunteers of America — filed a lawsuit against the city last week.

The lawsuit alleged that the owner suffered property damage and had to hire a private security firm, and though they asked the city to relocate the homeless and clean up the area, there was no action taken.

It alleged that the property was located in a “containment zone” developed by the city that isolated homeless people in less affluent neighborhoods. Wood said that there was no effort to keep homeless residents within specific parts of the city.

The California Homeless Union, along with its Sacramento chapter, denounced the siting plan when it was made public. Crystal Sanchez, president of the Sacramento Homeless Union, compared the X Street Shelter to a jail or internment camp. She said in an email to CapRadio that those who were institutionalized might not go there because it could trigger PTSD.

“I would ask the community: Would you live in a jail-like setting with 50-100 other people from all walks of life, knowing that in reality there aren’t services for you to actually go to?” she wrote.

She added that she believed the city needed to create permanent housing and should allocate the money for the siting plan toward that end.

“A good neighbor policy won’t hold up because people are being displaced and that means they end up back in front of businesses and residents,” she said. “This is our tax dollars being disingenuously used to appropriate their own political agenda. This isn’t about people.”

Richard Hernandez, president of the Newton Booth Neighborhood Association, said he recognizes the navigation center is a good structure and that people in his neighborhood are excited and supportive of the endeavor. But he also feels unheard by the city.

While the plan was being drafted, he shared his concerns about the overconcentration of sites with Councilmember Katie Valenzuela. He felt betrayed when her assurances that the plan would change weren’t reflected. 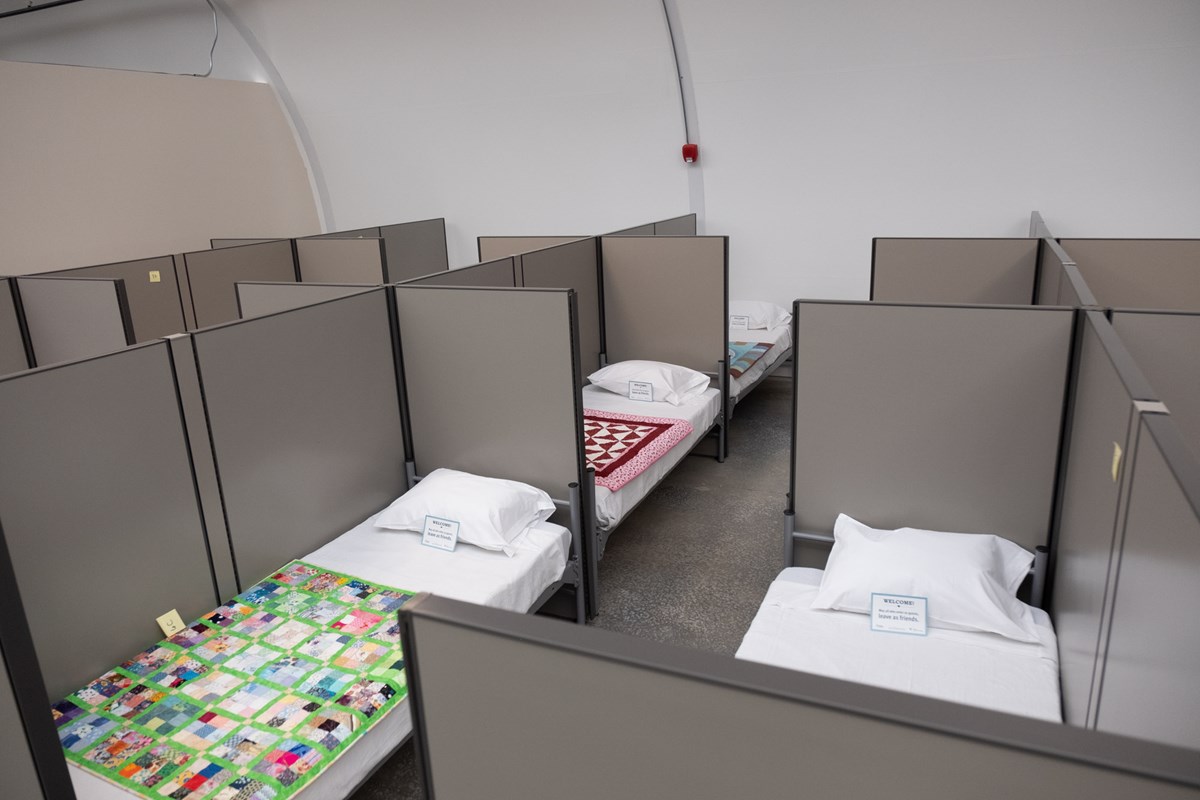 The dorm at the shelter on X Street in Sacramento, Monday, Sept. 20, 2021.Andrew Nixon / CapRadio

Concerns about inequitable distribution of sites were also brought up when the plan was first made public, with Faye Wilson Kennedy from the Poor Peoples’ Campaign noting most of the existing recently built shelters were in areas with high populations of people of color. She said that follows a historic pattern of wealthier communities not wanting to shoulder the provision of services to low-income, Black and brown folks. She said that “solutions needed to be spread throughout all communities.”

Hernandez said he was also concerned about whether the city had thought through the implications of building homes under a freeway.

“They’re going to live there 24/7, 365 days a year, they’re going to have noise, they’re going to have pollution,” he said. “Maybe some of the structures could prevent some of that, but if you’re living there all the time — and many of these folks may have underlying health issues — that can further impair them. It feels like no one ever really thought about that, [they] believed they would just build the buildings and everything would take care of themselves.”

If granted, the lawsuit would stop city construction on any current projects in the siting plan until the city complied with CEQA.