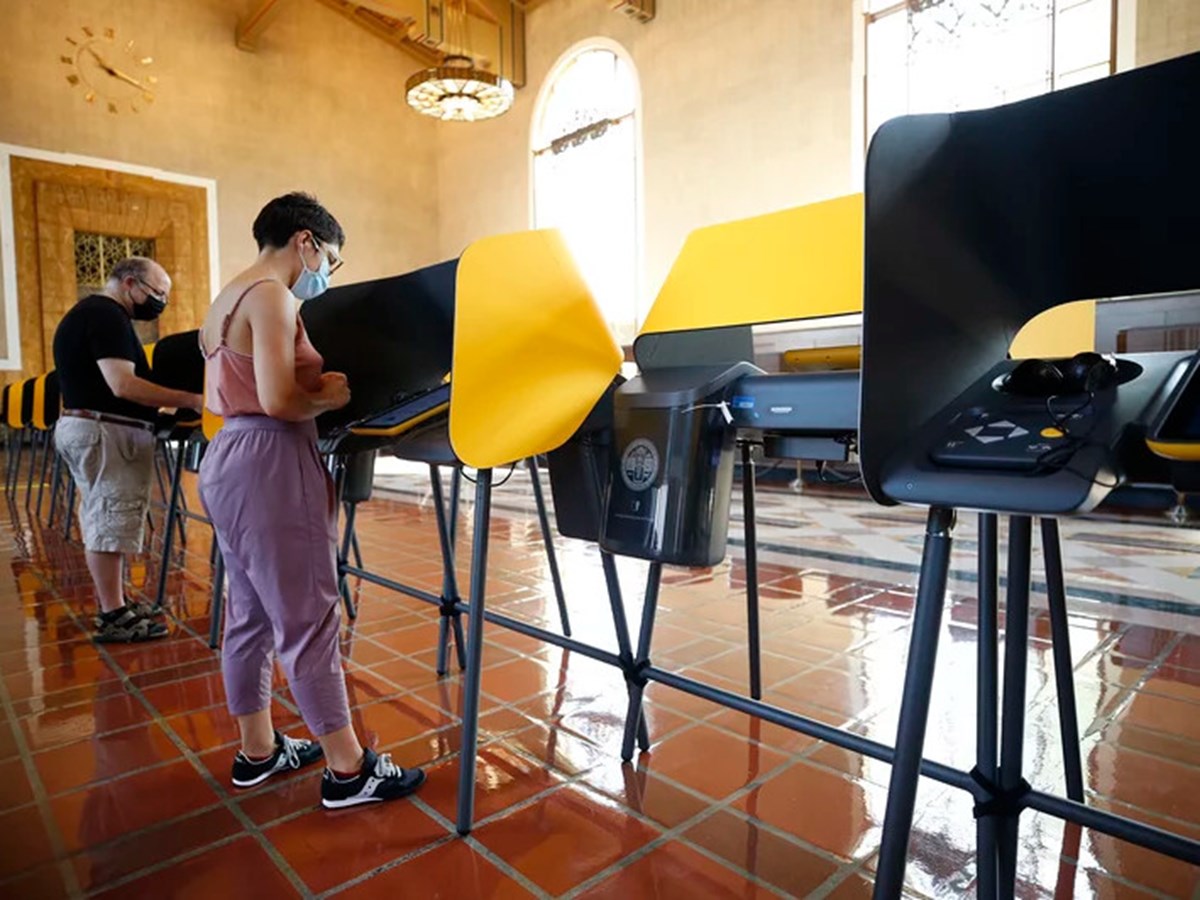 For the first time in nearly two decades, California voters will decide whether to remove their governor in a recall election on Tuesday, Sept. 14.

This time, it's Democratic Gov. Gavin Newsom's job that's on the line. In recent days, national Democrats have been weighing in on his performance in office over the last 20 months, trying to convince voters to keep him at the helm.

Vice President Harris swung through the San Francisco Bay Area last week, while former President Obama released a political ad in support of the governor. President Biden campaigned with Newsom Monday night in Long Beach calling Newsom's closest challenger, Larry Elder, a "Trump clone." Newsom's challengers have also stepped up their campaigns in the final days of the recall election as polling numbers suggest that Newsom will likely get to keep his job.

While the deadline to vote is Tuesday, Californians have had the opportunity to cast their ballot for the last month, or so. Every active registered voter in the state was sent a mail-in ballot, there has been early in-person voting in many places and polls are open on Tuesday until 8 p.m. local time.

The ballot will ask voters two questions: First, should Newsom be recalled (removed) from the governor's office? Second, if Newsom is recalled, which candidate should replace him?

If Newsom is recalled (that's a big "if"), it would likely be conservative talk radio host Larry Elder who would replace the governor. Recent polls show Elder has the support of more than a quarter of likely voters.

For 27 years, Elder, who calls himself "the Sage of South Central," has been a provocateur on Los Angeles radio dials: a Black host who leans libertarian and delights in skewering Democratic politicians and liberal orthodoxy.

He's a vocal supporter of former President Trump and, in response, Democrats have linked the recall effort to Trumpism and to the national Republican agenda on issues like reproductive rights and voting access.

Elder, like the former president, has claimed, without any evidence, that Trump lost last year's election to fraud. "There are all sort of reasons the 2020 election, in my opinion, was full of shenanigans," Elder, said earlier this month. "And my fear is they're going to try that in this election in the recall."

Elder would be the first Black governor in state history, and he's making a play for voters of color, while Black leaders line up to oppose him.

In an interview with member station KPCC, U.S. Rep. Karen Bass, a Democrat who represents much of South Los Angeles in Congress, says Elder's promises around COVID-19, like rescinding mask and vaccine mandates, would put lives at risk.

"The community isn't stupid," Bass said. "People understand where their interests are."

What is the recall effort about?

The effort to recall Newsom began in Feb. 2020, before the coronavirus pandemic had a firm grip in the U.S. The first complaint listed in the recall petition against the governor is that he favors the interests of people in the country "illegally."

But that argument has largely faded into the background as the spread of COVID-19 allowed the campaign to gain momentum. The governor angered Republicans with his public health restrictions, and a judge — due to the pandemic — gave recall proponents four extra months to gather the required signatures to put the question before voters.

Further complaints from the "yes" campaign:

The "no" campaign's main points:

Is the recall constitutional?

The short answer: Federal judges have allowed for the recall election to move forward.

The long answer: Some legal scholars questioned the process in recent weeks because the two-question recall ballot makes it possible for the governor to be replaced by a candidate who earns fewer votes than he does.

That's because the governor — or any elected official facing a recall in California — needs a majority vote in the first question, which asks if they should be removed, to stay in office.

That means if Newsom wins only 49% support in the first question, he will be recalled. His replacement would then be the candidate with the most votes on the second question, even if that candidate wins less than 50%. With 46 candidates on California's recall ballot, it's likely no one earns a majority vote, or even close to it.

In late August, a federal judge declined to stop the recall. The lawyer who brought the suit appealed to the Ninth U.S Circuit Court of Appeals in San Francisco, but a panel of judges declined to halt the election. They will take written arguments through mid-October.

And California voters may be supportive of changing the procedures around recall elections, according to new research out this week from UC Berkeley's Institute of Governmental Studies.

How does this recall compare to 2003?

Every California governor since 1960 has faced a recall attempt, but only two have successfully made it onto the ballot. The process to get there involves signature gathering, legislative approvals and millions of dollars in election expenditures.

The first recall election in the state happened in 2003 when more than 55% of voters decided to remove Gov. Gray Davis months after he was re-elected to a second term. He was replaced with Republican Gov. Arnold Schwarzenegger, who won nearly 49% of the votes on the second question. He then won a full term in office in 2006 when he was re-elected.

Former Gov. Davis, speaking to NPR's All Things Considered, called the recall process, "a game of Russian roulette." It's "fundamentally unfair," he said, because the governor must achieve more than half of the votes to stay in office, while their challengers can win with a small percentage of the vote. (For more on this, see the section above).

Who is on the ballot to replace Newsom?

There are 46 candidates on the ballot looking to replace Newsom, but only a handful are likely to get even a percentage of the vote. Newsom has encouraged those who vote "no" on the first question not to choose a candidate on the second question. Here are the top five names in the most recent polling.

Larry Elder: Elder, a Republican, has brought his libertarian views to the Los Angeles talk radio airwaves for decades, landing a spot on the Hollywood Walk of Fame. Elder says as governor he'd pursue a rollback of the recent gas tax increase, which funds road improvements and transit projects. Elder derided Newsom's efforts to lower greenhouse gas emissions to combat climate change and has vowed to suspend some of the state's environmental regulations to spur development.

Kevin Paffrath: Paffrath, a Democrat, has garnered millions of viewers for his YouTube videos, which share tips for investing in real estate. Paffrath has promised a centrist governorship. In an interview with KQED, he described himself as "51% Democrat, 49% Republican" and lists his top priority as housing all of the state's unhoused residents within 60 days, though details remain scant. Paffrath has also unveiled out-of-the-box proposals such as enlisting prison inmates to clean the state's streets; offering 14-year-olds the opportunity to attend a "future school" that includes a focus on career training; and building an aqueduct to the Mississippi River to bolster California's water supply.

Kevin Faulconer: Faulconer, a Republican, was the mayor of San Diego from 2014 to 2020, making the city the largest in the U.S. to have a Republican mayor at the time. If elected governor, Faulconer says he'll eliminate state income taxes for certain individuals and families in California. Faulconer has also vowed to withhold funds from local governments who don't build homeless shelters and then clear tent encampments. Critics in San Diego accused him of failing to respond urgently to homelessness until 2017, when a hepatitis A outbreak among the city's homeless population killed 20 people.

John Cox: Cox, a Republican, ran and lost decisively to Newsom in 2018. Cox is a millionaire former public accountant, housing developer, lawyer and investment manager who has run for office unsuccessfully in both California and Illinois. As governor, Cox says he would cut income taxes by $30 billion and eliminate wasteful state spending; he's also promised to cut homelessness in half by increasing treatment for, and enforcement against, unhoused people who refuse help, and vowed to build more housing by cutting red tape and regulations. Cox's plans are light on specifics.

Caitlyn Jenner: The Republican reality TV star — a former Olympian most recently known for her turn on Keeping Up With the Kardashians — is promising to focus on cutting red tape and regulations, and says she would veto any tax increase. She's also attacked Gov. Newsom's COVID-19 response, pledging to make sure schools and businesses are fully open if she's governor. Jenner has spent much of the summer in Australia filming a reality TV show and has drawn heat for her apparent lack of understanding when it comes to the fundamentals of running government.

Like other elections in California, the race may not be decided on election night if there are still a large number of outstanding mail-in ballots. Election experts say it's impossible to predict exactly when the race will be decided. If it's a landslide, we might know within hours of polls closing, but a close contest could mean weeks of hand-wringing as late-arriving mail ballots are counted before a winner is declared.

Counties must finish counting ballots and certify their results by Oct. 14. The California secretary of state will certify the results on Oct. 22. If the governor is recalled, he will need to vacate the office by that date and the winning replacement candidate will be sworn in.

If Newsom is recalled, his replacement will finish the rest of his term, which ends in early 2023. They would have to run for re-election in 2022 if they want to stay in office after that.