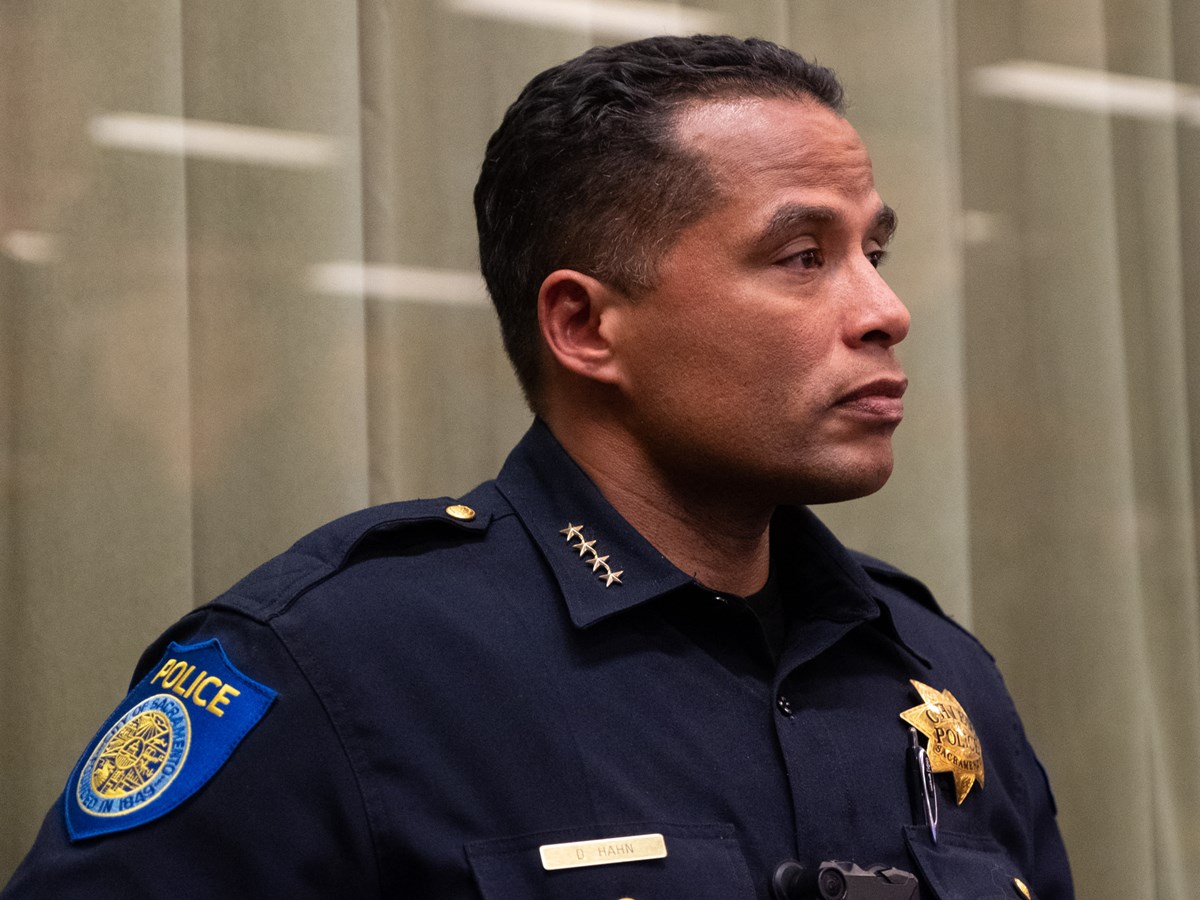 Sacramento Police Chief Daniel Hahn waits in the back of city council chambers for his turn to speak, March 5, 2019.

Sacramento Police Chief Daniel Hahn announced on Twitter Wednesday that he will retire at the end of this year, just four years after being sworn into the position.

Today, I submitted my intention to retire at the end of this year (2021) to City Manager Howard Chan. On this date (August 11th), four years ago, I stood with my mother, along with our community, and was sworn in as the police chief of my hometown. @SacPolice #BeTheDifference pic.twitter.com/UBhoPuWQlg

The Sacramento native was raised in Oak Park and came up through the ranks of the Sacramento Police Department over 23 years before leaving to become chief of police in Roseville. He returned to Sacramento after six years  and was sworn in exactly four years ago — August 11, 2017 — as the department's first Black chief.

"Serving as the police chief in the City I was born and raised has been the highest honor of my professional career," Hahn wrote in a tweet. "Now on to the search for new professional challenges."

Hahn did not give a reason for his decision.

Mayor Darrell Steinberg tweeted his congratulations to Hahn on his career.

“We have been fortunate to have a police chief who understands and loves the community, has the respect of [the Sacramento Police Department] and its officers & has not been afraid to push for needed change,” Steinberg said.

Hahn succeeded former police chief Sam Somers Jr., who retired in 2016 after two of his police officers shot and killed Joseph Mann, a mentally ill Black man whose death led to transparency changes within the department.

In his four years in the position, Hahn oversaw the department’s response to the police killing of Stephon Clark, a 22-year-old Black man who was shot in his grandmother’s Meadowview backyard. Hahn was criticized for his handling of the protests that followed, one of which led to more than 80 people being arrested during a demonstration in the wealthy East Sacramento neighborhood.

But he was praised by others for making changes in the department following Clark’s death. Hahn himself has touted new transparency measures, improved community relations, and the use of new technology like robots, drones and a new virtual reality simulation training for officers.

Still, Hahn will leave a police department that largely mirrors what it was when he walked in: white dominated and often accused of racial bias and discrimination.

In July, a report released by the department revealed that Sacramento Police officers stopped, searched and used force against Black residents at significantly higher rates than white people.

“I don't think people expect for a department with well over a thousand members, that every person is perfect, that nobody makes mistakes,” Hahn told CapRadio in a July interview. “There's some human beings that slip through the cracks and are fallible.”

In the Sacramento Police Department, about 70% of officers are white. Just 5% are Black.

Since 2017, the year Hahn was sworn in, Sacramento police officers shot, killed or used excessive force in at least 50 reported incidents, according to the department’s records.