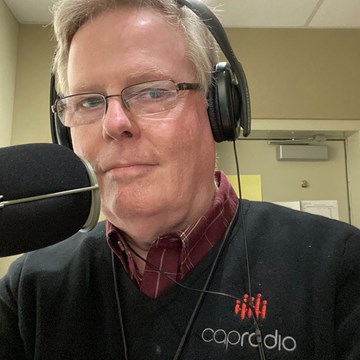 Mike is a native Californian, born in Los Angeles. But in the years just before Mike’s birth, his parents lived in Sacramento, made many friends here, and Mike spent a week of every summer as a child in Sacramento when the family would come to visit. He grew up on ice cream from Vic’s and Gunther’s and movies at the Crest and Tower.

After his father died when he was 8, he and his mother moved to Bishop, in the Owens Valley, where members of his extended family have lived since 1920.

He began his career in radio in Bishop when he was 15 and worked in San Luis Obispo and Ukiah before leaving California for Reno, where he spent seven years, and transitioned from radio to TV.

After a 30-year career in TV news in Reno, Las Vegas and Phoenix, Mike returned to radio doing traffic reports for several western cities and national newscasts for the iHeartRadio app.

In 2013, he came home to California, and worked as Morning News Editor for KFBK in Sacramento. In 2014, Mike was one of the winners of the Bill Stout Memorial Award for Excellence in Spot News Radio and the Murrow Award for Breaking News Coverage. Over the next six years, he was promoted to Executive Producer, Managing Editor, Assistant News Director, News Director and Afternoon Co-Anchor.

Mike joined CapRadio in 2020 as interim anchor for both All Things Considered and Morning Edition and anchored special coverage of the 2020 election.

Mike has also been writing about cars since 1997 for outlets including the BBC and several AAA auto club magazines. Currently, his car reviews appear on his own website, MikeHagertyCars.com, and in the Los Altos Town Crier. Mike is Executive Vice President of Western Automotive Journalists, the guild for automotive writers in Northern California.

Mike and his wife, Dr. Rhonda Hagerty, an educator, live in Folsom.