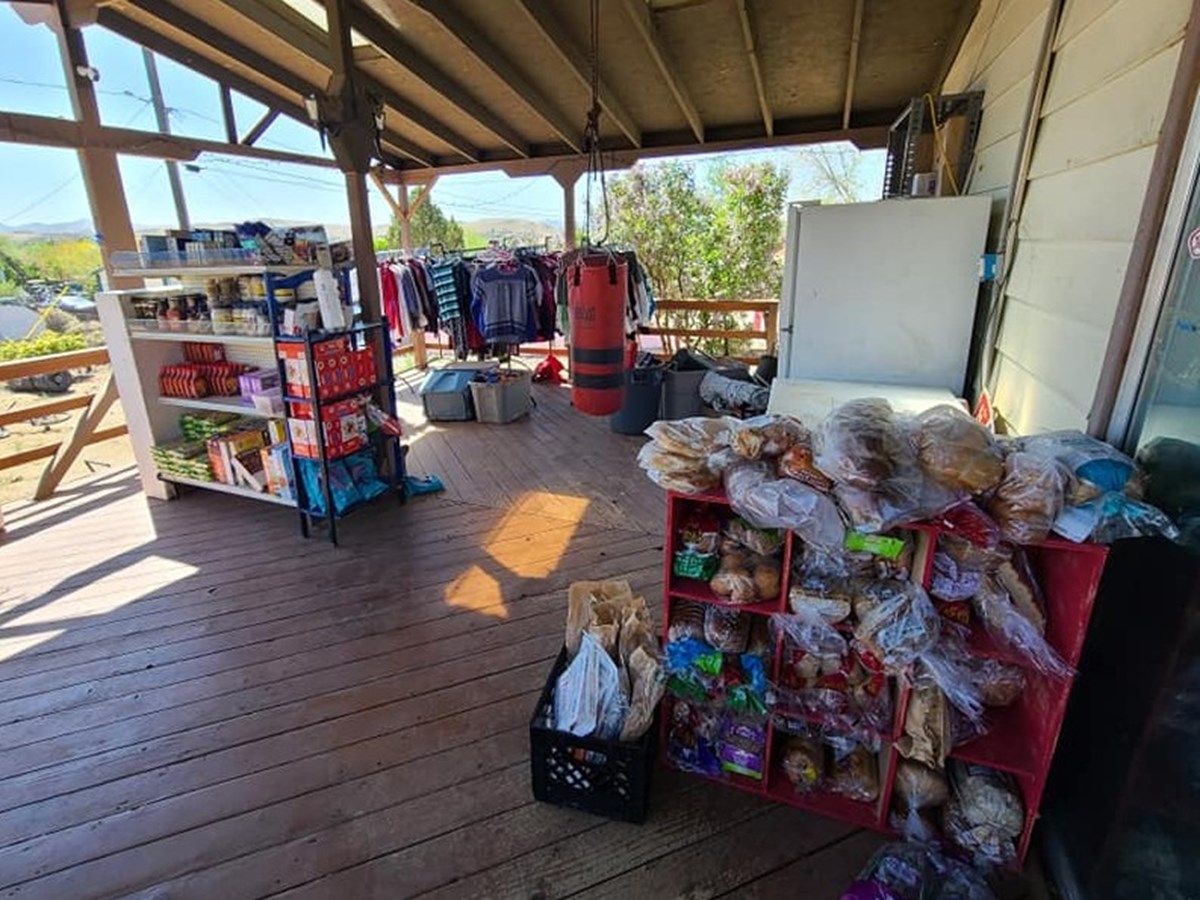 The Sun Valley Karma Porch north of Reno, where Jennifer Elliott distributes free food and other necessities for neighbors in need out of her home.

Meghan Simons saw last March the need for an online space where people could find help getting toilet paper and information about the latest COVID-19 mitigation measures. The pandemic had just arrived in Nevada, triggering business closures and widespread uncertainty.

So Simons started the Reno/Sparks Mutual Aid Facebook group. More than a year later, it continues to add members: By early July, more than 5,500 people had joined.

“I thought, ‘Wouldn’t it be great if there was a hub where people could post this information for others,’” she said of the Facebook group. “And it gradually grew from there… Now it’s a genuine community assistance hub.”

Simons was just one of many everyday Nevadans who stepped up during the crisis to support their neighbors reeling from the pandemic’s devastating impact on public health and the economy. As public agencies in Nevada struggled to deal with the impact of COVID-19, grassroots mutual aid efforts popped up around the state to fill in the gaps left by the government response.

Even before the pandemic arrived, local officials were already grappling with an affordability crisis caused by slow housing construction in the wake of the Great Recession and a sudden population boom driven by thousands of new jobs at the nearby Tahoe-Reno Industrial Center, where Tesla’s Gigafactory is located.

Simons attributes the group’s popularity to mounting pressure on a community that used to be an affordable place to live, but where the rising cost of living has outpaced local incomes.

“It was born of COVID, but it was also born of a huge need here in Northern Nevada for some kind of network to help people get connected to services,” she said.

In early 2020, the state had just been starting to recover from the disastrous impact of the Great Recession, which sent income inequality soaring. Within a few months of the COVID-19 pandemic arriving in Nevada, all that progress was erased.

Meanwhile, state lawmakers were still at their day jobs, since they only meet for legislative sessions every two years.

According to University of Missouri political science professor Peverill Squire, the part-time legislature put Nevada at a disadvantage when compared to states like California, where leaders weigh policy year-round.

“You wouldn’t have expected the state legislature to be able to respond very quickly to something that hadn’t been forecasted,” he said. “Particularly in a year when they were not scheduled to be in session.”

Squire said Nevada’s reliance on short-notice policymaking during the crisis may have added to the uncertainty.

“It’s disruptive both for state government and for the lives of the legislators themselves to get called into special sessions,” he said.

Simons said lawmakers should’ve done more — especially since the number of people asking for help online still hasn’t gone down, even though the state has reopened its economy.

Jennifer Elliott agreed, because she saw the impact of COVID-19 in person.

“There has been a need for many years, actually,” she said. “And it definitely spiked during the pandemic.”

Elliott runs a food bank out of her home north of Reno called the Sun Valley Karma Porch. She started helping feed her community before COVID-19 arrived. But as the pandemic worsened, she got busier than ever.

“We handed out like, a couple hundred thousand pounds of food over the last couple years,” she said. “The numbers are just inconceivable for me.”

In Las Vegas, food writer Kim Foster started her own food distribution operation on the sidewalk in front of her family’s house. In a recent interview with KNPR’s State of Nevada, she described a bewildering new reality for neighbors who were laid off in the pandemic’s early days.

“We have a lot of families who had never been broke before,” she said. “Unlike families who were used to experiencing some level of insecurity, we had a lot of folks who didn’t know where to go for boxes of food.”

In response, Foster says members of the community stepped up, even when they were struggling themselves.

Looking ahead, community organizers say they don’t see any signs of relief on the horizon. Instead, they predict the level of need to increase when the federal eviction moratorium expires at the end of July.