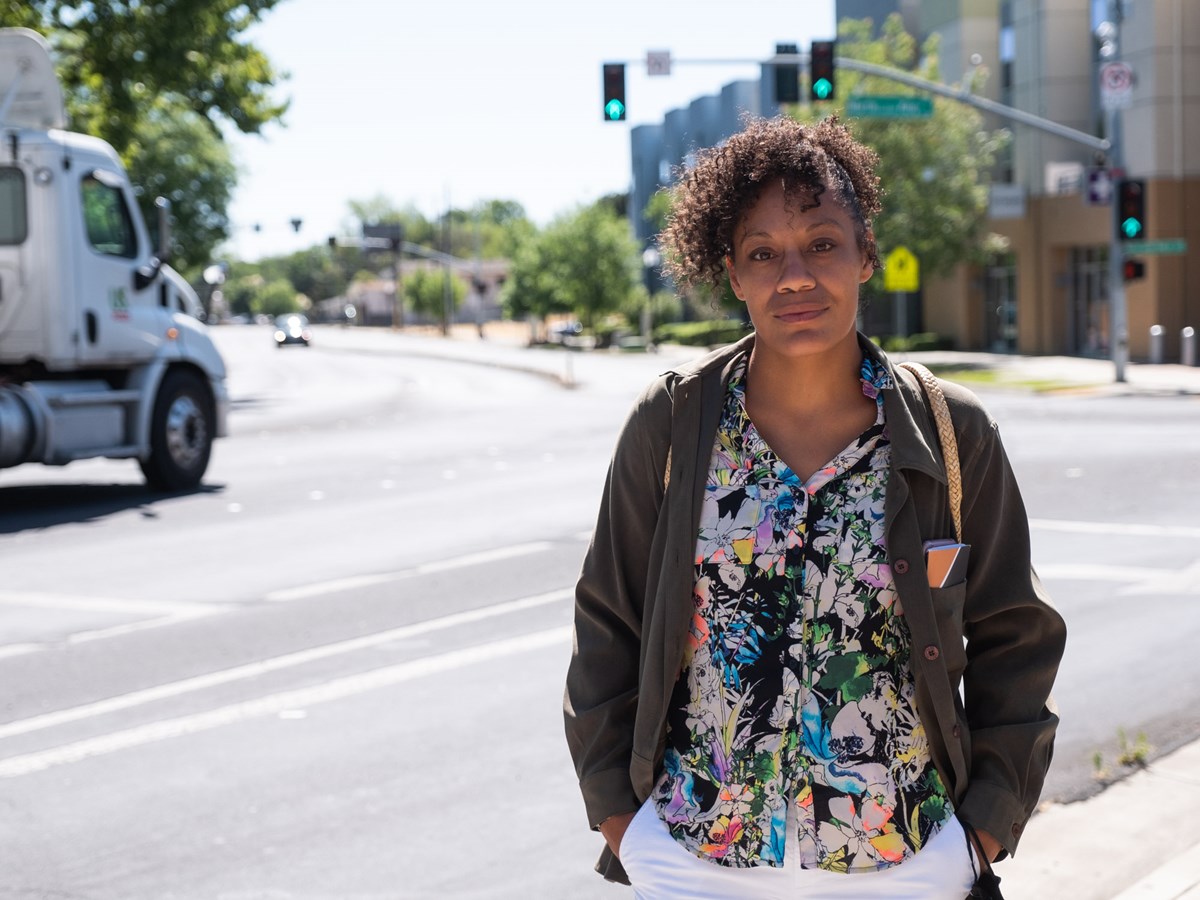 Kiara Reed stands near the corner of Martin Luther King Jr. Blvd and Broadway in Sacramento where a device measuring air quality is installed on a nearby rooftop, Tuesday, June 8, 2021.

At the intersection of Martin Luther King Jr Boulevard and Broadway in Oak Park, Kiara Reed pointed out a few markers of bad air quality.

“It’s busy, right,” Reed, the director of the nonprofit WALKSacramento, asked over the din of traffic and honking. “There’s a lot of cars going down even as we’re here. There’s big trucks that we’ve seen come down this area, we’re not too far from the freeway here.”

This corner is one of 20 sites in the Oak Park area and north Sacramento slated to receive air quality monitors over the next few weeks. The air monitors look like small solar panels and will be installed on the rooftops of businesses in areas that were selected by residents.

WALKSacramento, in partnership with Valley Vision, Breathe CA and Green Tech Education, are leading an effort to engage lower-income communities who are at risk because the areas in which they live lack tree cover, experience heavy truck traffic and are in close proximity to freeways — all of which can lead to poor air quality.

The city of Sacramento conducted a study of trees in the city in 2018. It found that underserved neighborhoods in south and north Sacramento were less likely to have dense tree cover. Their analysis also found greater tree density led to better air quality and helped reduce stormwater runoff.

Studies have shown that poor air quality can lead to negative health impacts like higher rates of asthma and chronic lung issues.

The hope is that with these monitors installed, residents will be able to check their air quality on a website, and then use these readings to push for greater policy change.

The project is being done in tandem with the state’s Community Air Protection program, which was created after Gov. Jerry Brown in 2017 signed Assembly Bill 657, which was created to reduce non-vehicular air pollution and health risks.

One of the very first efforts at community air monitoring was started in West Oakland in 2012. Since then, West Oakland residents have pushed for changes like diverting truck routes away from residential areas, adding more electric vehicles to the roads and working with industrial sources to reduce their emissions.

Adrian Rehn, the project lead at Valley Vision, said he hopes residents in Sacramento will be able to do the same. 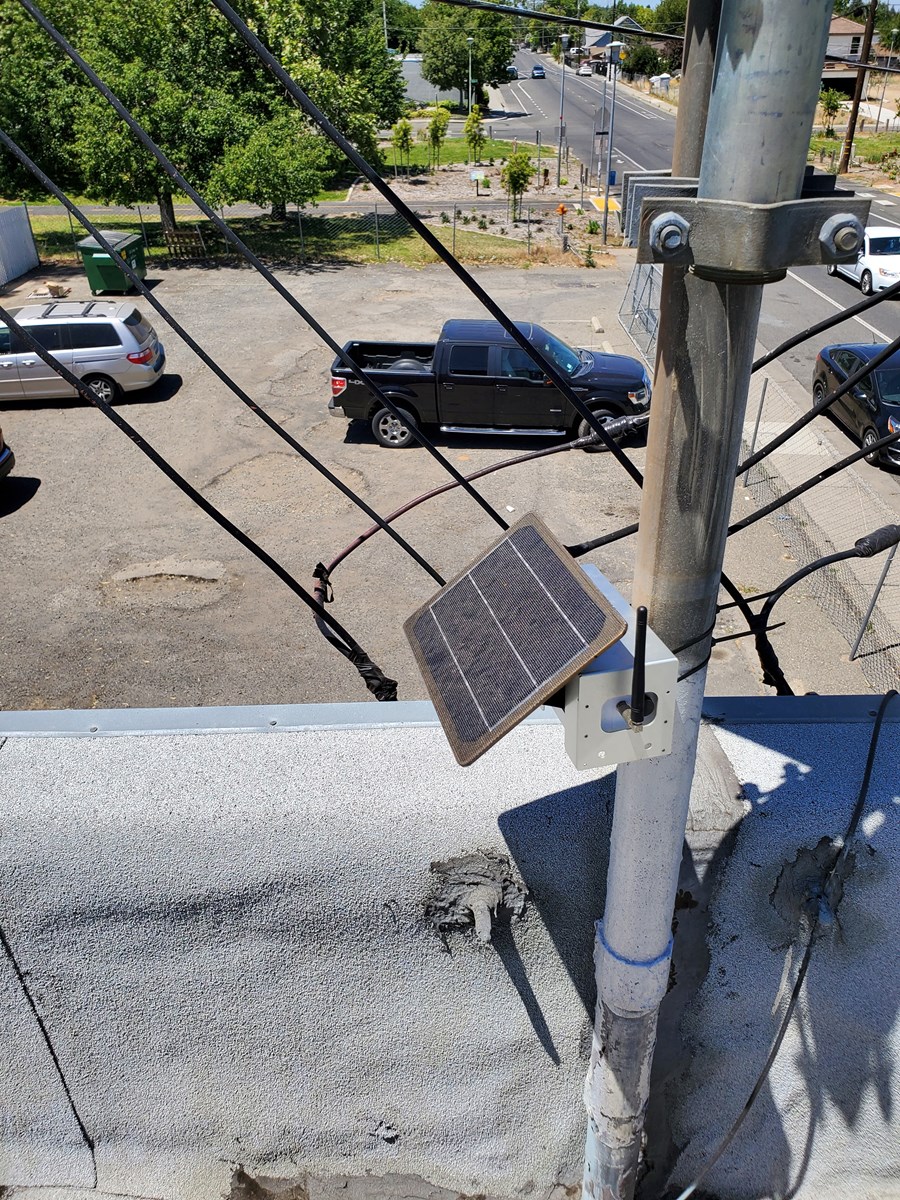 North Sacramento and Oak Park were selected because they were neighborhoods with high exposure to pollution. But they were also neighborhoods that didn’t have many air quality monitors through other sources, like Purple Air.

For Vincent Payne, a Del Paso Heights resident who helped determine where air monitors in his neighborhood would go, air quality impacts many of the everyday decisions he makes.

“I’m an avid runner, and sometimes I run downtown just because I feel like I want to see large trees,” Payne said. “I sometimes choose not to run in the North Sacramento area because of the fact that there’s not large mature trees and the air itself.”

He hopes that gaining more information about the air quality where he lives will lead to more green spaces in his neighborhood.

May Yang is another Del Paso Heights resident who helped with placing monitors in north Sacramento. She said she has lived in the neighborhood for 17 years and has suffered from direct health impacts of the poor air quality.

“The air quality has gotten so bad, even in my own family,” Yang explained. “I have family members that have really bad asthma that never had asthma before.”

Yang’s experience is not unusual. Studies have shown that asthma rates among Black and Latinx communities, as well as people who live in disadvantaged communities suffer from higher rates of asthma.

She hopes that lawmakers will consider diverting traffic from certain areas and away from schools, where she says her children have had lung issues like chronic bronchitis.

“Especially in the summer when it’s really hot and we don’t have enough trees to even shade us or give us proper oxygen,” Yang said. “Because we’re so crowded with these major highways, you can just tell with your breathing, it’s crazy, you can just smell it in the air.”

The air monitors are set to be fully operational by the end of June. Once they’re installed, residents will be able to check a website to see real-time readings in their neighborhood.