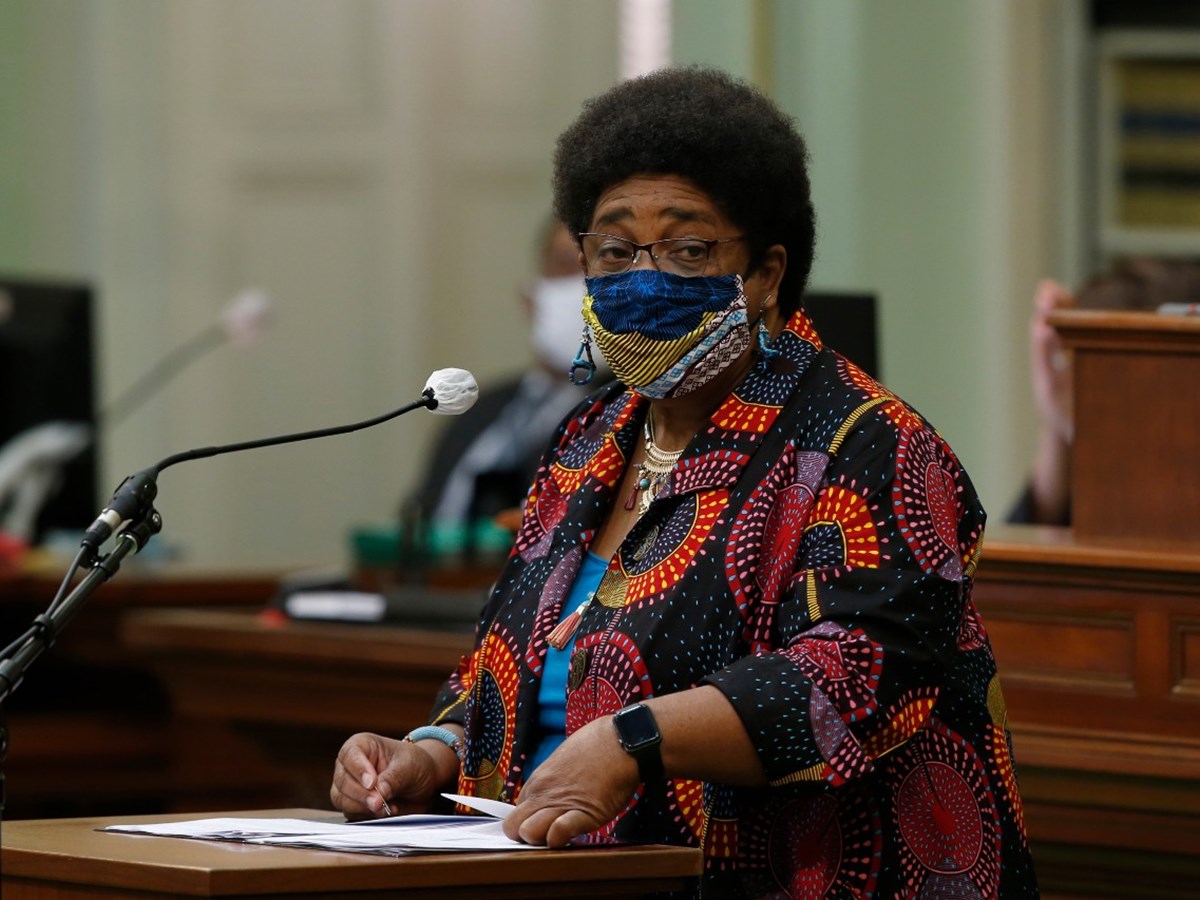 In this June 11, 2020, file photo, then-Assemblywoman Shirley Weber calls on lawmakers to create a task force to study and develop reparation proposals for African Americans, during the Assembly session in Sacramento, Calif.

Hundreds of years after slavery ended in America, a California task force of legislators, lawyers and civil rights leaders will begin studying how to pay Black people reparations. The nine-person task force was created following last summer’s social justice uprising in response to the police murder of George Floyd in Minneapolis.

Secretary of State Shirley Weber, who authored Assembly Bill 3121 last year when she was part of the state legislature, said the work is built on an understanding of the persistent systemic racism and continued government exploitation of African Americans as a result of slavery.

“Some have asked us, ‘Why in California? Why not somewhere else? Why not do it in the south,’” Weber said during the task force’s first public meeting. “We came to understand very clearly that California has the ability and power to do it. And if not us, then who?”

The task force will also compile documentation on the institution of slavery — its past and present impact — and will educate Californians on its findings. Proponents say they hope the task force will become a model for the United States government.

At the federal level, H.R. 40, which was introduced in 1989, could finally be considered by Congress and would similarly establish a commission to examine federal reparations.

The California task force’s first meeting was on the centennial of the Tulsa Race Massacre, during which white Americans killed Black Tulsans and destroyed the affluent African American Greenwood District, also known as Black Wall Street.

Weber said Tulsa was not an anomaly.

“What does it feel like to be in a country where you're continually abused, misused, ignored and no one ever stops and says, ‘Gee, we were wrong,’” she said. Weber added that task force must “determine the depth of the harm and the ways in which we are to repair that harm.”

Moore, who studied the links between international law and reparatory justice for descendants of chattel slavery at Columbia Law School, was appointed as chair. Brown, long-time pastor at the Third Baptist Church of San Francisco and student of Martin Luther King Jr., will be her vice chair.

“I'm looking forward to ensuring that any reparations package that the task force develops fully comports with international law, which mandates reparations come in the form of compensation, restitution, rehabilitation, satisfaction and guarantees of non-repetition,” Moore said.

A number of people during the first meeting called for the task force to explicitly commit to proposing cash reparations to Black descendants of American descendants of slavery. Some also opposed task force member Lisa Holder’s emphasis on “symbolic stories that will win hearts and minds,” noting that symbolism wouldn’t pay bills or materially support Black Americans.

Marcus Champion, a board member for the National Assembly of American Slavery Descendants Los Angeles (NAASDLA) and the Coalition for a Just and Equitable California (CJEC), said that he expected the task force to support reparations in the form of cash payments along with class protections and programs to combat the racial wealth gap.

“The remedies are, on the whole, symbolic and the solutions are generalized and don’t take into account the needs of the community,” Champion said. “We need to be righting this historic wrong.”

The next public hearing will be in July and will cover the themes and contents of the two-part report the task force will produce.

Correction: A previous version of this story misstated the organizational affiliations of Marcus Champion. He is a board member of the National Assembly of American Slavery Descendants Los Angeles (NAASDLA) and the Coalition for a Just and Equitable California (CJEC).